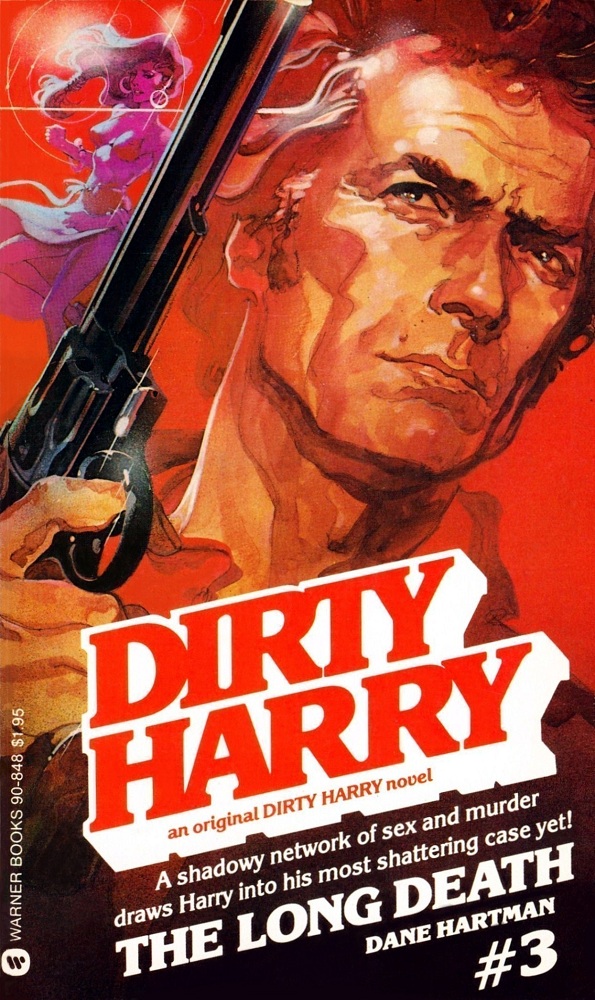 Someone is grabbing young women from the bars, campuses, and streets of San Francisco and doing unspeakable things to their minds and bodies. Someone is setting up cops against black nationalists in a violent inter-city war, playing both sides for bloody fools. Someone is looking for deadly trouble when a gorgeous policewoman baits “Dirty Harry” Callahan into a showdown that can only be settled by bare fists and Magnum lead!

The flames seemed to roar out of the window in anger after Harry as he plummeted sixteen feet to a side incline. He slammed against that, rolled down, hit another inclined roof right below that, and fell into a pile of sand that had collected against the side of the house. Harry didn’t know the extent of his injuries, but he did know he wasn’t dead.

Hands plucked at him. They rolled him over. Harry saw figures in blue and yellow uniforms. The cavalry had arrived. He was carried out to the safety of some ambulances across the street. He felt tired. He didn’t feel good. The last thing he saw that day was the face of Captain Avery looking down at him with concern.

Harry laughed himself into unconsciousness . . .

To Robert Bishop, who doesn’t have to draw a picture to really know the ropes.

S
he had always been proud of her feet. Many beautiful girls had reason to be pleased with their bright eyes, their aristocratic noses, their full lips, their handsome lungs, their smooth ivory hips, their long legs, or their lustrous hair, but Barbara had been proudest of her feet. She had been proud because quite often it was the feet that threw off the perfection of an otherwise gorgeous girl.

As curvaceous and striking as a girl might think herself, very few appreciated their feet. Either there were too many veins along the top or their soles were too rough or their nails weren’t right or, as in most cases, the toes would have the wrong symmetry. Either the second toe was longer than the big toe or the middle toes were too bumpy or the little toe was all scrunched up.

Not Barbara though. Barbara’s feet had been perfect. They were small, delicately shaped, and the toes lined up like the King Family children—all blond, pearly, and in perfectly diminishing height. Barbara had rarely been more excited than when she placed her terrific feet into a pair of strong hands for a massage. She hadn’t done it for a while, of course. There were very few strong hands she would trust with her feet at the University of California at Berkeley. It seemed as if all the summer courses were being taken by either wimps or fairies. All the good hands were sunning themselves at the beach.

Barbara had promised herself and her feet a little sojourn by the bay. She had told herself that the very next weekend would be spent socializing. There was no reason she’d have to bury her pert little nose in the books all the time. She would pack her tight, sleek form into a bright maillot and do a little advertising, she decided. Yes, the very next weekend

But now it was too late.

Her breath came in tortured gasps through lips that used to be rosy smooth. Her eyes, which had been the clearest blue, were now bloodshot, wild, and watery. She could hardly see where she was stumbling. At least her hair was not in her eyes. It used to be that she would constantly shrug or push her long blond hair out of her way. But now her hair was almost gone. There was just a close-cropped yellow halo around her head. She didn’t look like Barbara Steinbrunner, the nineteen-year-old “Snow Queen” of Berkeley. With all the welts across her body and the rude haircut, she looked positively punkish.

The outfit didn’t improve the image. Her tight jeans, the Frye fashion boots, and the black turtleneck sweater which had shrunk, exposing some of her midriff, were gone. They had been ripped off long ago. Instead she wore a hospital gown. One of the embarrassing ones that tied in the back and was too short. She looked like a missing member of the Sex Pistols

Finally, the rain didn’t help. It was a San Francisco summer shower—pelting her with cold, liquid gravel at 1:40 in the morning. Naturally Barbara didn’t know what time it was. Her time had stopped. Ever since the two figures had emerged from the bushes near a campus utility shed in what seemed like eons ago.

She hadn’t seen the men, but she did notice the thick, dark foliage around the small shack. It didn’t register immediately, but she also saw an unusual shadow near the usually locked shed door. It made the doorway look wider. Only afterward did she realize that it only looked wider because the door was ajar.

They had come at her from two sides. The first grabbed both her arms just above the elbow and pulled. She fell back into him, but he kept pulling. Any initial cry she might have made was knocked out of her by the force with which her back hit his rock-hard torso. She was quickly collecting her breath to scream when the shadow of a second assailant loomed in front of her. She saw his arm move, then felt a horrible pressure across her stomach. What would have been her second cry came out of her mouth as a scraping wheeze.

She doubled over in pain, her mouth wide open and her arms straining forward. The grip above her elbows remained tight, so all her arms could do was wave weakly from side to side. Before the horror clamped over her head, she felt her fingers fluttering helplessly, like the dying wings of a butterfly caught in a spider’s web.

Then the figure in front of her moved again. Next thing Barbara knew, a thick plastic sheet was covering her face. Before she could turn away, she heard a click, and the unctuous black goo attached itself to her head. It sucked onto her face like a leech, fastening her expression into place. She couldn’t open her eyes, she couldn’t close her mouth. Worst of all, she couldn’t breathe.

As hard as she inhaled, no air could pass through the black plastic. She violently shook her head, but it was stuck to her face like a vise. She was then thrown forward so her arms were free. But before she could raise them to rip the thing from her face, another pair of arms wrapped around her torso, pinning her limbs to her sides.

She was lifted, carried a few steps, and dropped. She fell on her side, her arms out in front of her. The pain of her fall was inconsequential—all sensation had fled, replaced by the panic-ridden void of asphyxiation. She was suffocating, and she had to get the horrible clinging thing off her face.

Her hands moved unerringly toward her head. They were just about to touch the plastic when two other rough hands gripped her wrists. With a socket-wrenching jerk, her arms were pinned behind her back. She slammed over on her stomach. A knee nailed her there. She felt something soft and satiny slip over her hands. They felt like the softest of leather gloves. Then there was a tight, momentarily painful stricture at her wrists. Another sudden tug and her hands were together, palm to palm, and her arms making a tight “V” straight down her back.

It was a strange floating sensation. In just a few seconds her entire upper body was immobilized. It was as if she had been paralyzed from the waist up. She felt like she was floating. She was just about to enjoy the feeling when she realized it was because she was dying. She suddenly remembered reading about the death euphoria in psychology class with crystalline clarity. When air to the brain ran out, cells started to die, creating a feeling of dizzying rapture. Like when she was high.

Life had suddenly taken on an extra dimension, a sharpness it hadn’t had before. She could feel every individual blond hair that was caught between her face and the tight plastic mask. She could feel the rocks and ground along her front. She could practically feel the men’s fingerprints as they worked on her arms. She had a quick, last coherent thought. She was going to die with her mouth open.

Imaginary Men by Anjali Banerjee
Under Seige by Catherine Mann
Dead Wrong by Cath Staincliffe
B00DW1DUQA EBOK by Kewin, Simon
Exposed by Liza Marklund
The Sheriff of Yrnameer by Michael Rubens
1 A Spirited Manor by Kate Danley
Deadfall by Anna Carey
The Iron Thorn by Caitlin Kittredge
The Countess by Lynsay Sands