Read Do Not Forsake Me Online

“Something you need, ma'am?”

“I believe I offered you a position. I need your decision.”

He swallowed, taking his time, hoping he wasn't about to make a big mistake. “I'll take the workâas a hand, not as your foreman.”

“I don't understand why you wouldn't want to take a position that will pay more.”

He thought about everything that Eduardo had told him the night before. “It's not my place to offer you advice, miss, but seems to me that Mr. Turnbull wants to come back. Don't you think it might work out better for you having him here than over working for the Tiptons?”

Her eyes narrowed as she studied him. “Mr. Turnbull is none of your business. The question is will you stay on.”

He shrugged. “For a while.”

“I need people I can depend on, Chet.”

She scowled up at him. “Does that mean I can trust you to be here when we need you?”

He allowed himself the pleasure of looking her over for a long moment. “Can't say, ma'am. Only you can decide if you trust me or not. It means I'll work hard for as long as I'm here.” He realized he was wearing his hat and snatched it off his head. “I do thank you for the chance to work, Miss Porterfield. I won't let you down.”

She studied him for a long moment, squinting up into his eyes as if trying to decide whether or not to believe him. Then she brushed past him on her way back to the house. “We'll see about that,” she muttered.

He slowly began to smile as he watched her go.

Thank you for reading
!

At Sourcebooks we are always working on something new and exciting, and we don't want you to miss out.

So sign up now to receive exclusive offers, bonus content, and always be the first to get the scoop on what's new!

At twenty, Miranda Hayes has been widowed by the Civil War and orphaned by a vicious band of rebel raiders. Alone on the harsh, unyielding frontier, Miranda is surprised to run into the notorious gunslinger Jake Harkner, a hard-hearted loner with a price on his head. Suddenly Miranda finds within herself a deep well of courageâ¦and powerful feelings of desire she's never known.

Hunted by lawmen and haunted by his brutal past, Jake has spent a lifetime on the dusty trail and on the runâ¦until he meets a vibrant, honey-haired beauty who is determined to change his violent ways. But does she love him enough to risk her life to be his womanâan outlaw's woman?

“Bittner has a knack for writing strong, believable characters who truly seem to jump off the pages.” â
Historical Novel Review

She's a woman with a secret

Elizabeth Wainright is on the run. Accused of a murder she didn't commit, she has no choice but to cut ties with her old life and flee west. The last thing she wants is attention, but when her stagecoach is attacked, she suddenly finds herself under the fierce protection of one of Montana's famed vigilantesâ¦whether she likes it or not.

He's a man with a code

Lawman Mitch Brady is sworn to uphold justice in the wild lands of 1860s Montana. He's never met a man he's feared, and he's never met a woman more desperately in need of his help. Something's shaken the secretive Elizabeth, but as he gets to know the beautiful city belle, he finds the only thing he wants more than her safetyâ¦is her trust.

“One of the most powerful voices in Western romance.” â
RT Book Reviews

Maggie Tucker has just gone through hell. Outlaws murdered her husband, looted their camp, and terrorized Maggie before leaving her lost and alone in the wilds of Wyoming. She isn't about to let another strange man get close enough to harm her.

Sage Lightfoot, owner of Paradise Valley ranch, is hunting for the men who killed his best ranch hand. But what he finds is a beautiful, bedraggled woman digging a grave. And pointing a pistol at his heart.

From that moment on, Sage will do anything to protect the strong-yet-vulnerable Maggie. Together, they'll embark on a life-changing journey along the dangerous Outlaw Trail, risking their livesâ¦and their love.

“A wonderful, absorbing read, with characters to capture the heart and the imaginationâ¦ it's a romance not to be missed.” âHeather Graham on
Outlaw Hearts

Award-winning novelist Rosanne Bittner is highly acclaimed for her thrilling love stories and historical authenticity. Her epic romances span the Westâfrom Canada to Mexico, Missouri to Californiaâand are often based on personal visits to each setting. She lives in Michigan with her husband Larry and near her two sons Brock and Brian, and three grandsons, Brennan, Connor, and Blake. You can learn much more about Rosanne and her books through her website at
www.rosannebittner.com
and her blog at
www.rosannebittner.blogspot.com
. Be sure to visit Rosanne on Facebook and Twitter! 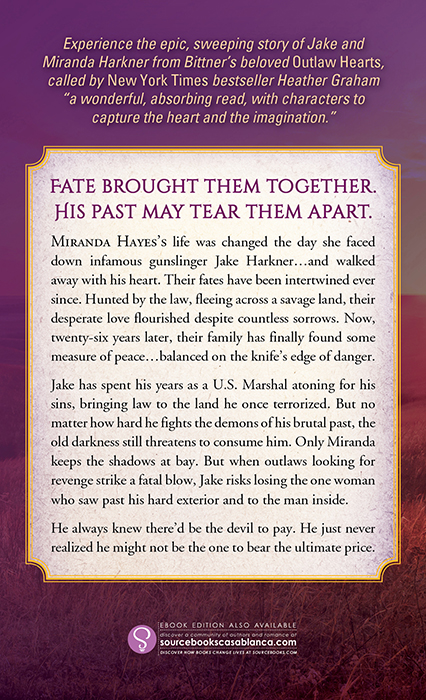 Dust of Snow by Indra Vaughn
Blue Jeans and a Badge by Nina Bruhns
Love: Classified by Jones, Sally-Ann
What You Really Really Want by Jaclyn Friedman
BETWEENMEN by Tavish
Renown of the Raithlin: Book One of the Raithlindrath Series by Ryan, Robert
I Hate to Leave This Beautiful Place by Howard Norman
Enemies: A History of the FBI by Tim Weiner
The Windup Girl by Paolo Bacigalupi
RECKLESS AND WILD: MOTORCYCLE CLUB ROMANCE BOX SET by Honey Palomino