Read Doctor Who - I Am a Dalek Online

Doctor Who - I Am a Dalek 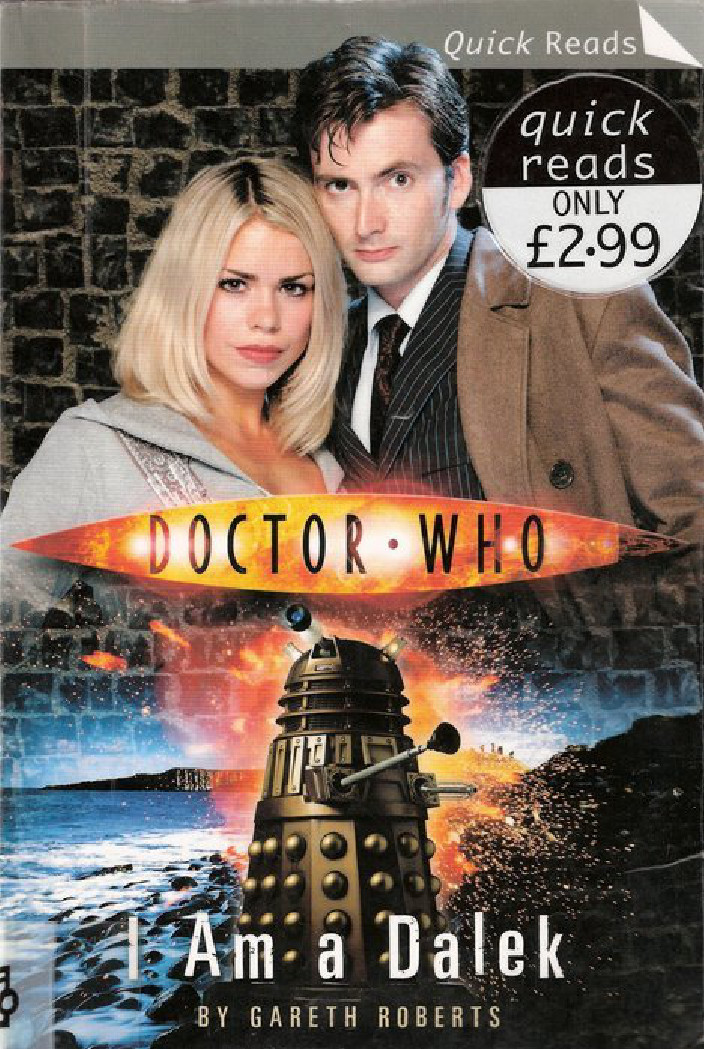 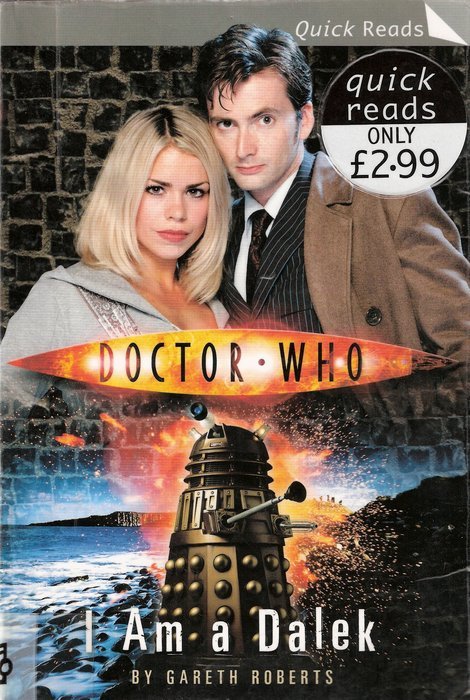 Equipped with space suits, golf clubs and a flag, the Doctor and Rose are planning to live it up on the Moon, Apollo-mission style. But the TARDIS has other plans, landing them instead in a village on the south coast of England; a picture-postcard sort of place where nothing much happens. . . until now.

Archaeologists have dug up a Roman mosaic, dating from the year 70

AD. It shows scenes from ancient myths, bunches of grapes – and a Dalek. A few days later a young woman, rushing to get to work, is knocked over and killed by a bus. Then she comes back to life.

It’s not long before all hell breaks loose, and the Doctor and Rose must use all their courage and cunning against an alien enemy – and a not-quite-alien accomplice – who are intent on destroying humanity.

Featuring the Doctor and Rose as played by David Tennant and Billie
Piper in the hit series from BBC Television.

I Am a Dalek

‘Doctor Who’, ‘TARDIS’, ‘Dalek’ and the Doctor Who logo are trademarks of the British Broadcasting Corporation and are used under licence.

All rights reserved. No part of this book may be reproduced in any form or by any means without prior written permission from the publisher, except by a reviewer, who may quote brief passages in a review.

This book is a work of fiction. Names, characters, places and incidents are either a product of the author’s imagination or used fictitiously. Any resemblance to actual people living or dead, events or locales is entirely coincidental.

Typeset in Stone Serif by SX Composing DTP, Rayleigh, Essex Printed and bound in Great Britain by Bookmarque, Surrey For more information about this and other BBC books, please visit our website at www.bbcshop.com

ROSE CHECKED THE SEAL on her space helmet, then she looked across the TARDIS controls to the Doctor.

‘Turning off the air,’ he said, his white-gloved hand flicking one of the many switches on the panel. His voice reached Rose through a two-way radio link built into their helmets. ‘Turning off the gravity.’

He flicked another switch and smiled over at her. Then he remembered something. ‘Oh – and balance pressure,’ he added, flipping another control. ‘Because we don’t wanna burst. Going up, Mary Poppins.’

Rose felt the weight leave her body and reached out to steady herself on the edge of her side of the panel. ‘Can’t believe it,’ she said.

She cast a glance to the police box doors, imagining what lay outside.

‘Walking on the moon.’

‘More like leaping,’ said the Doctor happily. To demonstrate, he put one foot forward and let himself be carried through the vacuum, landing with the grace of a ballet dancer a good fifteen feet away. ‘Practise, then,’ he told Rose. ‘You don’t want to fall flat on your backside out there. Leap!’

Rose let go of the panel and followed his example, remembering to push gently, and landing only a little less expertly right next to him.

‘Giant leap. And leap!’ the Doctor encouraged her, and they set off, floating and bumping around the TARDIS together.

Rose grabbed one of the wall struts, kicked off and made a perfect cartwheel, watching the large room circle around her.

The Doctor beamed at her. ‘Got it? Good.’ He reached for a long white pole and a battered old bag that he’d tied to one of the floor plates before turning off the gravity. From the bag he produced a long line of string with flags of all the nations strung along it. ‘The bit we’ve landed on won’t be explored for a few thousand years, so let’s give ’em 1

a shock when they get there.’ He looked along the line, considering, and halted at a green and blue flag with a thick black and yellow stripe along the middle. ‘Tanzania?’ he said mischievously. Then his eyes lit on the next flag along, which featured a crest and the initials WI. ‘No, gotta be this! Women’s Institute.’ His face fell just for a second. ‘We can’t.’ Then he smiled again and attached the flag to the pole. ‘We can! And did those feet, in ancient times, walk upon the moon’s mountains green? That’ll keep a few historians in jobs in the forty-ninth century.’

The abandoned string of flags hung in the air before Rose’s face.

Suddenly the importance of what was about to happen struck her.

‘Wait a sec,’ she told the Doctor, halting him with a hand to his shoulder as he made to leap for the doors. ‘I’m gonna be the first woman on the moon. I know I’ve been a lot further, but that’s amazing. The moon, you never think about it, it’s just. . . up there. And now I’m on it.’ She studied his face. ‘I bet you think it’s like going to Calais or something.’

The Doctor turned to face her. His features were alive with wonder and excitement. Not for the first time, Rose felt it was as if he was seeing through her eyes, and she wondered if that was one of the reasons he needed somebody to travel with. ‘Rose, the moon is incredible. Everything down on Earth relies on it. Rats jump for it. Tides rush out from it. Humans kiss under it. Without it there’d be nothing down there worth the light. And that just happened by chance – trillions of odds against it – one bit of stardust meets another bit of stardust.’

Rose jumped over to the doors and reached out for the handle, then stopped. ‘I should think up something to say.’

‘Just get out there,’ said the Doctor, swinging a bag full of golf clubs on to his shoulder. ‘Leap!’

Rose shut her eyes, pulled the door open and leapt.

She came down with a loud thud, smashing into a wooden table. It had been an ordinary leap, not weightless at all.

Picking herself up – the suit’s padding had protected her from the worst of the fall – she looked around. There were more tables, stools and chairs, a couple of fruit machines, a blackboard with QUIZ TUES-2

DAYS 8 p.m. TODAY’S SPECIAL CHICKEN CURRY chalked on it, and a long bar with towels over the pumps. All this was lit by the early morning sunlight of a half-hearted early British summer. The building was old, supported by wooden beams.

She turned to face the TARDIS, which stood even more out of place than usual at a corner of the bar. The space-suited Doctor stood in the doors, looking anywhere but at her. ‘Wow,’ he said. ‘Somebody’s built an exact replica of a pub on the moon!’

Rose laughed, undid her helmet and pretended to punch him. ‘Give it up! You’re so rubbish.’

‘Not that far out,’ said the Doctor a little unhappily, pulling off his own helmet. ‘If the moon is Calais, Earth’s Dover.’ He frowned. ‘It’s weird, though. I checked all the controls as we were coming in and we were definitely heading for the moon. I even clocked it on the scanner just before we landed, all grey and dusty, the moony old moon, that little old matchmaker in the sky.’

Rose could tell he was really concerned, that this wasn’t just an excuse cooked up for her benefit. ‘Go and check the TARDIS, then.’

The Doctor nodded. ‘I’ll go and check the TARDIS, then.’ But he stopped at the doors, looking out of the nearest window on to a village green and church that were almost too typical of their kind. ‘Looks like May. Looks like England.’ He sniffed. ‘Not too far from the sea.

Rose laughed and pointed to the TARDIS. ‘Go on, go and check it.’

The Doctor picked up his flagpole and bag of golf clubs and van-ished back inside the TARDIS.

Rose was about to follow him when she saw a newspaper lying on the bar. She couldn’t stop herself from grabbing it in her gloved hand and taking a look, checking the date. The Doctor was right: it was May.

Whenever she came back to Earth, Rose liked to catch up on the news. This was only a local paper, the front page concerned with nothing more exciting than a dispute over parking and a plan for a supermarket, but something made Rose take off her gloves and flick through its pages all the same as she walked idly towards the TARDIS.

A few pages in she stopped dead. She felt her heart miss a beat.

The headline ran ROMAN REMAINS AT CREDITON VALE. Beneath it was a colour picture of a middle-aged man in hard hat and yellow jacket, standing next to a large case that contained a broken section of Roman mosaic about six feet across. Depicted on the mosaic was a full-length portrait of a man and woman, both handsome, dark and curly-haired, in purple robes. Further along were a jug and a bunch of green grapes. And right at the far side, shown in shades of gold on tiny pieces of tile, was a familiar pepperpot shape. Three rods stuck out from it: an eye-stalk from the dome of its head, a sucker attachment and a gun from its middle. Its lower half was studded with shining circular shapes.

Rose ran for the TARDIS – and the police box door slammed shut in her face. There was a loud thump. The light on top began to flash and the ancient engines deep within the craft ground into life.

‘Doctor!’ Rose called. ‘Doctor, what are you doing?’

Five seconds later, the TARDIS was gone. A deep square imprint on the pub’s flowery carpet was the only sign it had ever been there.

KATE YATES JUST
knew
it was going to be a bad day.

She was dreaming that she was back at school. Everybody else in the class was sixteen, while she was twenty-eight, and there were childish sneers and whispers of ‘Why’s she
still
here?’ Then she heard her dad shouting up the stairs, ‘It’s eight o’clock!’ At the same moment the radio on her bedside table came to life. A few seconds later she heard the front door slam as her parents left for their jobs.

Then the news finished and Wogan began talking, the gentle Irish chatter Kate had known since childhood seeping into her very bones.

He talked about toothpaste, last night’s TV. . . small, funny things. But for Kate he was simply saying,
Just five minutes longer. Five minutes
longer in your bed, Kate Yates, in the softest, most comfortable bed in the
whole world.