Dog That Called the Signals 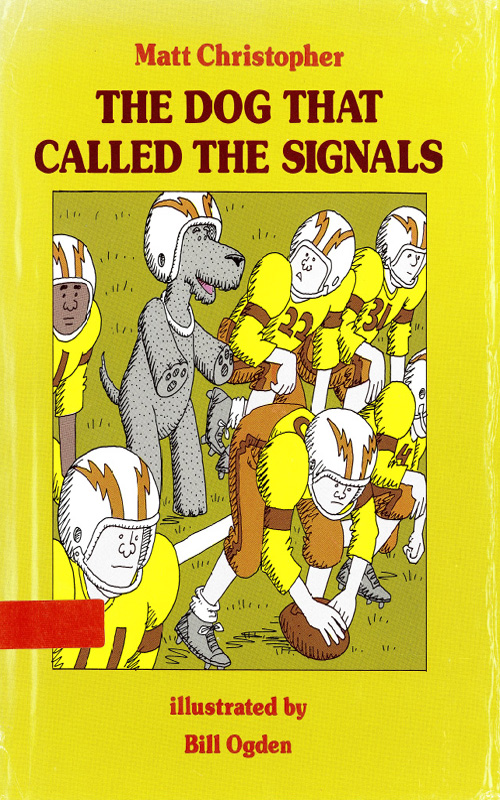 LONG STRETCH AT FIRST BASE

BREAK FOR THE BASKET

CATCHER WITH A GLASS ARM

TOO HOT TO HANDLE

THE TEAM THAT COULDN’T LOSE

THE YEAR MOM WON THE PENNANT

THE KID WHO ONLY HIT HOMERS

NO ARM IN LEFT FIELD

THE TEAM THAT STOPPED MOVING

THE PIGEON WITH THE TENNIS ELBOW

THE DOG THAT STOLE FOOTBALL PLAYS

THE DOG THAT CALLED THE SIGNALS

ALL RIGHTS RESERVED. NO PART OF THIS BOOK MAY BE REPRODUCED IN ANY FORM OR BY ANY ELECTRONIC OR MECHANICAL MEANS INCLUDING
INFORMATION STORAGE AND RETRIEVAL SYSTEMS WITHOUT PERMISSION IN WRITING FROM THE PUBLISHER, EXCEPT BY A REVIEWER WHO MAY QUOTE
BRIEF PASSAGES IN A REVIEW. 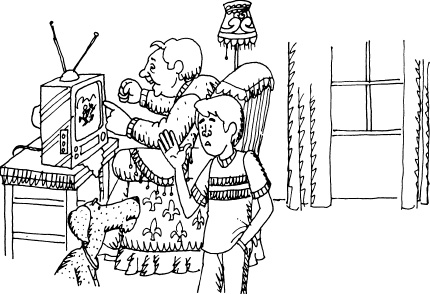 M
ike and his dog, Harry the Airedale, had walked from the field across the empty lot to Coach Hawkins’s house. They were now
seated in the living room trying to give the coach a message.

The coach was sitting on the edge of his chair in front of a television set, watching a football game and waving his arms
excitedly.

Mike glanced down at his dog and shrugged. “We came at the wrong time, Harry,” he said, disappointed.

“Yeah,” Harry agreed. “But keep butting in. He’s sure to hear you after a while.”

As far as Mike knew, Harry was the most unusual dog in the world. Mike had found Harry in a pet shop and had discovered that
the dog could communicate
with him by mental telepathy. He had brought Harry home that day and they had been friends ever since. 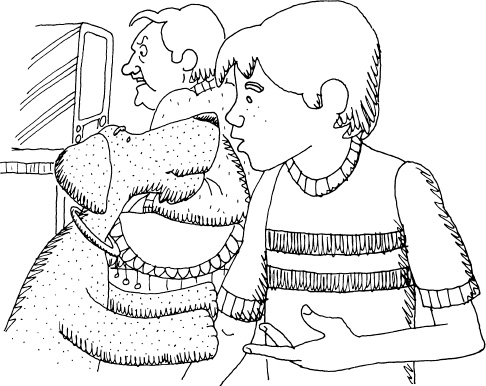 Mike looked from Harry to the coach. “I bet he’s forgotten why he asked us in,” Mike thought.

Suddenly the big man glanced around at them, and an apologetic smile came over his round face. “Sorry, Mike,” he said. “But
I just had to watch that play. What can I do for you?”

“I just saw Bobby Doan,” Mike explained. “He can’t quarterback the team in next Saturday’s game. He and his family are going
on a vacation.”

“He
what?
” The coach rolled his eyes up toward the ceiling and slapped his knees, frustrated. “Of all the lousy luck! Well, there’s
only one thing to do, Mike.
You
will have to play quarterback.”

“Yes, you. I know you don’t have much experience, but you’ve tried hard in practice. There’s a lot at stake in that
game, kid,” the coach said seriously. “The Number Seven Firemen, our team’s sponsor, promised us new uniforms if we beat the
Browns. And you know how badly we need uniforms. Ours are beginning to look like rags.” 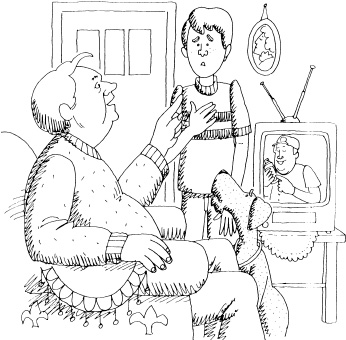 “I think you can do it, kid,” said the coach. “Just go home and study your playbook. And now that that’s settled, please excuse
me.”

He turned his attention back to the football game on the TV set, watched it a few seconds, and began yelling again: “Run it
through right tackle, Jim! Right tackle! Attaboy! See that?” he said to Mike. “He played it just as if he had heard me!”

“Right. Well, see you at practice, Coach,” Mike said quietly. He walked out of the house, Harry trotting at his side.

“He sure gets wrapped up in football games, doesn’t he?” remarked Harry.

“He sure does,” said Mike. “But he
lives by himself and he must not have much company. I guess that’s why he likes getting out and coaching us.” 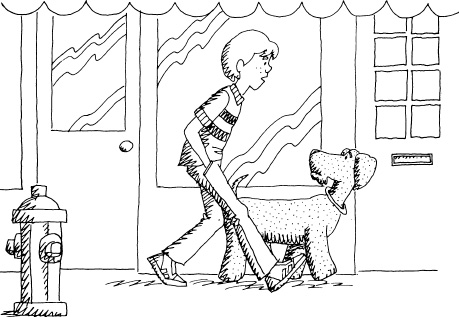 “I suppose,” replied Harry, “but he lives almost close enough to the field to coach us from his back porch.”

They reached the intersection, waited for the light to change, then crossed the street.

“Harry, I can’t play quarterback,” Mike said, thinking of all the things a quarterback had to do. “I’m a better linebacker.
I don’t know a thing about calling signals.”

“Well, as you humans say, it’s never too late to learn,” said Harry.

“Yeah, sure,” Mike shot back, and they glumly walked home.

The Jets practiced on Tuesday, and Coach Hawkins had Mike work out at the quarterback slot.

He didn’t do very well. Twice he fumbled the ball, and three times he threw passes that were either too far beyond, or too
far short of, the receivers. He felt terrible.

“Coach, I’m playing lousy,” he complained. “Can’t you get someone else to play quarterback?”

The coach patted him on the shoulder. “Settle down, Mike,” he said encouragingly. “You’ll do okay.”

“Sure, he will. Except for two passes that sailed over my head he was great,” Butch Stevens, the right side wide receiver,
snickered.

In Thursday’s practice Mike figured he played worse than he had on Tuesday. His long passes to Butch, and to Tom Reed, the
wide receiver on the left side, were way off and he had trouble remembering which plays to call.

Mike did, and discovered that he could throw them on target better than he could the longer ones. He felt a little better.

“Nice going.” Harry’s pleased words came into his thoughts from the sideline. Harry, Mike saw, was standing next to the coach.

A little later Mike glanced over and saw Coach Hawkins scratching Harry’s head. Harry seemed to enjoy it, judging from the
silly look on his face.

“I guess the coach has gotten to like the little monkey,” Mike thought, smiling to himself.

“Dog, Mike, not monkey,” Harry’s thoughts shot back to him. “I sure hope you know the difference.”

Mike’s face turned red. “I sure do, and I’m sorry, Harry,” he apologized. 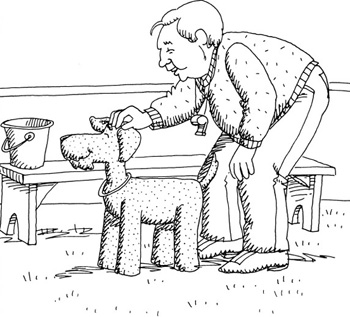 The team practiced again on Friday, hoping to be well prepared for Saturday’s game against the Browns. They had to win it,
or their chance to get brand-new uniforms would go down the drain.