Read Dreaming of the Wolf Online

Dreaming of the Wolf 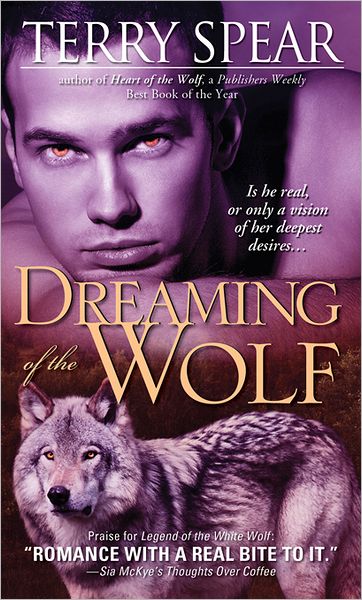 An excerpt from
A SEAL in Wolf’s Clothing

I dedicate this book

to my new daughter-in-law,

who loves fantasy as much as I do

and who shares my appreciation

He just had to find the right woman!

the heroine and hero meeting

at martial arts in the Heart of Texas—

and that was only the beginning.

Annoyance welling up inside him, Jake Silver stared at the closed sign taped prominently to the glass door as he parked in front of the Cliffside Art Gallery in Breckenridge, Colorado, his framed photography neatly stacked in the backseat of his pickup truck.

Hell, he didn’t want to be here in the first place. But now this?

The Victorian charm of the place reminded him of his own hometown of Silver Town, where he
should
have stayed!

The sign pronounced:
Closed
until
11 a.m. due to unforeseen family emergency.

With so much work to do managing the leather-goods factory and running the town and pack as his older brother’s sub-leader, Jake had only intended to drop off his photography and then drive the three hours back home. He hadn’t originally planned to display his photography at all. But his brother’s mate had finally persuaded him, despite him having balked at the notion. And Jake had to admit sales of his photographs in a Denver art gallery had exceeded expectations. Still, he had half a mind to forget the whole damn thing and return home. But he knew Lelandi would be upset if he didn’t go through with this, and in her pregnant state, she easily shed a bundle of tears with the least provocation. He really didn’t want to see her break down again.

Hell, he would have eaten breakfast with the family first, had he known of the delay. All business all the time, Jake glanced around the town, wondering what else to do with himself until the place opened up. He hated wasting time like this.

Then a woman caught his eye as she stopped briefly to surreptitiously take a picture of the license plate on a black Mercedes parked across the street at a restaurant. Dressed in a businesslike, short-waisted suit jacket, a modest-length skirt, and three-inch heels, she was a real looker with her thick, dark brown curls piled on top of her head in an elegant twist. Her actions, combined with her appearance, grabbed his attention. He photographed wildflowers as a break from work, while she was photographing a license plate
for
work? Undercover job maybe?

He wondered what color her eyes would be: smoky gray, chocolate brown to match her rich thick hair, misty green, oceanic blue—or something in between.

The wolfish side of his curious nature was piqued. She didn’t look like the type he’d picture working undercover. And he wondered who her target was. Maybe she was a private investigator checking on a wayward wealthy husband,
not
a cop after a criminal.

Then the woman slipped her small camera into a little black purse and entered the restaurant, her high heels clicking on the pavement.

As soon as the door shut behind her, Jake considered the place, a burgundy-red Victorian house with white gingerbread millwork fitted into gables and dormers, ornately carved corbels clinging beneath beams, and lacy fretwork running across the length of the house. The restaurant looked a lot classier than those where he was used to eating. The meals probably cost a fortune.

But he couldn’t quit thinking about the slip of a woman and what she was up to. He didn’t really want to eat at such a high-class joint and waste a lot of money on a breakfast that he was sure he could eat for a fraction of the cost somewhere else. But he still headed across the street to the restaurant, telling himself it had nothing to do with the woman, that it was just a way to kill time and that the restaurant was the closest one to the gallery. He tried to ignore the steak-and-eggs place just down the street, which was more like what he was accustomed to and where the meals were most likely much more at his price. Not that he couldn’t afford the higher prices. He just wasn’t inclined to pay them if he didn’t have to.

When he entered the restaurant, he found it filled with talkative customers seated at lace-covered tables or tucked into booths where the tables were bare, which suited him better. But the woman who had garnered his interest was nowhere to be seen. Tiffany light fixtures hung over the tables, while large windows faced out onto the street, their lace curtains tied back to permit the view of the snow-tipped mountain in the distance. Royal-blue velvet swags hung above them, fringed in gold. Feminine and floral. Nothing that appealed to him.

He preferred Silver Town Tavern’s more rough-and-tumble, old silver-mining town appearance. But then he considered the floral landscapes hanging on the walls and thought his work would fit here nicely.

A young woman wearing a Victorian gown and a lace-trimmed apron quickly showed him to a booth with too bright a smile and a wayward perusal of his physique. But the overly tanned blond didn’t garner his attention like the woman with the dark hair and creamy skin had. The sway of her hips in the fitted, black pin-striped skirt, the way her hands had lovingly held the camera when she quickly took the picture she needed, and the way her full peach lips had parted as she concentrated on getting a good shot still lingered in his thoughts. He had to admit part of his interest was because she carried a camera, the way he often did, even if she didn’t use hers in the pursuit of a hobby. Maybe when she wasn’t working, she did.

“Sir, is this booth all right?” the woman asked, breaking into his ruminations.

“This will be fine.”

He wanted to ask if the hostess had seen the woman who had entered before him and could seat him where he could further observe her. He normally photographed strictly wildflowers, but in her case, he would have made an exception and taken her portrait. But not in a sterile studio environment. On a high, sloping field at the foot of the mountains with soft natural lighting. Wearing faded blue-jean short shorts and a skimpy tank top, barefoot and braless, the object of his fascination would sit in a field of pale purple daisies with their gold-button centers facing upward and lacy towering firs providing a backdrop. That’s the portrait he wanted to take of her.

A waitress, dressed in a Victorian gown and apron similar to the hostess’s, hurried over with a menu and a glass of water. She was just as friendly and just as unabashedly bold about giving him the once-over. But he was sure it had more to do with feminine interest than with a bigger tip since he was the only male around the age of thirty who was seated alone in the establishment. Then again, maybe she
was
sizing him up to see if he fit the usual clientele—rich resort visitor—or if he was an off-season ski bum who had mistakenly found his way into this place.

He’d dressed up a little more than usual because he would be meeting with the art gallery owner, although he probably could have worn anything and the gallery staff wouldn’t have cared. Artists were artists, after all.

But he wore a vest with his stonewashed jeans and a pin-striped dress shirt, although he’d rolled the sleeves up to his elbows and left a couple of the buttons down the front of the shirt undone. And he hadn’t bothered to shave for a couple of days, giving him more of a rugged appearance. Dressy just didn’t suit him much.

Light fluffy music played overhead, while the aroma of coffee brewing and steak sizzling on a grill wafted through the air. His stomach rumbled in anticipation as he considered the menu, narrowed his eyes to study the prices, and nearly had a stroke.

“Highway robbery,” he muttered under his breath. He would have walked out, but he still wanted to see the woman again and learn what she was up to. Then he waved to the waitress, told himself he only lived once—if paying exorbitant prices meant he was living—and placed his order.

When the waitress left, Jake saw her—the woman who’d caught his eye outside the restaurant—now sitting at a booth across from his. His heartbeat quickened, and he sat up a little taller. She was observing a man in his mid-fifties who was seated at a nearby table and wearing a fitted dark-gray suit. He was swarthy, fat faced, and fat lipped, with a bulbous nose, receding black hair, and dark cold eyes. Something about the man warned Jake that he was a threat, not someone to anger. Not just a man having an affair on his wife.

The fact she was watching the man bothered Jake. He saw it as a case of her flaunting danger. She was maybe five-five in stocking feet with a small build and tendrils of curls spilling from her upswept hair to tickle the back of her neck. She was not nearly big enough or mean-looking enough to take on whomever the man was and win the confrontation. Now Jake could see her eyes—the color of rich chocolate, just like her hair. Her eyes were narrowed a hint and her brows knit into a small frown.

She pursed her full glossy lips, a shimmering shade of peach, as she wrote something on a notepad. Her gaze returned to the man. Her lips garnered another look as she worried the bottom one a little, and Jake had the urge to coax her mouth into a smile with his, to take away the frown, to give her something positive to think about. Like
him
.