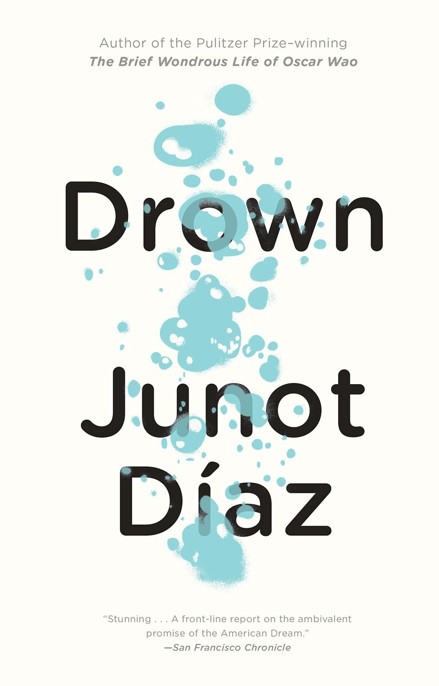 Praise for DROWN by Junot Díaz

“There have been several noteworthy literary debuts this year, but Díaz deserves to be singled out for the distinctiveness and caliber of his voice, and for his ability to sum up a range of cultural and cross-cultural experiences in a few sharp images…. The motifs—the father absent and indifferent to the family, his infidelities and bullying while they’re united, the shabby disrepair of northern New Jersey—resonate from story to story and give
Drown
its cohesion and weight…. These are powerful and convincing stories. And what is powerful in these stories isn’t their cultural message, though that is strong, but a broader, more basic theme…. These 10 finely achieved short stories reveal a writer who will still have something to say after he has used up his own youthful experiences and heartaches.”

“Talent this big will always make noise…. [The ten stories in
Drown
] vividly evoke Díaz’s hardscrabble youth in the Dominican Republic and New Jersey, where ‘our community was separated from all the other communities by a six-lane highway and the dump.’ Díaz has the dispassionate eye of a journalist and the tongue of a poet…”

“Junot Díaz’s stories are as vibrant, tough, unexotic, and beautiful as their settings—Santo Domingo, Dominican Nueva York, the immigrant neighborhoods of industrial New Jersey with their gorgeously polluted skyscapes. Places and voices new to our literature yet classically American: coming-of-age stories full of wild humor, intelligence, rage, and piercing tenderness. And this is just the beginning. Díaz is going to be a giant of American prose.”

“This stunning collection of stories is an unsentimental glimpse at life among immigrants from the Dominican Republic—and another front-line report on the ambivalent promise of the American Dream. Díaz is writing about more than physical dislocation. There is a price for leaving culture and homeland behind…In this cubistic telling, life is marked by relentless machismo, flashes of violence and severe tests of faith from loved ones. The characters are weighted down by the harshness of their circumstances, yet Díaz gives his young narrators a wry sense of humor.”

“Graceful and raw and painful and smart…His prose is sensible poetry that moves like an interesting conversation…The pages turn and all of a sudden you’re done and you want more.”

“A stunning and kinetic first collection of short stories…. Díaz has the ear of a poet (a rarity among fiction writers), and many of his stories are piloted by a compelling and often fiercely observed first-person narration. Díaz’s precise language drives the accumulation of particular concrete sensory details to the universals of broader, nuanced experience. Comparisons to writers like Sandra Cisneros or Jess Mowry or even Edwidge Danticat (all of whom are at the top of my list) are probably inevitable, but Díaz distinguishes himself thoroughly in this book…. In an era of the glib, hip ‘I’ve-seen-it-all-nothing-shocks-me-anymore’ narrator, Díaz doesn’t back away from sentiment. Though he is never mawkish, his stories are richly textured in feeling…Díaz is a life-smart, savvy writer who, because he’s honest and often funny, very gently breaks your heart.”

“New Jersey and the Dominican Republic are thousands of miles apart, but in Junot Díaz’s seductive collection of short stories, they seem to blend into each other as effortlessly as Díaz weaves the words that bring to life the recurring characters that populate both places…. In a sense, this book is about that old and much misunderstood Latino demon, machismo, which only recently is being seen as something not innate to Latino males, but rather as the result of their often futile attempts to reconcile their dual roles as men (in the eyes of their families) and as mere boys (in the eyes of the outside world)…. There’s a lot of artistry in this book, and where there is art, there is always hope.”

“Remarkable…His style is succinct and unadorned, yet the effect is lush and vivid, and after a few lines you are there with him, living in his documentary, his narration running through your head almost like your own thoughts…. Vignettes…observed with depth and tenderness but most of all with a simple honesty that rings as clear and true as a wind chime.”

“Mesmerizingly honest, heart-breaking and full of promise…Tales of life among the excluded classes of the diaspora, they tread fearlessly where lesser writers gush and politicize—which is exactly their political and aesthetic power.”

“The talent is strong and individual…. Díaz’s languageis careful and astringent…powerful and revelatory.”

All rights reserved. This book, or parts thereof, may not be reproduced in any form without permission.

How to Date a Browngirl, Blackgirl, Whitegirl, or Halfie

The fact that I

am writing to you

already falsifies what I

wanted to tell you.

how to explain to you that I

though I belong nowhere else

We were on our way
to the colmado for an errand, a beer for my tío, when Rafa stood still and tilted his head, as if listening to a message I couldn’t hear, something beamed in from afar. We were close to the colmado; you could hear the music and the gentle clop of drunken voices. I was nine that summer, but my brother was twelve, and he was the one who wanted to see Ysrael, who looked out towards Barbacoa and said, We should pay that kid a visit.

Mami shipped me and Rafa out to the campo every summer. She worked long hours at the chocolate factory and didn’t have the time or the energy to look after us during the months school was out. Rafa and I stayed with our tíos, in a small wooden house just outside Ocoa; rosebushes blazed around the yard like compass points and the mango trees spread out deep blankets of shade where we could rest and play dominos, but the campo was nothing like our barrio in Santo Domingo. In the campo there was nothing to do, no one to see. You didn’t get television or electricity and Rafa, who was older and expected more, woke up every morning pissy and dissatisfied. He stood out on the patio in his shorts and looked out over the mountains, at the mists that gathered like water, at the brucal trees that blazed like fires on the mountain. This, he said, is shit.

Worse than shit, I said.

Yeah, he said, and when I get home, I’m going to go crazy—chinga all my girls and then chinga everyone else’s. I won’t stop dancing either. I’m going to be like those guys in the record books who dance four or five days straight.

Tío Miguel had chores for us (mostly we chopped wood for the smokehouse and brought water up from the river) but we finished these as easy as we threw off our shirts, the rest of the day punching us in the face. We caught jaivas in the streams and spent hours walking across the valley to see girls who were never there; we set traps for jurones we never caught and toughened up our roosters with pails of cold water. We worked hard at keeping busy.

I didn’t mind these summers, wouldn’t forget them the way Rafa would. Back home in the Capital, Rafa had his own friends, a bunch of tígueres who liked to knock down our neighbors and who scrawled
chocha
and
toto
on walls and curbs. Back in the Capital he rarely said anything to me except Shut up, pendejo. Unless, of course, he was mad and then he had about five hundred routines he liked to lay on me. Most of them had to do with my complexion, my hair, the size of my lips. It’s the Haitian, he’d say to his buddies. Hey Señor Haitian, Mami found you on the border and only took you in because she felt sorry for
you.

If I was stupid enough to mouth off to him—about the hair that was growing on his back or the time the tip of his pinga had swollen to the size of a lemon—he pounded the hell out of me and then I would run as far as I could. In the Capital Rafa and I fought so much that our neighbors took to smashing broomsticks over us to break it up, but in the campo it wasn’t like that. In the campo we were friends.

The summer I was nine, Rafa shot whole afternoons talking about whatever chica he was getting with—not that the campo girls gave up ass like the girls back in the Capital but kissing them, he told me, was pretty much the same. He’d take the campo girls down to the dams to swim and if he was lucky they let him put it in their mouths or in their asses. He’d done La Muda that way for almost a month before her parents heard about it and barred her from leaving the house forever.

He wore the same outfit when he went to see these girls, a shirt and pants that my father had sent him from the States last Christmas. I always followed Rafa, trying to convince him to let me tag along.

I don’t need you to walk me anywhere. Just wait for me.

If I kept on he’d punch me in the shoulder and walk on until what was left of him was the color of his shirt filling in the spaces between the leaves. Something inside of me would sag like a sail. I would yell his name and he’d hurry on, the ferns and branches and flower pods trembling in his wake.