Eichmann, Bureaucracy and the Holocaust 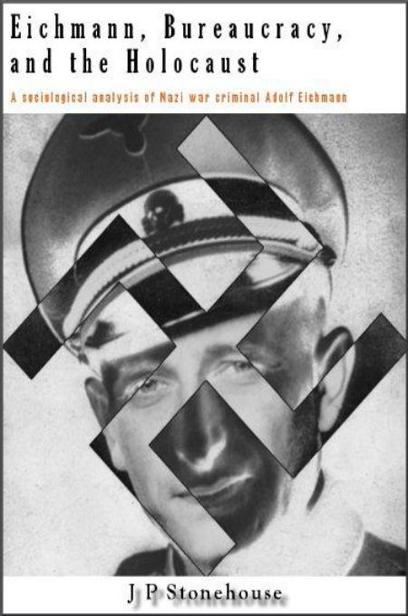 Title: Eichmann, Bureaucracy and the Holocaust

This Kindle edition was hand coded in HTML/CSS by the author and processed with Kindlegen and Amazon KDP. The text was sourced from the author's original Word document.

The right of J P Stonehouse to be identified as the author of this work has been asserted by him in accordance with the Copyright, Designs and Patents Act 1988.

Dr Edwin Griggs, PhD (Senior Lecturer in Social Policy at Coventry University, United Kingdom) for his advice and support as regards the ethical dimensions of researching and writing about Eichmann.

Dr S.A. Mousalimas, D.Phil (University of Maryland University College Europe) for allowing me the opportunity to present and discuss the ideas in this work with his students.

The Nizkor Project (http://www.nizkor.org/) for making the Eichmann trial transcripts available online and its invaluable contribution to Holocaust research.

The open source community for providing The Gimp (http://www.gimp.org/) and the Notepad++ editor (http://notepad-plus-plus.org/) used to create this e-book.

Part One: Representation and Reality

The Will of the Führer

A Glorious Page in Our History

The Ingredients of the Holocaust

A Cog in the Machine?

The Satisfaction of Pilate

The Pursuit of Excellence

Without Ill-Will or Favour

In Accordance with the General Measures

S.S. Ranks and their Equivalents

A Brief History of the S.S.

T
his work was researched and written over a decade ago and submitted as my final year undergraduate dissertation in May 2001. It was subsequently awarded a First Class mark. The original draft ran to 17,000 words plus Appendices - more than half as long again as the version presented here - and was abridged to reduce it to the mandatory 10,000 word limit and ensure that the text confined itself to matters sociological. Some of the excised chapters made it into Appendices in much abbreviated form, others were removed entirely and have since been lost in the digital ether. Although the final version is neither as broad nor as deep as I originally intended, I believe - and hope - that this short analysis can still be of use to under- and postgraduates, or to the layman interested in gaining a perspective on Eichmann that differs from mainstream offerings, which tend to focus on acts and deeds without providing any sort of explanatory framework.

S
ometime in early 1960 members of the Israeli secret service, perhaps working on a tip-off from their Russian counterparts, flew to Argentina to conduct a surveillance operation, the subject being one Rikardo Klement, a resident of Buenos Aries. On May 11 that year, having satisfied themselves as to his true identity, the subject was kidnapped and taken to a safe house, where under questioning he admitted what his Israeli captors had suspected all along: "Ich bin Adolf Eichmann". The subsequent trial, conviction and execution of Lieutenant Colonel Otto Adolf Eichmann, the Gestapo officer responsible for deportations to the Third Reich's extermination facilities and the only Nazi war criminal to be prosecuted on Israeli soil, was an international sensation. In the decades that followed Eichmann would be the subject of an equally sensational number of more-or-less lurid books and documentaries, not to mention three full-length feature films. A surprisingly large number of historical works adopt a similarly simple and sensationalist view of Eichmann, one which elevates his skills, status, role and importance vis-à-vis the Nazi hierarchy and Final Solution, and explains his participation by denouncing him as an evil genius, rabid anti-Semite, fanatical National Socialist, and sadistic monster. Such views tend to be repeated over-and-over again
ad nauseam
despite, or perhaps in spite of, the rather less glamorous version of Eichmann found in Hannah Arendt's
Eichmann in Jerusalem: A Report on the Banality of Evil
. Sadly, this alternative account remains largely ignored: even those who acknowledge and cite the work invariably focus on Arendt's use of the term "evil" at the expense of her wider assessment of Eichmann's modest intellect and utterly mundane personality.

Of course, in the cold light of day it is easy to understand why some rush to label Eichmann as evil or sadistic, given that his involvement and culpability is not in doubt. Yet these terms seem inconsistent with what we know about him. As Arendt observes, his ordinariness, normality, and total lack of any outstanding qualities disconcerted even his Israeli interrogators. However, it takes little effort or insight to look at the historical record and arrive at the 'commonsense' conclusion that somebody who participated in the Final Solution must be evil or sadistic. It's important to recognise that merely labelling somebody as this, that or the other does not, as some historians seem to assume, explain that person's actions and motivations. Accordingly, we must beware of falling prey to a tautology that attempts to explain Eichmann's actions in terms of some sadistic character trait and points to these same actions as 'proof' of his sadism. We should instead examine Eichmann's case from a sociological perspective and seek to analyse his actions within a theoretical framework. In so doing we can come to understand how and why a 'normal' individual could commit such acts, rather than merely draw conclusions from the historical record.

One such perspective is that of Bauman, whose
Modernity and the Holocaust
utilises a broadly Weberian framework to demonstrate that the Holocaust was perpetrated using 'normal' yet uniquely modern methods, scientific procedures, and bureaucratic forms of organisation. The intention here is to analyse Eichmann's activities and behaviour in the context of Bauman's schema, and those other aspects of Weber's conceptualisation of bureaucracy and the bureaucrat, to see whether Eichmann's 'ordinariness' and 'normality' can be reconciled with his actions. Accordingly, in Part Two Eichmann's activities will be examined in the context of the bureaucratic ethos and concomitant consequences of the demand that bureaucrats keep separate their public and private lives. The effects of hierarchy and the chain of command will also be considered, with regard to the extent to which they facilitate the re-deployment of morality, reducing it to a technical exercise concerned with performance and standards. Finally, the issue of impersonality and generality will be discussed, with a view to re-examining a number of specific cases involving individuals, whose fate Eichmann seems to have sealed.

This is not to say that other issues are not vital to a full understanding of Eichmann's role. Undoubtedly, a more wide-ranging account would seek to analyse Eichmann from a psychological perspective and account for the nature of totalitarian regimes and role of ideology and propaganda. However, this work's primary concern is Eichmann's position within a bureaucratic organisation, although the influence of ideology
will
be addressed towards the end of Part One given that the very similar "glorifying myth" forms an integral part of Weber's understanding of the bureaucratic form. Prior to this, however, it seems important to offer an account of Eichmann's life, of how he came to be an S.S. officer, and to situate him within the organisation of which he was a part. In so doing, the intention is to discover the 'real' Eichmann, the extent to which his life and role are consistent with the myth, the credibility of his claim to have merely 'obeyed the law', and to challenge some commonly held beliefs as regards the nature of the S.S. and the Holocaust in general.

Part One:
Representation
and
Reality

"These people referred to me to whitewash themselves. But when such a thing goes on for years and everyone joins in, blaming me for the deeds of all, a legend is created in which exaggeration plays a large part."
-- Adolf Eichmann

I
n a sense, the 'truth' about Eichmann was determined even before his infamous trial in Israel during 1961-2. Partly due to his own propensity to boast (a vice which fuelled the stories that emerged from the Nuremberg trials, where Nazis fell over themselves to blame one another), Eichmann was intimately identified with the Final Solution long before his arrest. Indeed, the extent to which his former colleagues attempted to absolve themselves is demonstrated by the fact that he is often referred to as one of the architects of the Final Solution itself. The damning testimony of,
inter alios
, his former subordinate Dieter Wisliceny, together with that of Auschwitz commandant Rudolph Höss, forms the basis of Eichmann's almost legendary reputation, creating an 'orthodox' historical perspective that remains largely unchallenged even today. Although the intention here is in no way to offer a whitewashed or sanitised version of his involvement or culpability, it does seem important to offer an account of Eichmann's actual documented role, to assess the validity and credibility of this mythical Eichmann within the framework of Weber's conceptualisation of bureaucracy and the bureaucrat. Who, then, is Adolf Eichmann? How is he portrayed? What are the historical "facts"? How can a sociological perspective help distinguish between the representation and the reality?

In a work published only eight years after the war, Frischauer (1953) offers a perspective on Eichmann drawn almost wholly from Wisliceny's testimony. Here, Eichmann is portrayed as a tall, blond, blue-eyed dream of a German, a Palestine-born scholar of Jewish history and literature, fluent in Hebrew, who made such an impression on Himmler that the latter personally appointed him to the Gestapo and remained a close confidant for the duration of the war. Although these factual inaccuracies are now largely recognised, the general tone of Frischauer's account is to be found in many contemporary works, despite the rather less formidable reality presented at the trial. Not least are those exaggerated accounts of his formal powers and alleged 'hypnotic' ability to exert influence over others, be they Jewish leaders or even Himmler himself (Levai cited by Hilberg, 1961, p.529). By way of example, Krausnick (1968, p.101) holds Eichmann responsible for the introduction of Zyklon-B, the poison gas used in the death camps, which he apparently recommended to Höss on the grounds that carbon monoxide could not possibly despatch Jews in the numbers required*. Another account, that of Gilbert (1979, pp.62-5), claims that Göring's July 1941 directive to Heydrich, which instructed Heydrich to set in motion the machinery of destruction, was in fact written by Eichmann. The same author (ibid.) has Eichmann "preparing the ground" for the Final Solution during August that year, and refers to the infamous Wannsee Conference of January 1942, at which Heydrich secured the complicity of key ministries, as "Eichmann's meeting".

* It seems that Eichmann, acting on instructions from Heydrich, visited Maidenek sometime in late 1941, where he witnessed Jews being gassed by carbon-monoxide fumes generated by a U-boat engine built inside a hermetically-sealed chamber. Later that same year, Heinrich Müller despatched him to the Litzmannstadt area of Poland to witness the operation of mobile gassing apparatus. Here, Jews were loaded onto a bus and gassed by carbon monoxide fumes from the vehicle's exhaust. Eichmann was informed that the process would take only three minutes, but observed that it took fifteen minutes or thereabouts. He was invited to look inside the van via a peep-hole, but refused. Müller chided him for his squeamishness on his return to Berlin. See Life Magazine (Vol. 49) articles November / December 1960.