Read Enemy at the Gates Online

Enemy at the Gates 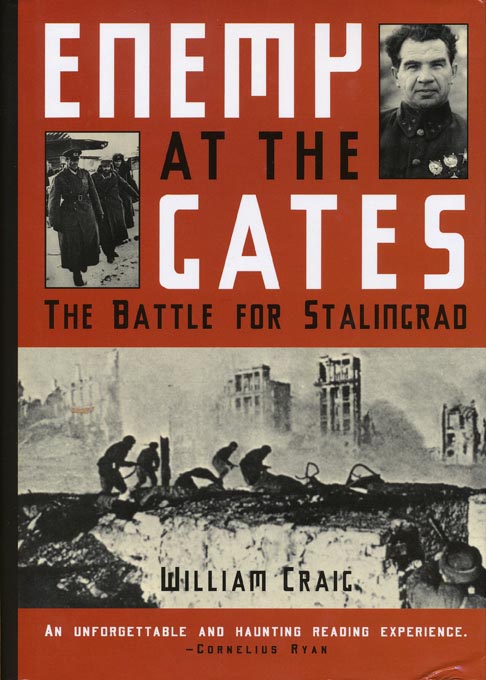 The Battle for Stalingrad

ENEMY AT THE GATES

William Craig (1929-97), a native of Concord, Massachusetts, was educated at Columbia University. His first book,
The Fall of Japan,
was a documentary account of the last weeks of the Second World War in the Pacific. His first novel,
The Tashkent Crisis,
a thriller about espionage and international politics, was published in 1971.
Enemy at the Gates
is the culmination of five years of research, during which he travelled extensively on three continents, studying documents and interviewing hundreds of survivors of Stalingrad.

To my wife Eleanor

(a division of Penguin Books Ltd)

First published in the United States of America by

Except in the United States of America, this book is sold subject to the condition

that it shall not, by way of trade or otherwise, be lent, resold, hired out, or

including this condition being imposed on the subsequent purchaser.

The scanning, uploading and distribution of this book via the Internet or via any

law. Please purchase only authorized electronic editions, and do not participate in

or encourage electronic piracy of copyrighted materials. Your support of the

When I was a child I discovered an exciting fantasy world in the pages of history books. At seven I marched to the walls of Jerusalem beside the Crusaders; at nine, I memorized Alfred Lord Tennyson's glorious paean to the immortal men of the Light Brigade as they charged at Balaklava. Two years later, uprooted from familiar surroundings when my family moved to another city, I discovered a kindred spirit in the lonely figure of Napoleon Bonaparte as he languished in exile on Saint Helena Island.

The bombing of Pearl Harbor on December 7, 1941, added a new dimension to my interest in historical figures and events. My own relatives were plunged into the global conflict, and I followed their exploits with a daily diary of World War II. As the self-ordained Boswell to the Allied forces I neglected my Latin declensions to record the ominous details about Wake, Guam, Bataan, and Corregidor. On entering the eighth grade in the fall of 1942, I became an amateur cartographer, drawing meticulous maps of places like Guadalcanal and New Guinea—even a city called Stalingrad, deep inside Russia. Because of my passionate interest in Napoleon, because I knew of the rout of his
Grand Armee
on the vast snow-covered plains of czarist Russia, I quickly developed an interest in the German attempt to conquer the Soviet Union. It occurred to me that the same fate might await the Nazi panzers as they moved resolutely into the heartland of the USSR.

During October and November of 1942, I spent more and more time away from my studies to read everything I could find about this Soviet city on the edge of Asia. The reports told of fighting in sewers, cellars, office buildings, and I tried desperately to imagine such horrible moments in men's lives. For a thirteen year- old boy brought up in a peaceful land, such images were difficult to conjure.

In February 1943, the German Sixth Army surrendered and our newspapers carried pictures of the astonishing Russian victory. One particular wire photo of captured Field Marshal Friedrich von Paulus caught my attention. His face was deeply lined; his eyes spoke of nightmares he had witnessed. This once-proud German officer was now a broken man.

The memory of that picture remained with me over the years.

During the next quarter century, an avalanche of books spewed forth from both Soviet and German presses about Stalingrad. Some were personal narratives, others historical treatises. The Russians wrote proudly of their incredible victory. Frequently, however, they distorted facts in order to conform to political realities. Stalin's name disappeared from accounts of the battle; so did those of Khrushchev, Malenkov, and Marshal Georgi Zhukov. Thus the Russian side of the story was shrouded by official secrecy.

The telling of the story from the German side suffered a different distortion. Few German authors examined the myriad complexities that led to the loss of Sixth Army at Stalingrad, nor could they, since they were denied access to Russian sources. And the memoirs of the German generals who participated in the battle were filled with controversial statements, personal vilification, and censure. Furthermore, the Germans never gave credit to the Red Army for its dogged defense of Stalingrad and brilliant counterattack that defeated what, until then, had been the finest army in the world.

By now I had become an author and historian and, still captivated by that picture of a beaten Paulus, I embarked on a personal investigation of what had happened at Stalingrad. To be successful in this venture, I had to do what no one had done before: study the official records of both the Russian and Axis forces engaged in the conflict, visit the battlefield and walk the ground for which so many men had died, locate survivors of the battle—Russians, Germans, Italians, Rumanians, Hungarians— and get their eyewitness accounts, their diaries, photographs, and letters. It was not an easy task.

First I met with Ernst von Paulus, the field marshal's only surviving son, at Viersen in West Germany. Looking strikingly like his father, Ernst spoke for hours about the man who had endured so much: the loss of his entire army, his years of captivity in the Soviet Union, the twilight of a broken life in Dresden, where Paulus spent his last days composing rebuttals to those critics blaming him for the tragedy at Stalingrad.

Then I went to Stalingrad, the city that had destroyed Paulus's career and reputation. A casual visitor there finds that Stalingrad is once again an industrial giant in the Soviet Union. Its broad boulevards are rimmed with banks of flowers. Sparkling white apartment houses form miles of comfortable oases in a sea of busy factories and workshops. The city's inhabitants move energetically along downtown streets. At one intersection, a crowd gathers around a new sedan to admire it; at night, couples stroll the Volga embankment and watch the lights of passing steamers and barges. In so peaceful a setting it is almost impossible to imagine that two nations fought a titanic battle here only thirty years ago.

Evidence of that cruel struggle is sparse. At a grain elevator, an irregular line of bullet holes can be seen across the concrete face of the silos. On the wall of the bustling Univermag Department Store, a plaque notes that the German Sixth Army surrendered there in 1943. Further north, on Solechnaya Street, a television antenna sprouts up from an apartment house where another sign describes a fifty-eight-day struggle for the building during the fall of 1942. As I stood there reading it, children ran across a grassy courtyard that once had been filled with mines and dead soldiers.