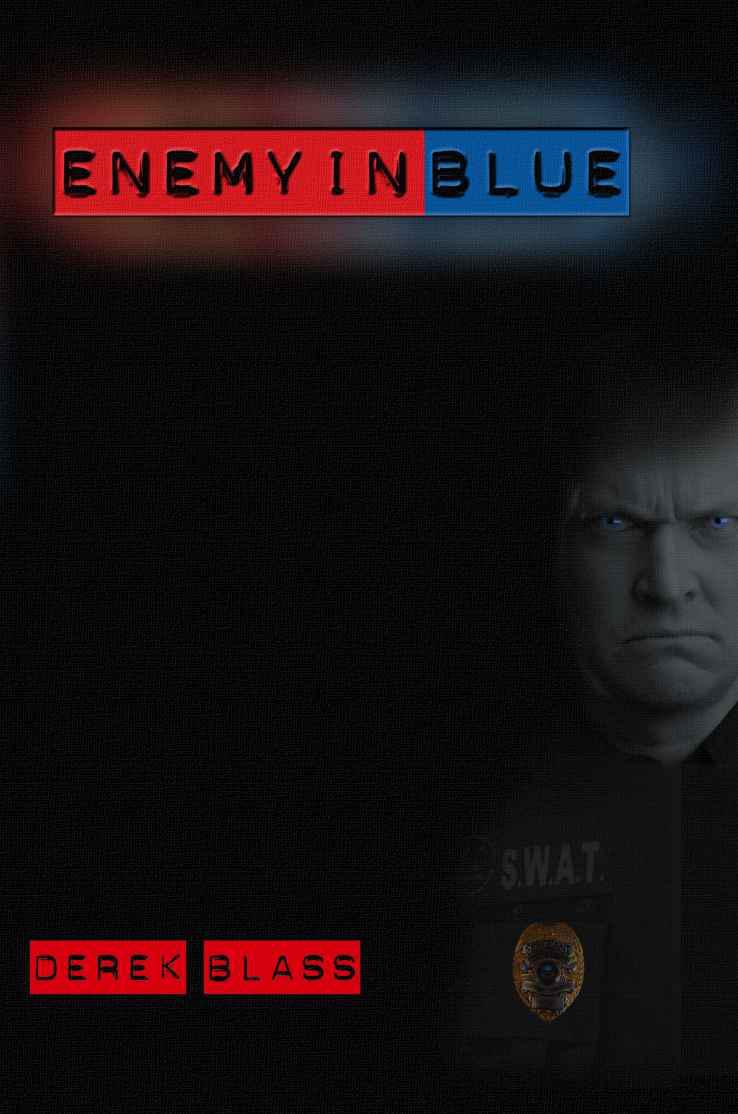 YOU KNOW WHO YOUR ENEMY IS?
The streets aren't safe when your enemy wears
a blue uniform and a gold badge.
What if the good guys weren't
good?
What if a cop went rogue and killed an innocent man?
What if
it was all caught on video and the cop would do anything to cover it
up?
Chase this lawless cop through the streets and to a scintillating
series of showdowns with Cruz Marquez, a young attorney trying to nail down his
enemy in blue.
Will justice be served?

This book is a work of fiction. The characters, incidents, and dialogue are drawn from the author's imagination and are not to be construed as real. Any resemblance to actual events or persons, living or dead, is entirely coincidental.

Cover design by Brianne Pickert of Izonu, Inc. You can contact Brianne at
[email protected]
.

Special thanks to Judith Schwartz of FinalEyes Copyediting for helping with edits for this second edition.

Visit the fun, flash website for Rogue Books at www.rogue-books.com

Foremost, to my beautiful wife, Meranda, who put up with various drafts and several years of writing. To my readers, Richard Blass, Mitch Geller, and Dr. Ramon del Castillo.

To all individuals and families subjected to discrimination and brutality by police. To the police that cross the blue line to do what's right
.

M
ax fingered at the pain in his stomach. It was the ulcer, same damn one since he was fourteen. His raven-black, coarse hair bounced listlessly as the armored rescue vehicle pounded through the city streets. A knot grew in his chest. All signs of weakness, nerves, stress. He looked around him at the true examples of men—at least it seemed that way.

Six years ago he had graduated from New York University, around the middle of his class in film school. He quickly learned that the middle meant “unemployable.” It was a brutal industry as the big picture companies barely scraped the cream off the top of each class. One of his buddies got a job shooting a reality show and turned him onto a lead with the ubiquitous show
Police
. Working for a show like that, and not even directing, made his ulcer bleed. But, sleeping on his buddy's apartment floor and eating microwaveable noodles for nine months catalyzed him to get an interview and take the job.

Max was nestled between two men like a boy between his uncle and father—Martinez on his left and Williams on his right. It wasn't that they were older or wiser. It was that they were much bigger than Max. Martinez was probably five-foot-ten to Max's five-foot-five. He had a chiseled face, with terrain markers like defined cheekbones, a nose that had seen its share of right hooks, and thick, black eyebrows. In contrast, Max had a dumpy chin—egged on in size by his affinity for jelly stuffed donuts—pale skin rarely let out into the sun, and a physique that looked like a mason slopped wet mortar onto the ground. Williams was even bigger, stronger and better looking than Martinez. His black skin looked like battle armor, akin to breastplates worn by ancient Grecian commanders.

Williams matched his size with an enormous personality—brash, quick-witted and full of humor. He was the loose one in the group, cracking jokes that doubled Max over sometimes. The weird thing he noticed in these first few months with the group though, was that despite how good Williams' jokes were, not all of the other guys laughed. Specifically, Lindsey and Tomko would only laugh when Shaver did, and he rarely did.

Those three sat on the other side of the rumbling vehicle, conversing amongst themselves as usual. It wasn't hard to notice the dividing line.

Max's gear rested between his feet on the floor of the vehicle.  He stared blankly across from himself with the sound of guns being armed, gear refitted and equipment rattling, lulling him into his trance-like state. This job had some semblance of directing, Max thought to himself. It was a half-hearted effort at self reassurance.

There was no need to check any of the gear as he’d already done that several times before meeting up with the team.  He was meticulous by nature—a characteristic derived from anxiety...which sprung from years of getting bullied in school...which, he concluded, was his parents' fault. That over-protective mother and the typical, worrisome Jewish father. The faint squeal of brakes shook Max from his ruminations.  He instinctively turned his head to Sergeant Shaver for a final briefing.

Shaver was frightening on multiple levels. For one thing, he bristled with muscles. He always sported a skin-tight shave on his head, and looked at people with unblinking, unwavering eyes. There was a violence to Shaver—certainly built and compounded by the rumors surrounding him—that left Max entirely fearful of him at all times. When you had your back to Shaver, it felt as if there was a long, cold knife pressed to the nape of your neck, waiting to slide into your body. He was like a dark pool of water under which was storied to exist something horrible.

“
All right,” Shaver started, “we’ve supposedly got a guy in this house holding his wife and his father-in-law hostage.  Could have a gun, so consider him armed and dangerous.  I want Martinez, Lindsey and Williams around the back.  Tomko and I will take the front. When you hear our flashbangs go off, take out the back door.  Max, you go with Martinez’s group.”

That pleased Max.  It was better to film the group going in from the unexpected entrance.  They would usually catch people sprinting in their direction, vision blurred and ears ringing from the flashbangs.  The people's faces were priceless when they ran into a group of Special Weapons and Tactics officers. An intensely human moment as criminals, who considered themselves hard, rebellious and above the law, surrendered on the ground shaking.  Society's bullies cut at their Achilles.  This is what Max liked to catch on film.

He followed alongside Martinez. They both moved fluidly, silently. How to move was actually a part of Max's training. He had almost tripped, once, but Martinez caught him by the shirt collar before his second knee hit the ground. There could be no surprise if a clumsy cameraman made noise.

When they reached the back porch Martinez raised his right hand and they all came to a stop.  Martinez and Lindsey straddled the door while Williams crouched at the top of the porch steps.  Max steadied the camera on his shoulder. They all tensed, waiting to hear the flashbangs explode.  Glass shattered and then two deafening bangs sounded.

Williams rushed forward and planted his foot on the back door.  It burst open and Lindsey rushed into the house screaming, “Police!” Williams curled around the door and then Martinez slipped into the house. Max fell into line behind Martinez who was scanning rooms with his gun.

The house appeared to be well-kept, was warm and smelled like recently cooked food. There was colorful, Spanish pottery in the two rooms Max saw. Lindsey yelled out his identification again.  This time a frightened cry echoed him.

Martinez and Max approached a hallway that ran adjacent to the main living area. Shaver got there first. The six of them lined the hall and waited for Shaver's order.

“
What, just 'cause my name is Martinez? I don't speak Spanish.”

“
So you don’t speak illegal.”  Martinez and the Sergeant stood on either side of the door, not yet in the room. “Martinez, tell these wetbacks to put their hands up.”

“
Man, screw you.”  Max cringed at the exchange.

“
All right then.”  The Sergeant directed his voice into the room.  “Put your hands up right now!  This is the police!”

Shaver turned into the room and fixed his weapon on a woman lying on her side.  Martinez followed while Max filmed through the door.  Max saw a young woman crying on the floor and guessed she was probably in her twenties.  A trail of tears marred her face.  An older man was rigid on a couch next to her.  His eyes were open, but his gaze was not fixed on anything definite.  A blanket covered his body up to his neck.

All of the officers lowered their weapons and Lindsey muttered, “What the hell are we here for?”

The young woman's body convulsed as she sobbed on the ground. There was no sign of any son-in-law.

“
Hey, old man, get your hands out from under the blanket,” Shaver said.

“
No hablamos Ingl
é
s
,” came a moan from the woman on the floor.

“
Shut up,” Shaver said.  He took a step toward the man, who still appeared disoriented.

“
Old man, get your hands out from under that blanket!”

Max panned back to the old man and zoomed in on his face.  His eyes were expressionless.  Max wondered if the man was dead. At a minimum, he obviously had no idea what was going on.

Shaver turned around and gave Tomko a look of disgust. “Today's learning lesson Tomko. They come to your country, and don't speak your language.”  Sergeant jabbed the old man on his shoulder with the muzzle of his gun.  Still no response.

“
El no te entiende
!” the woman shrieked from the floor.  She started to prop herself up to say something to Shaver but he mocked her language with a barrage of “chinks” and “chongs” as he loomed over her.

“
Sergeant, let’s just cuff ‘em and get out of here.  They don’t understand a thing,”  Martinez said.

“
Forget that, these wetbacks are gonna learn a lesson.”

“
What the hell are you talking about?” Martinez responded.

“
Just watch me.”  Tomko and Lindsey turned their heads and pretended to adjust their weapons.

Shaver stepped forward and pressed the muzzle of his rifle against the old man's temple.  “Move your hands old man.”  No response.  Max pulled his shot back to capture the Sergeant.  Somehow, the camera's shift in focus caught his attention.

“
Scrub, shut that camera off.”

“
Just do what I fucking say!” Max set his camera down on the ground.  “That better be off scrub.”