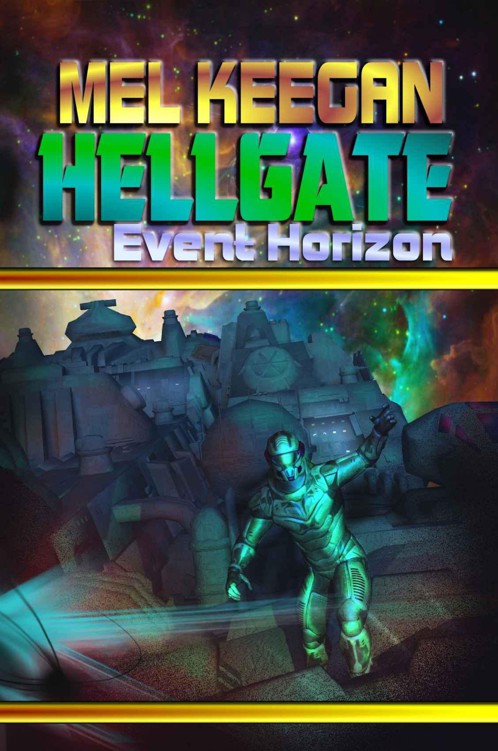 This book is a work of fiction. Any similarity between real persons or other characters, alive or dead, is strictly coincidental.

This edition published in December 2013 by DreamCraft Multimedia.

No part of this publication may be reproduced or used in any manner whatsoever, including but not limited to lending, uploading and copying, without the prior written permission of the publisher.

Oberon swam like a shadow against the bright, stormy face of
Hellgate
. The spines of the science platform’s comm aerials were picked out in hazard and navigation flares, and scores of lights winking from the long observation ports marked the presence of humans aboard. A civilian science ship from the Drift Research Institute on Borushek had docked twelve hours before, and in the last ten hours the crew had been generating noise that would have made any Resalq cringe.

The science team had come out to align the active resonance arrays, and Neil Travers knew the work could only be done one way. Emitters fired a tight pulse into the J-layer, the outermost shell of the e-space conduit. Receivers fed the pingback to one of the most powerful AIs in the Deep Sky, and interferometry yielded data on the constant dimensional flux of Rabelais Space.
Transspace
.

The technique was simple, but it was loud. It rendered Oberon the brightest object in the region, intermittently as bright as one of the supergiant stars which were the handmaidens of dark Naiobe, the black hole which lurked like a master sorcerer at the heart of Hellgate, and much brighter, noisier, than the leftover hiss and throb from a Class 3 Event which had bloomed like a blood rose, just forty light minutes from Oberon’s position, not three hours before.

In a time when frontier worlds like Saraine were deliberately being powered down to run cold and silent, offering nothing to betray the presence of industry, civilization, the noise emanating from the science platform set Travers’s teeth on edge.

The last pulse fired from Oberon was so powerful, local comm sheeted out into pure white noise for over twenty seconds. As it subsided Curtis Marin’s voice swore softly over the loop, but it was Jazinsky who barked into the highband comm. Travers had been monitoring it since the
Harlequin
launched from hangar six. “Danny, for the love of whatever you like to call god, will you put a lid on it!”

She was bawling at Danny Ramesh – she knew him, though Travers did not know from where. Ramesh headed the DRI team, and to Travers’s ears he sounded like a reasonable enough man. He and Jazinsky had almost certainly collaborated many years ago on some project, but though they greeted each other as friends when the science vessel
Tycho
docked at Oberon, Jazinsky’s patience swiftly frayed. Danny Ramesh had no idea how much danger his team was inviting with the constant pulses into the J-layer, and his own temper was on a tight leash now.

“No can do,” he told Jazinsky. “I’ve told you before, we’ve got a twenty-hour window to get this job done. You know the drill, Barb. You’ve done this kind of work yourself.”

“We have crews in space, Doctor Ramesh.” Richard Vaurien’s voice was on the highband now, level with the tone and meter of the peacemaker. “You’re blanketing our comm traffic. This can get ugly.”

“And I’m still on a deadline,” Ramesh said with a shade more pleasantry than he had harbored for Jazinsky in the last ninety minutes.

“Give us two hours,” Richard proposed.

“Two hours would put me so far over our time budget, my ass is going to be hoisted in a sling, back at base. Look, Vaurien, just get off my back, let me and my people get this done, and then we’ll get out of your hair and you can go back to whatever the hell it is you’re doing.” Ramesh paused, more than likely to address a member of his team.

“Let me offer a bargain,” Vaurien said into the brief silence.

“You’re going to bribe us to delay?” The man from Borushek was amused enough to at least listen. “Watchya got?”

“What do you want?” Vaurien asked with a trace of annoyance which perhaps only Neil Travers would have heard.

Twenty meters away a shape moved in the harsh shadows cast by the worklights, and he turned toward it. Marin was there – like Travers himself, black-armored and moving methodically from one sequence of tests to the next. Travers saw himself reflected in the half-opaqued faceplate of Marin’s helmet, watched himself wave as Curtis came closer.

The armor they wore had rolled out of the fabrication shops so recently, the surface still carried no decals. It was experimental, and though the design was similar to the standard industrial armor preferred by most salvage operators on both sides of the frontier, it felt
different
. The difference was in the mass. This armor was more than triple the weight of the regular suit, and the Aragos were adjusted to compensate. A bare split-second of lag time separated the force-input of Travers’s physical movement from the response of the suit, but it was enough for his brain to register, and it made the armor feel a tiny fraction ungainly.

For half an hour he and Marin had paced the hull of the
Wastrel
from the cranes and gantries on the starboard side, which gave the ship the familiar aspect of a hunchbacked troll, to the indented pods on the port side, where the geocannons were cold and dormant above the mid-ship holds. From the vantage point of the hull itself, the ship presented a bizarre landscape of hackles, dishes, domes, rails, hatches, in the shadow of the gantry cranes. In all the years he had been associated with Richard Vaurien’s operation, Travers had never worked out on the hull. Normally only drones saw this part of any ship. Hundreds were stored in bunkers down the length of the spine and keel; they would come online when the AI woke them, scuttle out to their task and then retreat to storage.

Drones could have tested the new armor to a point, but Vaurien and Jazinsky wanted a skerrick more data than machines could deliver. They wanted the human reaction. The
Wastrel
was rarely shorthanded, but with the
Wings of Freedom
and the
Earthlight
standing by Lai’a and the
Esprit de Liberté
still fitting and testing engines at Alshie’nya, Travers and Marin had volunteered. Jazinsky was quick to hand them an assignment.

“Two hours, and we’ll be out of
your
way,” Vaurien was saying. “If I have to negotiate – if I have to buy the safety of my people for that time, I’ll do it. Name your price, Doctor Ramesh.”

A soft chime in Travers’s left ear told him Marin wanted to talk privately, and he switched back down to the
Wastrel
techs’ loop. “Ramesh’s crew could get themselves into real trouble, Richard. This kind of noise –? It’s insane, though they don’t know it.”

“And we can’t come right out and warn them,” Vaurien said in the same quiet, measured tone he had used with Ramesh. “The data is categorized Zunshu, Curtis. It’s classified.”

“Even if it kills them?” Travers was watching the sternflares of the
Harlequin
as Hubler and Rodman maneuvered in the darkness several thousand meters off the aft starboard quarter.

“Even if.” Vaurien sighed. “Give me a few moments, Neil. It’s not impossible Doctor Ramesh has a venal streak as wide as any politician, and if he does –”

“You can buy enough time for us to get done and bug out,” Jazinsky said tersely, “and leave these idiots to it. And before you say anything, Richard, I know. It’s classified, and there’s the end of it. The best you can do is protect our own. Goddamn!”

It was bad, and Travers was equally aware of the ruthlessness of their assignment. “Let it go, Barb,” he said as Vaurien returned to Ramesh and began to barter. “This one’s not our call to make.”

“And we have work of our own,” Marin added sharply. “We’re not out here for the childlike fun of playing in these suits! What do you want next?”

The armor might be the same design as routine industrial hardsuits, but the similarities were superficial and the differences could throw one’s equilibrium way off. The triple mass, the slight lag in the response, betrayed the disparity. Jazinsky called it Zunshulite. Travers thought of it as an alloy of the kevlex-titanium that had been conventional for centuries and the Zunshu armor which sheathed the ancient, alien devices, but he knew the term was a misnomer.

No technique existed to forge the Zunshu metal, much less alloy it with other materials. Instead, the stuff for which Jazinsky had coined the term Zunshulite was fractured at the molecular level by particle beams, reduced to a heavy, toxic crystalline dust and fired, like a trillion microscopic projectiles, at the kevlex-titanium matrix. Super-hard, super-dense, the fragments of Zunshulite embedded into the woven strands of the parent material, and the result was revolutionary.

“You get used to it after a while,” Marin was saying into the busy techs’ loop. “The lag’s only about a tenth of a second, but it’s damned weird at first. A little like wading in a lake of treacle up to your armpits. Then the brain learns to compensate.”

“So you think you can move in it, work in it, for a realistic amount of time? Enough time to get some kind of difficult, precarious assignment done?” Jazinsky was in the lab, reading telemetry from the flocks of sensors mounted on the suits and already collating data.

“It shouldn’t be a problem,” Travers told her. “The lag’s a nuisance for a few minutes. The servos can only catch up so fast … but I’ve worked in Marines armor with grav-resist that was jacking around, and a hell of a lot worse to live with than this. In the field you can easily take a hit in the Arago cells. The damn’ things can go intermittent and your apparent mass can be all over the spectrum. You deal with it.”

“
Soldiers
deal with it,” Jazinsky argued.

“And most of us went through the Fleet meatgrinder,” Travers reminded. “Even Richard did six months on a carrier before he took his virgin furlough and kept walking! You? You’re the anomaly. Any of the rest of us would muddle through without too much cussing, even if the armor was a genuine bitch to work with. The lag’s not that bad, Barb.”

“And the rest is fine,” Marin added. “I’m cool and dry, the vid feed is top quality, the displays are absolutely stable and the comm is 20/20 unless those idiots on Oberon are firing another pulse into the Drift.”

“They’re the proverbial pain in the ass, aren’t they?” Jazinsky muttered, concentrating on the datastream. “I’m almost ashamed to say I know the
idiot
in charge. I took Physics 901 with Danny Ramesh – we were kids, something like sixteen. Before the draft notices were posted, anyway. He went into Fleet maybe two months after Richard spirited me away before they could get their hooks into me. Danny finished his degree on the
London
.” She sighed. “And the fact is, none of this crap is actually his fault. Nobody at the DRI knows any damn’ thing about the Zunshu. Not yet. They’re doing the exact kind of work Alexis Rusch wanted to get into – it’s the whole reason she enlisted.”

The Puzzle of Left-Handedness by Rik Smits
Azteca by Gary Jennings
Heart of a Rocky by Kelsey Jordan
Slouching Towards Bethlehem by Joan Didion
Jodi Thomas by A Husband for Holly
Silesian Station (2008) by David Downing
A Wrinkle in Time Quintet by Madeleine L’Engle
I Never Had It Made by Jackie Robinson
After the Winter (The Silent Earth, Book 1) by Healy, Mark R.
Shudder by Harry F. Kane