Read Fifty Shades of Alice Through the Looking Glass Online

Fifty Shades of Alice Through the Looking Glass 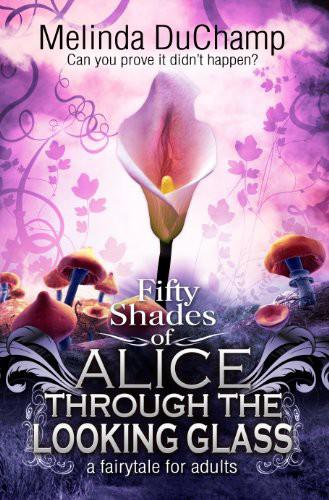 A Fairytale for Adults
Can You Prove It Didn’t Happen?

FIFTY SHADES OF ALICE IN WONDERLAND WAS JUST THE BEGINNING…

NOW SHE MUST TRAVEL THROUGH THE LOOKING GLASS…

After breaking up with her boyfriend, Lewis, Alice enters a strange fantasy world where every pleasure—no matter how kinky—is indulged.

Alice is subjected to amorous escapades beyond her wildest dreams, and taken to the very limit of sexual endurance. During her carnal encounters with all manner of men and women, she is teased to tears by a bondage master, thoroughly used in a three way, enlightened to the sensual joys of a female touch, taken to a sex shop to test different erotic toys, given several very special piercings, and is dragged to the Hall of Denied Orgasms where she must fight the frumious Jabbercocky to save all of Looking Glass Land. And you know what we mean by “fight”…

CHAPTER 2. The Garden of Live Flowers

CHAPTER 7. The Lion and the Unicorn

CHAPTER 8. “It’s My Own Invention”

CHAPTER 12. Which Dreamed It?

One thing was certain, the
white
kitten had had nothing to do with it—it was the black kitten’s fault entirely. For Snowball had been having her face washed by the old cat for the last quarter of an hour (and bearing it pretty well, considering), so she
couldn’t
have had any hand in the mischief.

The kitten rolled around on her futon, as if he couldn’t care less, while the mother cat, Alice’s dear Felcher, finished with the white kitten’s bath.

Alice threw the ruined dress onto the floor and eyed her naked body in the full length mirror. She’d heard horror stories about the freshman fifteen—those extra pounds co-eds famously put on in their first year at college from too much fast food and beer—and she was adamant about not letting that happen to her. But lately, she couldn’t seem to prevent stuffing her face with chocolate, causing most of her sexiest clothes to no longer fit, and that was all Lewis’s fault.

She still couldn’t believe what she’d seen that morning after Lewis had stayed over. Alice had walked in the bathroom and—oh my dear—he’d been standing in front of the mirror wearing her frilliest, laciest, pinkest panties and stroking his stiff manhood through the silk.

“Lewis! You’re gay?” had been the only words that she’d been able to push through her lips.

Of course, he’d denied it, claiming he just found wearing pretty, girly things to be a turn-on. But she hadn’t believed it for a moment. Lewis—her Lewis—was obviously not interested in women other than their underwear, and so she’d broken up with him on the spot.

And all this because of a kitten.

Alice took a deep breath and decided not to think about the cats anymore, because that would be frightfully boring to read about. But sex, on the other hand, was always fun, so with this in mind, dear reader, she peered into her underwear drawer, and rather than selecting a bra and panties, she dug out a long cylindrical device from underneath the underthings.

Alice ran a finger from the base of the device, over the two ear-like stimulators, and up to the firm yet flexible tip. She’d once been told that sex is only partly about friction and bodily fluids. The majority of it takes place in the mind. If she had nothing decent to wear to the party, so be it. She would find her release right here.

What would the frat boys think if she showed up at their party with breasts bared and nipples protruding as if begging to be sucked and teased?

What would Lewis think if she let the whole party of men fondle her?

The prospect of all that male attention focused on her made a delicious throb start between her legs.

Alice moved the head of the rabbit down, over her belly, tickling and teasing.

Lewis had shaved her secret garden, and even though she hadn’t had sex since the breakup, Alice had kept it smooth, though she wasn’t certain why. Now she sat on the edge of the futon and opened her thighs wide in front of the mirror.

Even though Lewis had seen her special place down there many times, Alice had never really had the occasion to look. Not completely. Not altogether. But now seeing herself spread open, she was somewhat fascinated with her delicate, pink folds, the shape of her clitoris, the deep mystery of her most private place.

What if she went to the party bare from the waist down? Or best yet, totally naked? Would the frat boys touch her and lick her? Would they all take off their own clothes, their masculinity hard and straining to plunge inside her?

A tremor built inside her loins. A hunger. A need.

Alice toyed with her opening, moving the vibrator around and around, but never really touching the place she wanted to touch most. Her nether lips glistened, her juices flowing in abundance, and when she finally nudged the rabbit between her folds, her need was so immediate she made a keening noise deep in the back of her throat. It filled her so completely, so utterly, and she felt the rotating beads undulate and brush against her G-spot with each gyration. Alice watched, shuddering, as she stretched open to accommodate the rabbit’s full length, imagining it wasn’t a sex toy, but instead a lover ravenous to satisfy her.

One stroke, then another, and Alice’s legs were already trembling.

Alice met her own thrusts, finding the rhythm she liked. She wanted so badly for this to be real, and not plastic and batteries. To be giving a man as much pleasure as she was receiving.

Then her hips started bucking, and she slid off the bed.

“Oh, heavens!” Alice exclaimed. Embarrassed, she glanced around, even though she knew no one but the kitties were watching.

Hmm. She eyed herself in the mirror, sitting on the floor, legs splayed and rabbit still buried inside. A dirty, wicked thought entered Alice’s head: What would it be like if someone really was watching her? Watching everything she was doing to herself?

Alice withdrew the device and climbed to her feet, the idea spinning through her mind and causing the excitement already thrumming within her to ripple over her skin. “If someone was watching me through the mirror, what would he like to see?” she asked no one in particular. “Would he like to see me do this?”

“Oh, yes. If someone was watching me through the looking glass, he would like this,” Alice said, even though she really couldn’t know. But Alice knew that she liked it, and when in the act of pleasuring oneself, that was the only thing that mattered.

“Would you like to see me come?” she asked the mirror.

She flipped the switch and the rabbit sprang to life (not literally, although that was not out of Alice’s realm of imagination). The hum electrified her, and for a few minutes, it was all she could do to keep her balance. But as she recovered, she began to move the device, pulling it out to her outer lips, then sinking it deep into her pleasure cave.

Every time she went deep, the rabbit’s “ears” touched her most sensitive place, and every time they touched, she let out a little yip. The pressure built within her, bringing her close to what she wanted, close to the edge. Her hips started to thrust. Her breasts started to buck and swing. They swung faster and faster—

—and she spilled forward and fell through the looking glass.

Though she hardly knew how she had gotten there, Alice landed on her hands and knees on the cushy throw rug in the mirror image of her room.

“Oh my, that was athletic,” said a male voice.

“My word, is that kind of position even allowed?” queried a woman.

“I’m sure it isn’t. I’ll consult my book,” said another woman in an authoritative voice that sounded as if she was scolding while looking down her nose.

Alice shook her head, trying to clear it, then she sat on her bare bottom and turned to face the voices. She was unsure of where she was, or how she’d gotten there, or who they were, but the thought that they’d been watching gave Alice a terrible thrill. The rabbit had somehow slipped out of her, leaving Alice throbbing with unresolved need.

But with all of these people in the room, Alice secretly hoped she wouldn’t need the rabbit anymore.

Two men sat at a small table in front of the mirror, staring at her, one wearing a red bathrobe and one dressed in white. Both were handsome and older, maybe even as ancient as their (gasp)
forties or fifties
, and both wore crowns on their slightly salt-and-pepper heads. A woman stood near them dressed in a white lace bra, garter belt, stockings and heels, her knees apart and her private place open for all to see. She wore a silver tiara atop her platinum blond updo, and on the table in front of them, a chess board was spread, the pieces poised mid-game.

Alice blinked her eyes, but when she opened them, the three were still there. “Are you—”

“Two kings and a queen? Why yes, we are, dear,” the woman finished for her.

Alice should have felt embarrassed, as any girl lying naked on the floor in front of strange royalty might. But her first thought beyond how in the world she’d fallen through the mirror, was how rare it was these days to see people playing that particular game.

“Are you playing chess?” she asked.

The Red King nodded. “I loved when you bent forward at the waist and your tits bucked with each stroke.” He brushed aside his robe to reveal his erect manhood folded in one fist.

Even the White Queen nodded. “Yes dear, your tits are quite magnificent. Such perky nipples.”

Alice rubbed her eyes. Surely she must be dreaming. She couldn’t have fallen through a mirror; that wasn’t even believable in fairytales. But when she opened her eyes once again, the kings and queen were still there, only the Red Queen had joined them. And dressed in red leather pants and matching bustier, she was frowning something awful.