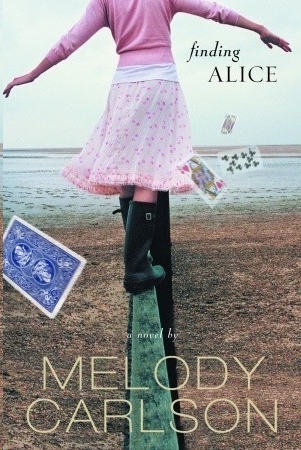 “Kudos aplenty for Melody Carlson’s latest,
Finding Alice
. We tumble down the dark hole with Alice and hope against hope that the voices she sorts through on her otherworld journey will take her at last to a peaceful place. All the while we wonder: How do we make sense of the sometimes competing voices that bombard us each day, voices of news and neighborhood, charity and church? Is that person a friend or foe? How will we know? And most important, will we find the one voice we’re meant to listen to before someone like Alice’s friend Amelia threatens and turns us away? This is a compelling story filled with insights not only about mental illness but about what passes for normal in a sometimes crazy world. I kept reading, knowing that in finding Melody Carlson’s Alice safe at last, I’d be finding a part of myself.”

—J
ANE
K
IRKPATRICK
, a licensed clinical social worker and best-selling author of
A Name of Her Own
and
Every Fixed Star

“Finding Alice
is a journey to one of the most unusual places I’ve ever been. Melody addresses the complex issues of mental illness with wisdom and compassion, painting a subtle portrait of healing grace. I believed every word.”

“Finding Alice
takes us down the rabbit hole of mental illness and gives us a looking-glass view of the pain of schizophrenia mixed lovingly into the grace and mercy of God’s love. Melody Carlson’s style is mature and bitingly funny, and her gift for connecting our heart to the character’s plight also connects us to the complicated human condition and our need for one another.”

“Melody has crafted a superb story that takes readers into Alice’s mind and world. I was captured from the first page and filled with a deep sense of hope by the last page. This book will bring insight and courage to anyone who has an Alice in their life.”

—R
OBIN
J
ONES
G
UNN
, best-selling author of the Glenbrooke series and the Sisterchick novels

“Finding Alice
offers the riveting journey of a young woman teetering on the edge of reality. Melody Carlson skillfully creates Alice’s schizophrenic world and then brings this endearing character to a place of genuine hope. I laughed and cried and cared deeply for Alice. Thank you, Melody, for an enlightened and compassionate story!”

“The Christian community has not often known what to do with the very real and deeply complex issue of mental illness. In
Finding Alice
, Melody Carlson confronts it in an insightful and creative way, providing clues to its nature and treatment and reminding us that Hope lives even in the dark worlds of such illnesses.” 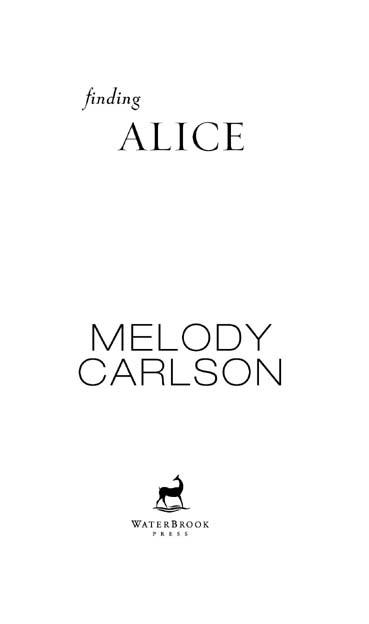 The characters and events in this book are fictional, and any resemblance to actual persons or events is coincidental.

All rights reserved. No part of this book may be reproduced or transmitted in any form or by any means, electronic or mechanical, including photocopying and recording, or by any information storage and retrieval system, without permission in writing from the publisher.

Published in the United States by WaterBrook Multnomah, an imprint of the Crown Publishing Group, a division of Random House Inc., New York.

Dedicated with love to Gabriel Douglas Carlson,
one of the bravest men I know.
Without your help and expertise, this book would not exist.
Thank you for sharing your life and experience with me.

Chapter One - Down the Rabbit Hole

Chapter Four - The Pool of Tears

Chapter Five - Off with Her Head!

Chapter Eight - Advice from a Caterpillar

Chapter Fifteen - Neither Here nor There

Chapter Eighteen - In the Mean Time

Chapter Twenty-one - Through the Looking Glass

Chapter Thirty-five - My Own Invention

A Word from the Author

Down the Rabbit Hole

I
’m not sure how it all started or even why. I was simply walking through my life, minding my own business, when someone pulled the earth out from under me. And I began to fall, down, down, down. Yet I don’t think I even realized I was falling, at least not in the beginning. It felt more like a curious adventure. Not so unlike another Alice I once knew.

I still remember that rainy day back in the fifth grade when my mother caught me reading
Alice’s Adventures in Wonderland
. It was during spring break, and I was bored silly and had decided to snoop around our musty attic while my mother went to the store. I discovered this book, along with a few others, packed neatly into an olive drab metal footlocker that appeared to have survived some ancient war. I’m guessing it had belonged to my grandfather who served in the Pacific during World War II. My mother’s maiden name was written in a childish script inside the book cover, so I assumed this book must’ve belonged to her at one time—another lifetime ago. Although I felt certain she would never admit as much, not to me anyway. I also suspected this was
not
a book that our
fundamentalist church would approve, since it was neither historical nor biographical and definitely not biblical. I could imagine Miss Finley, my teacher at the conservative Christian school, raising her eyebrows in dismay to see her star pupil resorting to such “worldly trash,” as I’m sure she would have called it. But I was drawn to it anyway.

For one thing, the odd looking young heroine’s name was the same as my own. Plus we both had curly blond hair, only hers was much longer and cut bluntly across the ends, similar to a broom, I remember thinking. And I’ll admit that the story seemed a bit strange as I first started reading, unlike anything I’d ever seen before, but I was quickly pulled in and had just reached the part where the Duchess throws her howling baby (really a pig) at a confused Alice when my mother walked in and startled me.

“What are you doing up here, Alice?”

“Reading.” I closed the book and placed it facedown in my lap.

My mother stepped closer with a worried expression drawing her brows together in a way that creased her forehead. “Oh, dear, you’re not reading
that
, are you?”

Mom moved a step closer. “They say the author was on drugs when he wrote it,” she announced in a flat voice.

I frowned. Even in my sheltered little world, I knew that drugs were bad. “How do you know he was on drugs?”

“Everyone knows that.” Then she held out her hand for the book.

Feeling cheated and wondering what would become of poor Alice, I relinquished my prize. It wasn’t until I was seventeen, when I was finally allowed to attend public school, that I finished reading that book as well as its sequel,
Through the Looking Glass
. But the stories, although intriguing, had lost some of their magic by then. Somehow they just didn’t seem quite the same. Or maybe it was me. I read them again for an English literature project just last year. My theory was that a secret code was contained within the rhythmic text, and I did manage to unwind something or other, or so I thought at the time. Although my professor told me I was “stretching things a bit.” I think those were his exact words too. Of course, he didn’t seem to have much imagination either.

But back to falling down my rabbit hole. Back to when my own strange “adventures in wonderland” began. So there I was just starting my senior year of college, maintaining a fairly decent GPA, dating someone I thought I loved, and basically keeping my life on track. But the next thing I knew I was getting locked in the hospital by an old coot in a stained lab coat.