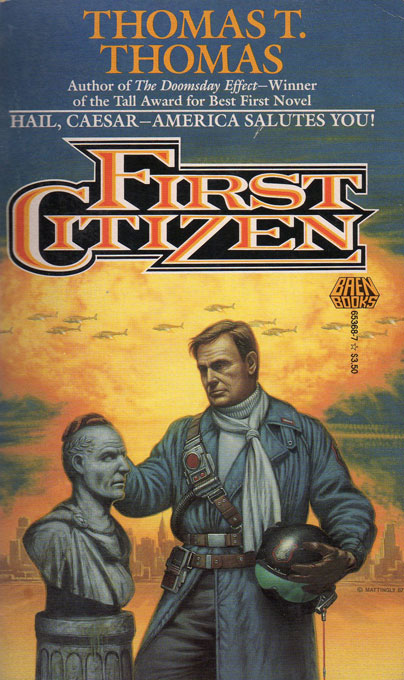 The world according to Quantum Mechanics:

Anything can happen at least once. Therefore, given infinite time and space, the impossible happens regularly. … Change is the only constant.

And according to Granville James Corbin:

Reality is what you make of it.

Originally published in 1987,
First Citizen
is an alternate history of the United States. Readers will notice that certain events recalled by Granny Corbin and Billy Birdsong—such as the invasion of Nicaragua, the XXVIIIth through XXXth Amendments to the U.S. Constitution, and the bombing of Washington, D.C.—may not coincide with their own memories of recent history. This is to be expected. Things started going wrong late in the 1980s. After that, they only got worse.

Recent Amendments to The Constitution of the United States

The fourth section of the fourteenth article of amendment to the Constitution of the United States is hereby repealed. The Federal government shall incur no debts nor make any promises of repayment of debts to any person, party or nation.

All debts of the Federal government in existence at the time this article may be ratified are hereby repudiated.

This article shall be inoperative unless it shall have been ratified as an amendment to the Constitution by the legislatures of three-fourths of the several States within seven years of its submission to the States by the Congress.

Article I, Section 8 and the sixteenth article of amendment to the Constitution of the United States are hereby amended to revoke the power of the Congress to lay and collect taxes (including general income taxes), duties, imposts, and excises, to pay the debts and provide for the common defense and general welfare of the United States.

In 1997 the U.S. government was a debtor to the tune of $18.2 trillion, an amount more than six times the country’s gross national product. The country’s balance of trade was twelve to one against.

For almost two decades, various administrations had wrestled with Federal deficits and the growing national debt. Self-imposed budget restraint and legally imposed spending cuts both had failed to curb the people’s appetite—exercised through Congress—for a free lunch. No one had the courage to raise taxes to the levels needed to fund the government: That would have had the same effect on the faltering economy as a stone tied to a sackful of bravely swimming kittens.

Of course, when these amendments were proposed, debate raged furiously across the country. Half the electorate and most of the media’s opinion leaders claimed it would impoverish the elderly and disadvantaged, imperil the national defense, and destroy the American Way of Life. The other half claimed that a prime rate of thirty-five percent and inflation at 300 percent were well launched toward those ends.

When the amendments were finally ratified, the Federal Government adopted, in place of taxation and deficit spending, a fee-for-service system. Licenses and fees supported those judicial and regulatory functions without which society would have foundered. The administrators of these functions no longer petitioned for their budgets before some congressional appropriations committee. Instead, they paid costs and salaries out of income, like any business. And they sent a percentage—a profit—upward to General Funds.

High tariffs and a system of limited monopolies protected the country’s markets, igniting a wave of price-pull inflation that, for a while, felt like prosperity.

Postal and police services were farmed out to the commercial express and security firms which had already appropriated these markets among all but the very poorest users.

The military establishment was broken and turned over to public subscription and private contracting. The former supported a core of government-employed strategic planners, diplomatists, and operators of the nuclear arsenal. The latter supplied weapons, material, and a mixed body of volunteer regiments and mercenary troops.

The rest of the government—the masses of career bureaucrats and clients of the welfare state—were abandoned like the blackened carcass of a beached whale. And with time they were absorbed into the general prosperity, as rind and blubber are absorbed by the tide, the salt, and the sand.

For a while in 1997, the U.S. government was a debtor; ten years later it had become the richest organization in human history, with liquid resources exceeding those of any emperor, tsar, or pope.

Article II, Section 1 and the twentieth article of amendment to the Constitution of the United States are hereby amended to provide expeditiously for the succession of the President, in the event that both the President and the Vice President are simultaneously removed from office, die, resign, or otherwise become unable to discharge the responsibilities of their respective offices. In such case, the Speaker of the House of Representatives shall assume the powers, duties, and prerogatives of the executive branch and retain them until such time as a special election may be called to fill the vacated offices.

This surprisingly simple piece of legislation was proposed and swiftly passed after the Hundred Lost Days, which began December 19, 2002. On the surface, it is merely a clarification of procedures that are addressed—but not entirely resolved—in earlier constitutional amendments.

The Thirtieth Amendment is hardly the sort of sweeping reform that one would expect to come out of the power brokering and confusion of those three months. It is at best a firecracker compared to the big gun of the Emergency Powers Act, which ended the Hundred Days. However, this amendment—not the Act—was the foundation upon which House Speaker George McCanlis assumed the power of the executive. And he did not let go for a long time.

Twenty years after this insidiously flawed legislation was ratified, legal scholars would note that “Speaker” is an exact translation of the Latin word
dictator.

I was born at Whistling Winds, North Dakota.

At least that’s what the official histories will say. Actually, the event occurred within eight miles of the place—straight up. We were at 39,000 feet at the time, my mother and I, on a polar flight from Los Angeles to London. She was more than seven months pregnant, looked six, and claimed only five—although what fun she thought she could have in London while seven months pregnant, I don’t know. But she was, after all, Jennifer Corbin, nee Scoffield, of the Houston Scoffields, and a more self-determined woman did not breathe.

I did once visit Whistling Winds, in a professional capacity some fifty years later, during the Civil War. It reminded me of a false-front set for a small western town. Half a dozen single-story buildings stood along the main road. Only the old United States Post Office had any stone or brickwork on it, the rest were gray wood that might years ago have been painted brown or blue. Everything seemed temporary, made for show and, if you opened a door and stepped through, you’d be standing in dead prairie grass with the wind blowing in your ears. Everything looked like it would blow away across the flats. Except the grain elevators: They leaned over the cluster of buildings like a piece of mountain landscape.

The residents, all six of them, were gray people, too. Wheat farmers, they had long ago been edged out by agri-business strategies, expensive technology, and the better rainfall in other, kinder States. If they had heard my claim of de facto citizenship, they would have been impressed not at all, no matter who I was.

There is a story, still told by my enemies, that Mother’s labor was so long and terrible I had to be delivered by caesarian section. That an obliging doctor on board was forced to operate using only morphine, a scalpel and a packet of 00 sutures from his black bag. The experience was supposed to have crippled Mother, destroying even her capacity to have sexual relations, and thereby embittering my father toward me before I was actually born.

What did my younger sister ever make of these tales?

In some versions, the doctor orders the pilot to divert to Winnipeg, and I am cut away from the womb there. In others, he delays the operation until the plane is over the Irish Sea on final descent for Heathrow.

All are lies. I was delivered promptly into the hands of flight attendant Kimberly Johnson, of Fort Wayne. She was a cheerful girl who, so Mother claims, had a practical nursing license and kept her head at all times.

However, because I was two months premature and below the average birth weight, my first visit to London was spent “in hospital,” as the natives say. But otherwise I suffered no ill effects: no congenital weaknesses, neither limp, nor palsy, nor slurred speech, nor mental retardation, nor fondness for exotic sexual prosthetics—no matter what my enemies may claim.

Was Father on that London flight? Of course not.

Let’s see, the year was 1970, so he would have been in the United Arab Emirates, tidying up reserve estimates. Peter Corbin was senior geologist with Petramin Oil and claimed to know, personally, where more crude was buried than the Japanese could buy in any six good years.

The year before I was born, he had been in transit between Palembang and Prudhoe Bay. Mother had absolutely refused to relocate with him to Indonesia. And the closest she would come to the North Slope was Valdez, where she believed she could pass the winter in a detached house with central heating and clean sheets. After six months of looking at black ice and listening to the wind, Jennifer put her high heel down and insisted on living forevermore in the Lower Forty-Eight and occasionally in Europe, because she could afford to. Let Peter chase around the heathen world taking core samples where he may.

It’s a wonder I was ever conceived.

However, life was almost normal when I was a boy. And that’s odd, considering those were the years of the great Arab oil embargo and the first energy crisis.

When I was old enough to participate in the confusion of moving, packing my own toys and helping label the book cartons with my crayons, we moved to Marblehead, Massachusetts. I must have been about five, because I wasn’t in school then, just the next best thing to an Animal Farm penitentiary, called pre-school. Why is it that all teachers of very young children seem to be latent socialists? That political outlook must make it easier, morally, to quash their individual and creative energies.

My first memories of Marblehead are of the statue, down on the green grass along the seawall, of the bronze fisherman at the wheel in a rain-slicked sou’wester and oilskins, in memory of those who go down to the sea in ships. Peter, my father, was mostly off at sea himself, sailing around the Georges Bank on a research ship, dropping charges and scaring the cod. I always associated him with the bronze man.

Last Resort by Susan Lewis
The Mysterious Death of Mr. Darcy by Regina Jeffers
A Face To Die For by Warburton, Jan
Irish Rose by Nora Roberts
The Reluctant Wrangler by Roxann Delaney
All These Perfect Strangers by Aoife Clifford
Ink by Hal Duncan
Castro's Bomb by Robert Conroy
Nursing on the Ranch by Kailyn Cardillo
Almost Identical #1 by Lin Oliver