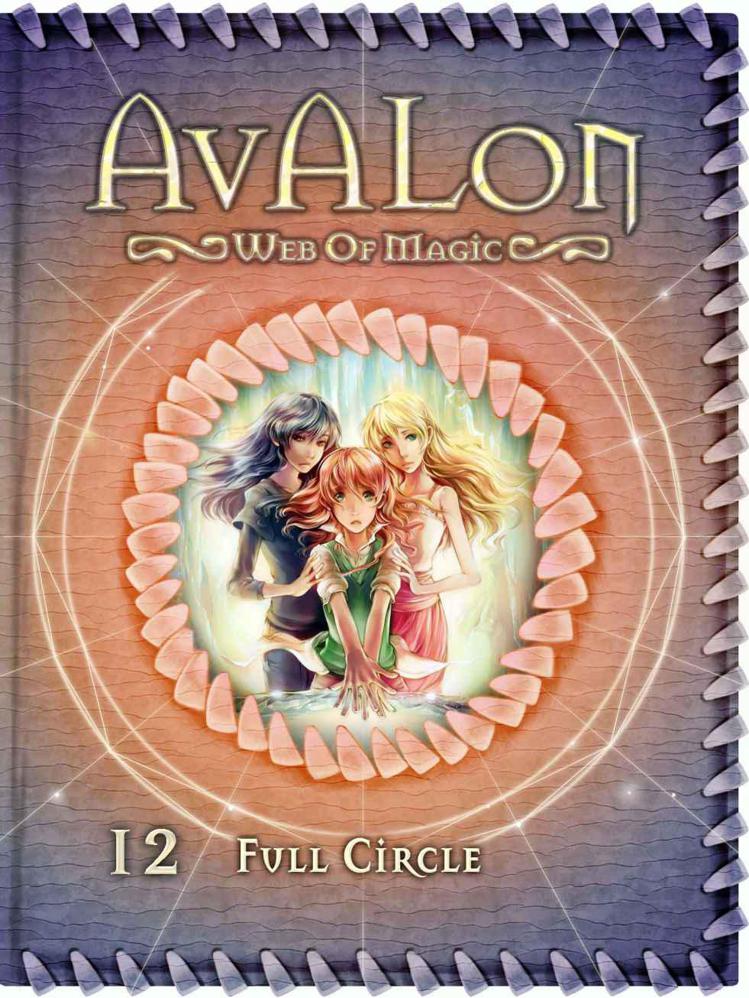 All rights reserved. No part of this book may be reproduced or transmitted in any form or by any means, electronic or mechanical, including photocopying, recording, or by any information storage and retrieval system, without written permission from the publisher, except where permitted by law.

Electronic Edition
Published by Premiere Digital Publishing, Inc.
Made in the U.S.A.

T
HE DARK MAGE
sat astride her paladin, overlooking the new magic web like a commander surveying the battlefield. Glimmering strands formed perfect diamond patterns that stretched to the horizon and beyond. With her magically enhanced vision, she could see the entire structure, a vast spiderweb of highways that connected worlds.

Hundreds of unicorns surrounded her, pawing the ground, eager to run the glowing strands and spread magic wherever she desired. The dark power of Avalon swirled above them in a seething cloud of ruby, emerald, and amethyst. The dark heart jewel upon her wrist pulsed in sync with the luminous, shifting hues.

Glints of light flecked across her hazel eyes. Emily. That was her name, or had been. She’d once been a healer, that much she knew—but now, lost in the dark weaving spell, she could not remember the events that had brought her here. Something had happened to change her from a girl empowered to heal, to some
thing
altogether different: a mage who practiced evil.

Deep down, in a shadowy place, Emily’s mind and soul were locked away, full of memories she could no longer find, feelings she could no longer touch. The only thing she saw clearly was the malevolent perfection of the web in front of her, waiting to be filled with power. Dark power that belonged to her.

This was not the ancient web spun long ago, designed to spread good magic to many worlds of wondrous creatures. Ravaged by time and not enough magic, that web had withered and collapsed. The perfect prey for the perfect predator.

The web that the dark mage gazed upon was new, woven by a monstrous aberration of spider and human. Unlike the free-flowing strands of the old web, the Spider Witch’s new weaving was cold and unyielding. But it was strong.

“Let them run!”
A sharp voice rang in Emily’s mind.
“Bring the web to life!”

Her unicorn paladin—she used to call him Indi—reared, his crystal horn sparking red. She waved her hand, and the unicorns charged. Fountains of red steamed from hundreds of crystal horns as Emily directed the unicorns along the pathways, weaving the magic with cool, calculating precision. Her ears filled with the drumming of hooves and her vision expanded in a shifting swirl of colors. It was like she was seeing through hundreds of eyes at once. Glorious scarlet swept over the new web like a raging fire as the unicorns ran, doing what they were supposed to do—infusing the web with the ancient magic of Avalon.

“Keep the magic flowing!”
The Spider Witch, far away at her lair in the Fairy Realms, tightened her grip on Emily’s mind.

Emily’s heart stone dimmed. The magic she had taken from Avalon was running out as the unicorns spread it across the web.

Latching onto the thinning strands floating around her, Emily tried to see the magic of Avalon itself.

The sheer power of the aura overwhelmed her senses, catapulting her mind and emotions into a maelstrom of twisting lights. But Avalon’s aura slipped through her fingers, no more solid than fading memories. Again she tried, struggling with all her will to see an image, a glimpse.

Suddenly the lights shattered, a brilliant explosion in her mind’s eye. Emily gasped, fighting to control her breathing.

All at once she saw everything clearly: the skyline of a glorious crystal city sparkling under blue skies, towers and spires glittering in the golden sun. She felt herself fly over meadows of green where magnificent animals ran free. Griffins, unicorns, dragons, mistwolves, cats, and creatures she had never seen, their dazzling auras dancing before her eyes.

But something was wrong; the aura felt empty.

Her vision zoomed into the center of the city, to a round, stone-rimmed well. Though it was inconspicuous amidst the gleaming towers, it was unmistakable.

The happy images faded like ghosts, leaving only the solitary well.

Something had happened here. Something that had changed Avalon forever.

Abruptly the vision went black and she was jarred back to the web. She reeled, her head swimming, her body numb. Her shaking fingers clawed frantically at the air, but the magic was gone. Only a fraction of Avalon’s magic had been set free before the Dark Sorceress had shut the gates, cutting off the flow.

All across the web, the unicorns came to a halt, stomping and snorting in confusion.

Portals flashed around Emily as the unicorns returned. Red magic sparked along their horns and hooves, then flickered out like spent candles.

“We need magic,”
the unicorn Lorelei said as the others crowded close.

But there was no more magic. Emily’s connection to Avalon had been severed. She had to find more or the new web would be empty, like a pipeline without fuel.

Images of animals flashed through her mind, creatures that depended on magic, who were counting on her to save them. Once upon a time they had given their magic to her freely, trusting in the goodness of the healer. But this time they recoiled from her touch, terrified of the dark mage.

Emily lashed out, reaching for the magic of the animals—and found something else.

Something on the web, dark and ferocious, had followed the unicorns—and it was coming for them.

Her gaze moved to the horizon. A black cloud roiled toward them like an advancing storm, devouring the light of the glowing strands. Monstrous shapes flickered in and out like smoke.

Fear rushed through her.

The unicorns shuddered, the younger ones whimpering and mewling.

“
Help us!”
the unicorns cried, terrified of what streaked across the strands—shadow creatures.

In a swarm of beating wings, flashing red eyes, and terrible shrieking, the shadow army of the Dark Sorceress attacked.

Two unicorns went down, nightmarish creatures attached to them like leeches, ripping their magic to shreds. Emily whirled her paladin around as more unicorns fell, their magic vaporized into bursts of red and black. Dozens of gruesome creatures started to feed on the thrashing bodies. The unicorns could only scream, powerless to fight the monsters.

Anger rushed through the dark mage. All the magic she had spread onto the new web was being consumed by the sorceress’s creatures. That magic was hers. She had sacrificed everything for the dark power of Avalon.

Jewel raised, she fired. Streaks of red lightning struck the creatures but their shadowy bodies only absorbed her magic, becoming stronger.

Sensing a new source of food, the monsters swarmed. They were all over her, sharp claws ripping at her magic. Shreds of her aura were sucked into gaping maws. Indi tried in vain to throw them off as the dark circle tightened. Emily and the unicorns were helpless, no match for these hideous creatures.

This was going to be a massacre.

Suddenly howls echoed across the web, reaching a deafening crescendo that seemed to come from everywhere at once. Out of thin air, hundreds of mistwolves leaped into the fray, attacking the shadow creatures in a frenzy of snapping jaws. Soaring above the mistwolves, a red dragon careened from the skies, a girl in black riding upon his back. The warrior leaped from the saddle, somersaulting through the air, silver fire blazing from both fists. She landed beside her packmates, wolf fire slashing through clouds of red and black. Dreamer shifted in and out of mist, tearing into a mob of ghastly creatures.

In a blast of silver, the attackers were thrown back—a great silver wolf had joined her packmates. Stormbringer roared in fury, leaping into the next wave of monsters. Acknowledging her paladin, Adriane took command.

“Moonshadow!” the warrior ordered. “Keep the pack in mist form, it’s the only way to fight them!”

Instantly, the pack dissolved into shimmering mist. Blurs of shadow and light collided as the protectors of magic drove the creatures away from the unicorns.

At Adriane’s signal, Dreamer sprang over the unicorn herd, covering them in a cloud. Emily and the unicorns vanished.

The horde of shadow creatures wailed, searching for their victims.

Amid the chaos, a fiery stallion reared, sending licks of flame skyward. Kara leaned forward, head against Starfire’s neck as they charged into battle. Soaring above her, a fierce flying leopard slashed at hideous shadow monsters.

Like moths to flame, the monsters could not resist the magic of the blazing star. They swarmed as diamond white flamed through the shadows. The blazing star gasped as the hungry eyes and snapping jaws of a vicious shadow creature obscured her vision. She had seen this creature before. The gargoyle-like monster remembered her too, hungry for the magic of her unicorn jewel.

He wouldn’t get it, though, not this time.

The monster disintegrated to a pile of smoldering ash under the fiery hoof of Kara’s paladin.

Warrior and blazing star pushed forward in blasts of silver and white light, clearing a path to Emily.

“Emily!” the warrior shouted. “We have to get the unicorns out of here!”

Surrounded by protective silver mist, the dark mage gave no sign that she heard the girl who was once her friend. The need for more magic burned inside her like a fever, consuming every thought.

The shadow creatures continued to pull and rip at the cloak of mistwolf magic.

“We can’t hold them off!” Kara yelled, her blue eyes wide with terror as she looked toward the horizon.

Another black wave rolled toward them. Bigger shadow creatures were coming.

The dark mage’s eyes, cold and vacant, stared at the others. “The web needs magic.”

“Emily, we have to get the unicorns out of here while there’s still time!” Adriane cried.

“Send them to Ravenswood!” the blazing star ordered as Starfire snorted licks of flame. “They’ll be safe there.”

A flash brightened the dark mage’s eyes. “Yes,” she agreed. “We must go to Ravenswood.”

She raised her wrist and the unicorns all turned to her, horns glowing.

Bright flashes electrified the web as hundreds of portals burst open. The mages and their friends vanished, leaving the web to the marauding army of shadow monsters.