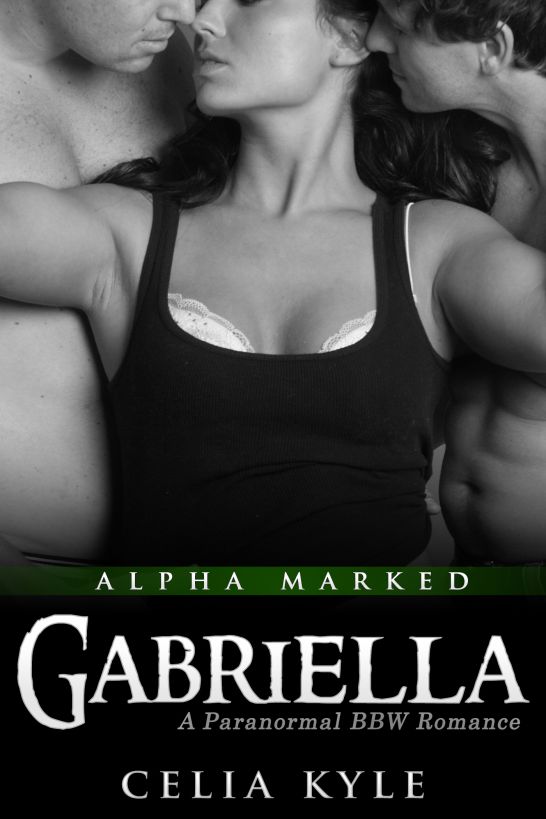 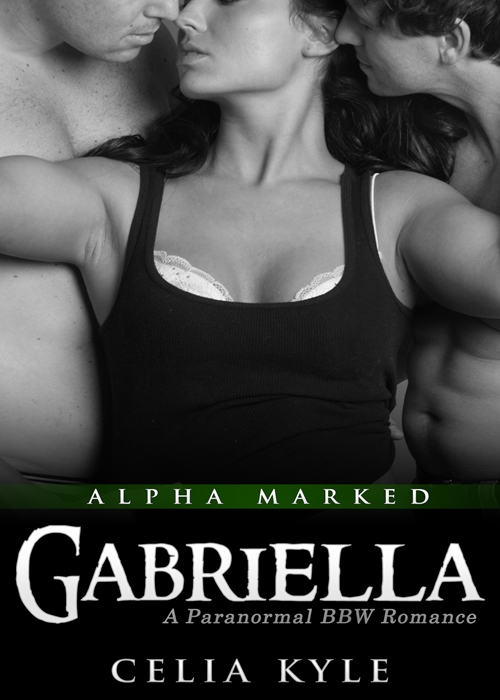 Published by Summerhouse Publishing. Alpha
Marked, Book II: Gabriella. Copyright © 2013 Celia Kyle. ALL RIGHTS
RESERVED. This book contains material protected under International
and Federal Copyright Laws and Treaties. Any unauthorized reprint
or use of this material is prohibited. No part of this book may be
reproduced or transmitted in any form or by any means, electronic
or mechanical, including photocopying, recording, or by any
information storage and retrieval system without express written
permission from the author.

This is a work of fiction. The characters,
incidents and dialogues in this book are of the author’s
imagination and are not to be construed as real. Any resemblance to
actual events or persons, living or dead, is completely
coincidental.

This eBook is licensed for your personal
enjoyment only. This eBook may not be re-sold or given away to
other people. If you would like to share this book with another
person, please purchase an additional copy for each recipient. If
you’re reading this book and did not purchase it, or it was not
purchased for your use only, then please return to Smashwords.com
and purchase your own copy. Thank you for respecting the hard work
of this author.

Talk about an awesome souvenir. The organizer
for the annual werewolf Gathering had purchased the best pens
ever
. Gabriella found them sitting in a pile on the
registration desk, and she’d snared one before the morning’s round
of speed sniffing began.

It had the perfect balance for her to spin it
around her fingers.

There was a brief pause and then she reversed
the pen’s path.

Okay, officially? She was engaging in various
Tests of Proximity, not speed sniffing. Her sister Scarlet had
called it werewolf speed dating.

So now she had to sit at a table opposite two
chairs while Alpha Pairs made their way around the room. Then
they’d sit, sniff, and go.

See? It boiled down to werewolf speed
dating.

Well, they weren’t only sniffing. There was
this whole Mark thing going on, too.

Gabby sighed, hand automatically going to her
left bicep. Stupid Mark. She’d been born with the thing. In a
swirling triangular shape, the Mark was slightly darker than her
overall hue and rose from her skin as if it were a scar. Present
since birth, it signified her eventual mating to two—count ’em
two
—werewolves.

Which left her lounging around enduring the
Test of Proximity with pair after pair while the one wolf who’d
caught her eye lurked outside the ballroom. A glance toward the
doors revealed that the man still skulked, moving like the
predatory animal that prowled just beneath his skin.

Too bad she couldn’t mate a single wolf.
Nope, individual wolves, those that weren’t Alphas and part of an
Alpha Pair, mated other wolves and never humans. Only pairs ended
up with a human Marked as their mate.

Except…except her Mark had reacted to the
Captain’s presence. It’d heated and throbbed and screamed at her to
rush into the wolf’s arms. Supposedly that only happened when a
Marked was around the ones meant for her.

Funny how the guy she reacted to wasn’t part
of a pair. He seemed dominant enough. But he was the Captain of her
newly mated sister’s guards, which meant he was definitively not
paired up and ruling a Pack.

Geez, her sister now had
guards
. Gah.
Scarlet had not only mated the previous night—their first night at
the Gathering—but she’d snared the North American Ruling Alphas:
Keller Aaron and Madden Harris. Which left Scarlet out of the
morning’s activities and Gabriella all alone.

Low chimes filled the air and then the shift
of bodies relocating replaced the gentle sounds. Oh, look, time for
the Alpha Pairs to move on to the next “lucky” (she almost snorted)
lady.

Gabby sighed as she saw her next two
potential mates approach.

They weren’t bad looking, like, at all. It
seemed shifters didn’t come in ugly. Nope, they were all tall,
muscular and gorgeous. While she, Gabriella Wickham, was short,
plump and rather ordinary. Good thing a big part of mating was
based on her Mark’s reaction and not the men’s attraction to
her.

She sighed and was thankful her sisters
couldn’t read her thoughts. They’d spent her entire life bitching
at her about her Debbie Downer attitude when it came to men. They
kept trying to convince her that men could love her just the way
she was, big butt and all.

The two newcomers slid into the seats across
from her, all predatory smiles and leers. God, were wolves this
hard up that they were looking at her with sex on the brain?

Pasting on a purely fake smile, she held out
her hand. “Hi, I’m Gabriella Wickham. My friends call me
Gabby.”

Knowing what was coming, she kept her
expression frozen in place. The first guy didn’t even bother to
introduce himself. Nope, he gently gripped her hand and brought it
to his lips. Actually, his nose. The first time it’d happened she’d
nearly swooned at the seductive gesture. She’d thought the wolf was
going to brush a kiss across her knuckles like some gallant man of
old. As if. The guys were really taking a good whiff to see if she
belonged to them.

He turned her hand over and slid his nose
along her inner-wrist, sending chilly air rushing over her skin.
The seductive light in his eyes instantly dimmed.

Yeah, she could have told him she didn’t
belong to them. The Mark on her bicep wasn’t doing jack shit. No
pulse-y ache, no heat, no throbbing of her pussy that said “Ooh,
take me now!” None of it.

But the guy didn’t seem eager to brush her
aside. Still silent, he handed her off to his other half, and that
man cradled her hand within his, bringing it to his nose to give
her the same treatment. The hint of desire in this other man’s gaze
immediately lowered to casual appreciation.

He released her slowly, and she pulled her
arm back to her side.

“So, you are…” She let her question go
unsaid, but still the Alpha Pair remained quiet, their lips pressed
together until they formed thin, white lines. Now their bodies
vibrated with barely suppressed agitation. So, they wanted to get
on their way now that they knew she wasn’t their mate. “Okay
then.”

Gabby slumped back into her chair and resumed
her pen spinning.

The stupid
ding
hadn’t sounded yet.
Damn it. Movement to her right showed a smiling trio rising from
their seats, hands clasped and moving away from their table. The
two men enfolded the woman in a hug, hands roaming as they embraced
her. A glance around the room revealed that all eyes were on the
trio, looks of fierce longing on every male’s features.

Gabby huffed out a breath, suddenly reminded
of the wolves’ nature. The Alpha Pairs could lead happily without
their Marked, but couldn’t rule indefinitely unless they had a
woman to offset their violent tendencies. She would calm and soothe
their beasts so that life in a Pack became a lot less bloody.

That was part of the reason for the rules
that every Marked had to abide by. They all had to agree to
entertain requests for Tests of Proximity to see if they were meant
for an Alpha Pair. Another rule was that, if a Marked hadn’t found
her mates by her thirtieth birthday, she was forced to attend the
Gathering. Hey, guess who’d turned thirty, like, a week ago? Ding!
The Wickham triplets!

The law regarding the Gathering was one thing
they’d all forgotten about along the way. Well, it was actually
just she and Scarlet since they were the only two that’d been born
with a Mark. But somehow Whitney had gotten an un-declinable
invitation. Which was something Gabby and Scarlet still needed to
investigate somewhere in between rounds of Gabby’s
sniff-me-baby-one-more-time at the Tests of Proximity and Scarlet’s
sessions of gimme-gimme-more with her Ruling Alpha mates.

More action drew her gaze to another table:
another trio rising and moving from the room, a woman grinning
between two wolves.

Dude. When was she gonna get that? Sure, she
put up a kick ass front about not wanting a ménage mating. But the
more she saw Scarlet’s happiness and the shining smiles in the
grand ballroom, the more she craved finding her own two guys.

They’d want her, and her alone, unable to
cheat because wolves mated for life, and would (hopefully) be
patient when it came to sex since she (apparently) sucked at it.
How many men had called her frigid by now? Gabby rolled through the
list in her mind.
The last was Allen. Charlie before him. Zeke?
Or was it Xavier? Gah, they sounded alike.

The low
ding
came again, sending the
Alpha Pairs into action. As one, the remaining sets rose and moved
on to the next table. Her empty chairs suddenly filled with another
couple of strangers.

Without a word or hesitation, she stuck out
her arm, wrist bared, and waited for them to take a sniff.

It was going to be a very long, agonizing
day.

It was going to be a very long, blood-coated
day.

Berke Davis paced outside the hotel’s grand
ballroom, taking a moment to peer inside with each pass. She was
there, right
there
, every time he looked inside. And
surrounded by Alpha Pairs.

Berke had to take comfort in the fact that
she was destined to belong to him—him and Jack—whether the other
wolf liked it or not.

He ached to go to her, to march into the room
and yank her away from those wolves. Somewhere deep inside, he knew
that the luscious Gabriella Wickham belonged to him and him alone.
Well, not alone. There was Jack…

Berke shook his head. One thing at a time.
First he needed to get Gabriella away from those unmated wolves.
Another Alpha gripped Gabriella’s wrist and brought it to his
nose.

That was it. That wolf would die. Slowly.
Painfully. No one touched what belonged to him and—

“Captain?” A female voice interrupted his
thoughts, the single word oozing sex and a promise.

He squeezed his eyes shut and sighed.
Sometimes he hated his duty. Hated the fact that, because he was
the Ruling Alpha’s Captain of the Guard, he had to play nice with
the attending staff and their families. Sliding his features into
an expressionless mask, he turned toward the owner of the
sexualized purring voice. “Hannah.”

The female wolf closed the distance between
them, seduction in each sway of her hips. Once upon a time, he’d
have found her blatant invitation intriguing. Hell, he would have
taken her up on it and enjoyed their time together. But now he’d
found Gabriella and was determined to claim her. There were still
hurdles to overcome, but there was no doubt in his mind that the
curvaceous Marked was his.

A delicate hand stroked his chest, the
red-painted nails scraping against the numerous medals that adorned
his uniform. “I haven’t seen you lately.” She paused and eased
closer. “Berke.” His name rolled off her tongue in an unjustified
familiarity.

He gritted his teeth and bit back his snarl.
His wolf growled within his mind, warning him to cease the female’s
touch before the beast pushed its way out and did it for him.
Grasping her wrist, he removed her hand from his chest and took a
step back before releasing her.