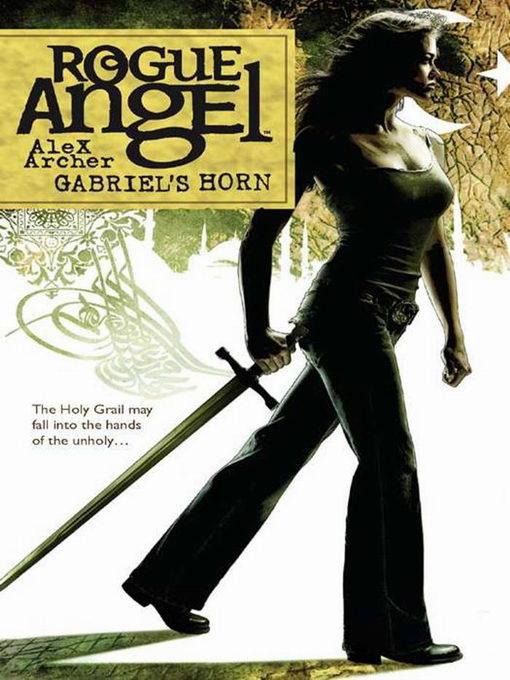 The broadsword, plain and unadorned, gleamed in the firelight. He put the tip against the ground and his foot at the center of the blade.

The broadsword shattered, fragments falling into the mud. The crowd surged forward, peasant and soldier, and snatched the shards from the trampled mud. The commander tossed the hilt deep into the crowd.

Smoke almost obscured Joan, but she continued praying till the end, until finally the flames climbed her body and she sagged against the restraints.

Joan of Arc died that fateful day in France, but her legend and sword are reborn…

The stranger could be insane. Or he just might be our salvation.

Archaeologist Annja Creed is more than curious when a decrepit, ancient-looking man visits her, claiming the end of the world is near. The stranger spins wild tales and speaks as if he actually knew King Arthur. But, strangest of all, he insists that Annja is the only one who can stop the horrible event that is about to happen.

When Annja's mentor and friend Roux goes missing, she quickly realizes there may be something to the stranger's stories. Making her way through the dark and violent underbelly of Istanbul, Annja must find her missing friend and the Holy Grail before the relic gets into the wrong hands. She may not fully believe the fate of the world is on the line, but she doesn't really want to die finding out.

to Mel Odom for his

contribution to this work.

The sensation of being watched was uncomfortable

Annja had experienced such things before. Women generally did. Usually it was better to just ignore things like that, but Annja was aware that she no longer lived in a
usually
world.

A figure stood at the window, and he was staring at her. Gaunt and dressed in rags, the old man looked more like a scarecrow than a human being. A ragged beard clung to his pointed chin. His hat had flaps that covered his ears and gave his face a pinched look. His eyes were beady and sharp, mired in pits of wrinkles and prominent bone.

He lifted a hand covered in a glove with the fingers cut off. His dirty forefinger pointed directly at Annja, and even from across the room, she read his lips.

A chill ghosted through her. How did the man know her name?

“Annja Creed,” the old man said. “The world is going to end. Soon.”

Titles in this series:

Secret of the Slaves

“He’s going to catch fire when the motorcycle hits the back of the overturned car?” Annja Creed asked in disbelief.

“Yeah. But the real trick is
when
he catches fire.” Barney Yellowtail calmly surveyed the wrecked cars in the middle of the narrow street between a line of four-story buildings that had seen far better days.

“When?” Annja asked, still trying to grasp the whole idea.

“When is important,” Barney continued. He was in his late forties, twenty years older than Annja, and had been a stuntman for almost thirty years. “If Roy catches on fire too late, we’ve hosed the gag.”

Gags, Annja had learned, were what stunt people called the death-defying feats they did almost on a daily basis.

“And if you hose the gag,” Annja said, “you have to do it over and risk Roy’s life again.”

Barney grinned. He claimed to be full-blood Choctaw Indian from Oklahoma and looked it. His face was dark and seamed, creased by a couple of scars under his left eye and under his right jawline. He wore rimless glasses that darkened in the bright sunlight, and a straw cowboy hat. His jeans and chambray work shirt were carefully pressed. His boots were hand-tooled brown-and-white leather that Annja thought were to die for.

Annja was five feet ten inches tall with chestnut hair and amber-green eyes. She had an athlete’s build with smooth, rounded muscle. She wore khaki pants, hiking boots, a lightweight white cotton tank under a robin’s-egg-blue blouse, wraparound blue sunglasses and an Australian Colly hat that she’d developed a fondness for to block the sun.

“That’s not the worst part,” Barney assured her.

“Naw,” Barney replied, smiling wide enough to show a row of perfect teeth. “The worst part is that the director will be mad.”

Barney looked at her as if sensing that she wasn’t completely convinced. “Mad directors mean slow checks. They also mean slow work. If you can’t hit your marks on a gag, especially on a film that Spielberg’s underwriting, your phone isn’t going to ring very often.”

Annja wondered if you had to be certifiable to be a stuntman.

“C’mon, Annja,” Barney said. “I’ve read about you in the magazines, seen you on Letterman and kept up with what you’re doing on
Chasing History’s Monsters.
You know life isn’t worth living without a little risk.”

Annja knew her life hadn’t exactly been risk free. Actually, especially lately, it seemed to go the other way. As a working archaeologist, she’d traveled to a number of dangerous places, and those places were starting to multiply dramatically as she became more recognized.

She thought about her job at
Chasing History’s Monsters.
Most days she wasn’t sure if it was a blessing or a curse. The syndicated show had high enough ratings that the producers could send Annja a number of places that she couldn’t have afforded on her own.

The drawback was that the stories she was asked to cover—historical madmen, psychopaths, serial killers and even legendary monsters—were usually less than stellar. Fans of the show couldn’t get enough of her, but some of the people in her field of archaeology had grown somewhat leery.

None of that, though, had come without risk.

“Okay,” Annja admitted. “I’ll give you that. But I’ve never set myself on fire.”

“Roy’s not going to set himself on fire,” Barney said. “I’m going to do that for him.”

“It’s just that timing is critical.” Barney stepped to one side as his cell phone rang. “Excuse me.”

Annja nodded and surveyed the street. The film crew had barricaded three city blocks in Prague’s Old Town. A few streets over, the Vltava River coursed slowly by and carried the river traffic to various destinations.

Prague was a new experience for Annja, and she was thoroughly enjoying it. Getting the job on the movie had been as unexpected as it was welcome. She’d done a bit of work with props before, but never on a motion picture of this magnitude.

Kill Me Deadly
was a new spy romp that was part James Bond and part Jason Bourne. The hero even carried the same J.B. initials—Jet Bard.

Annja hadn’t quite understood the plot because a lot of the details were still under wraps. She was of the impression some of them were still being worked out, which was causing extra stress on the set.

Three cars occupied the middle of the street. Two of them were overturned. All of them were black from where they’d been burned. The stuntman was supposed to hit the upright car, catch on fire and turn into a human comet streaking across the sky.

When Annja had heard about the stunt and had received an invitation from Barney to attend, she’d thought about gracefully declining. Then she’d found she couldn’t stay away.

Now her stomach knotted in anticipation. She’d gotten to know the young daredevil who was about to become a human fireball. He was a nice guy and she didn’t like the idea that something bad might happen to him.

“Okay,” Barney said as he stepped back to rejoin her. His gaze remained on the street while he adjusted his headset. “I’m going to need you to stay quiet for a moment, Annja.”

“Sure.” Annja gazed down the street anxiously.

Camera operators lined the street from various points of view. All of them remained out of each other’s line of sight. The crews had worked on the setup for hours. Before that, they’d measured and mapped the distances on a model of the street and the cars.

According to the computer programs Barney and the other stunt people had run, everything would go fine. To Annja, it was a lot like exploring a dig site she’d read about. Even though she knew the background and the general layout, there were far too many surprises involved to guarantee everything was safe. Some of the early Egyptian-tomb explorers had quickly discovered that.

“On your go,” Barney said softly. He held up an electronic control box in both hands. “I’m with you.” He flicked a switch.

Immediately a half-dozen fires flamed to life within the pile of wrecked cars. They burned cheerily and black smoke twisted on the breeze.

“We’ve got fire in the hole, Roy,” Barney declared.

The throb of the motorcycle’s engine rumbled into Annja’s ears. She watched with a mixture of dread and anticipation. Roy Fein was one of the top stuntmen in the game. Barney had said that a number of times over the past few days. She didn’t know if he’d been trying to reassure her or himself.

The exact speed had been a big concern, Annja knew. Too much and the impact angle would be wrong and the motorcycle might flip end over end. Too little and Roy would fall short of the air bag that waited at the other end of the jump.

The motorcycle roared into view. Roy Fein, dressed in dark blue racing leathers and a matching helmet, had raced around the corner. A car followed only inches behind him.

“You’re on,” Barney said. “Hit the Volkswagen and I’m going to light you up.”

At that moment, the pursuit car slowed and slewed sideways. Actors inside the vehicle leaned out the windows and fired weapons.

“I got you, kid. I got you.” Barney’s voice was soft and reassuring. “Get that fire-suppression unit ready.”

The motorcycle rider popped a slight wheelie just before he hit the Volkswagen. Effortlessly, the motorcycle climbed the specially altered vehicle.

“Now,” Barney said. His finger flipped one of the switches on the electronics box.

“Kick loose, kid!” Barney yelled. “Lose the bike!” He dropped the electronics box and ran toward the street.

Roy pushed free of the motorcycle and spread-eagled in the air like Superman. But he wasn’t flying—he was falling. Flames twisted and whipped around his body. He threw his arms out and tried to adjust his fall as gravity took over and brought him back toward the pavement.

Annja ran after Barney, though she didn’t know what she was going to do. There was no way she could help Roy. But she couldn’t just stand there, either.

The motorcycle spun crazily, nowhere near the trajectory it was supposed to maintain to get near the air bag designed to break Roy’s fall. Then it blew up.

The force slammed Annja to the ground. She tucked into a roll and came to her feet instinctively. Slightly disoriented, she glanced up to see where the flaming pieces of the motorcycle were coming down. She saw Barney was on his side. His face was twisted in agony as he reached toward a bloody gash soaking his shirt.

Annja went toward him. She yelled for help, but couldn’t hear her own voice. She tried again. Her ears felt numb, then she realized she was deaf.

She dropped beside Barney and surveyed the wound. An irregular furrow ran along his ribs. She tried to tell him that he was going to be all right but knew that he couldn’t hear her, either. She yanked his shirt from his pants and rolled the tails up to his wound, then leaned on the folds to put pressure on the wound in his side.