Robert E. Lee came home. He had not seen Arlington or his family for two years. He hugged Mary and the children. But he could not find his youngest son Robert. “Where is my little boy?” he asked. A boy stood near by. Lee picked him up and kissed him. Everyone laughed. Lee had kissed his son’s best friend.

The family was glad Lee was back. He high-jumped with the older boys. He had the littlest children tickle his feet while he told them stories. Sometimes the stories were so good the children forgot to tickle. “No tickling, no story,” Lee would say.

The Army was pleased with Lee’s work. They made him a colonel. They asked him to be head of West Point.

West Point was in New York, in the North. But the Lees felt at home there. Many of Colonel Lee’s Army friends were from the North. Cadets from North and South were friends.

But there was bad feeling growing between North and South. The biggest reason for this was slavery.

Most people knew that slavery was wrong. In the North it was against the law. But in the South it was allowed. People with big farms said they needed slaves to do the work.

Lee knew that slavery was wrong. He said it was bad for the slave and worse for the man who owned him. He freed the few slaves his family had given him. When some said they wanted to go to Africa, he sent them.

Lee did not tell other people to free their slaves. And he thought the North had no right to tell the South what to do about slavery.

Lee did not like to argue about slavery. He thought it made the trouble worse. He did not see how deeply people felt.

In a few years Colonel Lee’s job at West Point was over. The family was glad to get back to Virginia. But Lee had to leave often. He came home when he could. Old Mr. Custis had died. Now Lee had to run Arlington.

One fall day in 1859, a soldier came to Arlington. He carried a message for Colonel Lee.

Fighting had broken out in a town called Harpers Ferry in Virginia. Strangers with guns had come to free the slaves. Lee was told to bring Harpers Ferry to order. 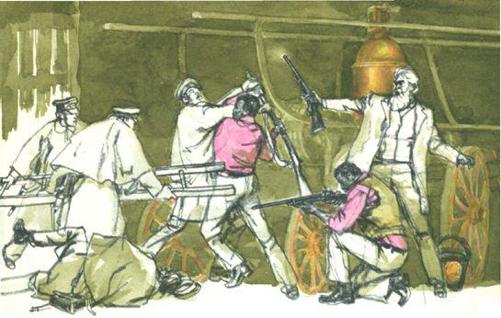 A great crowd had come to the fire-house. The men who had tried to free the slaves were hiding inside.

Colonel Lee sent a message in. He said soldiers were all around the building. He told the men to give up.

The men would not come out. They moved fire engines across the door.

The soldiers smashed in the door with a ladder. There were gunshots. A soldier fell. The rest ran in. Inside they found a band of men led by a strange, wild man.

This brave, angry man was John Brown. He hated slavery. Many in the North thought he was right in fighting to free the slaves. But in the South people hated him. Robert E. Lee believed he was a madman. 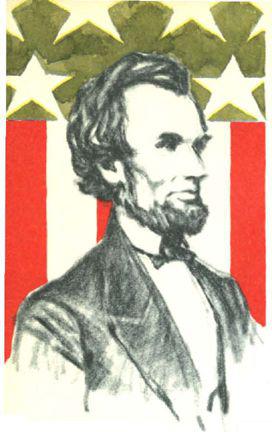 On November 6, 1860, Americans elected a new President. He was a tall, thin man who had often spoken against slavery. His name was Abraham Lincoln.

People in the South were very unhappy. They did not want Lincoln for their President. Some Southern states said they did not want to be part of the United States any more. They voted to leave the Union. They joined to make a new country, the Confederate States of America. They chose their own president.
He was Jefferson Davis. 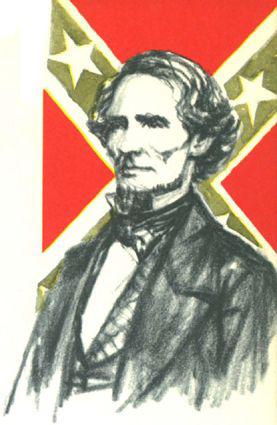 The Confederates knew Lincoln might fight to keep the country together. They asked Lee to be a general in their army. Lee said no. He thought states had no right to leave the Union. He hoped Virginia would not do it. “If Virginia stands by the Union, so will I,” he said.

In the South, Confederates began taking over United States forts.

Lincoln said the South had to stay in the Union. He said the forts must be given back. But in April, 1861, Confederates fired on Fort Sumter in South Carolina. War had begun.

It was a hard time for Robert E. Lee. President Lincoln wanted him to lead the Union Army. Again, Lee said no. Virginia might join the Confederacy. Lee could never lead an army against his own state. He loved the United States. But he felt his first duty was to Virginia. He could not forget his father’s words, “Virginia is my country.”

Lee left the United States Army. He said he would not fight again unless Virginia needed him.

On April 17 Virginia joined the Confederacy. Lee was asked to lead Virginia’s army. He could not say no.

He went to Richmond, the capital of Virginia. The city was crowded.
Men from all over the state had come to join the army. They were sure the South would win. They said the war would be short and glorious.

Lee did not think so. The North had more guns and men. Lincoln would fight hard to save the Union.

Lee had to get his men ready. He had to dig defenses. Digging was not glorious. People said he was afraid. They called him “Granny Lee.”

Robert E. Lee was still there when the first battle of the American Civil War was fought.

Into Virginia marched 30,000 Union soldiers. They attacked an army of 20,000 Confederates. The two armies fought by a stream called Bull Run.

Fighting was fierce. But the Union army was winning. Then 9,000 more Confederates arrived. Most ran into battle. But General Thomas Jackson led his men to the top of a hill.

“Steady Men!” Jackson cried. “Hold your fire until they’re on you. And when you charge, yell like furies.” The Union soldiers attacked again. Confederate soldiers fell back. On came the Union men, their flags and guns shining in the sun.

Then down the hill came Jackson’s men, screaming the strange “Rebel yell.” Union soldiers were terrified. They threw down their guns and ran.

The Confederacy had won the first battle! Jackson was a hero! Soldiers said he had stood “like a stone wall.” They called him Stonewall Jackson. For now, General Lee was forgotten. 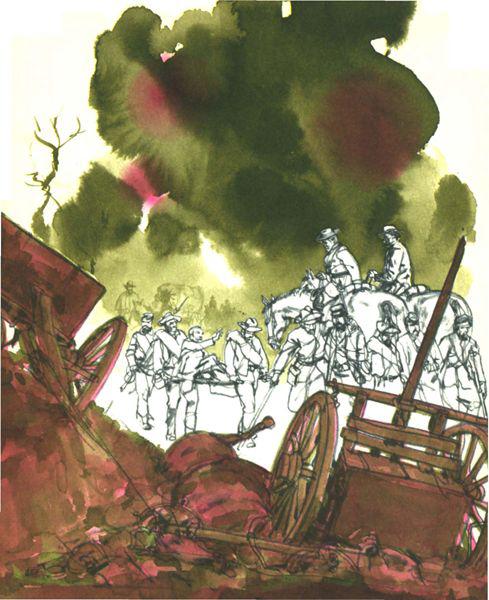 8
The Army of Northern Virginia

Robert E. Lee and Jefferson Davis rode toward the sound of the battle. Bull Run had been a great victory for the South. But since then things had gone badly. Confederate armies had lost many battles in the West. And now a Union army was just a few miles from Richmond.

For a year Lee had been helping Davis plan the war. This was the first battle he had seen.

The road was filled with wounded soldiers leaving the battle. Just then a wounded man was carried by. It was the Confederate general.

On the way back to Richmond, Jefferson Davis turned to Robert E. Lee. He asked him to lead the army.

In June, 1862, General Lee became the leader of the Confederate Army of Northern Virginia.

The men in Lee’s army were from all over the South. Some were rich men who brought their own guns and horses. Most were poor farm boys.

Lee tried to get to know his men.
He often went among them. The men looked forward to seeing their tall, handsome leader ride by on his great gray horse, Traveler. Lee made his men work hard. But he was always fair with them. And the men came to love him.

Lee’s army was much smaller than the Union army. He knew it would be hard to push the Union army away from Richmond. But he had a plan.

Most of the time Confederate armies had waited for Union armies to attack. This time Lee was going to attack first.

Stonewall Jackson and his men arrived. “That fire is very heavy,” said Lee. “Do you think your men can stand it?”

Alicia ANOTADA by Lewis Carroll & Martin Gardner
Cheryl Reavis by The Bartered Bride
Eve: In the Beginning by H. B. Moore, Heather B. Moore
03 Before The Devil Knows You're Dead-Speak Of The Devil by Eimer, Patricia
Drat! You Copycat! by Nancy Krulik
Born to Please [Pleasure Vessels 1] (Siren Publishing Everlasting Classic ManLove) by Jana Downs
Candleburn by Jack Hayes
Blow Out by M. G. Higgins
The Whisper Box by Olivieri, Roger
Backstage (The Barter System Book 4) by McClendon, Shayne