“They can stand almost anything,” said Jackson. Into battle they went.

Still the Confederates could not push the Union men back. Lee turned to General John B. Hood. He asked him to lead a charge.

Ahead of Hood’s men was a hill. There, three lines of Union riflemen waited. On top of the hill were Union cannons. Hood charged. The rifles cracked. The cannons roared. Many of Hood’s men fell. But the rest kept coming. They did not yell. They did not fire. They just ran.

The Union army had been pushed back. Lee had won his first battle.

Lee drove the Union army away from Richmond. Now he had to push it out of Virginia.

Lee’s soldiers wore rags. Some had no guns or shoes. They needed food. Union armies had guns and food. But still Lee won battle after battle.

Lee’s “scarecrow army” fought bravely. And their general planned battles well. In the South he was a hero. Even in the North people said he was the best general in the war. 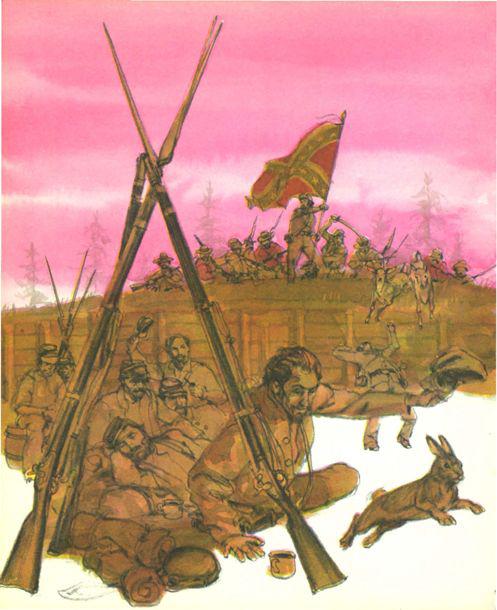 Union soldiers were talking and playing cards. The sun was going down. The soldiers were sure Lee and Jackson would not attack today.

The dinner call came. Soldiers put away their guns and went to eat.

Just then deer jumped out of the woods and ran by. Rabbits hopped out after them. The men laughed and cheered.

Suddenly rifle shots came from the woods. The cheering stopped.

Out of the forest rushed Stonewall Jackson’s men, yelling as they came.

The Union soldiers ran in terror.

To the east, Stonewall heard the sound of firing. Lee was attacking the other side of the Union army. Lee’s battle plan was working well.

The moon rose. Jackson wanted to see if the time was right for another attack. He and a few men rode ahead. They saw that the Union men were still running. They turned back toward the Confederate army.

Suddenly there were shots. The Confederates were firing at them! They thought Jackson’s men were Union soldiers. Jackson was hit!

The next day General Lee rode through the battlefield. When his soldiers saw him, they began to cheer. The cheering grew and grew.
It had been General Lee’s greatest battle. The Union army was twice as big as his. But he and Stonewall had beaten it. It should have been a great day for Lee. But he was very sad. Many brave men had died. And in a little house a few miles away, his best general lay badly wounded.

At first Jackson seemed to get better. But this did not last. One afternoon, in a fever, he began to call out orders to his men. Then he stopped and smiled. “Let us cross over the river,” he said, “and rest under the shade of the trees.” And then he died.

The death of Stonewall Jackson was a terrible loss to General Lee. 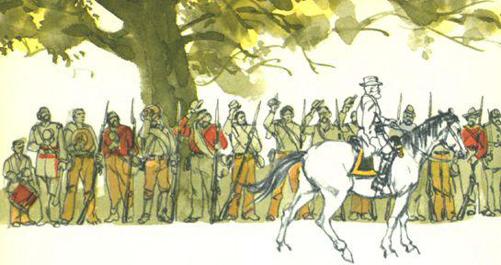 General Lee decided to fight in the North. He led his men into Pennsylvania. They met a Union army near the town of Gettysburg.

This was not where Lee wanted to fight. It was not a battle he had planned. But he knew that if he won here, he might win the war.

After two days of fighting, Lee decided it was time for a great attack. He rode out to see his men. This time they could not cheer him. That would show the Union army where they were. But as he passed, they quietly took off their hats.

The Confederates were hidden behind some trees. In front of them were open fields. Across the fields was a line of hills. There the Union army waited.

Out of the woods the Confederates charged. But this time the Union men did not run. They fired and kept on firing. Thousands of brave Confederates died in that terrible charge. The rest were driven back.

A great cheer went up from the Union lines. They had beaten Lee!

The next day a heavy rain began to fall. Sad and tired, Lee took his army back to Virginia.

Now the North was sure it could win the war. And Lincoln thought he had found the man to do it. This general had beaten the Confederate armies in the West. His name was Ulysses S. Grant.

In May, 1864 Grant was ready.
A huge Union army moved toward Richmond. Lee was waiting. Grant lost 60,000 men in three terrible battles. Lee lost half that many. But Grant did not give up.

Grant marched south. He planned to attack Richmond from the other side. But Lee hurried to stop him.

To reach Richmond, Grant had to get by the town of Petersburg. There Lee met him. Line after line of Union soldiers charged Lee’s army. But Lee held them off. Still Grant did not give up. Lee’s army was in Petersburg, and Grant was not going to let it get away. He was going to keep on attacking until General Lee was beaten for good. 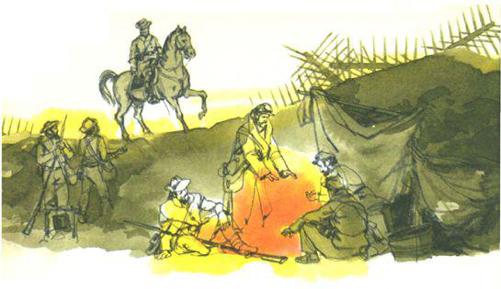 11
The Fall of the Army of Northern Virginia

“General, I have no shoes,” said a soldier. “I haven’t enough to eat,” said another. Lee rode sadly among his men. His brave army had just pushed Grant back again. But the men could not last much longer.

It was the winter of 1865. For months Lee’s army had been under attack in Petersburg. Union cannons had fired without stop. Union men had even dug a tunnel under Lee’s lines and exploded a huge bomb. Still Lee’s men held Grant off.

Grant lost thousands of men. But he could get more. Lee could not.

By now Lee’s army was half as big as Grant’s. And many of his best generals had been killed.

Lee’s men were weak from hunger. Many were barefoot in the snow. Many were sick. Some soldiers could stand no more and ran away. But most of the ragged little army kept on fighting.

The men loved Lee. They would fight as long as he asked them to.

Grant attacked again and again. Lee saw that he could not save Richmond. He had to escape.

General Lee led his men out of Petersburg. He marched them toward a small town by a railroad. From there they could move by train out of Virginia. They would join a Confederate army in North Carolina. Then they could attack Grant again.

But Grant and his men followed Lee out of Petersburg.

Lee had ordered food for the army. But when the soldiers arrived in the town, no food was there.

On April 6 Union soldiers caught up. They attacked. That night only 15,000 men were left in Lee’s army. But still they tramped on. Grant and 80,000 men came after them.

Lee wanted to reach Appomattox Station. Food trains were waiting there. He could feed his army and escape. But by the time the army arrived, Union armies were all around the town. Lee was trapped.

When Virginia had gone to war Lee had agreed to fight. But now he saw that his state would be ruined if the fighting went on. Most of his men would be killed. It was time to give up the fight. He would surrender. 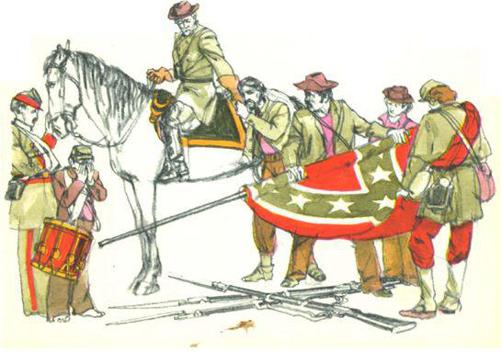 Ulysses S. Grant never looked like a great general. Today his beard was wild. His clothes were muddy from a long ride. He entered the farmhouse.

Inside was a man in a fine uniform. A beautiful sword hung by his side. It was General Robert E. Lee.

The two men shook hands. They sat down and General Grant wrote out the surrender. It was very fair. General Lee signed it.

As General Lee left, Grant and his men raised their hats in salute.

Lee rode back to his army. Sadly he told his men he had given up. The men crowded around Traveler to give their general a last cheer. They reached out to touch his hand. One soldier cried, “I love you just as well as ever, General Lee.” Tears were in Lee’s eyes as he rode away.

Robert E. Lee had led the people of the South through the war. They would still turn to him for help in the hard years that followed. He told them to forget the war. He said they should work to build up their country again.

A Confederate soldier told Lee he wanted to leave America. “Do not leave Virginia,” Lee begged. “Our country needs her young men now.” 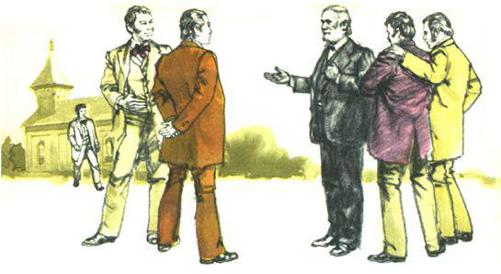 Lords of the Were by Bianca D'arc
Trust in Us by Altonya Washington
A Debt From the Past by Beryl Matthews
The Society of the Crossed Keys by Zweig, Stefan, Anderson, Wes
The Night of the Hunter by Davis Grubb
I See Me by Meghan Ciana Doidge
Mean Business on North Ganson Street by S. Craig Zahler
Socrates: A Man for Our Times by Paul Johnson
9781618850638IfOnlyYouKnewBergman by Unknown
A Zen For Murder (Mooseamuck Island Cozy Mystery Series Book 1) by Leighann Dobbs