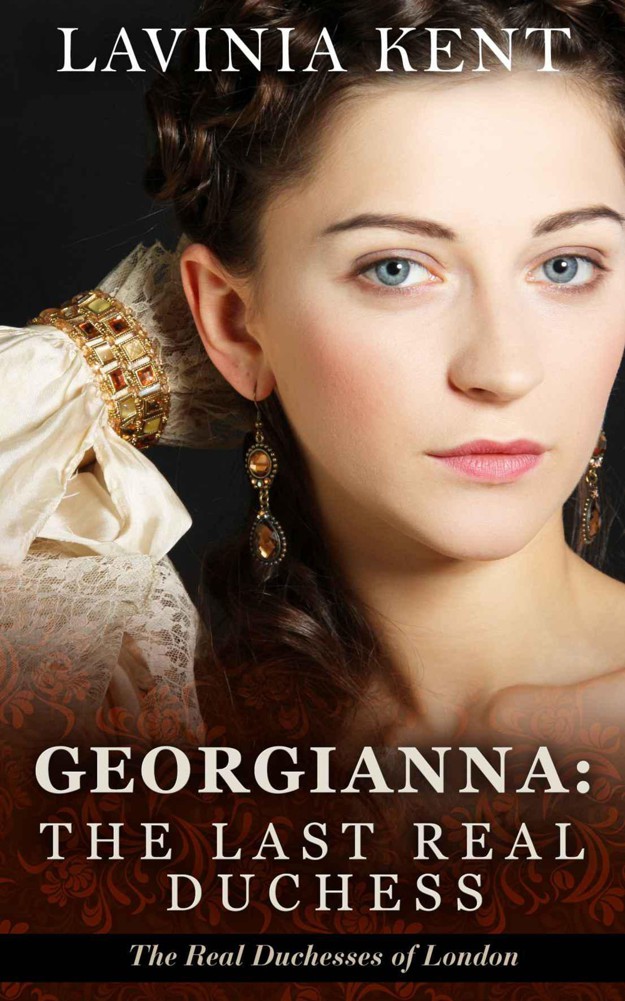 Lavinia Kent returns to her iconic
Real Duchesses of London
series of novellas to tell the story of Georgianna, the last Real Duchess.

When Georgianna’s husband, Lord Richard, unexpectedly becomes a duke, the two are brought together and then torn apart as each tries to find a place in their new lives.  Georgianna had married for love – only to discover her husband’s mistress.

Now the two find themselves sharing residence at the ducal estate.  Are circumstance and passion enough to bring the two together?  Can Richard reveal the love he has barely admitted to himself? Can Georgianna forgive him for all the hurt and lies?

Will one night of passion become a lifetime of love?

The Real Duchess of London

All rights reserved.  Except as permitted under the U.S. Copyright Act of 1976, no part of this publication may be reproduced, distributed, or transmitted in any form or by any means, or stored in a database or retrieval system, without the prior written permission of the author.

The Real Duchesses of London

The Real Duchesses of London*

Kathryn, The Duchess of Harrington

“I am the perfect duchess. I am beautiful, rich, well read, well spoken, and have a civilized relationship with the duke. What more could a woman want?”

Linnette, The Dowager Duchess of Doveshire

“I have no intention of giving up what is mine. I’ve run the house and the estates for years. Why would I ever give them up now? I don’t care who the new duke is.”

Elizabeth, The Countess of Westhampton

“I may not be a duchess, but I am more of a lady than any of them. You’ll never see me in the scandal sheets. Mind you, I am not saying I haven’t ever been scandalous — just that you’ll never know.”

Annabelle, The Marchioness of Tattingstong

“They say that, because I am American, I have no taste, no grace, no style, no refinement. I have every intention of showing them just how wrong they are—and when the time comes, I will be the perfect duchess.”

“My son will be a duke. It doesn’t matter if I get to be a duchess as long as I know my son will inherit from his uncle and will hold the title. My husband may have broken many of his promises to me, but that one is absolute.”

*
All quotes as relayed to Miss Jane White, more or perhaps less accurately, by Miss Mary White, lady’s maid to the Duchess of Harrington

Her grace, Kathryn, Duchess of Harrington, swept into the Duke of Strattington's parlor. "Isabella, we really must do something."

Isabella looked up with a smile, dropping the piece of yarn with which she'd been teasing the fluffy, gray cat that lay at her feet
. "Whatever are you talking about? I thought the fun of being a duchess was that we didn't have to do anything."

"Annie," was all Kathryn replied.

"She does not seem happy."

"No." Isabella twisted her hands in her lap. "She isn't even chattering anymore. I don't know what Lord Richard has done to her, but she seems to grow thinner each day. I was so happy she was in London, but . . ."

"Perhaps she just misses her son
. You know she is unhappy being here while Robert is in the country.” Kathryn tried to sound hopeful, although it was an odd thing to feel hopeful about.

"No, I fear it is more than that
. She has the distinct look of a woman who is unhappy because of a man.” Isabella stood, and paced across the room. "I thought when she held her masquerade that she was working it all out, but something seems to have gone quite wrong."

Kathryn sighed and came to stand beside Isabella
. "I fear you are quite correct. I have summoned Annabelle, Linnette, and even Elizabeth and asked them to meet me here. You may have been Annie's friend first, but we all care about her deeply."

"I know you do – even if you
are the only one who would extend invitations to my house." Isabella grabbed Kathryn's hand. "But what can we do?"

As if hearing their names the other women swept into the chamber in a cloud of silk and lace
.

"What's this about Annie?" Elizabeth asked, her normally haughty features relaxing with worry
. "Is she ill? She has not looked at all well recently."

"I don't think it's
an illness," Linnette added. "Unless you count a man as a sickness. I know we've all had moments when that idea would not have seemed far-fetched."

There was silence for a moment as each of the women considered her own life, her own love
. Yes, men and love and heartbreak definitely could be an illness.

It was Isabella who spoke again
. "I can't say that I know for sure what is happening with her. What I do know is that she says she loved Lord Richard when they married, but that then he betrayed her in someway. I am not quite sure how."

"I've heard rumors," Elizabeth chimed in
. "We all know that she was supposed to marry Hargrove, not his younger brother."

"I hadn't heard that," Annabelle said, speaking for the first time, her blond curls bouncing about
. "It must have been before I came to England."

"It was quite the scandal that never happened." Kathryn glanced at Isabella for permission and then sat upon the settee, patting the seats beside her
. "Everybody thought there'd be a huge fuss when Annie married the younger brother, Lord Richard, but it nothing was ever said – by anyone. For a few months Annie and Lord Richard were seen about Town and then when Annie began to increase she moved to the country and Lord Richard went back and forth – and then he just stopped. He stayed in Town and Annie stayed at the estate. I am not sure he even went home when his son was born."

"That is quite strange.
” Annabelle sat beside Kathryn. "But she's here now?"

"She wanted another child," Isabella said it quietly.

"Oh." It was almost a whisper through out the room, as each lady considered that.

"Well," Elizabeth said
. "That is clearly not working. I think we must persuade her to return to the country and her son. Perhaps some fresh air might put the roses back in her cheeks."

"And perhaps she'll find a handsome groom to take care of the other matter," Linnette spoke with half-smile.

Kathryn shushed her friend. "Sometimes, my dear, I do not believe the things you say."

"I just say what we're all thinking.
” Linnette let her words trail off.

"Oh, I am so glad you are here. I cannot decide what to pack. I know that is silly when I am returning to the country and should probably just bring everything, but when would I ever wear these at Harsgate?" Annie held up a pair of silver evening slippers with rose-colored heels and crystal bows. Her mind filled with the coming years of quite. Her friends were quite correct that she did need to leave London, but it had not been an easy thought. At least Kathryn had come to help her pack.

"Your brother-in-law
– the Duke of Hargrove is dead." Kathryn repeated.

Annie looked about at the row of trunks and the two maids carefully folding her gowns
. When had she acquired so many things? When she'd married, everything she'd owned had fit into two not very large trunks. Now it looked like she was packing for a family of twenty. But as she never intended to return to London perhaps it was good she purchased so much. "Oh, don't take that, Constance," she addressed her maid. "I never liked it. You can take it and sell it. Just please don't keep it for yourself. You would look dreadful in orange.” How was she ever going to finish? She had promised herself she would be gone at first light tomorrow and at this moment it seemed like an insurmountable task.

"Annie, are you listening to me?" Kathryn moved to stand directly in front of her, placing a hand on each of Annie's shoulders and holding her still.

Shaking her head to clear the jumble that filled it, Annie focused on Kathryn's gentle brown eyes. "What? I am sorry. I simply wish to be back home, gone from here and away from all this." She waved about the room, but encompassed all of London. "I don't think I can handle another silent meal sitting across from Richard."

"Oh dear, I suppose he won't be here for dinner. I was so looking forward to saying farewell to him. I've become quite fond of him these last months. He is somehow changed.” And then the words hit, the words that her mind had refused to accept. She sank back on the edge of the bed, her hands knotting in the covers. "Truly? Are you sure? How did it happen?"

"They are saying that he shot himself while cleaning a gun."

"Hargrove cleaning a gun? That can't be true. It must be somebody else.” The very idea was wrong. She wasn't sure the duke had ever cleaned a gun in his life, doubted that he'd have known how to do it – doubted he even knew it had to be done. She'd gone hunting with him once at Harsgate and the groundskeeper had followed along behind handing him a loaded shotgun for each shot he'd taken.

And in London
– Why would Hargrove be cleaning a gun in Town? She couldn't imagine any circumstance that would have led to him discharging a gun.

No, there was some mistake
. Kathryn could not be right.

Kathryn did not argue with the doubt Annie was sure showed on her face, instead she sat beside Annie on the bed
. "No, it is definitely him. Everybody is talking. The stories vary but they all say that he was shot in the chest and died shortly thereafter. I believe he called for Lord Richard and that your husband spent his last minutes at his brother's side."