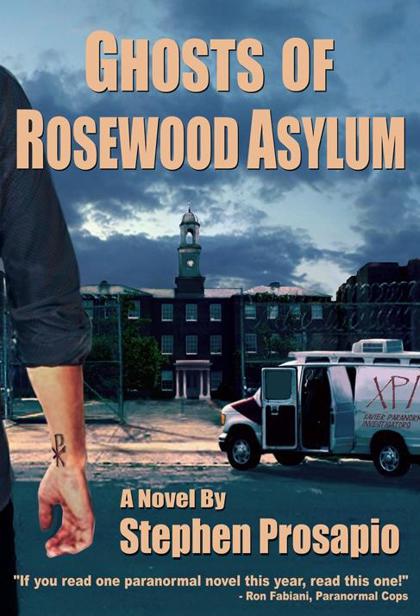 All rights reserved, including
the right to reproduce this book, or portions thereof, in any form without
written permission except for the use of brief quotations embodied in critical
articles and reviews.

Interior
design and typesetting by Lynn Calvert and Stephen Prosapio

This is a
work of fiction. Names, characters, places, and incidents either are the
product of the author’s imagination or are used fictitiously, and any
resemblance to actual persons, living or dead, business establishments, events,
or locales, is entirely coincidental.

In memory of Mark Crisman, whose passing

during the
writing of this novel

“
But if anyone causes one of these little
ones who believe in me to sin, it would be better for him to have a large
millstone hung around his neck and to be drowned in the depths of the sea.”

Amelia Lovecroft continued to pretend that
the evening’s firework show was important to her. Other girls her age were
likely eager for the festivities—busying themselves with trivial affairs, such
as wondering if their hair ribbons matched their dresses, or if their mothers
might let them finally wear a corset. Those issues didn’t matter to Amelia. At
least today they didn’t. At dusk, Amelia was supposed to rendezvous with Boy.

She looked out the window from the
administrative building of Rosewood
Hospital. Her mother,
still wearing black since Father had died, worked at Rosewood as a nurse.
Amelia didn’t understand how the patients were sick—they didn’t look sick. She
saw them strolling through the gardens from time to time, but Mother said those
weren’t the really troubled ones.

“Mother, these clouds won’t hide the
fireworks will they?” Amelia said looking skyward with a frown.

“Well aren’t you the little patriot? A girl
your age so interested in celebrating our country’s birthday.”

“Don’t be getting your head full of bees,”
Mother said. “You know I’ll answer by the by.”

Mother had been in a foul mood all
afternoon. Despite the Independence Day holiday, she had been tasked to stencil
room numbers onto small placards. Mother had taken offense and had groused to
the doctor in charge, Dr. Johansson, that she was not a maid.

She set down room number 217 on the table
and looked out the window. “Perhaps the clouds will drop, but I’d be surprised
if they obscure the fireworks.”

Amelia made a gleeful clap that caused her
mother to smile. But her real worry was that she would miss Boy. She only saw
him at Rosewood and only during twilight hours. Last time, he had promised they
would see each other more often. She edged toward the door.

“Hallo, where are you going?”

“May I walk?” Amelia held her breath as
Mother produced a timepiece from her pocket and examined it.

“Well, the patients are locked in their
quarters,” she said. “But I want you returning before it’s fully dark.”

Amelia bolted for the door.

“And stay out of the dirt,” Mother called
after her. “I don’t want you looking all a ragamuffin tonight.”

“Yes ma’am.” She passed through the doorway
and rushed down the garden path toward the pond. Lined with heavenly white
roses, lilies and carnations that blocked her view on both sides, they exuded a
heavy floral scent that made Amelia feel a bit giddy.

“Boy? Are you here, Boy?” Amelia called out.
She had reached their meeting point out beyond the gardens. “Boy?”

He’d never told her his name. At first, she
thought it a secret, but once when she had asked, it seemed as though he
himself could not recall it. Amelia thought that very odd, but Mother always
said, “Keep your breath to cool your porridge. Others can manage their affairs
without the help of a meddlesome girl.”

Amelia did not want to be rude to Boy, so
she had not broached the topic again.

She ventured off the path and nearer the
tree line—the woods that walled in the hospital’s eastern border. So as not to
soil her dress, she stepped carefully. “Boy?”

She whirled about. There he was, standing in
the path from whence she’d just come.

“Never you mind,” he said with a smile.

Boy was near her age, perhaps a year or two
younger, but he could do things that Amelia only wished she could do. He always
seemed to know when an adult was nearby and how to navigate through the bushes
and trees to avoid discovery so that they could explore on their own.

“But I mustn’t get dirty tonight.”

Boy shuffled ahead of her. He took his steps
gingerly as though both of his feet were painful to walk on. Boy’s clothes were
not ragged, but they looked old-fashioned. His hair was cut short, in a way she
had seen in old-time photographs. Amelia followed him.

“Boy, is it your mother or your father who
works here at Rosewood?”

He grabbed for the green sprig of a plant,
but it didn’t move. “No. Neither.”

Amelia focused on Boy as she followed him
deeper into the woods, but she soon noticed her inattention to the path had caused
her to step in a tiny puddle of mud. Her shoe would come clean, but she’d also
soiled her hemline. Mother would almost certainly scold her. Boy continued to
limp ahead of her on the path. Rather than try to clean her dress, she
scampered after him.

“If neither works here, then why do you
come?”

“To help you with what?” she called out.

He turned and faced her. There was something
about his expression, or perhaps the look in his eyes, that made him appear
older and certainly less innocent. “I’m different.”

Amelia tried to act nonchalant. She swatted
at the branch of a sapling and pretended not to pay Boy any attention, but she
could feel him staring at her. Her stomach quivered with an unusual excitement
and she could no longer contain her curiosity. “How did you get this way?”

His voice came out deeper. “I did something
special that made me this way.”

Boy smiled and gazed into her eyes. It made
her feel lightheaded—not dizzy but tingly. Amelia had seen older girls act
silly and scatterbrained around boys, but she was determined not to let that
happen to her.

“Would you like to be special too?” he
asked.

Before he could answer, a howl arose from
somewhere further down the path that could not have been made by mere wind. Its
tone changed, and the shrill pitch hurt Amelia’s ears. She plugged them with
her fingertips. Above her, the treetops swayed mightily.

The noise stopped and the air became icy
cold, prickly against Amelia’s skin in contrast to the warm July evening.

“No,” Boy said, looking up into the tree
branches, “this is my place.”

Just off the path from where Amelia and Boy
stood, a hazy vapor began to form. Amelia blinked, as she saw it change from a
swirling outline of smoke and light into the shape of a young woman with
delicate features. Her shoulder-length blonde hair fluttered in the breeze,
looking every bit as real as Amelia’s own curly hair.

“My place,” he repeated at the woman.

“It is
not
your place,” the woman
said. Her stern voice contained an odd echoic quality.

Amelia trusted Boy to protect her and she
took a few steps toward him, shivering. He remained motionless. His face
expressed both petulance and fear.

“Boy,” Amelia whispered, “who is she?” Her
knees trembled but her feet felt locked to the path beside him.

Amelia looked back at the woman. Her
beautiful complexion began to transform into charred, black flesh. Her
shimmering hair burned away leaving ragged, uneven stalks. Clumps of it peeled
from her skull. Her dress smoldered. Amelia smelled the rank odor of soot.

The woman pointed a blackened finger at
Amelia, who stood rigid with fright. “Get away from this place.”

Amelia desperately wanted to run, but how
could she desert Boy? And her legs still wouldn’t move. This feeling reminded
her of the day Father died. When Amelia had heard the news, she’d felt woozy
and unbalanced, yet frozen. The doctor had called it shock. She hadn’t been
able to feel anything, even sadness, until the next day. But this kind of shock
was already wearing off. The numbness being replaced by something worse;
something both electrifying and foul. She remained frozen, but her insides felt
like everything was trembling.

“Well then,” the woman said, her lips
forming a sardonic grin, “you can watch what I do to him.”

Boy flinched at the woman’s words, but held
his ground.

Slowly the woman evaporated back into a
swirling mist. White plumes silently swept toward Boy. Upon contact with his
skin, the mist, or Boy’s flesh, sizzled. His mouth opened emitting a noise that
seemed to be comprised of many cries. Amelia once again found herself
forcefully plugging her ears. It was as if his throat contained a dozen
discordant voices. Amelia had learned about hell in church, but she had never
conceived of tortured wails so disturbing. Screams that must have originated
someplace far away from Pullman, Illinois.

Boy’s mouth seemed to stretch and pull as
the wails continued to escape. Then they stopped. Boy was gone.

In the place where he’d stood, the woman’s
apparition reappeared. Her charred face scowled. Black sockets stared out where
eyes had once been.

Amelia turned back toward Rosewood and began
running, not caring about soiling her shoes or dress. As she ran, she could
sense the woman approaching silently from behind. She inhaled deeply. “Mamma,
help! Help me!”

Amelia reached the tree line, but fell.
Above her, a cold mist swirled about kicking up dirt and mud onto her dress.
Would the ghastly woman do to her what she’d done to Boy?

Lightheaded, Amelia struggled to regain her
footing. She attempted another step toward safety, but it was no use. The
charred woman now blocked her way.

Alone on a desolate path, Amelia Lovecroft
blacked out.

The fifty-sixth floor of the Willis Tower
provided a majestic view of downtown Chicago. Skyscraper shadows stretched out
toward Lake Michigan on the autumn afternoon, as though reaching vainly for the
distant shores on the other side. Known for its first thirty-six years as the
Sears Tower, it had been the tallest building in the world. It was also home to
the corporate offices of Sci-D TV.

For the umpteenth time, Zach Kalusky brushed
imaginary creases off his slacks and used his palms to press his jacket and
tie—as though a wrinkle-free appearance would ensure a successful outcome to
the upcoming meeting. His black sports coat contrasted his pale complexion but
matched his wavy hair. The tie was coal gray with emerald flecks, which, Sara
said, brought out the green in his hazel eyes.

Razzamatazz (A Crime Novel) by Scoppettone, Sandra
The Furies by John Jakes
When You Wish (Contemporary Romance) by Handeland, Lori
What the Outlaw Craves by Samantha Leal
The Paris Librarian by Mark Pryor
Brontës by Juliet Barker
Luz: book i: comings and goings (Troubled Times 1) by Luis Gonzalez
Lovestruck, a Dragon Story by Bonnie Vanak
By the Numbers by Chris Owen and Tory Temple
St. Peter's Fair by Ellis Peters