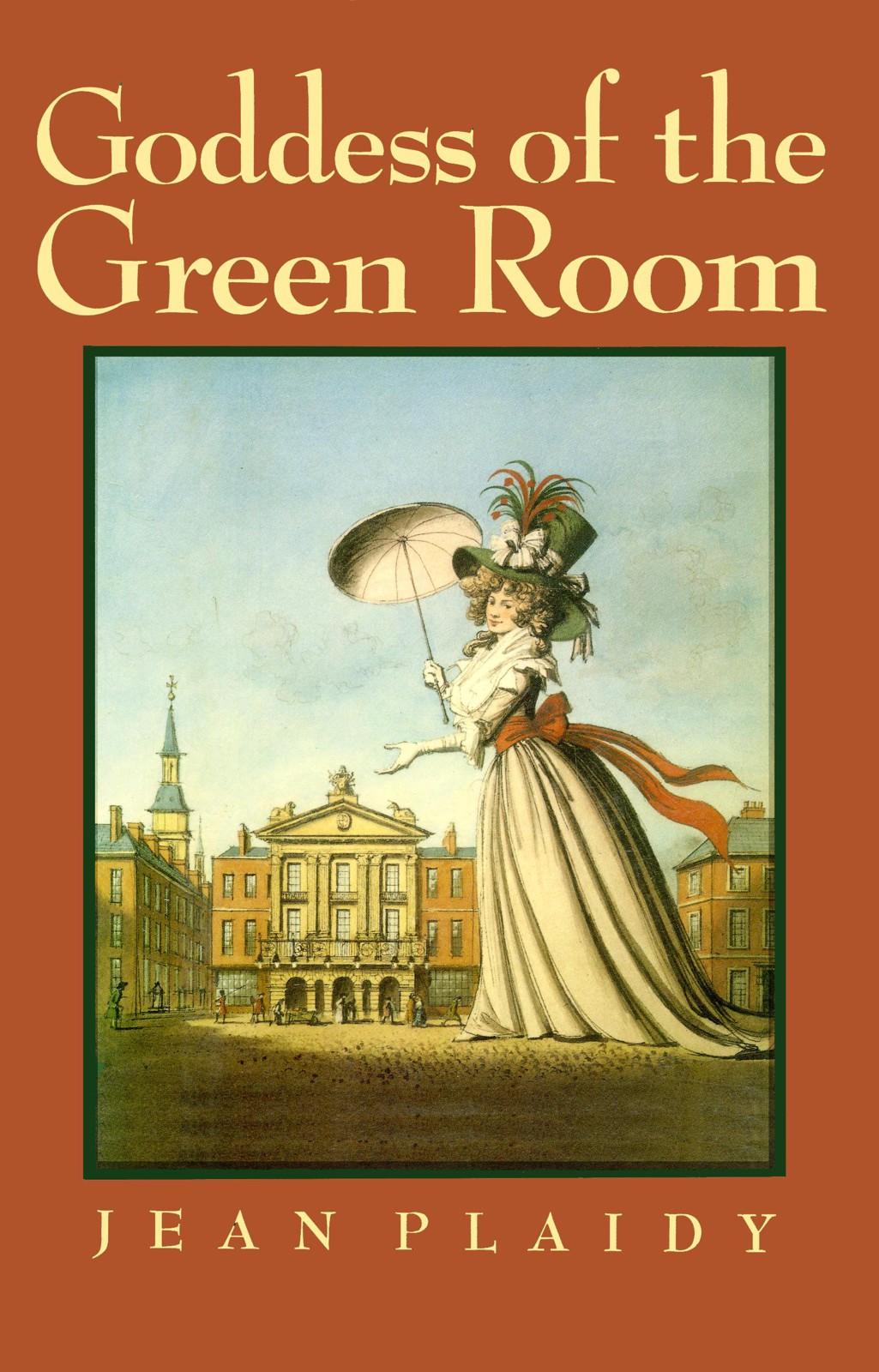 A royal command and a battle

The return of the sailor

On the road to Canterbury

The brief intrusion of Master Betty

‘For the last time’

Treachery in the family

The order of release

Like his brothers, William, Duke of Clarence, has had his share of romance and intrigue. And when he falls in love with Dorothy Jordan, the notorious Irish comic of the Drury Lane Theatre, gossipmongers are ecstatic, for William is not the only one with a shady past. Dorothy’s notorious offstage life combined with William’s less than decorous behaviour will make great copy for the scandal sheets, while their affair lasts.

But everyone is surprised when the casual dalliance develops into a twenty-year marriage in all but name. William’s penchant for living beyond his means ensures that Dorothy can never leave the theatre as her income is a necessity for the couple. This becomes a contentious issue as she wants nothing more than to be a full-time mother.

Jean Plaidy, one of the preeminent authors of historical fiction for most of the twentieth century, is the pen name of the prolific English author Eleanor Hibbert, also known as Victoria Holt. Jean Plaidy’s novels had sold more than 14 million copies worldwide by the time of her death in 1993.

The Shadow of the Pomegranate

The Thistle and the Rose

The Captive Queen of Scots

The Murder in the Tower

A Health Unto His Majesty

The Road to Compiègne

Madonna of the Seven Hills

Spain for the Sovereigns

The Princess of Celle

The Prince and the Quakeress

Indiscretions of the Queen

Victoria in the Wings

The Captive of Kensington

The Queen and Lord M

The Widow of Windsor

The Lion of Justice

The Revolt of the Eaglets

The Heart of the Lion

The Prince of Darkness

The Battle of the Queens

The Queen from Provence

The Hammer of the Scots

The Follies of the King

The Vow of the Heron

The Star of Lancaster

The Sun in Splendour

Queen of this Realm: The Story of Elizabeth I

The Lady in the Tower

The Rose without a Thorn

The Queen of Diamonds

The tenth book in the Georgian Saga 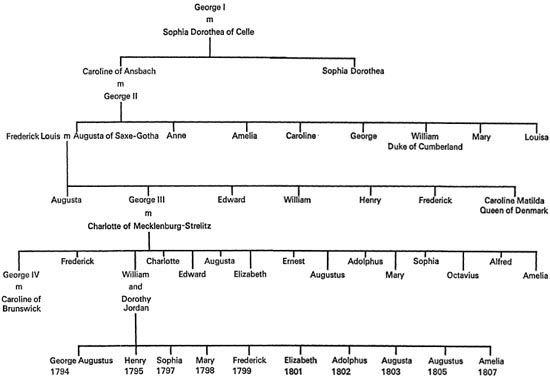 for William’s and Dorothy’s Great-Granddaughter,

with admiration for her work,

gratitude for her friendship

and love for herself

IN A LITTLE
room in South Great George Street in the city of Dublin two girls were discussing a matter of great importance to them. The elder, handsome and elegant in spite of the poverty of her clothes, was clearly in a state of tense anxiety; the other with the piquant face and the lively expression, was trying to calm her.

‘You will do it, Hester,’ she was saying. ‘Why, it’s in the blood. You inherited it all from Mamma.’

‘I know,’ said Hester, ‘but you can’t imagine what it’s like, Doll, to face an audience for the first time.’

Dorothy was on her feet. ‘Oh yes, I can,’ she said. ‘I’ve seen enough of it, Heaven knows. I remember when Mamma and Papa were playing their parts and we all had to listen to them. I can smell those tallow candles now. I always used to wonder what would happen if they toppled over and set the boards alight or perhaps caught the curtains.’

‘I wish,’ said Hester, ‘that Papa had not died, and that we had more money.’

‘People always wish for more money,’ put in Dorothy quickly. ‘And don’t forget Papa deserted us before he died.’

‘But he was kind. He always sent our allowance.’

‘I’d rather have done without it, when I remind myself that he had to marry a rich woman to provide it. I’d rather earn my own money.’

‘And that won’t be much in your milliner’s shop.’

‘I dare say not to that famous actress, Miss Hester Bland.’

‘Nonsense,’ retorted her sister. ‘Of course you’re going to be a success. Mr Ryder thinks so. Oh, he has great hopes of you. I heard him telling Mamma so. He thinks you are going to bring business to his Crow Street Theatre. Hester, it’s a wonderful life, playing parts on a stage. And they have benefit nights which can bring in as much as thirty pounds. One day a manager from London may see you. How would you like to play at Drury Lane or Covent Garden?’

‘You are not, Hester Bland. The family fortunes are on the rise. No more skimping and screwing.’

‘What expressions you use, Dolly!’

‘Call me Dorothea, because that is what I am going to call myself when our fortunes are made. When I have a famous sister I shall boast to all the ladies who come into the shop. Try on this confection, Madam. The finest tulle I do assure you and the flowers are made of the best velvet as worn in royal circles. And you are being attended to, Madam, by the sister of the famous actress Miss Hester Bland. You will soon be obliged to travel to London to see her, for Dublin will not be good enough for Miss Hester Bland. Did you know that the King himself has sent for her to play before him in Covent Garden?’

‘Dead shepherd; now I find thy saw of might

Who ever loved that loved not at first sight?’

‘If I were to be a famous actress I’d like a singing part. Well…

“
Under the greenwood tree

Who loves to lie with me

And tune his merry note

Until the sweet bird’s throat…
” ’

‘I’m in no mood for songs, Dolly, though I must admit you sing them sweetly enough. But your stockings are falling down and there’s a rent in your gown.’

‘I know. But as long as I am neat for the shop what matters it? Allow me to be as untidy as I please at home.’

‘You’ll be in the theatre tonight?’

‘Of course. With the whole family. I expect even little George will be there. You can count on the family’s support, Hester.’

‘Let me hear them. Come on.’ Dorothy was beginning to act the part Hester was to play that night when their mother came in. Grace Bland had clearly been a beauty in her youth, but that
beauty was much faded by years of struggle. There was a perpetual frown between her eyes which always moved Dorothy deeply; she wished that she could earn a great deal of money so that they need not be always wondering how to feed the family. But Hester was going to make their fortunes; and it did not matter which member of the family did it as long as it was done.

‘That’s right, dear. She must be word perfect. I remember my first part. Oh, that was years and years ago. But I recall going through agonies.’

‘As I am now,’ said Hester grimly.

‘Never mind. It’s all part of the life. When you’ve played through to the end and the audience applaud… then you forget all your qualms and you’ll say to yourself: “This is the life for me.” ’

‘Did you say that, Mamma?’ asked Dorothy.

‘I did. And I’ve never regretted it.’

Was it true? wondered Dorothy. Did she ever, during the difficult years, think of her father’s parsonage where life must have been very different from this one for which she had forsaken it. Perhaps there would have been poverty in the parsonage though, for country parsons were often poor. Grace often talked of her girlhood and of life in a small Welsh village and the three girls – Grace and her sisters – deciding that it was no life for them and they were going to seek fame and fortune on the stage. ‘Our father was horrified, as you can imagine,’ Grace told her daughters. ‘He called us “strolling players”, but we didn’t care. He said that if we went on the stage we could fend for ourselves… and we did.’ They were courageous, Dorothy decided – three girls from the country coming to London to try their luck on the stage; and they had not done badly. Aunt Blanche, though, had tired of it and gone back to Wales where she had married and settled down in the village of Trelethyn; but the other two had stayed on. Aunt Mary now and then played in London, and their own Mamma had acted while she was raising a family; and now that they were deserted and there was no money coming in, they were looking to the stage again, and this time it was Hester who was to make their fortunes, for the little she and Dorothy had been bringing in from the milliner’s shop would not keep them, and
something would have to be done. So now that Mr Ryder had offered Hester her chance – because she was Mamma’s daughter of course – they must look to her.