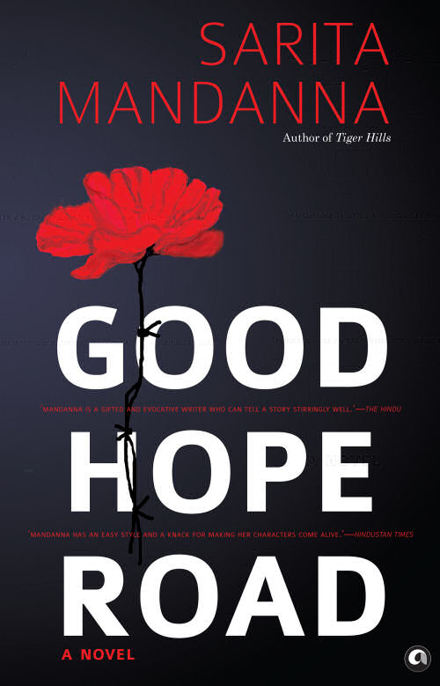 First published in India in 2015 by

This is a work of fiction. Names, characters, places and incidents are either the product of the author’s imagination or are used fictitiously and any resemblance to any actual persons, living or dead, events or locales is entirely coincidental.

No part of this publication may be reproduced, transmitted, or stored in a retrieval system, in any form or by any means, without permission in writing from Aleph Book Company.

This book is sold subject to the condition that it shall not, by way of trade or otherwise, be lent, resold, hired out, or otherwise circulated without the publisher’s prior consent in any form of binding or cover other than that in which it is published.

There come times in a man’s life that change everything. He looks about him afterwards and sees that the leaves have turned, as if in an instant. The river has altered its course, no longer flowing southward or anywhere familiar at all. It is changed, the ripples from hidden trout seeming to flow up-current, the stones in its bed flipped over, exposing pocked bellies so long buried in the mud.

here’s mud in the South too, all sorts of it. Hard mud, under a sun bakin’ down so strong that the birds be fallin’ dizzy from the trees and near barbecued on the hot ground. Mud packed so tight that it sets the dogs to pantin’ as they hunt for shade, liftin’ their paws quick and delicate like, ’cause the ground, it burn them so. Not my feet though, they too rough used to notice – I been paddin’ ’bout barefoot most of my boyhood, all across the dirt roads and back ways of the Quarter. There’s soft mud, after the rain, she fall and loosen the soil so next year’s crop can come singin’ outta the earth. Red mud, light mud, in-between, Creole-coloured mud.

I seen all kinds of mud.

Upon all my borned days though, I ain’t never, not ever, known as much mud as there’s here at the Front. The fields, the woods, all torn up and left insides-out. Flowers gone, the grass, trees even, as if they all been sucked deep into the earth until only mud be left. Brown and black, the sort that stick like tar and blackstrap to guns and gear. The kind that suck at marchin’ boots and spit up the dead – not two days since they been buried when the mud, she churn and turn and heave them right out again. Itty bitties of them: elbows, knees and feet; pieces of the broken men lyin’ below.

There this boot I seen once. A trench wall gone and collapsed from the rain, right on to a sleepin’ soldier. His buddies, they scrambled hard to get him out, but turns out they started their diggin’ at the wrong end – by the time they uncovered one of his boots, it was already too late for him. The more they dug, the mud, it started to slip and fall again, until there was nothin’ to do but smooth the mud best they could and leave the poor bastard with his boot stickin’ straight out from the wall.

That was ’bout all the burial he got, but it since become a habit with every man to spit on our palms and give that boot a quick polish as we walk past, until darned if it ain’t become the shiniest, spiffiest hobnailed boot in all of wartime France.

A real good landmark it be too – ‘right by the dugout, past the duckboards, left by the boot’ – couldn’t miss it if you tried. It ain’t the feet that get to me, but the fingers and hands. They stick up from the mud, as if the dead, they diggin’ free of their graves. Sometimes when the wind blows, they look to be wavin’ at me.

One of the first such I see, it lie not two paces away. We’d moved to the sector just the night previous, and the Boche sent up a real humdinger of fireworks to say Hello. Whizz bangs, ash cans, potato mashers – everythin’ the Boche got, they thrown our way.

We hear the shells come a-whistlin’ and a-roarin’, and back in those early days, before I learned to tell by its sound just how close a shell was goin’ to fall, I be ’fraid every time that this here shell, it makin’ straight for me. No place to run, nowhere to hide; we crouch in the trenches, coverin’ our heads with our hands as if this goin’ to save us when a shell comes singin’ our names. All day long the shells fall and when finally they stop – and the earth, she stops buckin’ – I get up on my feet. My ears still ringin’ as I climb on to the fire step, dazed like, to have a look through the sandbags.

There it was, the hand, stickin’ straight up from the mud.

One of ours
, that the first thing that come to my mind, but no, I look around at our part of the trench, and we all done good this time. Gaillard, he sittin’ up and cussin’ somethin’ fierce. James start to whistle, coolly brushin’ the dirt from his legs, but his breath don’t always come into the whistle and the tune comes out choppy like.

Mud still dribble-drabblin’ down the walls of the trench; it always do, I will soon learn, after a shellin’. Somebody is screamin’ some distance away, to the left. Someone always be, after the shells. I tell you this: ain’t no human voice meant to make such pain-filled sounds, and no person made for hearin’ them. This man, he screamin’ somethin’ awful; all of us listen, although we try not to. I stare at the hand, and in between the hollerin’, and James’ whistlin’, and the soft, scratch-scratch sounds the mud make as it settle, I hear somethin’ more.

By and by the screamin’ slows. The man who been wounded, he taken to the dressin’ station, but it don’t look so good, we learn. Still, it’s been a lucky evenin’. The trenches, they all held under the shellin’, ain’t none that caved in. That legionnaire, he our only casualty. Well, him, and Danny, who be visited by Miss Dia Rhea once more. She been his loyal companion for a few days now. It ain’t as bad as it could have been – Dia be less potent than the other Rhea sisters, Pia and Gonna, but try tellin’ that to a man shittin’ his guts out into a latrine bucket.

A weak joke, but we laugh anyhow, glad to shake the tension that stays on after a shellin’. Like wires on a banjo after the music’s been plucked from them, twangin’ quiet like, back and forth.

For some reason, I say nothin’ ’bout the hand.

The Captain come by in a while. Ain’t no orders to attack tonight, he say; seem like the shellin’ is the last show for the evenin’. The field between the rolls of bobwire go quiet as the sun fold up and the light start to die. Up and down the trenches, men curl white and tired in their coats. I find it hard to sleep. I keep thinkin’ ’bout that hand, stickin’ so straight and alone from the mud. It a French hand, Boche, or English? I wonder. A man’s hand is ’bout all I can tell. I stretch out my own, wrist stiff, fingers wide; the first stars throw a cool light over the lines in my palm.

I touch the gris-gris in my pocket and think suddenly to send up a prayer. For that hand, and the man it once belonged to, for the wounded this evenin’, for all of us.

The prayer, it one I ain’t said in a while, one Pappy taught me moons ago. I repeat the words silently, holdin’ the gris-gris in my fingers. It a right powerful gris-gris, brimful of protection and magic, and as I rub the fur on the rabbit’s foot, Pappy’s schoolhouse come floatin’ into my mind. The wooden floorboards with the crack to one side. The window stuffed with rags – the glass been broken so many times with a brick or similar thrown hard and bitter, made sense to stop tryin’ to fix it and just leave it broke. Pappy, so serious, holdin’ the Bible as he teach.

‘Obadaiah,’ I hear again, a whisper over the wire. My eyes fly open and the schoolhouse is gone, just like that, disappeared into the night.

The minutes tick past so awful slow that it’s a relief to get on guard duty. I climb up on the fire step, leanin’ my rifle against the wall as I brush away the night crawlies litterin’ the elbow rest. Some ‘rest’ – most these trenches been built for one size of man – a not so big man – and I always got to fidget some to get comfortable. I set my eyes to the loophole. My sight takes some adjustin’, from hours of lookin’ at nothin’ but this way to Danny shittin’, to that way at Gaillard bayonetin’ every toadfrog he find – and there be plenty on the water-filled floor – to straight upwards at the peel of grey sky. Feel good, to let my eyes stretch into the night.

A temporary truce was called in this sector two days ago, we heard tell, so that both sides might bury their dead. There’s the faint bite of chloride of lime in the air, from where it was sprinkled ’bout the trenches and across No Man’s Land. The field before me all hacked up once more from today’s shellin’, but the bobwire belts still look fresh repaired. Ain’t nothin’ lyin’ snagged on them tonight, no fallen men, none of their gear. I run my eyes real careful over the wires, post to post, one end to the other, and wonder just where the snipers are lyin’ in wait. I look over the heaps of earth, and the shell holes filled with silent, gun-shine water.

The hand is still stickin’ from the mud, so clear in the starlight that a sniper could take out every finger, one by one, if he wanted.
A Boche hand, or English or French?
I wonder to myself again, but ain’t no way to know. It’s a man’s hand, is all. Young, I figure – the skin fits tight over the fingers. Ain’t been dead too long either; not yet been time for it to turn green, to bloat with gas and stench.

A man on guard duty, all kind of thoughts start to go through his head as he stand on the fire step. Nothin’ to do for two hours but pick over mist and shadow, wonderin’ if the Boche gonna attack on his watch. Minute after minute tick past with ain’t nothin’ happenin’, and slowly his mind start to wander, this way and that. The whisky smell of Perdido Street, the dolls shakin’ their hips so fine. The blind praline vendor, the Rexall on the corner, and watermelon, red to the rind. He grin in the darkness, ’memberin’ old fights where he won, drum his fingers thinkin’ of them that he lost. He fuss and worry over things he might’ve done different, dream of all that he goin’ to do, all the places he might get to after the war.

Arthur and the Fenris Wolf by Alan Early
The Best American Mystery Stories, Volume 17 by Lisa Scottoline
The Pirate Queen by Susan Ronald
The Red Door Inn by Liz Johnson
Wrestlings Bad Boy Tells All by Bobby Heenan
Beauty and the Spy by Julie Anne Long
The Wizards of Venus Book One: Magic Touch by Dakota Trace
Indecent Encounter: The Silverhaus Affair by Parker, M. S.
Atlantis by Rosberg, Jessica
On the Meldon Plain (The Fourline Trilogy Book 2) by Brondos, Pam