Read Guild of Truth 01 - Silent as the Grave Online

Guild of Truth 01 - Silent as the Grave 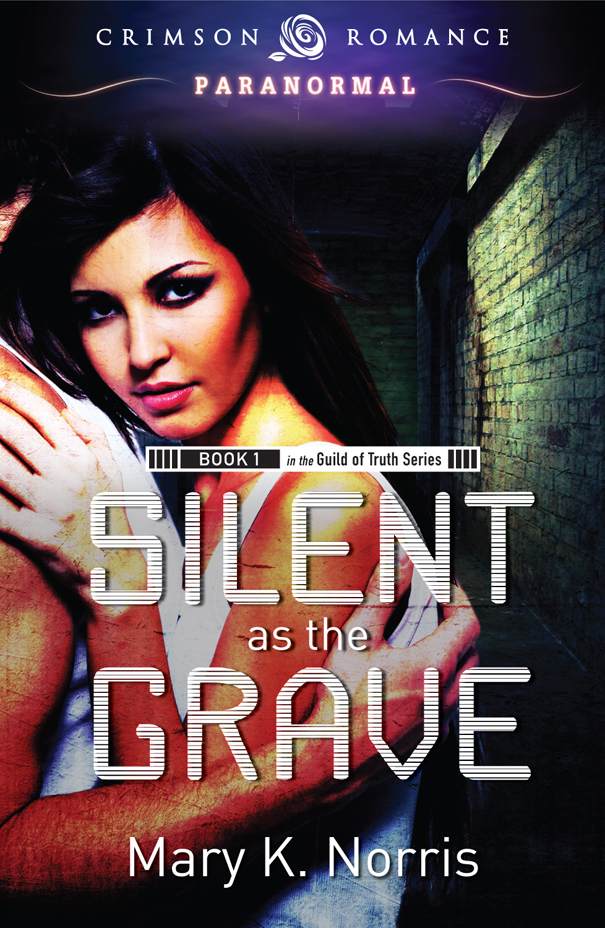 Silent as the Grave
Book 1 in the Guild of Truth Series
Mary K. Norris

This edition published by Crimson Romance

To my Opa, I miss you every day.

I’d like to thank all my family and friends who believed in me and supported me. My parents especially, you guys never let me give up on my dream. Thank you. To my brother and sister, you always believed in me and were there for me. I’ll never forget that.

Special thanks goes out to the Merki-Norris Clan for your never-ending support. I’d also like to thank everyone at Crimson Romance for giving me this amazing opportunity, especially Jennifer Lawler, who took a chance on me and believed in my book. Thank you everyone, I wouldn’t be where I am today without you.

Felix smiled at the little girl one seat over. She was waiting for her mother to come out from the patient room where she was discussing whatever treatment their dog needed with Sydney. He could tell by the little ways she wrinkled her nose that the smell of dog food was getting to her. He’d long since become accustomed to the smell. A hard concept for him to wrap his mind around considering his nose was used to the aromas of fresh baked goods from working at the bakery.

The sacrifices he made for friendship.

The little girl returned his smile and continued to shift in her seat. A child could only remain in one position for so long.

“Hey.” He leaned toward her conspiratorially. “You want to see a cool magic trick?”

The girl’s honey-brown eyes brightened for a moment before her face saddened. “My brother told me magic isn’t real and only dumb little girls believe in it.” She hugged her arms to her chest in a gesture that told Felix she hadn’t quite broken the habit of carrying a stuffed animal around with her.

He eased back from her and dug into his pocket. “Is that so?” He held up a quarter before letting it rest in the palm of his hand. “Ready?” The little girl scooted to the edge of her seat.

Felix grinned at her hopeful expression.

He waved his other hand and the coin vanished.

“Whoa!” The little girl was practically in his lap. “Where’d it go?” She grabbed his hand and flipped it over.

He held his hands up and shrugged. “It’s gone. I told you.” He waggled his fingers for effect. “Magic.”

She continued to look for it. “Yeah, but that’s what they always say, and then they pull it out from behind my ear.” Her large, honey eyes lit up, snagging on the side of his face. “Or from behind
your
ear!” She clambered into his lap and grasped his head between her little hands.

Not this time,
he thought as she tilted his head this way and that.

If he’d been able to return things after Erasing them, it would have made his life a helluva lot easier when his powers had first manifested.

Before the little girl could give him a headache, he gently pulled her away from his face, keeping her little arms and hands at a safer distance. It still amazed him how open minded children could be. It was a breath of fresh air. There was no judgment, no fear. He could blatantly use his powers, and this little girl didn’t even bat an eye. She simply sat on his lap, eyes glittering.

“You want to know why those other people bring the coin back?” he asked her. “It’s because they didn’t really make it disappear, they only hid it.”

“Not even if you really,
really
tried?”

His smile slipped. The question was asked in innocence, but that didn’t stop his gut from sinking as he remembered all the times he’d desperately tried.

He shook away the lingering ghosts of his past and pasted that smile back onto his face.

“Not even if I really,
really
tried,” he told her.

She considered him for a moment, and he half expected her to jump from his lap and tell him how lame he was that he couldn’t make a damn coin reappear.

Well, I could always pull another one from my pocket …

But after a few more seconds the little girl nodded to herself and scooted closer so she could wrap her arms around his neck. “That sounds like real magic to me. Two years ago I had this one pet called Mr. Hobbles … he was a Junebug that I used to practice magic with … ”

Emily’s mom emerged from the patient room fifteen minutes later, clearly astonished to find her daughter in the lap of a complete stranger and positively glowing with excitement. She collected Emily from Felix, sprouting apologies and thanks for his patience with her daughter.

“Bye, Felix.” Emily waved the entire time as her mother tugged her from the vet like their dog on its leash.

Once the door shut and they disappeared into a large SUV a soft snort drifted over from behind the reception desk.

Felix glanced over to find Niella, not bothering to hide her amusement. “I don’t get it,” she said. “What do they see in you? It’s almost sad how easily they fall for you. That poor girl is going to have a crush on you well into middle school.”

He shot her a grin. “I can’t help it. At least I set the bar really high for her.”

“You sure did,” she said sarcastically. “Now all it’ll take to get her engine going when she grows up is some cheap magic trick. Well done.” Niella gave another snort and turned back to her paperwork.

“You’d be surprised how hard it is to find good magic shows nowadays,” he said. “You laugh now, Niella, but just wait. Give it a couple more years and you’ll be as head over heels as my youthful followers.”

He gave her a few more moments but the retort never came.

He leaned forward in his chair to get a better view.

Her head was lolled onto her shoulder, her body tilting precariously over the side of her wheelchair.

Felix shot from his chair with a curse.

“Niella? Come on, I wasn’t that boring.” He gave her shoulders an experimental shake but he already knew she wouldn’t wake.

“Damn.” He ran a hand through his hair. It’d been so long since she’d had a Dream in front of him, he’d forgotten how disconcerting the whole thing could be. He looked around the lobby, lost. What the hell was he supposed to do?

He thought about calling Sydney from the back rooms, but there was nothing she could do. Her powers only negated the use of others and would likely wrench Niella from her Dream. And he had a tingling suspicion that would hurt like a bitch. Besides, didn’t they say never to wake someone from sleepwalking? Did the same concept apply here?

Gritting his teeth against this sudden helplessness, he kept his hand firmly on her shoulder to keep her from falling out of her wheelchair and remained where he was, kneeling beside her.

He couldn’t imagine having to deal with having visions at random. All that information floating around through his brain … it made him grateful that he only caused things to vanish.

Hazel eyes blinked at him. He grasped her shoulders more firmly.

A flash of anger passed over her face, and he could have groaned aloud.

He knew better then to make it sound like she was able to control her Dreams. His heart sank further when she stared down at her mangled legs. Useless, she liked to call them.

He tried to steer her attention elsewhere. “Did you have a Dream? Anything we can do to help?”

Panic and fear flooded her face, and his whole body stiffened as her eyes sought his.

He could count on one hand the number of times he’d seen Niella frightened. His gut clenched. “Your Mirror Mate, she’s about to be ambushed. A trap.” She closed her eyes as if she was trying to rearrange all the fragments of her Dream into some kind of order. “There was a cage. Pain. She was able to manipulate sound. A Silencer. She’s at a house.”

She cursed under her breath and pulled paper from the reception desk. She scribbled something onto a scrap and thrust it into his hands.

This was so humiliating. After moving out seven months ago, Cali was already crawling back to her parents.

That’s what you get for trusting anyone.

Jessica had been her roommate, her sort-of friend, and she’d stolen Cali’s painting and hawked it to the highest bidder to get the money and run.

Cali exhaled. “Figured.” She’d been working on that painting for two months. It was supposed to pay for this month’s rent. It was a little too convenient that it was Cali’s turn to pay the full brunt when Jessica decided to take off. Her parents were going to love that.

Don’t think about that. Remember the job offer you got back in April. Vander said you were all but hired. Use that to lure them in, then when their defenses are down, pounce.

It was as good a plan as any, but that didn’t stop the nagging voice inside her that said her parents wouldn’t do a damn thing to help her. While she knew her parents weren’t the harshest out there, she still thought it a little heartless for them to force her to pay rent at eighteen or move out when neither her brother nor sister had to.

Jared and Garnet never got arrested.

It didn’t matter. Her parents never helped her when she’d been behind paying them rent. Why would they help her now? She’d once had to pawn off a gold bracelet they’d bought her for her sixteenth birthday so she could make her payment. Granted, she’d splurged that month on new oils and brushes, but her parents never approved of her art.

And that bracelet was hideous, so maybe they did you a favor.

Either way, she’d see this through till the end. She kept her head high as she unlocked the front door.

The drapes were pulled shut, casting the house in darkness. She squinted against the sudden change in lighting, giving her eyes a second to adjust.

A lone shadow lay hunched in the hallway.

The back of her neck prickled. “Hello?”

The lump didn’t move. Gripping her side bag, she pushed the door open wider with her shoe. The sun spilled into the hallway, not quite reaching the far end where it led into the kitchen.

Sweet Like Sugar by Wayne Hoffman
Hell Breaks Loose: A Devil's Rock Novel by Sophie Jordan
Fear Itself by Prendergast, Duffy
The Constant Heart by Dilly Court
Christmas Runaway by Mimi Barbour
Getting Back by William Dietrich
The Whites and the Blues by Dumas, Alexandre, 1802-1870
Bad Boy Billionaire (A Standalone Romance) by Cruz, Cara
The Mistress and the Hellhound by Mina Carter
Tote Bags and Toe Tags by Dorothy Howell