Read Hand of Fire (The Master of the Tane) Online

Hand of Fire (The Master of the Tane) 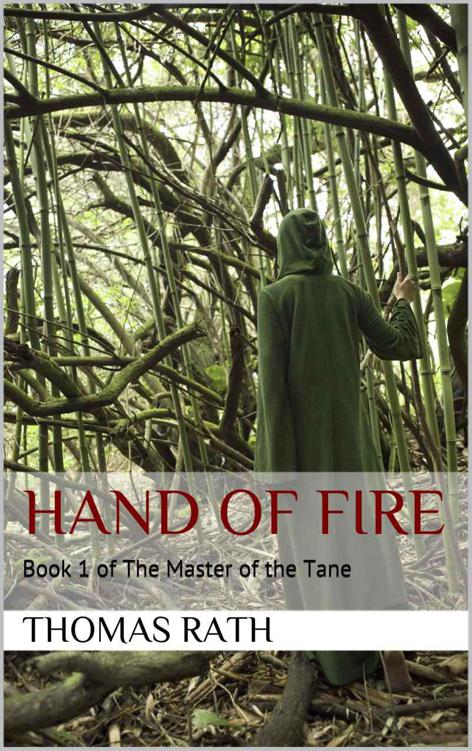 Book 1 of
The Master of the Tane

Gelfin stared in disbelief at the emptiness that extended out in all directions as far as his eyes could see. The forest of glorious trees that was home to the Chufa was gone. By some unknown magic, it had suddenly rippled like water disturbed in the gentle breezes of spring and then vanished into nothing leaving him and his people naked and without protection. The HuMans had been waiting. They were lined up with their terrible beasts ready to attack when the forest of Chufeiran trees disappeared. It had taken almost all of his strength, calling upon his Tane, to save himself from the rapid onslaught as the HuMans rained down upon the stunned Chufa slaughtering them with their long daggers and crooked bows.

He glanced down at the charred remains of nine HuMans and their riding beasts lying scattered about him, still smoldering in the barren dust. The putrid smell of burnt flesh wafted up against his nostrils replacing the last traces of the sweet smells of the Chufeiran. He felt drained. The sounds of horror and death echoed through the air as the fighting and struggle for life still continued in the distance filling his heart with dark sorrow and grief. Without the sacred trees, without their loving song and protection, they had been no match for the horde of HuMans that now invaded their lands.

The sound of pounding hooves suddenly caught his attention. Turning about, he cast sad, black eyes upon the beast and its rider as the HuMan pressed towards him howling in a bloodthirsty rage, his long dagger raised and ready to strike. Gelfin sighed at the stupidity of it all. The senselessness and brutality of the war that had brought ruin and anguish to so many. Now another would die, and for what? A simple misunderstanding? A difference in ideas and culture?

He could smell the sweat of the beast and feel the rapid heart beat of the HuMan as they advanced, bearing down upon him in a killing rage fueled by a lust for blood. Reluctantly raising his hand, Gelfin spoke the word and instantly flame engulfed his attackers, reducing them to a mass of scorched flesh and charred hair adding more bodies to the ring that surrounded him in death. He couldn’t help but wonder who would mourn the loss of the young soldier when he didn’t return home. A mother? A wife? Children? A tear ran down his wrinkled face as his strength suddenly betrayed his tall, thin frame and cast him to the ground. Without the living energy that radiated from the Chufeiran trees, his Tane had no anchor from which to draw its power. Instead, it was forced to extract its energy from Gelfin’s own life force, which depleted rapidly and was now almost completely drained and spent.

“Brother!” A loud mocking voice roared above the distant din of death and destruction. “Why, you have fallen. Have you lost all strength to stand?”

Gelfin turned slowly towards the voice that had now given itself over to fits of laughter. His eyes fell upon the robed form of another who had somehow approached without his detection. The intruder was the mirror image of himself, only covered in the robes of a sorcerer and with a face contorted into lines of darkness. “Zadok!”

The intruder’s face suddenly became a derisive look of shocked disbelief. “Why, brother! After all this time, you still remember me. I’m touched.”

Gelfin raised himself to a sitting position. “What are you doing here?”

Zadok laughed. “I came to watch, dear brother. I came to enjoy the day.” Zadok raised his arms and looked about taking in his surroundings as if merely enjoying the pleasant frivolities of a lazy spring day. “It is lovely, don’t you think?”

The anger in Gelfin’s voice was obvious as he replied. “How can you joke in the face of all that has happened? Look around you. Nothing but death! The Chufeiran are gone!”

Zadok looked about as if noticing for the first time the barren and empty land. “Oh, that. Well, it was a bit taxing but I must say that I have done an exquisite job. Wouldn’t you agree?”

The sudden realization that fell upon Gelfin gripped him as if his heart was being ripped from his chest drawing out a soft moan of anguish from his dry lips. “Oh dear, brother,” he breathed. “What have you done? What have you done to our people?”

Zadok’s face curled into a sneer of anger and hate. “Not our people,” he screamed. “Not ours, yours! They’re your people, Gelfin, remember? You had me exiled. Your own twin brother! Your own flesh and blood and you had me cast out for helping a child.”

“I had no choice! The council had decided. You broke the law by using sorcery. There was nothing I could do!”

Zadok suddenly kicked out with his foot and connected with Gelfin’s ribs stealing the breath from his brother’s lungs. “Lies! All lies! You never loved me or cared about me. They always liked you. You had the gifts. You were special. I was left with nothing. You should have protected me. You should have stood up to the others and protected me!” Zadok’s face had become a mask of rage and fury while his body shook with unleashed emotion.

Gelfin gave him a pitying look, his breath slowly regaining normalcy. “I tried,” he said softly. “I have always loved you brother and I did try.”

Zadok suddenly relaxed, the rage leaving him with a breath. “No matter now, dear brother. What matters is this day. The council lays in its own gore now, payment for their folly. And you dear brother,” Zadok spat glaring with evil intensity, “you will join them soon with the rest of your pitiful people.”

The sudden sound of approaching riders brought both heads around revealing the advance of more HuMans poised atop their armor covered riding beasts. There were twenty in all; each covered with similar armor that was mirrored by their mounts and shone brightly in the morning sunlight. One stood out from the rest, his armor draped in a covering of red silk with a mark of intersecting and curled lines emblazoned in gold on his chest. As they approached, the riders suddenly fanned out to either side surrounding the two brothers who watched and waited; Gelfin for his doom and Zadok for his reward.

“So,” the silken one said as he pulled up in front of them, still retaining his seat atop his armored beast. “This must be the infamous Chufa leader who struck such terrible fear into the hearts of my men. You see,” he shouted to those around him, “he is nothing but a pig that wallows in the mire.” The silken one’s men laughed nervously as they eyed the remains of their comrades littering the ground around the Chufa leader.

“Who are you?” Gelfin asked, the sadness evident in his soft voice.

The silken one looked to one of the HuMans at his side and motioned impatiently with his head. The man dismounted and stepped forward taking on an air of contempt as if the words he would speak were too elevated for a mere Chufa. Clearing his throat, he bellowed much more loudly than needed for Gelfin, who sat just feet away, to hear his words. “You are blessed to receive the presence and glory of his Lordship, King Bedler, Conqueror of the four lands, liberator of the Gentrees, master of the great Azure, ruler of the Pryn Galor, blessed of the Seven Sisters, head of the royal line of Rhent, holder of the great crest, lord of all he surveys, and,” he finished with a slight sneer, “exterminator of the evil Chufa race.”

Gelfin eyed the HuMan leader who smiled down at him as if especially pleased with the final words spoken by the royal courier.
Finally
, he thought to himself,
the one who deserves death
. Slowly lifting his hand, Gelfin spoke the word.

King Bedler’s eyes went wide in terror as the fire shot forth from Gelfin’s hand. His men instinctively pulled at their swords, though the effort was futile. Nothing could stop the inevitable collision that would sear the king’s flesh into rot, adding it to those that already littered the ground. Gelfin smiled. Justice would be served this horrible day.

But just as the fire reached its goal it wavered and then disappeared. Bedler blinked, his eyes protruding discs of terror as a slight breath of burned hair rose from his singed mustache. Gelfin dropped to the ground, his limbs completely void of strength as his QenChe Tane sapped his last remaining reserves. He stared at the unharmed king in bewilderment at what could have happened to steal the fire he had sent to devour him. A slight chuckle from his brother gave him his answer. “Zadok!”

“Yes, brother. Now you see the power I hold! Now you see who is better! It was I they should have made leader of the Chufa! It is I who holds the greater power! With me, none ever would have died as all have under your rule!”

King Bedler’s voice suddenly broke through Zadok’s raging. “Kill him! Kill him this instant. I want his head stuffed and on my wall!”

Nineteen men drew their swords and dismounted in a rush to obey their master who beat at his face to keep the hairs under his nose from igniting on the blowing wind. “NO!” Zadok suddenly cried, quickly placing himself in front of Gelfin and halting those who approached. “That was not the agreement!”

Bedler glared at the Chufa sorcerer for countermanding his order and then reluctantly motioned his men away. Relaxing his icy stare, he shrugged. “Very well,” he said waving to his men who quickly remounted. “As agreed then. But do it quickly before I lose patience and change my mind.” With a final look of disgust, Bedler spat at Gelfin before turning his mount about and kicking it into a fast gallop, followed quickly in step by his entourage of men.

Zadok turned from the retreating king and his soldiers and glared at his brother lying helplessly on the ground beneath him. “Where you should be, brother,” he jeered, “at my feet, begging for your life. Beg!” he cried. “Beg for your life! Beg me not to rip the TanIs from your ankle and send your soul to hell! BEG!”

Gelfin said nothing, but only closed his eyes and waited for his death. The thought of losing ones soul by the removal of his TanIs would cause any Chufa to shake in terror, but Gelfin felt no fear. The pain he felt now at the loss of the Chufeiran trees and the complete annihilation of his people was more to bear, he figured, then even losing his soul.
So, let it be
, he thought.
A fitting end for the one who failed to save his people. Release me Zadok. My heart cannot bear this pain much
longer.

Zadok threw himself into a fit of rage at Gelfin’s indifference to his threats. Channeling all the force he could muster he kicked his twin in the ribs shattering them with an awful snap that gained only a slight groan from Gelfin’s dry lips now mixed with a tiny drop of blood. Zadok was beyond rage now, falling into a stupor of madness that released itself in a fury of repetitive kicks drawing more and more blood from his brother’s mouth until it seemed to gush into a large pool that gathered under his head and saturated the ground. Gelfin’s breathing quickly became labored and shallow as his lungs filled with blood.