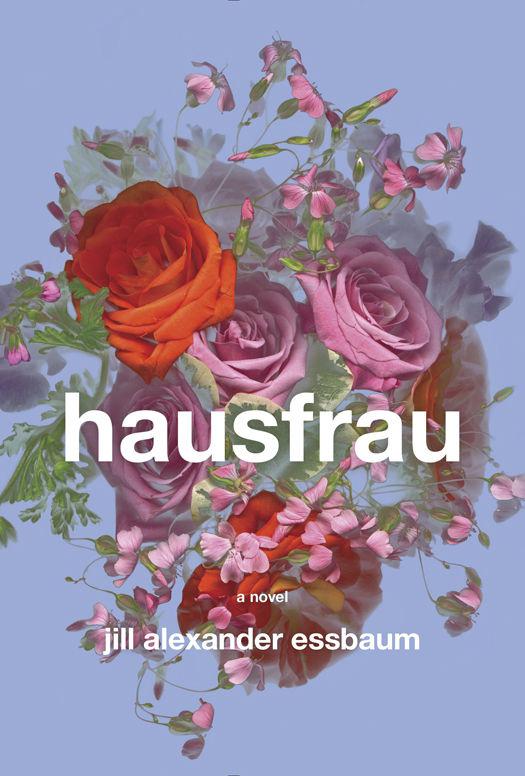 Hausfrau
is a work of fiction. Names, characters, places, and incidents are the product of the author’s imagination or are used fictitiously. Any resemblance to actual events or persons, living or dead, is entirely coincidental.

When the morning skies grow red

And o’er us their radiance shed,

Thou, O Lord, appeareth in their light.

When the Alps glow bright with splendor,

Pray to God, to Him surrender,

For you feel and understand,

For you feel and understand,

That he dwelleth in this land.

That he dwelleth in this land.

Like everything metaphysical the harmony between thought and reality is to be found in the grammar of the language.

A man who has not passed through the inferno of his passions has never overcome them.

Love is a fire. But whether it is going to warm your hearth or burn down your house, you can never tell.

It was mid-afternoon, and the train she rode first wrenched then eased around a bend in the track before it pulled into Bahnhof Dietlikon at thirty-four past the hour, as ever. It’s not just an adage, it’s an absolute fact: Swiss trains run on time. The S8 originated in Pfäffikon, a small town thirty kilometers away. From Pfäffikon, its route sliced upward along the shores of the Zürichsee, through Horgen on the lake’s west bank, through Thalwil, through Kilchberg. Tiny towns in which tiny lives were led. From Pfäffikon, the train made sixteen stops before it reached Dietlikon, the tiny town in which Anna’s own tiny life was led. Thus the ordinary fact of a train schedule modulated Anna’s daily plans. Dietlikon’s bus didn’t run into the city. Taxicabs were expensive and impractical. And while the Benz family owned a car, Anna didn’t drive. She did not have a license.

So her world was tightly circumscribed by the comings and goings of locomotives, by the willingness of Bruno, Anna’s husband, or Ursula, Bruno’s mother, to drive her places unreachable
by bus, and by the engine of her own legs and what distance they could carry her, which was rarely as far as she’d have liked to go.

But Swiss trains really do run on time and Anna managed with minimal hassle. And she liked riding the trains; she found a lulling comfort in the way they rocked side to side as they moved forward.

Edith Hammer, another expatriate, once told Anna that there was only one reason the Swiss trains ever ran late.

“When someone jumps in front of one.”

Frau Doktor Messerli asked Anna if she had ever considered or attempted suicide. “Yes,” Anna admitted to the first question. And to the second, “Define ‘attempt.’ ”

Doktor Messerli was blond, small-bodied, and of an ambiguous but late middle age. She saw clients in an office on Trittligasse, a cobbled, lightly trafficked street just west of Zürich’s art museum. She’d studied medical psychiatry in America but had received her analytic training at the Jung Institute in Küsnacht, a Zürich municipality not less than seven kilometers away. Swiss by birth, Doktor Messerli nonetheless spoke an impeccable, if heavily accented, English. Her
w
’s masqueraded as
v
’s and her vowels were as open and elongated as parabolic arches:
Vhat dooo yooo sink, Anna?
she’d often ask (usually when Anna was least likely to give an honest answer).

There was a television commercial that promoted a well-known language school. In the ad, a novice naval radio operator is shown to his post by his commanding officer. Seconds into his watch the receiver pings. “Mayday! Mayday!” a markedly American voice grates through the speaker. “Can you hear us? We are sinking! We are sinking!” The operator pauses then leans toward his transmitter and replies, quite graciously, “Dis
is dee Germ-ahn Coast Guard.” And then: “Vhat are yooo
sinking
about?”

Anna would invariably shrug a sluggard’s shrug and speak the only words that seemed worth speaking. “I don’t know.”

Except, of course, Anna most always did.

I
T WAS A DRIZZLY
afternoon. Swiss weather is mutable, though rarely extreme in Kanton Zürich, and typically not in September. It
was
September, for Anna’s sons had already returned to school. From the station Anna walked slowly the culpable half kilometer up Dietlikon’s center street, lingering over shop windows, biding small bits of time. All postcoital euphorics had evaporated, and she was left with the reins of ennui, slack in her hand. This wasn’t a feeling she was new to. It was often like this, a languor that dragged and jaded. The optometrist’s on-sale eyeglass display dulled her. She yawned at the
Apotheke
’s pyramid of homeopathic remedies. The bin of discount dishtowels by the SPAR bored her nearly beyond repair.

Boredom, like the trains, carried Anna through her days.

Is that true?
Anna thought.
That can’t be entirely true.
It wasn’t. An hour earlier Anna lay naked, wet and open atop a stranger’s bed in an apartment in Zürich’s Niederdorf district, four stories above the old town’s wending alleys and mortared stone streets upon which kiosks vended doner kebabs and bistros served communal pots of melted Emmental.

What little shame I had before is gone,
she thought.

“I
S THERE A DIFFERENCE
between shame and guilt?” Anna asked.

“Shame is psychic extortion,” Doktor Messerli answered. “Shame lies. Shame a woman and she will believe she is fundamentally wrong, organically delinquent. The only confidence she will have will be in her failures. You will never convince her otherwise.”

I
T WAS ALMOST 3:00
P
.
M
. when Anna reached her sons’ school. Primarschule Dorf was positioned next to the town square between the library and a three-hundred-year-old house. A month earlier on the Swiss national holiday, the square was thick with citizens eating sausages and swaying like drunkards to the live music of a folk band under a sky made bright with fireworks. During army maneuvers, soldiers parked supply trucks in sloppy diagonals next to the square’s central fountain, which on summer days would be filled with splashing, naked children whose mothers sat on nearby benches reading books and eating yogurt. Bruno had finished his reserve duty years earlier. All that was left of the experience was an assault rifle in the basement. As for Anna, she didn’t care for paperbacks and when her sons wanted to swim she took them to the city pool.

That day, the traffic in the square was thin. A trio of women chatted in front of the library. One pushed a stroller, another held a leash at the end of which panted a German shepherd, and a final one simply stood with empty hands. They were mothers waiting on their children and they were younger than Anna by a factor of ten years. They were milky and buoyant in places where Anna felt curdled and sunken. They wore upon their faces, Anna thought, a luminous ease of being, a relaxed comportment, a native glow.

Anna rarely felt at ease inside her skin.
I am tight-faced
and thirty-seven years,
Anna thought.
I am the sum of all my twitches.
One mother tossed her a wave and a genuine, if obligatory, smile.

S
HE
’
D MET THIS STRANGER
in her German class.
But Anna—his cock’s been in your mouth,
she reminded herself.
He’s not really a stranger anymore.
And he wasn’t. He was Archie Sutherland, Scotsman, expatriate, and, like Anna, language student.
Anna Benz, Language Student.
It was Doktor Messerli who had encouraged her to take the German course (and, by a backspin of redoubtable irony, it was Bruno who’d insisted she see a psychotherapist:
I’ve had enough of your fucking misery, Anna. Go fix yourself,
is what he’d said to her). Doktor Messerli then handed Anna a schedule of classes and said, “It’s time you steer yourself into a trajectory that will force you into participating more fully with the world around you.” The Doktor’s affected speech, while condescending, was correct. It was time. It was past time.

By the end of that appointment and with some more pointed cajoling, Anna conceded and agreed to enroll in a beginner’s German class at the Migros Klubschule, the very class she should have taken when, nine years prior, she arrived in Switzerland, tongue-tied, friendless, and already despairing of her lot.

An hour earlier Archie had called to Anna from his kitchen:
Would she take a coffee? A tea? Something to eat? Was there anything she needed? Anything? Anything at all?
Anna dressed cautiously, as if thorns had been sewn into the seams of her clothes.

From the street below, she heard the rising cries of children
returning to school post-lunch and the voices of American sightseers who grumped about the pitch of the hill atop which Zürich’s Grossmünster was built. The cathedral is a heavy building, medieval gray and inimitable, with two symmetric towers that rise flush against the church’s façade and jut high above its vaulted roof like hare’s ears at attention.

“W
HAT
’
S THE DIFFERENCE BETWEEN
a need and a want?”

“A want is desirable, though not essential. A need is something without which you cannot survive.” The Doktor added, “If you cannot live without something, you won’t.”

A
NYTHING AT ALL
?
L
IKE
Doktor Messerli, Archie spoke a magnificently accented English intoned not by the shape-shifting consonants of High Alemannic, but by words that both roiled and wrenched open. Here an undulant
r,
there a queue of vowels rammed into one another like a smithy’s bellows pressed hotly closed. Anna drew herself to men who spoke with accents. It was the lilt of Bruno’s nonnative English that she let slide its thumb, its tongue into the waistband of her panties on their very first date (that, and the Williamsbirnen Schnaps, the pear tinctured eau-de-vie they drank themselves stupid with). In her youth Anna dreamed soft, damp dreams of the men she imagined she would one day love, men who would one day love her. She gave them proper names but indistinct, foreign faces: Michel, the French sculptor with long, clay-caked fingers; Dmitri, the verger of an Orthodox church whose skin smelled of camphor, of rockrose, of sandalwood resin and
myrrh; Guillermo, her lover with matador hands. They were phantom men, girlhood ideations. But she mounted an entire international army of them.

Blue Knickers, A Spanking Short by Rodney C. Johnson
Better with Ben (How to Tame a Heartbreaker Book 3) by McMillin, Casey
Ariel by Jose Enrique Rodo
Shiloh, 1862 by Winston Groom
Laura Jo Phillips by The Katres' Summer: Book 3 of the Soul-Linked Saga
The Constant Heart by Dilly Court
A Touch Mortal by Leah Clifford
Murder in the Rue Chartres by Greg Herren
Inescapable (Talented Saga #7) by Sophie Davis
Walking Dead by Peter Dickinson