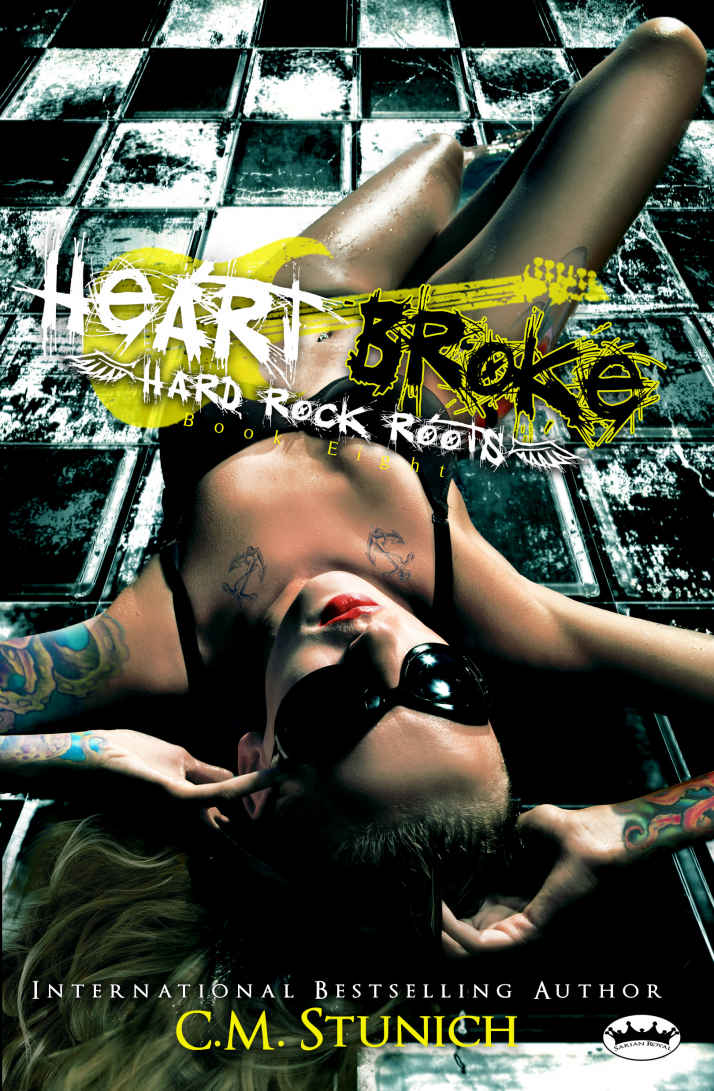 “Having your heart broke ain't easy. Neither is dying. Sometimes it's tough to figure out which might be worse. So, wipe that blood off, stand up, and be heard. Because if you won't listen to the pulse of your own soul or the beat of your own heart, how the fuck do you expect anybody else to?” 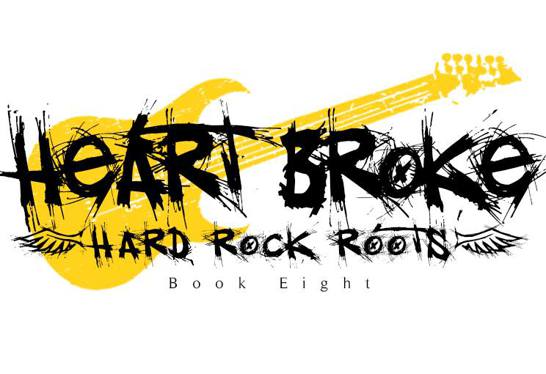 Copyright © C.M. Stunich 2016
All rights reserved. No part of this book may be used or reproduced in any manner whatsoever without written permission except in the case of brief quotations embodied in critical articles or reviews.
For information address Sarian Royal Indie Publishing, 1863 Pioneer Pkwy. E Ste. 203, Springfield, OR 97477-3907.
www.sarianroyal.com
ISBN-10: 1938623835 (eBook)
ISBN-13: 978-1-938623-83-7 (eBook)
Cover art and design © Amanda Carroll and Sarian Royal
"Optimus Princeps" Font © Manfred Klein
"El&Font Gohtic!" Font © Jerome Delage
The characters and events portrayed in this book are fictitious. Any similarity to real persons, living or dead, businesses, or locales is coincidental and is not intended by the author.

sung, spoken, scrawled across the page.
this book is dedicated to free speech and the beauty of the unrestricted word.
(this book is also dedicated to the F-word. thanks for letting me use you. a lot.)

*Author's Note:
Holy shit. This book's been a long time coming, hasn't it? I'm not going to make excuses for that, but I will tell you this:
Heart Broke
is as perfect as I could possibly get it. I stretched myself to the limit to make sure that the
Hard Rock Roots
legacy remained the biggest, baddest rock series around. So rest assured: there's plenty of cursing, plenty of sex, plenty of drugs, and plenty of puking. As promised. Enjoy. And try to find it in your heart to forgive me. This'll be worth the wait. ;) ~CM

There's a body. In a bathtub.

I close my eyes for a moment and press my fingers against my temples.

“Ronnie, why is there a dead rock star in your bathtub?”

“There's
not,
” he says, a cigarette hanging from his mouth, his fingers shoved into his front pockets. “There's a dead poser piece of shit in my bathtub.”

“Not helping,” I say, dropping my hands and opening my eyes to glare at him. “Not even a little.”

“Yeah, well, at this point,” Ronnie says, taking a drag on his smoke, mouth twisted to the side in a wry imitation of a smile, “it's all I got. If I don't start laughing at this shit, I'm going to open my mouth and all that's going to come out is a scream.”

I stare down at Cohen Rose's still form, blood splatters artfully speckled across his stubbled cheeks. I never thought I'd actually
miss
stripping. I mean, taking off your clothes for strangers? Doesn't sound all that appealing under normal circumstances.

Under these circumstances, it sounds downright fucking clutch.

Check this mental list: Beverly Hills mansions, shoot-outs, enough secrets to choke a horse … and a dead guy. In a bathtub. Sounds like a real hoot and a holler, don't it?

She stops pacing and pauses between Ronnie and me.

“But now there's a dead guy in your bathtub,” I repeat again because well, I mean, I can't seem to say it enough. “A dead guy who very likely was murdered …”

“Who
definitely
was murdered,” Ronnie adds, blowing smoke into the quiet early morning air. It's so late it's early and I am tired as
fuck.
My night was a hot mess. Despite my best efforts to get drunk, I barely managed to squeak up to buzzed before sliding right back down to sober again. Can you blame me? Turner was making an ass of himself onstage while Ronnie did the dirty double dance in the back corner and Dax … Dax smoke and drank himself into a barely coherent frenzy.

Let's just say, tonight was a bust and leave it at that.

My morning …
eh,
it's not shaping up to be any better.

“I know I shouldn't have dragged you into this,” Ronnie begins, but I cut him off with a wave of my hand. My boys—Trey, Turner, Ronnie, Jesse, and once upon a time, Travis—they look up to me in some sort of screwed up maternal way. Might as well embrace the role. Going to see Trey in the hospital, sticking around with the guys, this was all supposed to be temporary. Instead, it feels like a never-ending nightmare. My photo shoot? Cancelled. My heart? Broke. That's right. Straight up broke. I keep following Dax around like a puppy, petting his hair back and telling him that everything's going to be okay. I barely even know the guy and I've somehow been sucked into his crap? I knew getting involved with him was a bad idea.
Knew it, knew it, knew it.
And did it anyway. Because I, I am Crazy Sydney.

I cross my arms under my breasts and tilt my head to the side, blonde hair cascading over my shoulder in waves. Cohen looks … peaceful. Despite the blood and the purple bruises on his face and arms, he looks like he's smiling. To put it mildly, the expression is … creepy as fuck.

“Who do you think did this?” I ask, not that I expect Ronnie or Lola knows the answer to that question.

“Well, considering Brayden Ryker was sitting on my bed when we came in, my guess is that he, at the very least, put the body here. As to who actually killed the guy? Did I mention I ran into Paulette Washington at the club.”

“The TV producer?” I ask, wrinkling up my nose as I study Cohen's raggedy denim jacket, his holey jeans, his scuffed black boots. Looking at him like this, I almost feel sorry for the guy. But then I remember how Lola mentioned he used to beat the shit out of her. Karma anyone? “What the hell was she doing at the club? Coincidence?”

“She had blood on her hands,” Ronnie says and my eyebrows go up. Way, way, way up. “Literally I mean, as well as figuratively.”

“Maybe she was just on the rag?” Lola jokes, in a surprisingly chipper mood for somebody who's just found their dead boyfriend in their bathroom. Their swanky new Beverly Hills million dollar bathroom.

The universe really does work in mysterious ways.

“So … Paulette Washington, the super rich and famous TV producer, the woman who sold you this house, she killed Cohen Rose? And that makes sense how?”

“She's also America's sister,” Ronnie adds matter-of-factly, blowing out a puff of smoke with a smile. And then he turns around and walks away.

I should be shocked by his statement.

Not one fucking bit.

“Somebody should write this shit down,” I grumble as I help Ronnie, Jesse, and Lola haul Cohen Rose out of the bathtub and onto the waiting tarp.
Holy crap, this motherfucker is heavy.
We all grunt and curse under our breaths as we drop the frigid corpse onto the blue plastic and stare down at him with wrinkled noses and curled lips. “Like, make a book out of it or something.”

“Like anybody would believe all of this shit? I've seen
Buffy the Vampire Slayer
episodes that were more true to life,” Lola says, wiping her gloved hands on her jeans and curling her lip as she stares down at her former beau. “Trust me, nobody would want to read our story. It's too fucked up.”

“Eh, you're probably right,” I say with a sigh, running my fingers through my hair and then cringing when I realize there's a bit of dry, flaking blood on my glove. “Even if someone wrote this crap down, nobody would buy our story for a second.”

“Um, now what?” Jesse interrupts gruffly, crossing his arms over his chest, face wary and expression guarded. The last thing anyone wants after a night on the town is to … well, to help bury a body. I get it. “Shouldn't we be calling Brayden Ryker or something?”

“No,” Ronnie snaps, short and sharp. His brown eyes are narrowed, focused firmly on the body sprawled across the floor in front of us. “That's exactly what he wants us to do. He's fucking baiting us, and I'm sick and goddamn tired of playing games. No. We've been through worse shit than this before.” He yanks a pack of smokes from his pocket and offers them to the group; nobody turns him down. “If we can handle losing people we love,” Ronnie pauses to take a breath and I know we're all thinking of someone different—Travis, Asuka, Poppet, “then we can handle burying someone we hate.”