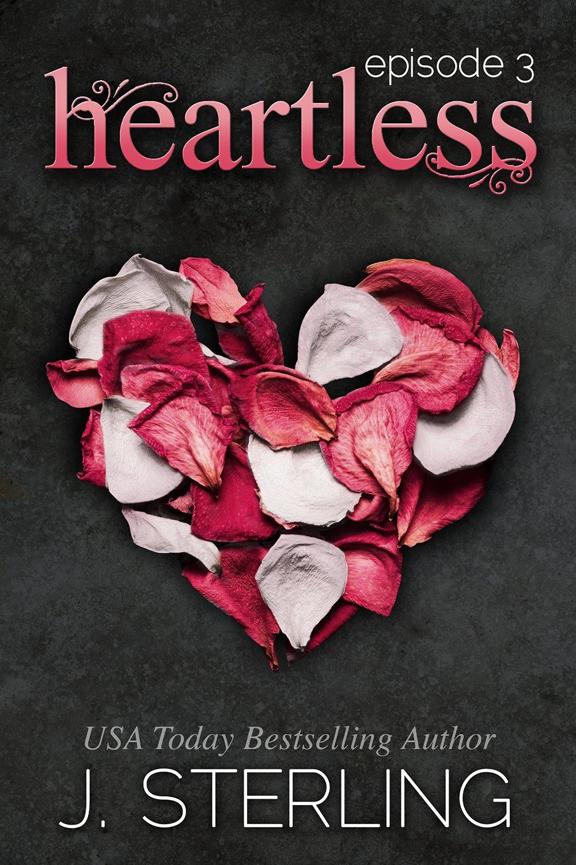 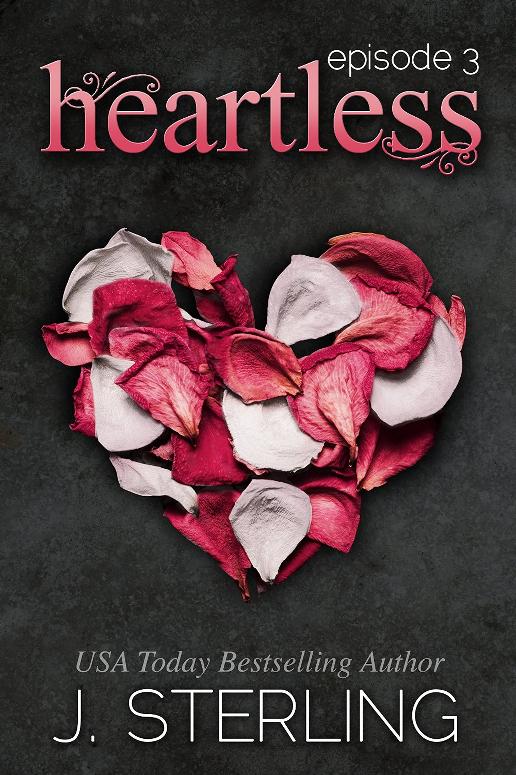 This serial e-book is licensed for your personal enjoyment only. This e-book may not be resold or given away to other people. If you would like to share this book with another person, please purchase an additional copy for each recipient. If you’re reading this book and did not purchase it, or it was not purchased for your use only, then please purchase your own copy. Please do not participate or encourage the piracy of copyrighted materials. Thank you for respecting the hard work of this author.

www.j-sterling.com
to find out where additional versions may be purchased.
TABLE OF CONTENTS

ABOUT THE AUTHOR
SEEING STARS TEASER

OTHER BOOKS BY J. STERLING

I watched as Elizabeth all but ran up the street, the opposite direction from where I was waiting for her.
What the hell was going on?

I started chasing after her, my heart in my fucking throat the whole time as I screamed her name. Ben yelled at me to stop, his footsteps echoing close behind each one of mine.

“Daniel, stop!” he shouted one last time before I felt a pull one my arm. I stopped running and turned to face him, my concern and anger growing.

“What happened? Where is she going?” I growled at Ben.

His grip only tightened, and I gave him one last warning before I completely lost my shit on him.

“What the fuck, Ben? What did you say to her? Let me go before I knock your teeth in.”

He tried to contain me, but I flexed both arms before thrashing them back and then down, forcing his grip to loosen. I shoved him, breaking completely free, and he stumbled before trying to regain his balance. He took a shaky step toward me, and I squeezed my right hand into a fist before clocking him square in the jaw. My knuckles throbbed immediately, but I shook it off.

Ben’s head flew to the side, and he quickly snapped it back to meet my anger-filled gaze. He charged at me, his face seething, but his over-the-top emotions made him an easy opponent. He stepped toward me with his head down, clearly aiming for my chest, like he was a fucking bull. I stopped him mid-stride with a knee to his ribs. A guttural
oomph
sound escaped as he lowered himself to the pavement, his hand now holding onto his stomach area.

“I’ll put you in the fucking ground if you don’t knock it off and tell me what the hell is going on—right now.”

He glanced up, his eyes wincing in pain. “Why are you cheating on my sister?”

That’s what this shit is about?
“I’m not cheating on your sister.”

He made a girlish grunt sound and I fought back the urge to hit him again. “I just saw you with my own eyes, Daniel. What the hell, man?” He pushed up from the ground and rose to his feet.

“I’m not cheating on your sister,” I reiterated. “I ended things with her days ago—right after I met Elizabeth, actually.”

“You broke up with my sister for Elizabeth?”

“Ben, I know this won’t be easy for you to hear,” I paused, knowing that they had a close relationship, “but your sister was never my girlfriend. We were never exclusively dating.”

Ben growled as his hand balled into a fist. I dodged the punch and pinched between his neck and shoulder, bringing him down to the ground again.

“Stop fucking trying to hit me. Be pissed, but I never lied to Kate—ever. She knew what it was the whole time.”

“Which was what? Some sort of booty call that lasted two years?”

“Yes,” I answered honestly. “But she knew that. Damn it, Ben, I’m telling you the truth. She always knew. Right from the start.”

“You had to know that she was in love with you.” He moved to sit down on top of a knee-high brick wall, his hand palming his jaw.

I followed suit. “I swear to you that I didn’t. I would never have guessed it was anything more to her than it was to me.”

“She’s a girl, Daniel. Girls don’t hang around for that long for no reason.”

“You strung her along. She thought she had a future with you. Hell, she wanted to marry you.”

Marry me? What the fuck?

I never alluded to marriage to Kate or any of the other women I’d slept with.

“I never promised her anything of the sort. I am telling you that I was nothing but upfront and honest with her at all times.”

“Who fucks a girl for two years without having feelings for her? Who does that?” he asked out loud, his irritation growing.

He truly wasn’t hearing a thing I’d said. I sucked in a breath and followed my gut.

“Who tells a girl no guy will ever want her because she’s too ambitious?” It was a wild guess, but I knew I was right.

The second Ben had laid eyes on Elizabeth, his face had lit up like a fucking Christmas tree while her face had dropped and then scowled. She hadn’t been happy to see Ben, I sensed that immediately.

“What the hell are you talking about?” He looked up at me, his jaw already bruising.

“Elizabeth,” I simply said her name—one word, one perfect word.

“Oh Christ, Daniel, that was eight years ago. Apparently, she completely got over that. She seems fine. She’s with you, isn’t she?” He waved his arm toward where Elizabeth had once stood.

“No, she’s clearly not with me, and she’s not fine. What did you say to her?”

“I told her that you were dating my sister. I didn’t know any different. I warned her to stay away from you.” He lowered his head and looked at his feet.

“You what? Motherfucker.” I pushed off from the wall and started pacing. “What did you show her on your phone?”

He made a face like he couldn’t remember, and I grabbed him by the collar.

“What did you show her?”

“A picture of you and Kate. Kate sent it to me yesterday after I texted and asked how she was. She said that you two were hanging out, having a great day, and then she sent me the photo.”

“Yesterday? I haven’t seen her in days. Show me.”

I had no idea what kind of game Kate was playing, but she was fucking with my life, and I wouldn’t have it. I watched as Ben pulled up the text from her, and I saw the picture of Kate and me, smiling. It was the day I’d ended things with her. She’d asked if we could take one last selfie together. I’d warned her that I didn’t think it was a good idea, but she’d insisted, and I couldn’t tell her no after her meltdown. My guilt was already eating me up inside. I’d figured there was no harm in one last photo with her
?

“I should hit you again for not minding your own business.”

He raised his hands in surrender. “Sorry. I didn’t know. I honestly didn’t know. Kate’s been lying to us all for years when it came to the two of you.” He grabbed his head as if trying to process it all. “But it all makes sense, like why you didn’t do any holidays with the family. She always made up excuses for you, but now, I get it.”

“Holidays were not a part of the arrangement. That would only confuse things, and I didn’t want there to be any confusion. I wanted to avoid this exact scenario,” I confessed.

“I really screwed things up for you with Elizabeth, huh? Do you want me to call her and apologize?”

“I’m a grown man. I can handle my own shit with Elizabeth. Why don’t you go visit your little sister and make sure she’s okay since she’s obviously not?”

It wasn’t really a request to be honest. My tone demanded that he stay the hell away from Elizabeth and go where he was wanted. Which wasn’t anywhere near my girl.

He stood there, shaking his head like a lost dog. “You’re right. I should go talk to Kate. Sorry again, man.”

I dialed Elizabeth’s cell phone three times, but she sent me to voice mail before the third ring. Calling my driver, I had him take me to her apartment before I headed to the airport. Scanning the list posted next to the front of the door, I found her last name and pressed the small button next to it. The speaker beeped an unholy sound before crackling, and my heart actually fucking leaped into my throat at the idea of her voice coming through the speaker.

The speaker sounded again before clicking, a dial tone replacing the otherwise silent air around me. She had hung up on me before even giving me a chance to speak.

There had to be something I could do. I stood there, racking my brain, as an older woman exited the building with her tiny dog in tow. She smiled at me, and I grinned back.

“Stuck outside, dear?” she asked.

“My girlfriend is pissed at me and won’t let me in. I left my keys upstairs,” I half-lied.

She giggled and eyed the single white rose in my hand. I had picked it up from the ground where Elizabeth had dropped it. “Oh, well, you’d better go make it up to her then.”

She held the door open, and I bolted up the stairs. Thank God the list outside included the apartment number, otherwise I would have had no idea which direction to head.

I reached the fifth floor and pounded on her door. “Elizabeth! Open the door, and talk to me!”

There were no sounds coming from inside, but I knew she had to be in there. When her next-door neighbor opened his door and glared at me, I apologized for being so loud and promised to keep it down.

Knocking again, I lowered my body against her door and waited for a sign, a sound, anything. Thirty minutes passed before I admitted to myself that she wouldn’t see me tonight. Placing the rose in front of her door, I walked away, accepting my current defeat.