Read Helix and the Arrival Online

Helix and the Arrival 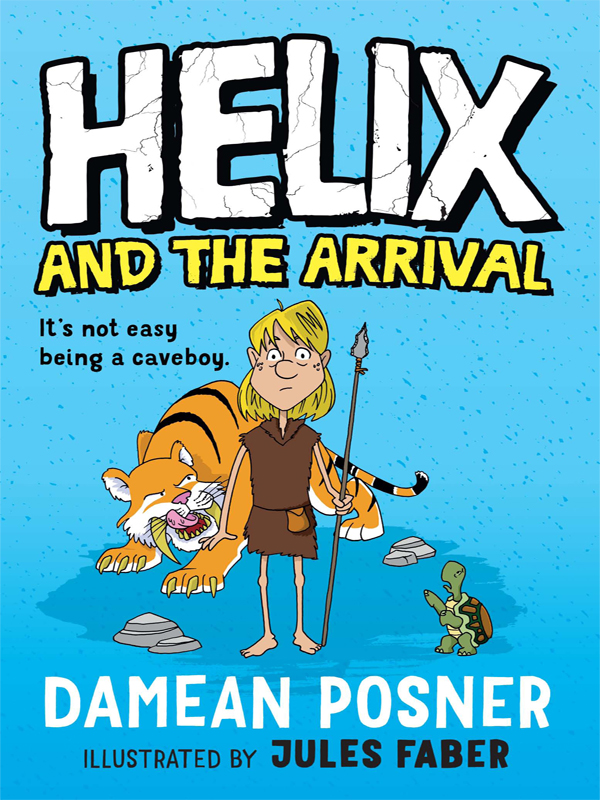 Hi, I'm Helix. I'm twelve years old and the worst caveman-to-be that Rockfall has ever seen. I'm even less cavemanly than my lazy bonehead brother, whose hobby is grooming his nose hair.

It's almost time for my Arrival. I'll be expected to disappear into the woods and return with something big, dangerous or rare â preferably all three. My best friend Ug is preparing for his Arrival too. He has the strength of a hungry rhinovore so will no doubt bring back something impressive.

And our friend Saleeka would pass with flying colours, except girls aren't allowed to take the test â a rule that makes her angrier than a sabre-tooth.

But me? I can't even lift a club above my shoulder. Banishment to the Dark Side, here I come â¦

âLots of twists and turns' CONOR, 12

Chapter 6: A Learning with Speel

Chapter 13: Back to reality

Chapter 14: How do you cross the river?

Chapter 15: The medicine man of the mountain

Chapter 17: The marriage of Sherwin

Chapter 19: The Dark Side awaits

Chapter 20: Steckman and the Dark Side storm

Chapter 23: The Cavern of Pong

Chapter 24: I'd rather be eaten by a claw-gripped fork-tongued vulture

Chapter 25: The flint of Herb

Chapter 26: A last word of advice

Chapter 27: The beginning of the end

Chapter 30: A river to cross

Chapter 32: The past comes back to life

Chapter 35: A trip to open waters

Chapter 41: The meeting of the mountain folk

Chapter 42: Back to the Ledge 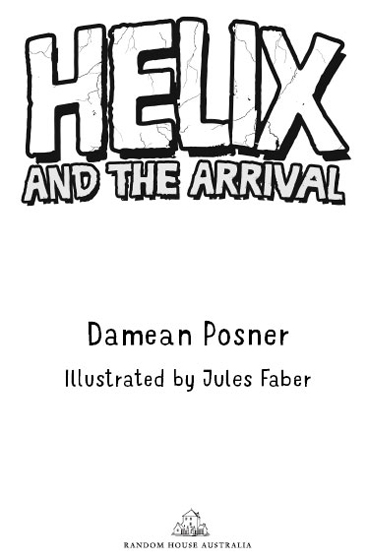 For Mum, Emma and Freya 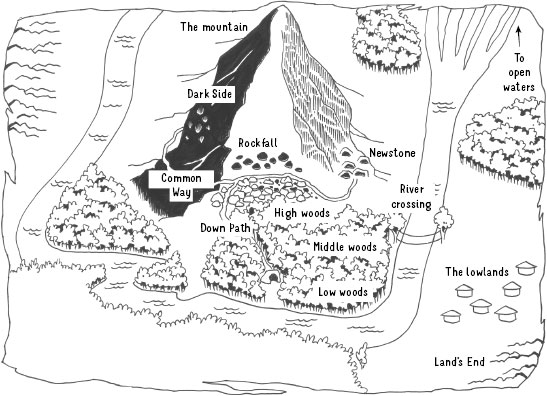 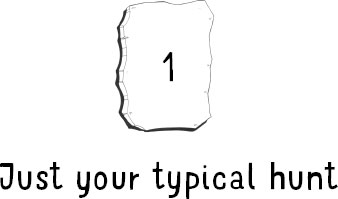 âHurry up!' says my brother Sherwin, from outside our cave. âIf we don't leave soon, the sun will have risen and there'll be nothing left to hunt.'

Sherwin is excited. Way too excited, if you ask me. We're only going on a hunt. Does he think we're going to catch him a wife as well?

Dad is still getting organised, deciding which spear to take, fastening a flint blade to his belt and strapping a water bladder around his waist. He's doing this all at once, so it looks like he's having some sort of inner-body experience that involves an invasion of fire ants under his skin.

âAre you sure you want me to come along?' I ask Dad.

âHelix, we're doing this for you. Your Arrival is coming up. You need to learn how to hunt.'

The water bladder is now dripping water down Dad's leg â he's strapped it on upside down. I point this out.

âDang thing!' says Dad, jumping to avoid the dripping water. As he moves, the flint blade in his belt is dislodged. It lands on his foot. âOuch!' He falls to the ground, gripping his toe and scrunching up his face in pain. I think he's trying his best not to cry.

âDo you need a hand?' says Mum, standing with one hand on her hip, looking down at him.

âWe're all good, thanks, dear. All we need now is to hunt us some beasts,' he says, rubbing his foot some more, then jumping to his feet in a deadly hunter pose (which doesn't really look that deadly).

Mum's still looking at him with one hand on her hip. âJust make sure you take good care of Helix. Don't do anything stupid.'

Dad isn't exactly known for his hunting skills. In Rockfall's Cave of Fame for Great Hunters (if there were such a thing), you wouldn't see a cave painting of Dad next to Borag the Fearsome and Mortung the Slayer. However, if there were a Cave of Shame â¦

One of the veins sticking out of Sherwin's thick forehead looks as if it's about to pop. We'd better leave quickly.

We set off and move up above the caveline. If we were serious hunters, we'd take the Down Path towards the base of the mountain, into the deep woods below the caves.

âWhy are we heading up?' complains Sherwin. âAny half-decent caveman knows that all the large beasts lurk down in the woods.'

âVery good point, son, but there's plenty of good game up here, too,' says Dad, his spindly legs moving from rock to rock, making him look like a hairy-legged spider.

Dad is what I'd call a
selective
hunter. I think he goes by the motto, âWhy hunt something that could swallow you without chewing when there are plenty of small creatures that will fit down your loincloth?'

I look at Dad from the ground up, taking in his bony ankles, his knobbly knees and the ribs poking out of the top of his loincloth. He has a softer face than most cavemen â his brow isn't as thick, and the hair on his head and shoulders is thinner and lighter. His moustache covers much of his face; it looks like a set of bird's wings has landed under his nose.

Sherwin, on the other hand, is built with heavier bones, which he gets from Mum. He has hair growing out of his nostrils and a strong bone-line across his forehead above his eyes. If you asked him, he'd say the bone-line is his finest feature â¦ Not that it's helped him find a wife.

Sherwin is more your typical caveman. If someone were to question him on his ambitions in life, his response would go something like this (and in this order):

grow even more body hair (or, at the very least, enough to make his eyebrows join and become one).

We're well above the caveline now and moving from rock ledge to rock ledge. It's slow going, as we need to be careful not to lose our footing. Beyond the woods below Rockfall, I can see the river, wide and blue. Across the river is the lowlands, where the river people, our enemies, live. 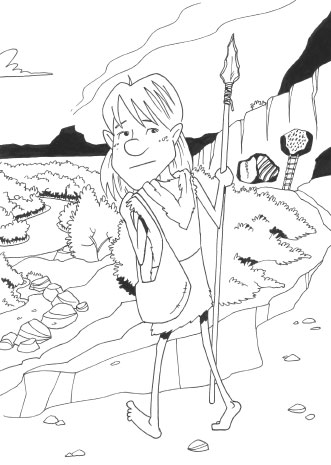 A small raptor glides by and lets out a squawk as if sounding a warning to the rest of the creatures up here: âWatch out for the two skinny cave folk and the big angry one.'

We're high up the mountain, now, and it's not so bad. If this is what hunting's all about, I can deal with it.

We reach a small ledge that juts out from the cliff face. At the back of the ledge is a dark cave that disappears into the mountain.

Sherwin, who would normally still be asleep at this time, is acting all cavemanly today. I think it's because, for once, I'm out hunting with him and he wants to show me up. Good luck! It won't be hard.

âWhat he needs,' says Sherwin, pointing to me, âis to come face to face with something big.'

Um, no I don't, Mr There's-so-much-hair-growing-out-of-my-nose-that-it-looks-like-a-caterpillar-is-hiding-in-each-nostril.

âEr,' I say, âmaybe we can start with something small like a mountain vole â¦'

Sherwin turns to Dad. âYou know what's going to happen? He's going to front up for his Arrival without a clue about how to hunt big game.'

Dad raises his hands to try to calm Sherwin down. âI think you're overreacting, son. All he needs is a bit of practice. Don't you, Helix?' he says to me.

I nod, but who am I kidding? I could have all the practice in the world and I'd still be ranked alongside Dad: equal number one in the Cave of Shame.

âIf he fails his Arrival, we'll all be shamed,' says Sherwin as if he can read my mind, âand I'll never find a wife!'

âSherwin, you're getting all worked up about nothing â¦'

I stop breathing. I should be interested in what they have to say, but something has caught my attention: what belongs to those two green eyes staring out from the dark cave behind us?

In a hushed voice, I say, âDad! Sherwin! Look.' I point towards the cave.

All I can think is: cave lion alert! There aren't many of them around, but this is the type of place they're supposed to live in â caves, dark caves, high up the mountain.

Dad squeaks and jumps backwards so that he's hidden behind Sherwin.

Sherwin slowly picks up his spear and moves into a crouch.

Dad follows Sherwin's lead and goes to pick up his spear as well, but manages to trip over his own feet and bump Sherwin in the backside. They both fall forward, Dad lying on top of Sherwin.

The eyes, still in the dark, move a step forward, then another and another until, just as I suspected, we see a cave lion. Except it's not a cave lion. It's a cave lion cub.

Sherwin looks at Dad, who is still on top of him, and smiles as if to say, âThis will do for our dinner and probably the next dinner or two after that.' They untangle themselves and return to their feet.

The cub blinks its large green eyes again â it's just a baby and doesn't recognise the danger.

And I push him in the side, forcing him off balance. His spear misses the cub and hits the rock wall instead.

The cub runs back into the cave and its green eyes disappear with it.

âYou absolute bonehead!' screams Sherwin, slapping me on the top of my head. âDid you see what he did?' he says to Dad.

As Sherwin rants and rages to Dad, complaining about how my life will never amount to anything, something else in the cave catches my attention. It's the two green eyes again â they're moving forward in the dark. They're the same colour green as before, except there's
something different about them this time: they're much bigger. The eyes â and the body attached to them â reveal themselves in the light. Unless the cub has grown ten times its size in the last moment, I'd say this is the cub's mother â its angry mother.

The cave lion mother lets out an almighty roar as if to say, âWho's the bozo who took a shot at my baby?'

Hearing the roar, Dad decides to show great leadership and run. I follow, with Sherwin next, and the cave lion last. I'm reminded of an old caveman saying that goes something like this: âBeing chased by a beast is fine as long as you are not the slowest runner.'

We scramble down the cliff face away from the lion, which follows us, roaring. Dad tumble-runs most of the way, so I find it hard to keep up with him. Sherwin,
being bigger than both of us, is slower. Gee, it was good of him to volunteer to go last as our cave lion shield.

We're nearing the caveline now. Freedom isn't far away. The beast, surely, won't follow us all the way down into Rockfall â¦

Humph
,
ergh
,
pftt
,
owser!
Dad, in front of me, is now doing more tumbling than running. But we're
almost safe. We reach the bottom, where we began climbing, and thump into the hard ground. I look behind me and see Sherwin still scrambling down the mountain, the cave lion almost on top of him. She takes a swipe at him and he arches his back, narrowly escaping being sliced by her claws.

âOne more ledge and then you're free!' I yell to him.

But with a swift leap, the lion clears a number of boulders, landing within swiping distance of Sherwin.

I hear a
whoosh
sound, followed by a painful wail. 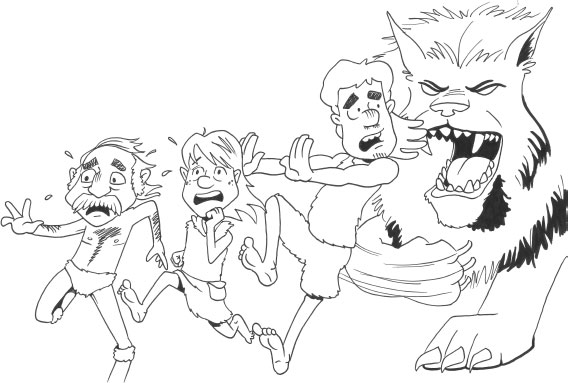 Bourne 4 - The Bourne Legacy by Robert Ludlum, Eric Van Lustbader
A Torment of Savages (The Reanimation Files Book 4) by A. J. Locke
My Masters' Nightmare Season 1, Episode 2 Discovered by Marita A. Hansen
Living in Harmony by Mary Ellis
The Rose Garden by Susanna Kearsley
Fixated On You (Torn Series #5) by Ann, Pamela
Shattered Promises 02 - Fractured Souls by Jessica Sorensen
Aspens Vamp by Jinni James
Fight For Her (Soldiers in Arms Book 1) by J.A. Bailey, Phoenix James
The Burnouts by Lex Thomas