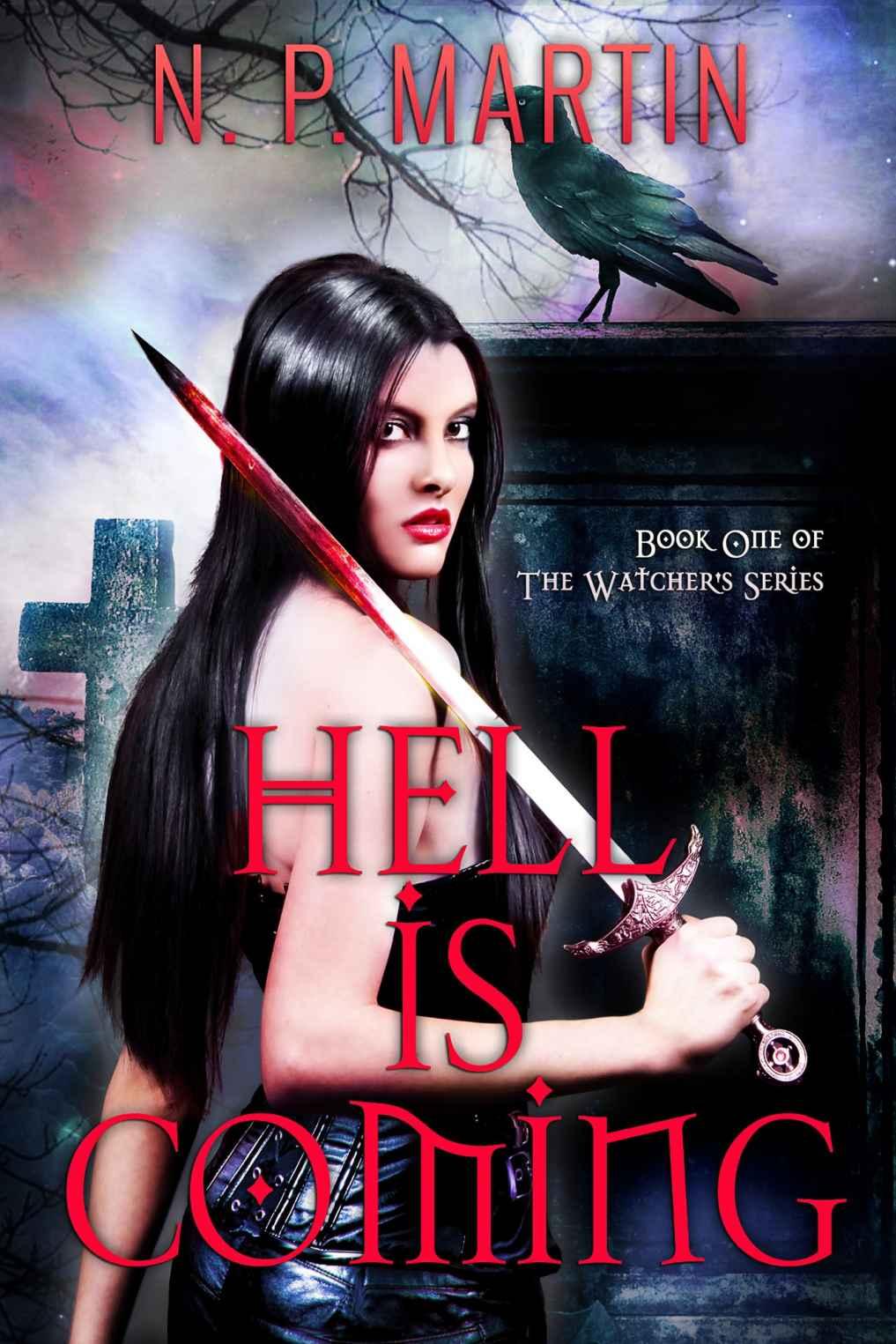 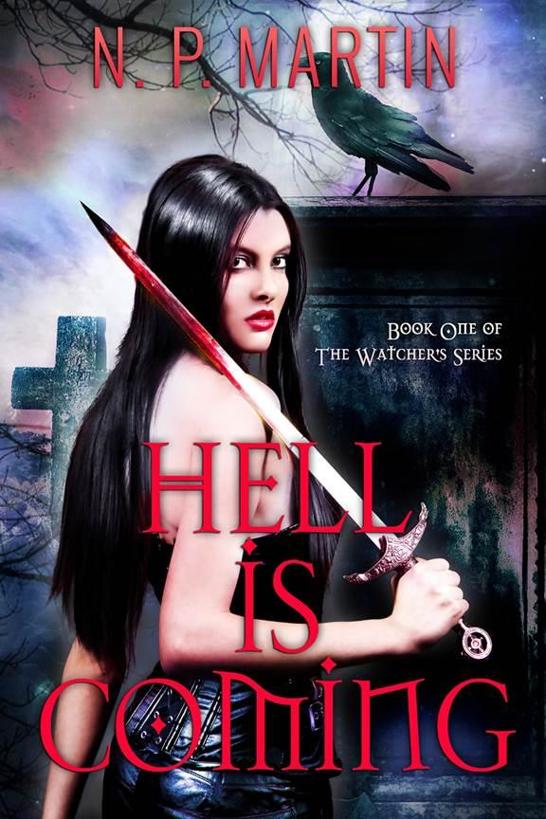 This book or any portion thereof

without the express written permission of the publisher

“Hell is empty and all the devils are here.”

Weirdness has followed me my whole life so it was no surprise when I started seeing monsters.

I’m eighteen—not a scared little kid anymore. Countless foster homes have since knocked that out of me. As for being mentally unhinged—well I don’t think I’m any more disturbed than any other person my age.

Not all the time anyway.

I was pretty sane at the time I started to see the demons. Actually, I was the sanest I had ever been in my life. I was fast becoming a “normal” member of society. My unhealthy obsessions and behavior had been put aside (mostly), and I was focusing on being a good girl—you know, one who doesn’t spend all her time messed up on prescription meds indulging a morbid preoccupation with the occult and paranormal.

I was ready to move on with my life, to finally start afresh.

That’s just something a girl can’t ignore, especially given my family history.

It was a cold and dull October afternoon in Mercy City and I sat in my twin brother Josh’s black 1969 Mustang, the car he bought for his eighteenth birthday. He felt he deserved it, being a hardworking entrepreneur and all—a weed dealer, but just until he turned pro at MMA, which according to him wasn’t far off.

Whatever. It didn’t bother me.

“So this apartment,” I said as Josh drove us through congested, noisy streets. “I can’t wait to move in. It feels like we’re getting out of jail after so long.”

“Yep, it’s gonna be cool,” Josh said, nodding his head slowly. “As long as you don’t bring all that occult shit with you. I don’t want that stuff in there.”

I took mock offence at that. “What occult shit? You know full well I’ve left all that behind me.”
Sort of.

“You still have all those creepy fucking books lying around Diane’s place. It baffles me why you read that shit, Leia. It’s just nonsense.”

Diane was our foster mother. We’d been staying with her for the last year. She was a regular angel compared to most of the foster moms we’d been lumbered with in the past. I credited her with helping me get my act together. It was her idea that I apply to art college, which I did, something I never thought I’d accomplish. Diane was good that way. As a high school teacher, bringing out the best in people was kind of her thing. “I don’t even read those things anymore. I keep meaning to get rid of them.”

Not quite true. Maybe before the demons appeared. Not now.

“So why don’t you?” Josh asked. “I thought we agreed you’d put all that shit behind you, start over.”

“And I did—Jeez Josh, gimme a break. It wasn’t easy for me to let all that go.”

Had I really let it all go though?

More or less. It was hard mainly because I never found answers to the boatload of questions that still haunted me over what happened to our parents. Now that my life had taken a dark turn, it was even harder for me to stay in the light where Josh and Diane wanted me. It was starting to feel like I would never escape the darkness.

“I’m not saying it was, but you know my views on it all.”

I did. Josh didn’t share my opinion that some kind of demon killed our dad and took our half-dead mom God knows where. Josh didn’t know what he believed about that night eleven years ago, but it sure as hell wasn’t what I believed. He seemed content to let the events of that night remain ambiguous, mainly because he wasn’t there when it happened. In his mind, our parents were dead and there was nothing he could do about it. I wish I shared his outlook, but I didn’t, not by a long shot. “I get it, you’re concerned,” I said. “I’ll get rid of all the books, don’t worry.”

“And the rest of the shit,” Josh said. “The black candles, whatever weird crap you have in those jars. All of it.”

The spell ingredients
.
Not that the spells worked
.

I couldn’t blame him for being so adamant. My foray into the dark side took its toll on me. It led me down some scary paths that ended in drug addiction and a mind that wasn’t exactly healthy by most peoples’ standards. Part of that was due to not finding any answers to the questions that niggled away at my brain like tiny, annoying worms. The pills I took were the only things that put the worms to sleep for a while.

I looked out the window at the downtown crowds. People in impeccable business suits were rushing around carrying leather brief cases, smart phones, and expensive cups of coffee. My eyes gravitated towards a face in the crowd for no apparent reason—a man in his thirties, tanned and flawlessly groomed in a light gray suit was what my eyes settled on. He was just another businessman, probably on his way to some important meeting, but the fact that I picked him out of the crowd told me there was more to him. Sure enough, as I stared at the man, his tanned face began to flicker like a dodgy digital image as it changed into something inhuman.

His eyes started to glow a deep red, his skin changed to a dark green color, taking on a scaly, reptilian appearance. Three thick twisted horns curved back over his skull like bony cornrows. The businessman’s face stayed that way for a few seconds while he spoke on his cell phone, then his features flickered and became human again.

I looked away, unfazed. Just one of half a dozen other similar faces I saw that day.

Nothing to see here folks, just another demon face in the crowd.

A couple of months ago when I saw my first demon, I wasn’t so blasé about it. It happened on the last day of high school while I sat in the assembly hall with hundreds of other students listening to the school principal give a speech on the importance of planning for the future. I was barely listening to him when his face changed as he stood on the stage. It’s disconcerting to say the least when the principal of your high school suddenly grows horns out of his head and continues to talk even though his face has turned scarlet and his mouth is filled with nasty looking pointed teeth. It was all I could do not to run from the assembly hall as the head masters burning yellow eyes seemed to pick me out of the crowd, boring into me as he spoke of making the most of our talents in a digital age. I only realized I was taking a panic attack when the guy next to me asked if I was alright. That was the start of it. The principal’s demon face haunted me until I saw another person transform the next day.

That’s when I knew something was really up and that true evil had made its presence felt in my life for the second time.

“What are you staring at?” Josh was eyeing me weirdly, a look with which I was well familiar.

“Nothing.” I tried to sound casual, despite knowing he could see right through me most of the time.

“You’ve been off lately.” He gave me his brotherly look of concern. “You’re not on those pills again, are you? I could do without you having another overdose.”

If anyone else had said that to me, I would have punched them straight in the face. Since it was Josh, I let it slide. He was the one who found me a year ago, unconscious from too many prescription pills and too much vodka. He took me to the hospital where I had my stomach pumped. It scared him. Scared me too.  I didn’t blame him for still being edgy, which is why I kept my anger down. “I’m still clean, you know that—apart from the weed. My self medicating is all natural these days.” I  thumped him lightly on the arm. “Anyway, you’re one to talk. Don’t think I haven’t noticed you’ve been off lately yourself.”

We drove past the old and massive city hall building, with its domed roof and scary looking gargoyles that seemed to stand guard above the main entrance. I couldn’t help but stare at them as we passed by, wondering if they were based on real demons. Their faces looked uncomfortably like the demon faces I saw every day. The people rushing in and out of the building didn’t seem to notice the fierce stone expressions looking down on them though.

I turned my attention back to Josh. Try as he might, he couldn’t hide the fact that something was up. I could always see through his tough guy exterior.

Did he see the demon faces as well?

A few days ago I caught him staring at some random guy walking down the street. I looked and the guy had the demon face, but different, as they all were. This guy had muddy gray skin streaked with brown and huge jaws not unlike the Predator from those movies. Despite looking freaked, Josh said there was nothing wrong. I let it go, but I knew my brother. Something was up.

“It’s just the Roids,” he said. His voice was quiet, too casual. It was the voice he used when he expected judgment from me.

“Hey, no one ever got to the top without taking something. All the pros at my gym take them.”

“But you’re kickin’ ass without them.”

“Maybe, but if I wanna turn pro I gotta be better.” He slowed the car for a red light. “Besides, it’s temporary, just till I bulk up a bit more.”