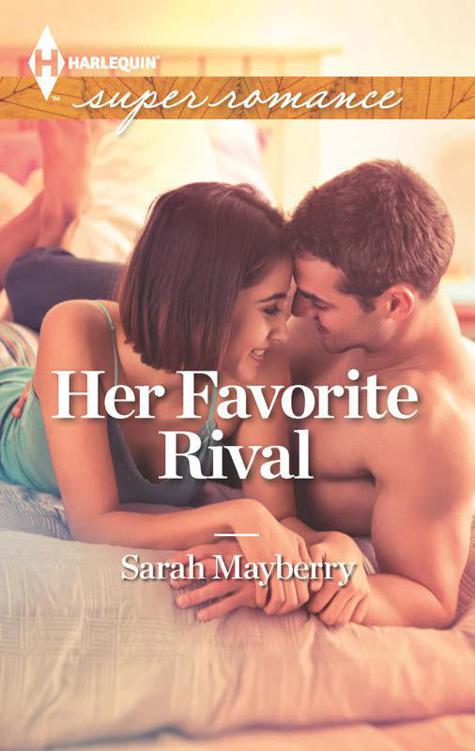 A new meaning for office politics

Audrey Mathews has worked hard to get here. Now she’s up for a promotion and nothing will stand in her way—including Zach Black. He’s hot, smart
and
the competition. When they’re assigned to the same project, she’s shocked at how much she actually likes about him…and how much she misjudged him.

Before long Audrey is seriously falling for Zach—and indulging in an affair that’s against company policy. And the stakes rise when it’s clear only one of them can get ahead. So where do they draw the line between competition and love? Especially when she doesn’t want to lose either the promotion or the guy….

“You enjoy laughing at me, don’t you?”

That wasn’t what Audrey had intended to say to Zach at all. But it was too late to retract her words.

“Why would I want to laugh at you?” he asked.

Because he thought he was better than her. Because it was the way of handsome, entitled, arrogant men to be amused by lessor beings.

But she wasn’t about to say either of those things out loud. She wouldn’t give him the satisfaction. Instead, she braved through with the most obvious—and innocuous—response.

“Because you always smile when you see me.”

His eyebrows shot up, as though she’d astonished him. “Did it ever occur to you that maybe—crazy idea—I might actually enjoy your company?”

It was her turn to be astonished. They’d spent so little time together it was impossible for him to enjoy her company. “No. You and I come from very different places in the world.”

He stared at her. Up close, his eyes appeared almost gray instead of dark blue. The gunmetal color of the ocean before a storm.

“You know what?” he said slowly. “I’m going to take that as a compliment.”

In our household, this book will forever be known as The Lost Book. See, just as I hit Save at around the 70,000 word mark, my hard drive died. And I hadn’t backed up in quite a while. As you can imagine, there were tears and wailing and banging of heads against hard surfaces. Then I calmed down and found a data recovery company who worked magic and salvaged my book.

It took them three weeks to accomplish the miracle and I lived in hope the entire time. I also thought about Audrey and Zach’s story. A lot. By the time I got the manuscript back, I knew I had to sacrifice almost a third of my word count to take the story in a new direction. But I did it, because I was confident I knew Audrey and Zach by then and I knew what their story needed to be.

As you can imagine, writing this one has been a bit of an obstacle course, but I was desperate for these two slightly damaged souls to understand they needed to be together, so I hung in there. I hope the effort was worth it and you enjoy Zach and Audrey’s story.

Sarah Mayberry lives by the sea near Melbourne, Australia, with her husband and a small black cavoodle called Max. She is currently enjoying her recently renovated house—complete with gorgeous new kitchen!—and feeling guilty about her overgrown garden. When she’s not writing, she can be found reading, cooking, gardening, shoe shopping and enjoying a laugh with friends and family. Oh, and sleeping. She is inordinately fond of a “nana nap.”

Where to start with all the thanks?

My brother, for holding my hand through the initial crisis.

All my fabulous writing friends who texted or tweeted or emailed to let me know this had happened to them and to hang in there and hope, with a particular nod to the fabulous Anna Campbell.

My editor, Wanda, for being so damn unflappable and positive and believing, as always, in me.

And Chris, for your wonderful calm and for making me laugh when I didn’t think I could and for all the ferrying to and fro of computer bits... You are, indeed, the shiz, my love.

Last, but not least, to Max, for all the licks and snuffles and walks and cuddles. Whatever did we do without you?

I
T
WAS
STILL
dark when Audrey Mathews used her swipe card to enter Makers Hardware Cooperative’s headquarters on the southern outskirts of Melbourne. Her new shoes pinched her feet as she made her way to her office, but she figured the pain was worth it. The new CEO, Henry Whitman, started today, and she wanted to look sleek and professional and sharp when she met him. She wanted him to take one look at her and know she was up for anything he might throw at her—including a promotion.

Hence her best suit and new shoes and sleek updo.

Her stomach did a slow roll as she remembered the profile on Whitman she’d read over the weekend. She was a big believer in being prepared, and she’d dug up a bunch of old
Business Review
Weekly
articles on her new boss. To an article, they described him as ruthless, hard-nosed and utterly unsentimental; a man who habitually cut companies to the bone to produce results. One article had even reported that his employees referred to him as the Executioner.

Formidable stuff. But she figured if he was so focused on results, he would appreciate someone who was goal-oriented and hardworking and ambitious.

Because even though she was prepared to do her damnedest to prove herself—including waking up at the crack of dawn to make a positive first impression—if Whitman ran true to form, there were going to be a lot of retrenchments in the next weeks and months, and there was a chance she might be one of them. Which was why she’d updated her résumé this weekend, too.

She might be an optimist, but she wasn’t stupid.

She checked her watch. One of the articles she’d read claimed Henry Whitman started work at six-thirty every day, without fail. Which meant he should be arriving any second now.

She gathered an armful of papers and strode toward reception. No matter where he entered, Whitman had to pass through the foyer to get to the executive offices, and she planned on being very visible when he did so.

She felt more than a little foolish as she took up a position to the rear of the foyer. For all she knew, Henry Whitman might not even register her when he arrived. Or maybe he’d see right through her ploy and mark her down as a horrible little suck-up.

She glanced over her shoulder, wondering if she should give up on this crazy idea, go back to her desk and use her early start to put a dent in her workload instead of trying to manipulate events.

She wavered for a moment, but something inside wouldn’t let her back away from her plan to be noticed. Probably it was the same something that kept her at her desk many nights when most of her colleagues had gone home. If she had to try to distill it down to its component parts, she guessed it would be one part making up for lost time and two parts sheer grit and determination to carve out a useful, productive niche for herself in the world.

She might not be a doctor or a lawyer, but she was damned good at what she did, and that counted for something. Well, it did with her, anyway.

The sound of the door from the underground parking garage opening and closing echoed up the corridor. Lifting her chin, Audrey tightened her grip on her papers and stepped briskly into the foyer, trying to look as though she was on her way somewhere vital and important and urgent.

She pulled up short when she caught sight of the tall, broad-shouldered man striding toward her.

Not Henry Whitman, but Zach Black, fellow buyer and all-around thorn in her side. Why was she not surprised
he
was here ready to grease up to the new head honcho? The man oozed ambition; it was a miracle he hadn’t set up camp outside Whitman’s office in order to get a jump on everyone else.

She ignored the little voice that pointed out she was here to do exactly the same thing and cocked an eyebrow. There was the smallest of hitches in Zach’s stride as he saw her, then his mouth settled into the familiar, amused curve he always wore around her. As usual, he looked ridiculously, almost offensively handsome in a charcoal pinstriped suit, his pink-and-white checked shirt and pale gray tie managing to somehow straddle the fine line between professional and stylish.

“Mathews. You pulling an all-nighter or something?” he asked as he joined her.

“You read the
Business Review Weekly
article, didn’t you?” she guessed.

She fought the urge to squirm. So what if she’d put her best foot forward—literally—today of all days? It wasn’t a crime to be keen to impress your new boss.

“You had your hair cut,” she pointed out.

She arched an eyebrow again. Who was he kidding? Like her, he’d clearly come prepared to smooch maximum butt this morning.

“Is he here yet?” he asked, glancing over her shoulder in the direction of the CEO’s office.

“Talking to some of the key suppliers.”

A lock of almost-black hair flopped over his forehead, lending his good looks a more approachable, boyish appeal. An illusion, of course. Zach was a shark in a suit. He’d been recruited to Makers six months ago, bringing with him a reputation as a wunderkind who’d gone to the right schools and rocketed his way up the corporate ladder at light speed. She’d recognized him as her only real competition for the next category manager’s job that came up the moment she laid eyes on him, and time had done nothing to prove her instincts wrong.

Zach checked his watch again. “Might as well get some work done, I guess.”

She watched as he walked away, her gaze gravitating to the firm muscles of his backside. She had a running bet with her friend Megan that he had his suits specially tailored to flatter his rear. That was the only explanation for how good his butt looked and why he was universally known as the Man With the Golden Ass among the women in the building.

Good thing she was more of a leg woman.

She returned to her own office, frustrated that her grand plan had gone astray—and that she wasn’t the only one who’d had the genius idea of ambushing the new CEO.

Gift of Wonder by Lenora Worth
Rainbow Blues by KC Burn
Unsound: A Horizons Book by Summers, Ashley
COWBOY ROMANCE: Justin (Western Contemporary Alpha Male Bride Romance) (The Steele Brothers Book 1) by Amanda Boone, Amber Duval
The Billionaire's Will by Talbott, Marti
Tales From the Tower of London by Donnelly, Mark P.
The Home Girls by Olga Masters
The Far Horizon by Gretta Curran Browne
Swish by Marian Tee
Like the Singing Coming off the Drums by Sonia Sanchez