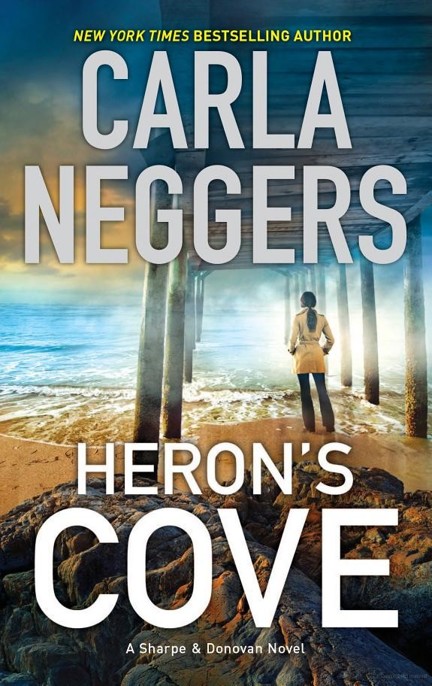 New York Times
bestselling author
Carla Neggers
returns with a gripping story of romantic suspense, where FBI agents Sharpe and Donovan must decide whether working alone or standing together is the only way to outwit an enemy set to tear them apart.

When your safety depends on living a lie…
After escaping certain death, deep-cover agent Colin Donovan is back home on the Maine coast with his new love, FBI art crimes expert Emma Sharpe. Then Tatiana Pavlova, a London-based jewelry designer, arrives in Heron’s Cove, asking for Emma’s help—a prized collection from a lost era of Russian opulence, decadence and rare beauty has resurfaced, and Tatiana warns Emma it’s about to be stolen again. And Colin realizes his nightmare isn’t over. It’s just begun.

And everyone you love is a target...

Emma guards her past closely, and Colin is determined to unlock her secrets. As they investigate the mysterious collection and the equally mysterious Tatiana, they confront their greatest challenge. Now they must count on their expertise—and each other—to outwit an enemy who wants to destroy them and everyone they love most.

Who can you afford to trust?

WITH THREE DONOVAN brothers and an Irish priest watching her, Emma Sharpe choked back her sample of the smoky single-malt Scotch—her sixth and last tasting of the night. “Intense,” she said, managing not to slam the tulip-shaped nosing glass on the table and grab the pitcher of water.
Give it a few seconds.
She was an FBI agent, after all. Tough as nails. She smiled at the four men. “People pay to drink this one, huh?”

“Dearly,” Finian Bracken, the Irish priest, said. “You’re not one for a heavily peated whiskey, I see.”

Emma tried to distinguish the other flavors of the sample—spices, fruits, whatever—but only tasted the peat. “I don’t know if I’m one for a lightly peated whiskey, either.”

A cold wind penetrated Hurley’s thin walls and sprayed the old windows with salt water and rain. The restaurant, a fixture on the Rock Point harbor, was basically a shack that jutted out over the water. Now only a few lights penetrated the dark night and fog. Finian had organized the impromptu tasting, setting up on a back table away from what few diners were there on a windy, rainy late-October Friday. He and Michael, Andy and Kevin Donovan were already gathered over a half-dozen bottles of high-end whiskey when Emma had arrived in southern Maine an hour ago, up from Boston and her job with a small, specialized FBI unit.

Only Colin, the second-born Donovan, wasn’t in Rock Point. Mike was a Maine guide, Andy a lobsterman and Kevin a state marine patrol officer, but, like Emma, Colin was an FBI agent.

She specialized in art crimes. Colin was a deep-cover agent. He’d left his hometown a month ago, pretending to return to FBI headquarters in Washington. The true nature of his work was known to only a few even within the FBI, but his brothers had guessed that he didn’t sit at a desk. Initially he’d kept in touch at least intermittently with his family and friends—and Emma—but for the past three weeks, no one had heard from him.

The silence was far too long, not just for his family and friends but for the FBI.

She felt the draft at her feet. She had come prepared for the conditions, dressed in jeans, black merino wool sweater, raincoat, wool socks and Frye boots. The Donovans were in a mix of flannel, canvas and denim, no sign they even noticed the cold and the damp. Finian had opted against his usual black suit and Roman collar and instead wore a dark gray Irish-knit sweater and black corduroy trousers. He was a sharp-featured, handsome Irishman in his late thirties who had arrived in the small Maine fishing village in June. He had run into Colin, home for a few days in the midst of a difficult, dangerous mission, and they quickly became unexpected friends.

Emma hadn’t met Colin until September. She suspected his friendship with the Irish priest was less of a mystery to her than to his brothers. Finian Bracken was a fish out of water in Rock Point. He had no history with the town and little familiarity with the FBI. He also had a ready Irish wit, and he knew whiskey. He was objective, intelligent, tolerant—a safe friend for a federal agent with secrets.

Andy Donovan held his small glass to the light and examined the Scotch’s deep caramel color, then swirled it and brought it to his nose. He raised his eyes—the same shade of gray as Colin’s—to Finian. “Do you want me to tell you what I smell?”

“If you like,” Finian said. “Just sniff. Don’t inhale deeply. It’s not a yoga class.”

“As if you’d ever find one of us in a yoga class,” Andy said, then shrugged. “It smells like peat.”

Finian observed him with interest. “What else? Do you smell spices, fruit—chocolate, maybe?”

“Nope. It smells like an expensive Scotch to me.”

“Have a taste, then,” the priest said with a sigh, his Irish Kerry accent more pronounced than usual.

“No problem.” Andy tossed back the Scotch and made a face. “I’m with Emma. Too smoky for me.”

It was the final whiskey of the evening. The Donovan brothers hadn’t left so much as a drop in any of the specially designed glasses, one for each whiskey. The glasses all had little hats, like Scottish tams, that concentrated the aromas of each sample. Finian had brought them from the rectory; Hurley’s didn’t have whiskey nosing glasses. Before turning to the priesthood six years ago, Finian and his twin brother, Declan, had founded and operated Bracken Distillers on the southwest Irish coast. Bracken 15 year old, an award-winning single malt and rare peated Irish whiskey, was one of the night’s offerings—or “expressions,” as Finian called his lineup of bottles.

Emma noticed Mike, the eldest Donovan, eyeing her from across the round table. He was down from the remote Bold Coast where he worked as an independent wilderness guide. “Special Agent Sharpe’s a wine drinker. Aren’t you, Emma?”

She couldn’t detect any hint of criticism or sarcasm in his tone, but he still was looking at her as if she had done something wrong. “I like wine.” She kept any defensiveness out of her voice. “How about you, Mike? Do you pack a nice Central Coast red in your canoe when you take tourists on moose-sighting excursions?”

Kevin and Andy both grinned. Mike ignored them and settled back in his chair. “I took a couple out on the river in August. They had a wicker picnic hamper stocked with real wineglasses, cloth napkins, silver cutlery, French cheese, a baguette, apples and pears and two bottles of fancy wine.”

“Must have weighed down the canoe,” Kevin, the marine patrol officer, said.

“Oh, yeah. They insisted on having a picnic on the riverbank but they didn’t count on Maine mosquitoes. They lasted three minutes before we had to throw everything back in the canoe. We paddled straight back to their car.”

“Don’t tell me,” Andy said, amused. “The next stop on their Maine tour was Heron’s Cove.”

“Couldn’t wait to get there. I’m sure they enjoyed the quaint shops and fancy restaurants.”

“Everyone does,” Emma said.

“I don’t care.” Mike raised his as-yet untouched glass of the heavily peated Scotch; his eyes were lighter than those of his three younger brothers but no less intense.
“Sláinte.”

Finian winked at Emma but said nothing. She reached for the Inish Turk Beg, a clear, triple-distilled whiskey from an independent distillery on a small island off the west coast of Ireland. She splashed a little into a fresh glass, set down the distinctive tilted bottle, then held up her glass to Mike.
“Sláinte.”

He swallowed the Scotch and she sipped the Inish Turk Beg, one of Finian’s favorites. He had explained that it was gentle on the palate, clean and fresh on the nose, with fruity aromas, flavors of apple and orange zest and a dry finish. Emma wasn’t discriminating enough to go much beyond whether she could get a taste down with or without choking.

“Colin would have enjoyed tonight,” said his eldest brother, still watching her.

“Are you and your FBI friends any closer to finding him?”

Her head spun and she wished she had skipped the extra taste of the Inish Turk Beg. “I can’t discuss your brother’s work with you.”

Andy and Kevin were as serious now as Mike was. Even Kevin, a law enforcement officer himself, didn’t have any information on his older brother’s work as one of the FBI’s most valuable ghosts. Emma had only a few details on his latest mission herself. It wasn’t as if Colin couldn’t handle himself in a dangerous situation. He was bold, aggressive and tough.

He was also sexy, she thought.

She kept that assessment to herself. “I’m sorry. I don’t know why Colin hasn’t been in touch.”

“He’s not a desk jockey in Washington.” Mike got up abruptly, grabbed his jacket off the back of his chair. “You don’t have to confirm or deny. We all know. He’s always stuck his nose in dangerous situations. Even as kids, he’d be the one jumping into cold water and waves, chasing sharks. It’s his way.”

“I understand that,” Emma said.

She didn’t respond at once. Aware of the four men watching her, she picked up one of the tiny tam-style hats and set it atop a glass. “Maybe Colin and I have more in common than you realize.”

Cat and Mouse by William Campbell Gault
Dangerous Games: The Uses and Abuses of History by Margaret MacMillan
Heat and Dust by Ruth Prawer Jhabvala
Warriors: Power of Three 01 - The Sight by Erin Hunter
Torn by C.J. Fallowfield
The Christopher Killer by Alane Ferguson
The Coldest War by Ian Tregillis
The Crane Pavilion by I. J. Parker
Suddenly, a Knock on the Door: Stories by Etgar Keret, Nathan Englander, Miriam Shlesinger, Sondra Silverston
Grey by Jon Armstrong