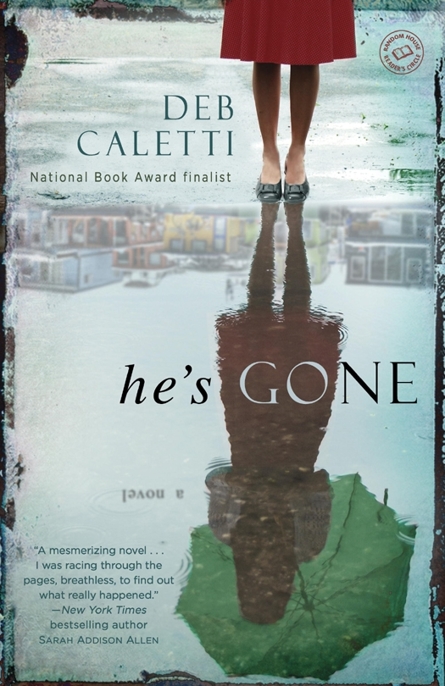 He’s Gone
is a work of fiction. Names, places, and incidents either are a product of the author’s imagination or are used fictitiously.

—VLADIMIR NABOKOV, 1951 CORNELL LECTURE ON
THE METAMORPHOSIS AND DR. JEKYLL AND MR. HYDE

I used to imagine it sometimes, what would happen if one day I just didn’t come home. Not that I ever considered running off—I could never actually do that, even if I occasionally had that fantasy about driving south and checking in to some hotel. Someplace with bathrobes, for sure. I love those. But, no, the thought was less about escape and more about some cruel intervention of fate. What if, say, the clichéd bus hit me as I crossed the clichéd street? The Mack truck. Whatever it was, something terrible would happen and my family would have to return home to find all the daily pieces of my interrupted life. My husband would see my cup of coffee, half finished, a curve of my lipstick on the brim. My mother would see my flannel pajamas with the Eiffel Towers on them in the laundry basket and the ChapStick on my nightstand. My book would be on the bed, open to the place I’d left off, and my hair would still be entwined in my brush. There would be my really expensive wrinkle minimizer, which honestly didn’t minimize much of anything, and my phone charger still plugged into the wall.
This is how it would look
, I would think.
This stuff here
.

Whenever I had to get on a plane, I played that game in my
head, too. I worried about what people might find afterward, at my house. You know, if we went down in a fiery ball, wearing our yellow flotation devices with the helpful little whistles attached. Does anyone else do this? Fixate on impossible and pointless mental puzzles? I don’t know. Flying used to be fun, but after 9/11 I did this stupid thing where I would wonder if I should have hidden certain stuff before I left home. Not that there would be much to hide—I’m not guilty of too many things. But I’d worry about those few old love letters, the ones I’d kept from the early days with my first husband, which Ian would have hated to discover. And that half bottle of Vicodin from that root canal, which I’d kept in case I was hit with some emotional crisis I couldn’t handle. Oh, and that red lace thong-thing that Ian gave me one Valentine’s Day. I don’t know what he was thinking. If I never came home, my daughter might see it and think I actually wore it. That particular mental image might scar the poor girl for the rest of her life.

That’s pretty much been the extent of my secrets. I guess you could say my conscience works overtime. And while I never actually moved the red lace thong or hid the pill bottle before I traveled, I
did
wipe up spilled stuff in the microwave and remove that big slab of fluff from the dryer vent that wasn’t supposed to be in the dryer vent. I made sure my house was clean. Tidying up my domestic crimes so no one would find out that I made messes and couldn’t keep my appliances under control, which is probably some home version of the wear-clean-underwear-in-case-of-an-accident idea.

These head games—I guess they’re you, in your small way, trying to psych out the here-gone-ness of life, or maybe they’re about the awareness that comes after a certain age of inevitable grief hovering nearby. Or maybe they’re just about wanting to be good, even in death. Avoiding humiliation even when you’re
stone-cold gone. I don’t know. But what I do know, what I’ve thought about since that day, is that it was always me I imagined suddenly missing. I never imagined finding anyone else’s pill bottles or the slippers that had formed to their feet, now ditched under the bed. I didn’t think about discovering someone else’s breakfast dishes or the change from their pocket left out on the dresser, their presence sitting right next to their absence.

That morning, well, the objects around me have no more significance than they did the day before. It seems wrong, doesn’t it? His reading glasses on the nightstand don’t send me some big message. His water glass doesn’t tell me the things I should know. I’d been dreaming—I was up high somewhere and I was scared and there was some kind of pounding noise, but when I open my eyes, I realize it’s a dream trick and that the sound is real. It’s outside my window. Our boat must have gotten loose or something, and it’s banging against the dock.

I lie there, catching up to the facts of my life as one does before first getting up, looking at the white of the curtains and trying to guess what the weather’s like. Dim white, likely cloudy. In Seattle, cloudy is a good prediction no matter what the season. I don’t check to see whether he’s there next to me or not. I guess I just assume he’s there, because it’s still early. We have one of those astronaut-foam-type mattresses, where you can thrash around and the other person won’t even notice. I think the advertisement shows a glass of water, which sits still and undisturbed on the bed in spite of some guy jumping next to it. Anyway, the dog can get up there, and you won’t even know it until you open your eyes and find him staring right at you.

I roll over. I’m trying to remember as best as I can. I recall
expecting
to see the hill of his shoulders turned away from me, his
tidy black hair on the pillow. But I see only the empty bed next to me. Wide, empty, glorious space, and I stretch my legs over to his side and I’m happy about it, that space. I listen, trying to determine if he’s home. There’s that stupid banging, but the house seems still. Maybe he went for a run, or to work, even though it’s Sunday, which wouldn’t be unusual. Yeah: I realize there are no footsteps, or the sound of the toaster lever being pushed down, or the hum of television voices. He’s likely gone, and I’m relieved. I’m sure I’m not the only wife who feels that—the small relief at his absence. I love him very much, I do; but the house to yourself … No need for conversation or company or the press of his presence … Ah—coffee in bed, the thrill of aloneness, and a couple of Oreos on a paper towel for breakfast—bliss.

But first there’s that banging.

I get up and walk downstairs. God, I feel it then, the banging in my own head, a nasty throb from too much wine at that horrible party the night before. BetterWorks, Ian’s software company, had released a new product, something that would change the way we share large video files. I don’t really know the details. I should, but I don’t. I want to understand it all, but my mind has its own instant off switch that’s tripped by lengthy explanations, instruction manuals, and rules to board games read aloud. I have a college education, but, I swear, the minute someone wants to enlighten me about how a fax works or how to play hearts, the mental doors slam shut.

The party was one of those swanky affairs, held in the beautiful lobby of the BetterWorks offices on Queen Anne Hill. The night was all shiny black behind those high, high glass windows, and the city sparkled below us. The Space Needle was right there, in all its George Jetson–Tomorrowland glory. Ian’s partner, Nathan Benjamin, was at the party, and I like Nathan. I
liked him even before I met him years ago, because he has those two first names, which makes him sound friendly. But the room was full of other people, too, of course—programmers and project managers and investors and investors’ wives, eating fancy little foods off tiny napkins and making witty conversation, and later in the evening the party spilled over to the wide, damp lawn of Kerry Park, which lays adjacent to BetterWorks. All night I pretended not to be shy, even though I’d rather have been home eating popcorn and watching the Travel Channel. I kept pulling at my hem, because Ian had bought me this tight black dress and asked me to wear it and I was mad at myself for agreeing. A Band-Aid would have covered more and cost a lot less. I had heels on, and the floor was slippery, and I kept thinking of the way my sister, Amy, and I used to roller-skate in our garage when we were kids, inching our way around by clutching the workbench and then the bicycles and then the lawn mower.

Reasons for too much wine, right there.

“Oh, no, Poll. Pollux, boy. He didn’t let you out?” My Pollux, my sweet black mutt, he’s getting old. He has to be taken outside the minute you wake up, poor guy. I wipe up the puddle. The thrill of unexpected alone time gives way to irritation. It’s him I’m irritated with. Ian. Overlooking my,
our
, sweet old dog, who now looks ashamed. The pee requires practically half of a roll of paper towels, and there’s that banging and my pounding head.

I step over my heels, which have been abandoned by the door. What a night. I can’t remember ditching them there, or even coming home and getting into bed, to tell you the truth. This isn’t normal for me, I should also say. I rarely have more than a glass of wine, two at the most. I’ve been truly drunk maybe only twice in my life, once way back in high school with Tommy Truello and wine in a box. We drank it before going to dinner at the
Velvet Turtle restaurant on our way to the homecoming dance. I was spinning and sick the rest of the night. It scared me. I don’t like to lose control.

Pollux recovers his dignity and trots behind me as I open the door to the back deck. The front end of our small sailboat has come loose, and it’s slamming into the dock with each wave of the lake. I’m glad Ian isn’t here to see it. He’d be pissed. I kneel down; I make a couple of grabs for the boat before catching it, and then I examine it for scratches. It looks okay. I even run my hand along its surface, in case there’s something I can’t see but he’ll surely notice. I was the one to tie it down when we came back in from our sail Friday evening, so it’ll be my fault that the rope hasn’t been secured properly. Narrow miss. He’ll never know, and I’m glad. Ian doesn’t make those kinds of mistakes, and he’s not particularly patient when anyone else does.