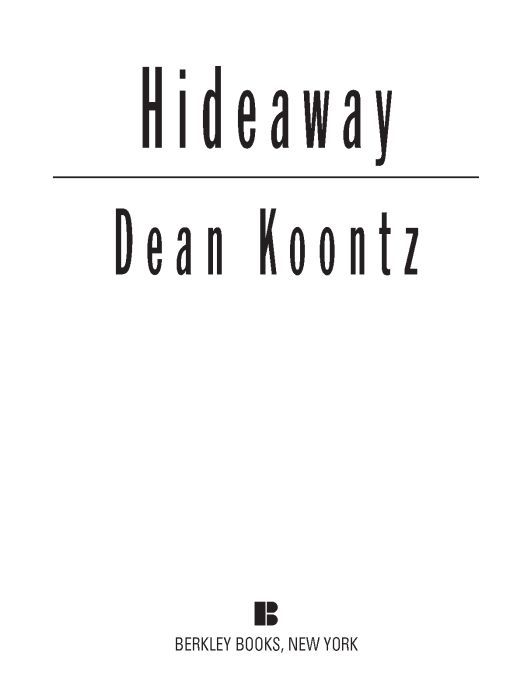 Table of Contents
Title Page
Copyright Page
Dedication
Epigraph
Part I - JUST SECONDS FROM A CLEAN GETAWAY
ONE
TWO
THREE
Part II - ALIVE AGAIN
FOUR
FIVE
SIX
Part III - DOWN AMONG THE DEAD
SEVEN
“Not just a thriller, but a meditation
on the nature of evil.”
—
Lexington
Herald-Leader

He was clinically dead after the accident—but was miraculously revived. Now Hatch Harrison and his wife, Lindsey, approach each day with a new appreciation of life ... shadowed by his glimpse of death.
Something has come back from the other side. A terrible presence that links Hatch’s mind to a dangerous psychotic. A dark force of murderous rage that hides within us all...

HIDEAWAY
“Fiercely exciting ... a slam-bang finale.”
—
Kirkus
Reviews
Praise for Hideaway
“Koontz’s best effort to date. Masterful. He shows a deep understanding of the goodness of the human spirit and capably weaves the light into his dark story.”
—
San Diego Union-Tribune
“Fiercely exciting. A grandly melodramatic morality play that will have Koontz’s fans—both here and in heaven—cheering.”—
Kirkus Reviews
“Dazzling, creepily horrifying. Hideaway is written with a spare, deadly power.”—
The Anniston Star
“A hell of a story.”—
New York Daily News
“This is not just a chilling novel; it’s an igloo in mid-winter with the air-conditioning on. Taut ... gripping ... the ending is dead-solid perfect.”—
The
Raleigh News & Observer
“A bone-chilling danse macabre along the outposts of life.”
—
USA Weekend

“An effective chiller that will gnaw at the reader for a long time. As always, his characterizations are first-rate.”
—
The London Free Press

“Terrific ... tense.”—
Richmond Times-Dispatch
“Koontz is the only writer whose novels I will buy in hardcover without hesitation or reservation. Readers will love this novel.”—
Chattanooga News-Free Press
“Koontz has one of the most incredible gifts for the art of language... a master of images and descriptions. His characters are timeless and beautifully constructed. He proves ... you can be on the bestseller list and don’t have to be dead or named Hemingway to have the depth and feeling of ‘the classics.’”—
The
Michigan State News
“A masterpiece of taut writing and vivid detail... a stunning exercise in suspense.”—
Orange
County Register
“A chiller capable of leaving emotional bruises on readers.” —The
Associated Press
“This man can write with a vengeance.”—
The
Calgary Sun
“Wonderful characters and heart-pulsing excitement.”
—
Calgary Herald
“Koontz leaps beyond the bounds of the usual supernatural thriller. Hideaway is a novel of ideas.”
—
Lexington Herald-Leader
“Koontz cleverly weaves a modem parable of life and death, good and evil, love and hate, light and darkness. Genuinely chilling ... brilliant”
—Mystery Scene
“A quantum-leap forward. Chilling ... taut.”
—
The Philadelphia Inquirer
“Riveting. Koontz has a mesmerizing hold, smoothly terrorizing readers with intensifying action, strong, believable characterization, and excellent pacing.”
—
Lansing State Journal
“With each new novel, Koontz’s work becomes more skillful, more ambitious, more chilling.”
—
Orange Coast Magazine
“Breathless pace, suspense, deeply drawn characters.”
—
Santa Cruz Sentinel
“A frightening read with charismatic characters ... an engrossing look at ethical problems inherent in modern medical technology.”—
Rocky Mountain News
“
Hideaway
is the author’s best since his now-classic Watchers. Sheer page-turning fright ... incredibly tight, very cinematic.”—
The Macon Telegraph & News
“Koontz is a genius. The pages fly by.”—
The Manning Times
“Koontz delivers the goods again.”—
Boston
Sunday Herald
“
Hideaway
keeps the reader enthralled from first page to last.”—
The Nashville Banner
“A taut serial-killer thriller and surprising occult fantasy. Chillingly convincing. It does exactly what it sets out to do and does it well.”—
Locus
“Totally absorbing.”—
St. Louis Post-Dispatch
“Koontz raises intriguing questions about life, death, evil, and faith that are worthy of C.S. Lewis. Hideaway is a thrilling read.”
—
The Flint Journal
Berkley titles by Dean Koontz
THE EYES OF DARKNESS
THE KEY TO MIDNIGHT
MR. MURDER
THE FUNHOUSE
DRAGON TEARS
SHADOWFIRES
HIDEAWAY
COLD FIRE
THE HOUSE OF THUNDER
THE VOICE OF THE NIGHT
THE BAD PLACE
THE SERVANTS OF TWILIGHT
MIDNIGHT
LIGHTNING
THE MASK
WATCHERS
TWILIGHT EYES
STRANGERS
DEMON SEED
PHANTOMS
WHISPERS
NIGHT CHILLS
DARKFALL
SHATTERED
THE VISION
THE FACE OF FEAR 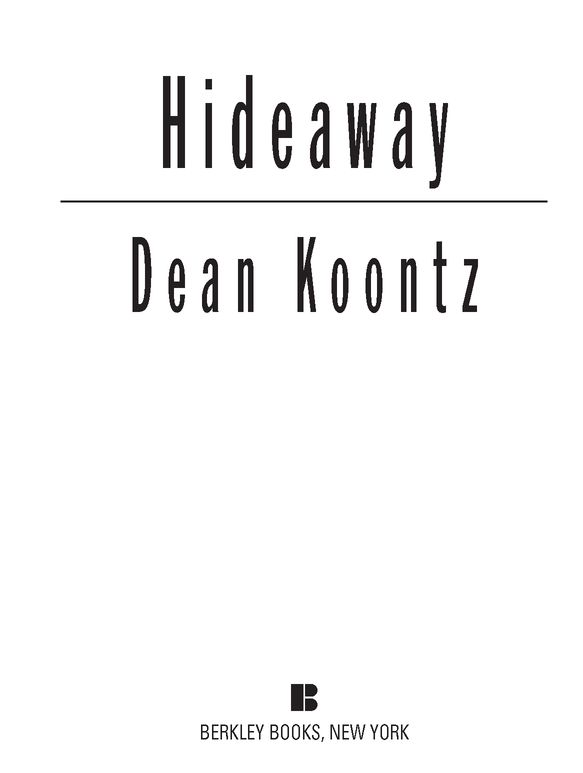 TO GERDA. FOREVER.
O,
WHAT MAY MAN WITHIN HIM HIDE,
THOUGH ANGEL ON THE OUTWARD SIDE!
—
William
Shakespeare
Part I
JUST SECONDS FROM A CLEAN GETAWAY
Life is a gift that must be given back,
and joy should arise from its possession.
It’s too damned short, and that’s a fact.
Hard to accept, this earthly procession
to final darkness is a journey done,
circle completed, work of art sublime,
a sweet melodic rhyme, a battle won.
—THE BOOK OF COUNTED SORROWS
ONE
1
An entire world hummed and bustled beyond the dark ramparts of the mountains, yet to Lindsey Harrison the night seemed empty, as hollow as the vacant chambers of a cold, dead heart. Shivering, she slumped deeper in the passenger seat of the Honda.
Serried ranks of ancient evergreens receded up the slopes that flanked the highway, parting occasionally to accommodate sparse stands of winter-stripped maples and birches that poked at the sky with jagged black branches. However, that vast forest and the formidable rock formations to which it clung did not reduce the emptiness of the bitter March night. As the Honda descended the winding blacktop, the trees and stony out-croppings seemed to float past as if they were only dream images without real substance.
Harried by fierce wind, fine dry snow slanted through the headlight beams. But the storm could not fill the void, either.
The emptiness that Lindsey perceived was internal, not external. The night was brimming, as ever, with the chaos of creation. Her own soul was the only hollow thing.
She glanced at Hatch. He was leaning forward, hunched slightly over the steering wheel, peering ahead with an expression which might be flat and inscrutable to anyone else but which, after twelve years of marriage, Lindsey could easily read. An excellent driver, Hatch was not daunted by poor road conditions. His thoughts, like hers, were no doubt on the long weekend they had just spent at Big Bear Lake.
Yet again they had tried to recapture the easiness with each other that they had once known. And again they had failed.
The chains of the past still bound them.
The death of a five-year-old son had incalculable emotional weight. It pressed on the mind, quickly deflating every moment of buoyancy, crushing each new blossom of joy. Jimmy had been dead for more than four and a half years, nearly as long as he had lived, yet his death weighed as heavily on them now as on the day they had lost him, like some colossal moon looming in a low orbit overhead.
Squinting through the smeared windshield, past snow-caked wiper blades that stuttered across the glass, Hatch sighed softly. He glanced at Lindsey and smiled. It was a pale smile, just a ghost of the real thing, barren of amusement, tired and melancholy. He seemed about to say something, changed his mind, and returned his attention to the highway.
The three lanes of blacktop—one descending, two ascending—were disappearing under a shifting shroud of snow. The road slipped to the bottom of the slope and entered a short straightaway leading into a wide, blind curve. In spite of that flat stretch of pavement, they were not out of the San Bernardino Mountains yet. The state route eventually would turn steeply downward once more.
As they followed the curve, the land changed around them: the slope to their right angled upward more sharply than before, while on the far side of the road, a black ravine yawned. White metal guardrails marked that precipice, but they were barely visible in the sheeting snow.
A second or two before they came out of the curve, Lindsey had a premonition of danger. She said, “Hatch ...”
Perhaps Hatch sensed trouble, too, for even as Lindsey spoke, he gently applied the brakes, cutting their speed slightly.

The Battle of the St. Lawrence by Nathan M. Greenfield
On the Verge (A Charmed Life Book 1) by Joseph Bonis
Heart Waves by Sibarium, Danielle
Owning His Bride by Sue Lyndon
Sleepover Club 2000 by Angie Bates
The Book of Lies by James Moloney
Lilah's List by Robyn Amos
The Family Doctor by Bobby Hutchinson
The President's Daughter by Jack Higgins
Human for a Day (9781101552391) by Greenberg, Martin Harry (EDT); Brozek, Jennifer (EDT)