His Christmas Match (A Gentleman's Guide to Once Upon a Time) 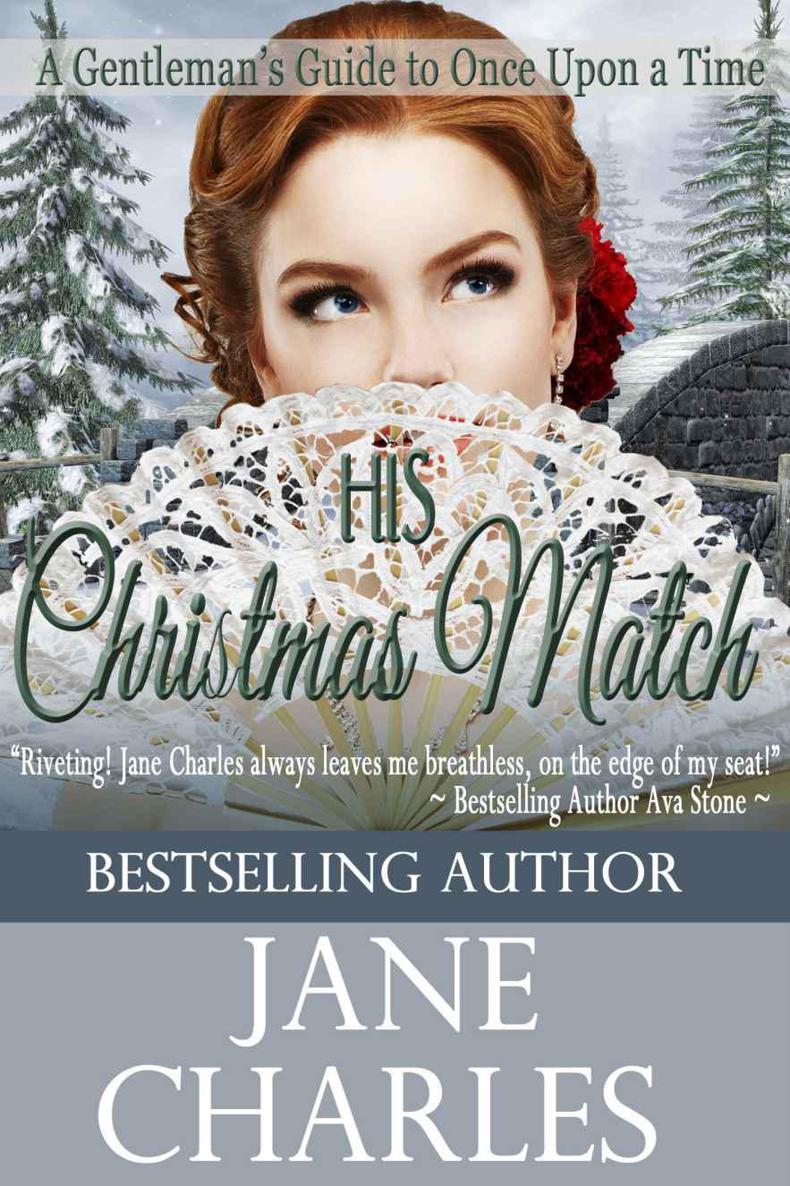 This book is a work of
fiction. Names, characters, locations and events are either a product of the
author’s imagination, fictitious or used fictitiously. Any resemblance to any
event, locale or person, living or dead, is purely coincidental.

This e-book is licensed for
your personal enjoyment only. This e-book may not be re-sold or given away to
other people. If you would like to share this book with another person, please
purchase an additional copy for each recipient. If you’re reading this book and
did not purchase it, or it was not purchased for your use only, then please
return it and purchase your own copy. Thank you for respecting the hard work of
this author.

My very own hero,
my husband and best friend.

I love you more
than you could know

Rosalind Valentine jerked her head up at
the slam of the door.

Goodness, who
would do such a thing?

From her place on
the floor at the far side of the room, she glanced over to her employer, Lady
Sandlin, who frowned and shifted toward the entrance.

Rosalind returned her attention to her two charges; the soon-to-be
four-year-old twins were completely undisturbed by the unusual
interruption.

Where were the servants, and why hadn’t
they announced the new arrival? Had the intruder barged into the manor without
knocking and waiting for the door to be answered?

“Phoebe, where are you?”

Rosalind sucked in a breath. That wasn’t
Lord Sandlin’s voice. What gentleman would dare storm into the Sandlin
household in such a manner yelling for Lady Sandlin by her given name? Rosalind
placed a doll in Heather’s arms and a soldier into Campbell’s pudgy hand and
prepared to sweep the children up and out of the room if necessary. Whoever was
stomping toward this room was angry by his tone, and it was her duty to protect
her charges.

“I’m in here, Noah,” Lady Sandlin
called, and Rosalind’s heart ceased for a moment before it began pounding
anew.

Noah? As in Marques Felding? Lady
Sandlin’s older brother? Rosalind hadn’t seen him in since last Christmas when
he attended services with his family at her uncle’s church.

Rosalind looked for a way to escape the
room to shield her presence from him, but Lord Felding charged into the room
thrusting a piece of parchment out in front of him. “What exactly is the
meaning of this?” he demanded.

He was still the most handsome man
Rosalind had ever encountered. His sandy blonde hair was windblown, probably
because he had ridden over instead of taking a carriage such a distance, and
his light brown eyes were darker than normal.

Was it from anger?

Odd, she had
never known him to show anything but kindness and often, when with her
brothers, laughter. In those situations, his eyes were always a rich brown and
warmed her to her toes. Not that he ever noticed her.

She had dreamt about him for years. He was
the one who played center role in her pretend world of
what if I was a lady
? It was silly of course because she wasn’t a
lady and had no hopes, or any real desire, to become one.

Though, if Lord Felding were to happen to
take notice of her, Rosalind would not mind in the least.

Lady Sandlin smiled innocently. “I
assumed it was self-explanatory.

What do
you not understand?”

“Why you cannot attend the house party
and hunt that Lord and Lady Meadows are hosting.”

Phoebe stood back and held out her arms.
“Is my reason more clear now?”

Felding’s eyes grew round and his jaw
dropped. He looked his sister over from head to toe. “Are you having twins
again
?”

Lady Sandlin laughed and braced a hand
on the arm of the chair before slowly lowering herself into the seat.

“I don’t think so.” She glanced down at her
protruding belly. “Though, one does have to wonder. The babe isn’t to arrive
until sometime in February.”

Rosalind should leave the room so the
brother and sister could visit in private, but she didn’t want to draw
attention to herself. The only way out was through the door Lord Felding just
entered. So far, Lord Felding hadn’t even looked in her direction, and as much
as she may wish he would notice her, in truth, she did not.

It was easier to pretend that he might one
day look upon her with more interest than that of the sister of a friend than
to face him and receive only a nod in greeting.

“Who is going to keep an eye on Penelope
if you are not there?”

Penelope was their younger, second
sister and only twenty.

She was closer
to Rosalind’s younger sisters than to her, though as children, they often
played together.

“Is that what this is about?” Lady
Sandlin scoffed.

“Penny has had two full
Seasons without incident. She no longer needs someone watching over her like a
mother hen.”

Felding crossed his arms over his chest
and tilted his head. “She certainly showed more sense than you.”

Lady Sandlin straightened. “I wasn’t as
bad as you imply.”

A small smile formed
on her lips. “Besides, if I had been less impetuous, I might not be married to
Taylor now.”

Felding snorted and Rosalind bit her lip
to keep from laughing. She had heard a number of rumors of how Lady Sandlin
conducted herself during her one and only Season and a few more stories the
lady herself had repeated.

With
distance, they were rather entertaining. At the time, Lady Sandlin could have
been ruined beyond repair on more than one occasion.

“Normally, it wouldn’t matter. I would
easily be able to keep track of Penelope, but this house party is different.”

Rosalind tilted her head to study him
hoping Lord Felding would explain his comment.

“A lady will be present that I may be
interested in courting.”

A knife through her heart would have
been less painful, and Rosalind quickly looked away and tried to busy herself
with the twins. She should have left the moment he entered; then her world wouldn’t
be tumbling down like the stack of blocks Heather just knocked over. The twins
laughed, and Rosalind forced a smile.

She was a nursemaid to four-year-old twins.

It was her lot in life, and she was happy for
it. Had Vicar Grant and his wife not taken her and her siblings in her life
would not be nearly this pleasant, and she should not wish for things that were
above her reach.

Besides, it wasn’t her actual world that
crashed . . . just the one she liked to escape to.

“Who has finally caught your attention?”
The excitement in Lady Sandlin’s tone drew Rosalind’s attention.

Just last week, when Lady Sandlin’s three
sisters visited, they had sat in this very room ruminating about the fact that
their older brother had not yet taken a bride when most of his friends were
already married, and he was two and thirty.

“The Duke of Eldridge’s daughter?”

Did she hear disappointment in Lady
Sandlin’s tone?

A frown puckered her
employer’s brow.

Lady Sandlin settled further back in her
chair and rested her hands on her protruding belly.

“I am sure your presence will discourage any
unwanted attention, and Penelope isn’t the type to run off.”

Lady Sandlin insisted. “And it is the Meadows
household, and I am confident they have not invited anyone with whom you would
object to.”

Felding stared at his sister as if
dumbfounded. “Have you forgotten that it was at a Meadows house party that
nearly saw you ruined.”

Felding shook his head and turned away
to pace. “I don’t want the distraction,” he argued. “I suggested she remain
home, but Penny refused.”

“Of course she did!”

He pushed his fingers through his hair and
paced at the end of the room. “I must have someone who can watch over Penny and
not be distracted.”

Lady Sandlin lifted and eyebrow in
humor. “A companion? We no longer have a governess at our disposal.”

He stopped and stared at her with hope
in his eyes. “Do you think we might hire one?”

“Then what do you suppose I do?”

“Nothing. It is a simple house party.
Penelope will have a grand time, and you will be able to court Lady Jillian.”

“It is not that simple,” Lord Felding
ground out and began pacing anew.

“I
will not be able to give attention to the matter as I wish if I have to worry
about what Penny is up to, or who may wish to pursue her.”

Her eyes narrowed and she
tilted her head. “Why the sudden hurry to court Lady Jillian?” Lady Sandlin
asked with curiosity? “Are you in love with her?”

Felding shook his head but said nothing.

“If not love, then why the rush, unless
you hope to make a Christmas Match?” Lady Sandlin chuckled and relaxed back in
her seat. “I had no idea you were so romantic.”

“I would like the matter for my future
settled,” Felding grumbled.

“The quicker
that is done the better, and I don’t want to endure another Season without a
betrothal or marriage.”

“You sound like a miss facing her third
Season with no prospect of a husband in sight.” Lady Sandlin laughed.

“Are you going to help me or not?” Lord
Felding demanded.

Rosalind bit her bottom lip to keep from
laughing.

The two of them reminded
Rosalind much of her and brothers on the rare occasions they were
together.

She missed the teasing and
bickering siblings shared.

“I still don’t think it is necessary
that you have someone attend Penelope,” Lady Sandlin insisted.

Lord Felding turned and stared at his
sister. “House parties can be very dangerous, as you well know.”

Rosalind looked away again, heat infused
her cheeks. Nobody needed to tell her how dangerous they were. It was the
reason she was no longer with her last employer. A simple mistake, gossip, and
innuendo had ruined her.

Thankfully,
Lady Sandlin didn’t put stock in what she heard, and believed Rosalind’s
version of the events involving her and Mr. David Thorn. Shortly after the
incident, Lady Sandlin offered her a position within this household despite the
rumors.

“If it is that important to you,” Lady
Sandlin began, “why don’t you ask Rosalind to watch over Penelope?

I can assure you that Penny would prefer
Rosalind to an old, strict matron you are likely to employ.”

Rosalind’s head jerked up. Surely, Lady
Sandlin did not mean her. There must be another Rosalind she didn’t know about.

At least he thought of her first when
the name was mentioned which warmed her heart. Though, she could very well be
the only Rosalind of his acquaintance.

Lord Felding pushed his fingers through
his hair and blew out a breath. Perhaps she should make her presence known
before he said something she did not want to hear.

“She would be perfect,” he said a moment
later nodding his head and settled on the seat beside his sister.

“She knows very well the dangers a house
party can offer.”

Inwardly, Rosalind cringed. Surely, Lord
Felding didn’t believe those horrible rumors; the very ones that saw to her
ruination so that she could never show her face in society again. Not that she
had been part of society only a governess in a lord’s household.

Not only was her reputation ruined because of
that one night, but all employment possibilities as well.