Within the first decade of this century, historian Richard Weikart, in his books,
From Darwin to Hitler
(2004) and
Hitler’s Ethic: The Nazi Pursuit of Evolutionary Progress
(2009), has written about a much-neglected topic—the influence of evolutionary ideology on Hitler and the rise of Nazism. In the wake of Dr. Weikart’s publications, Jerry Bergman has investigated the impact of evolutionary thought on the lives of Hitler’s henchmen, such as Dr. Josef Mengele, Martin Bormann and Hermann Göring, to name a few.

As is characteristic of all of Dr. Bergman’s works,
Hitler and the Nazi Darwinian Worldview
has been thoroughly researched. It is highly significant that the first foreign translation of Charles Darwin’s
On the Origin of Species
occurred in Germany. After having read this book, Ernst Haeckel, a recent graduate in medicine from the University of Würzberg, became an ardent disciple of Darwinism. In time, he would not only become Germany’s foremost biologist, but also the “Father of German Evolutionism.” This status provided him with an ideal platform to promote his version of Darwinism, which focused on the theory of German racial superiority.

In the 1920s, Adolf Hitler established this heinous philosophy as a foundational tenet for his Nazi Party. As Führer of Germany, he instituted the Nuremberg Racial Laws (1935), which he called “The Laws for the Protection of German Blood and German Honor.”
3
Much to the chagrin and horror of the world, those unilaterally declared to be racially inferior by this law were eventually systematically exterminated in the gas chambers of Auschwitz, Treblinka, Belzec and more. Dr. Bergman cogently illustrates that Hitler’s henchmen had two defining characteristics. First, they viewed Hitler as a demi-god. Second, they not only became totally obsessed with the Nazi worldview but were completely convinced that the only viable option for the purification of the “Aryan Race” was the total implementation of the “Final Solution.”

As a retired history teacher, I particularly enjoyed the chapter titled, “Darwinism and Biology textbooks in Nazi Germany.” All textbooks in Nazi Germany had to be approved by the educational authorities and were required to reflect the prevailing worldview and its concomitant values. Their textbooks were Darwinian to the core and were purposefully designed to instill in the minds of young German students that they were indeed a superior race.

It is no wonder that when the Hitler Youth—thoroughly indoctrinated—were sent into the battlefield during World War II, they fought with such intensity and ferocity.

Today, as in the past, universities control the educational system. As proponents of evolutionism, their influence is felt from the primary grades to teachers’ colleges. To validate their nefarious doctrine, they loudly proclaim it not to be religious. Unfortunately, they have convinced the general public, especially the media, of this untruth.

Many Allied soldiers sacrificed their lives to defeat Nazi Germany so that Hitler’s henchmen could be brought before an International Court of Justice to be sentenced and punished for their dastardly crimes against humanity. Dr. Bergman’s book serves as a warning that this same naturalistic worldview that spawned the atrocities of World War II persists to this day. It is growing in intensity, year by year. As Nazism detested Christianity, twenty-first-century secular humanism is no different. In its many manifestos, it preaches peace and tolerance, but underlying lurks a theme of intolerance toward Christianity!

The many people who read the manuscript, in whole or part, include historian Dr. David Herbert; Dr. Steven E. Woodworth, Associate Professor of History at Texas Christian University; Dr. Thomas McMullen, Associate Professor of History at Georgia Southern University; Dr. Wayne Frair, Professor Emeritus at The King’s College, New York; Dr. Richard Weikart, Professor of History at California State University, Stanislaus; Dr. Carl Wieland, David Buckna, Bryce Gaudian and Jan Peczkis. I also want to thank Dr. Bert Thompson, Mary Ann Stewart, Clifford Lillo, Peter Beach, Milt Marcy and the many reviewers. I especially want to thank Bernard Kirk and Dr. Wieland for help in translating German into English. For help in translating the German quotes, I am thankful to Professor Richard Weikart whose work, published and unpublished, I relied on heavily, especially for the section documenting the teaching of Darwinism in Nazi German textbooks. Dr. Weikart also edited the entire manuscript. Needless to say, any mistakes or errors that remain are mine. I have found that translations are not always straightforward and disagreement exists in the best translation of certain expressions.

A note on sources

As is true of any historical study, the reliability of my sources varies. In general, I have used sources that are well recognized by Hitler scholars as very accurate. The veracity of the English translation of
Hitler’s Secret Conversations
and
Hitler’s Table Talk
(compiled by a supporter of Hitler who had his own agenda) has been questioned. Whereas these works are quoted a few times in this book, my conclusions do not rely on them but are well supported by numerous other sources. As research on Hitler progresses I will revise this work to reflect the latest scholarship.

“The leader of Germany [Adolf Hitler] is an evolutionist
not only in theory but, as millions know to their cost,
in the rigor of its practice.”

A
lmost every high-school student knows that one of Hitler’s primary goals was producing a superior race based on the Darwinian idea of ever-advancing progression of life, upward from molecules to humans, caused by natural selection. What is not as widely known, however, is how central this goal was to the entire Nazi movement. Hitler scholar and Yale University Professor Emeritus Fritz Redlich, when asked what was the centrepiece of Hitler’s worldview, answered his social Darwinism and his anti-Semitism, both which flowed from his Darwinian worldview.
1

This volume takes a fresh look at the most influential Nazi leaders, viewing each one through the lens of Darwinian thought. Nazi is the English abbreviation for
Nationalsozialistische Deutsche Arbeiterpartei
or, in English, The National Socialist German Workers’ Party. The conclusion from the academic literature? Almost all Nazi leaders were enslaved to Darwinian ideas and ideals, and almost all were strongly opposed to Christianity to the degree that they eventually wanted to eradicate it from Europe.
2

This is not a judgement but a well-documented fact. The German Führer was “an evolutionist; he has consciously sought to make the practice of Germany conform to the theory of evolution.”
3
Nor should the outcome of his worldview surprise us. As an international committee of psychologists stated in a 1935 manifesto, “war is the necessary outcome of Darwin’s theory.”
4
Darwin’s ideas about race are very clear in his 1871 book,
The Descent of Man
, which has been called a racist tome from cover to cover. On page two Darwin wrote

The sole object of this work is to consider, firstly, whether man, like every other species, is descended from some pre-existing form; secondly, the manner of his development; and thirdly, the value of the differences between the so-called races of man.
5

He then added, to make his intention clear, that it must “be enquired whether man, like so many other animals, has given rise to varieties and sub-races, differing but slightly from each other, or to races differing so much that they must be classed as doubtful species?”
6
Darwin added that by applying his survival of the fittest theory, the eventual result of the differences between the races was that “the civilized races of man will almost certainly exterminate, and replace throughout the world the savage races”
7
The result will be that 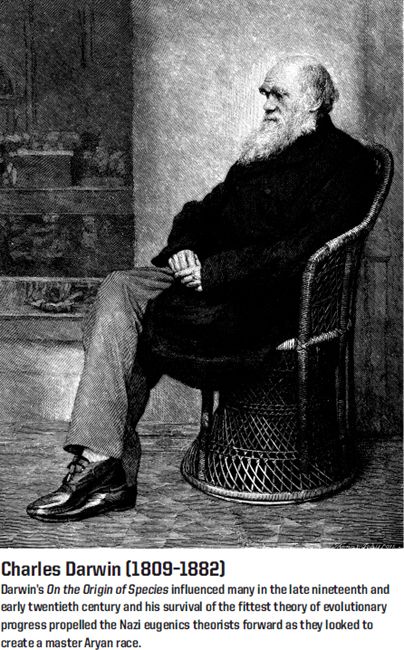 The break between man and his nearest allies will then be wider, for it will intervene between man in a more civilized state—as we may hope, even than the Caucasian and some ape as low as a baboon instead of now between the negro or Australian [Aborigine] and the gorilla.
8

Darwin “clung to the idea that the human races were distinctly different and basically unchangeable.”
9
Furthermore, “according to Charles Darwin, the ‘strong’ were bound to be victorious, and the ‘weak’ to perish.”
10
Furthermore, as will be documented, Darwin’s own words condemned him as a racist:

When the
Beagle
arrived in Tierra del Fuego at the southernmost tip of South America, Darwin was astonished and horrified at the sight of the savages who ran out to meet the boat. “It was without exception,” he wrote in his diary of the voyage, “the most curious and interesting spectacle I had ever beheld. I could not have believed how wide was the difference, between savage and civilized man. It is wider than between a wild and domesticated animal, inasmuch as in man there is a greater power of improvement.”
11