Read How to Paint a Cat (Cats and Curios Mystery) Online

How to Paint a Cat (Cats and Curios Mystery) 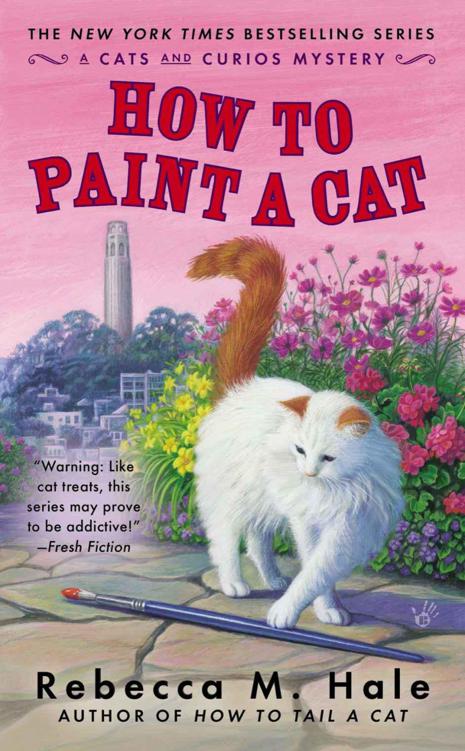 “Written with verve and panache.”

—Carolyn Hart, national bestselling author of
What the Cat Saw

“Quirky characters, an enjoyable mystery with plenty of twists, and cats, too! A fun read.”

“This exciting road trip goes from danger to humor and back as the adorable cats are brilliant tacticians who amusingly but cleverly maneuver the niece somewhat for treats but often to keep her safe. Fast-paced cozy readers who enjoy something different will relish the charming Cats and Curios Mysteries (see
Nine Lives Last Forever
and
How to Wash a Cat
) as Oscar’s niece continues her dangerous adventures into the weird, whimsical world of her late uncle.”

“Full of quirky, yet credibly described characters . . . Intriguing . . . Doubly fun for those familiar with this beautiful city . . . This is a PURR-fect treat for feline and mystery fans alike! Warning: Like cat treats, this series may prove to be addictive!”

HOW TO WASH A CAT

HOW TO MOON A CAT

HOW TO TAIL A CAT

HOW TO PAINT A CAT

Mysteries in the Islands 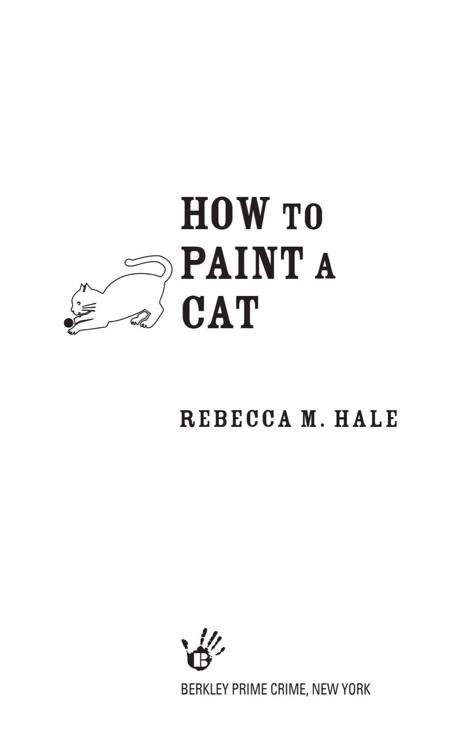 HOW TO PAINT A CAT

For Helen Hale, my grandmother

Praise for the Cats and Curios Mysteries

The Conservatory of Flowers

IN A REMOTE
corner of the Sonoma woods, far from the nearest public road, a man’s humming floated up through the branches of an ancient redwood grove.

It was the only sound in the otherwise quiet forest. A damp winter mist hung in the air, an acoustic insulator that soaked up all but the most vigorously transmitted noise.

The source of the happy humming knelt by a fire pit in the middle of a small clearing. Built like a lumberjack, Sam Eckles sported a thick overgrown beard and a mass of tangled red hair, both of which threatened to ignite as he paused his singing to puff on the embers in the bottom of the pit.

The rest of the rustic campsite featured a tiny tin-roofed cabin, a few fallen logs used as benches, and a hammock strung between the gnarled trunks of two redwoods.

“Ah, there she is,” Sam whispered as a flame flickered in the charred remains of the fire he’d stoked earlier that morning. Leaning back on the heels of his thick-soled hiking boots, he placed a metal rack over the pit and positioned its foldout legs so that the grated surface would be centered over the heat.

Two bright green frogs sat on a log a few feet away, watching as Sam nursed the flame, slowly feeding in kindling. They had observed the procedure countless times since the group’s arrival at the campsite last November, but the amphibian pair never seemed to tire of staring at the fire’s dancing orange light.

Before long, Sam had built a blaze suitable for cooking. He slid a cast-iron skillet filled with cooking grease onto the grate and waited for its temperature to rise. Once the grease melted and began to pop in the pan, he reached for a paper bag containing two dozen raw chicken legs mixed with a specially formulated flour coating. Folding over the bag’s top edges to secure the contents inside, he gave the bag a vigorous shake. Despite the sealing precaution, a cloud of flour filled the air, leaving a white dusting on his red beard.

After a few choking coughs, Sam picked up a pair of metal tongs, slid the pointed ends into the sack, and began fishing out the legs. It was a tricky procedure, but he missed only once as he dropped each piece of battered meat into the hot skillet. Then he covered the meal with a metal lid and sat back to wait.

As the legs began to simmer, the scent of crisping chicken wafted toward the cabin, drifting through its open doors and windows.

Inside, an elderly man with thinning white hair and short rounded shoulders stood in front of a two-by-six canvas propped onto an easel. Holding a pencil-thin paintbrush in his hand, he leaned toward the painting, squinting at the densely populated street scene spread across much of its surface.

A weariness tinged the man’s graying blue eyes, and there was a tired slump to his already bent posture. He felt as if he had aged more in the past two months than in the previous two years combined.

Painting was strenuous work, even for someone with his skills, but it was critical that he get each brushstroke right. The finished product was destined for a public location in downtown San Francisco, where it would have an important message to convey.

The piece was a re-creation of a much larger mural, one composed during the Great Depression for the interior of a well-known San Francisco landmark. It was an exact replica—with a few subtle differences.

The painter checked the emerging image against a color photocopy of the original; then he dabbed his brush into a palette of paints.

His arthritic hands ached from the hours of tension, but he ignored the pain, spurred on by the knowledge that this project might be his life’s last significant contribution.

“Hey, Oscar. You ready for a break?” Sam called out from his cooking station by the fire. “Lunch will be ready soon.”

The old man set down his brush and stepped to the cabin door. Massaging a stitch in his lower back, he looked out over the campsite. As he breathed in the welcome aroma smoking up from the fire pit, he glanced into the woods.

A white cargo van was parked in the brush beyond the clearing. He and Sam had covered the roof with camouflage-colored netting to ensure that the vehicle wouldn’t be spotted from the air.

He stroked his chin, pondering the rash of fresh dents along the van’s metal sides and front bumper.

The vehicle had taken a beating during their off-road journey through the woods to the campsite, but it had managed the task admirably. Whether the van would survive the return trip, however, was still an open question.

Putting those concerns aside, Oscar joined Sam by the fire. For the time being, all that mattered was that they were safely hidden.

An owl hooted down from the dizzying heights above the camp, and the old man craned his neck to look up, marveling at the site’s concealed location. He and Sam were but two dots of flesh in a vast wilderness of green.

Their campsite was situated on a private parcel of land, which was, in turn, surrounded by acres of public forest. For the last century, the property had been owned by a secretive group of artists, businessmen, and politicians, formally known as the Bohemian Club. The members valued seclusion over ease of access, and the camp was located in one of the property’s most remote locations.

It was the perfect hiding spot for a pair of fugitives.

The duo had fled San Francisco in November following the gruesome murder of a City Hall intern. So far, the police had been unable to definitively link them to the young man’s slaying, but as they had last been seen fleeing the crime scene, they were now the primary suspects.

In the eyes of the investigators, the pair’s sudden disappearance had only confirmed their guilt.

The humans’, that is—the frogs were just along for the ride.

We're Just Friends: Short Story Prequel to Pam of Babylon #8 by Suzanne Jenkins
Nadya's Nights: Road to Vengeance by Indy McDaniel
Grasshopper Glitch by Ali Sparkes
In Defence of the Terror by Sophie Wahnich
Behind That Curtain by Earl Der Biggers
Glory by Alfred Coppel
My Sister's Ex by Cydney Rax
Stone's Kiss by Lisa Blackwood
Dreamland Social Club by Tara Altebrando
Seduction on the CEO's Terms by Charlene Sands