Read How to Talk About Books You Haven't Read Online

How to Talk About Books You Haven't Read 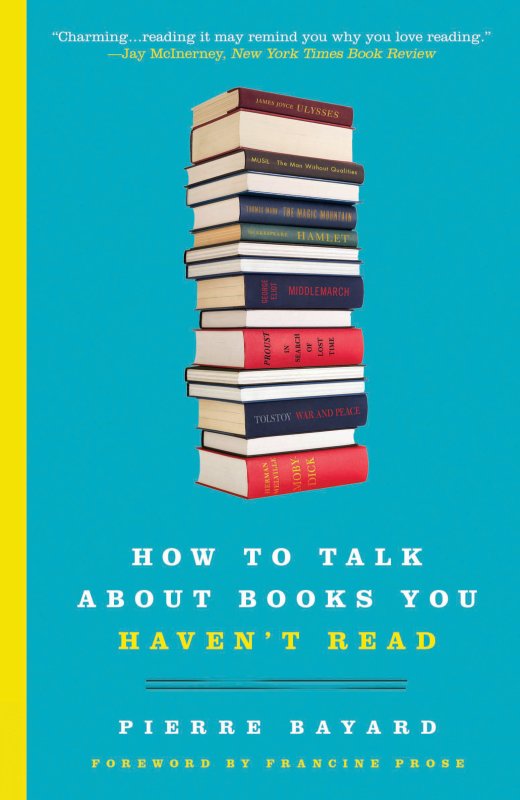 How to Talk About

Translated from the French
by Jeffrey Mehlman

Ways of Not Reading

I. Books You Don’t Know

(in which the reader will see, as demonstrated by a character of Musil’s, that reading any particular book is a waste of time compared to keeping our perspective about books overall)

II. Books You Have Skimmed

(in which we see, along with Valéry, that it is enough to have skimmed a book to be able to write an article about it, and that with certain books it might even be inappropriate to do otherwise)

III. Books You Have Heard Of

(in which Umberto Eco shows that it is wholly unnecessary to have held a book in your hand to be able to speak about it in detail, as long as you listen to and read what others say about it)

IV. Books You Have Forgotten

(in which we confirm, along with the Tiv tribe of western Africa, that it is wholly unnecessary to have opened a book in order to deliver an enlightened opinion on it, even if you displease the specialists in the process)

VII. Encounters with the Writer

(in which Pierre Siniac demonstrates that it may be important to watch what you say in the presence of a writer, especially when he himself hasn’t read the book whose author he is)

VIII. Encounters with Someone You Love

(in which we see, along with Bill Murray and his groundhog, that the ideal way to seduce someone by speaking about books he or she loves without having read them yourself would be to bring time to a halt)

IX. Not Being Ashamed

(in which it is confirmed, with regard to the novels of David Lodge, that the first condition for speaking about a book you haven’t read is not to be ashamed)

(in which Balzac proves that one key to imposing your point of view on a book is to remember that the book is not a fixed object, and that even tying it up with string will not be sufficient to stop its motion)

(in which, reading S

seki, we follow the advice of a cat and an artist in gold-rimmed spectacles, who each, in different fields of activity, proclaim the necessity of invention)

XII. Speaking About Yourself

(in which we conclude, along with Oscar Wilde, that the appropriate time span for reading a book is ten minutes, after which you risk forgetting that the encounter is primarily a pretext for writing your autobiography)

I never read a book I must review; it prejudices you so.

P
IERRE
B
AYARD
P
UTS
HIS
readers—this reader—in a uniquely paradoxical position. Having just read his witty
How
to Talk About Books You Haven’t Read
, I have now discovered that there was no reason for me to have read it in the first place. But without having read it, how would I have known that I could just as well have skimmed it, or perhaps heard about it somewhere, or possibly formed a sense of the book based entirely on what other readers have said about it, on the sort of received opinions about a work that float around in the culture? In addition, not having read the book shouldn’t—or so Pierre Bayard has assured me—prevent me from talking confidently and learnedly about it, or even from writing these brief, introductory words of appreciation. But how would I have known that without Bayard’s sage advice, which I could only have found in his wise and original volume?

In any case, the fact remains that I am very glad I did read Bayard’s book. Had I skimmed it too rapidly, I might have missed the chapter in which he gives us the thrilling examples of literary doublespeak with which Paul Valéry eulogized Marcel Proust and Anatole France while making it quite clear that he had hardly read a word of their work. Had I not read Bayard, I would not have found myself determined not only to read—but to reread—Graham Greene’s
The Third
Man
, as well as the essay in which Montaigne lamented his failing memory and its effect on his ability to read and retain what he had read. I would not have been so thoroughly entertained by Laura Bohannan’s attempt to discuss
Hamlet
with a group of West African tribesmen whose responses were hilariously and informatively out of synch with the instant, cross-cultural recognition of Shakespeare’s universality that she expected. Nor would I have been so pleased to discover that Bayard’s advice to those who meet writers of books they have not read confirms, so very gratifyingly, my own observation and experience: “Praise it without going into detail. An author does not expect a summary or a rational analysis of his book, and would even prefer you not to attempt such a thing. He expects only that, while maintaining the greatest possible degree of ambiguity, you will tell him that you like what he wrote.”

Having read such passages, I can only hope that I am not being insufficiently ambiguous when I say that what I liked best about Pierre Bayard’s sly meditation on the permissibility, the importance, and the sheer necessity of not reading is how, without our quite being aware of it, it becomes a study of the psychology of reading and of the purposes of literature, and a hymn to the pleasures of reading and to all the reasons why we cannot live without it.

B
ORN INTO A MILIEU
where reading was rare, deriving little pleasure from the activity, and lacking in any case the time to devote myself to it, I have often found myself in the delicate situation of having to express my thoughts on books I haven’t read.

Because I teach literature at the university level, there is, in fact, no way to avoid commenting on books that most of the time I haven’t even opened. It’s true that this is also the case for the majority of my students, but if even one of them has read the text I’m discussing, there is a risk that at any moment my class will be disrupted and I will find myself humiliated.

In addition, I am regularly called on to discuss publications in my books and articles, since these for the most part concern the books and articles of others. This exercise is even more problematic, since unlike spoken statements—which can include imprecisions without consequence—written commentaries leave traces and can be verified.

As a result of such all-too-familiar situations, I believe I am well positioned, if not to offer any real lesson on the subject, at least to convey a deeper understanding of the non-reader’s experience and to undertake a meditation on this forbidden subject.

It is unsurprising that so few texts extol the virtues of non-reading. Indeed, to describe your experience in this area, as I will attempt here, demands a certain courage, for doing so clashes inevitably with a whole series of internalized constraints. Three of these, at least, are crucial.

The first of these constraints might be called the obligation to read. We still live in a society, on the decline though it may be, where reading remains the object of a kind of worship. This worship applies particularly to a number of canonical texts—the list varies according to the circles you move in—which it is practically forbidden not to have read if you want to be taken seriously.

The second constraint, similar to the first but nonetheless distinct, might be called the obligation to read thoroughly. If it’s frowned upon not to read, it’s almost as bad to read quickly or to skim, and especially to say so. For example, it’s virtually unthinkable for literary intellectuals to acknowledge that they have flipped through Proust’s work without having read it in its entirety—though this is certainly the case for most of them.

The third constraint concerns the way we discuss books. There is a tacit understanding in our culture that one must read a book in order to talk about it with any precision. In my experience, however, it’s totally possible to carry on an engaging conversation about a book you haven’t read— including, and perhaps especially, with someone else who hasn’t read it either.

Moreover, as I will argue, it is sometimes easier to do justice to a book if you haven’t read it in its entirety—or even opened it. Throughout this book, I will insist on the risks of reading—so frequently underestimated—for anyone who intends to talk about books, and even more so for those who plan to review them.

The effect of this repressive system of obligations and prohibitions has been to generate a widespread hypocrisy on the subject of books that we actually
have
read. I know few areas of private life, with the exception of finance and sex, in which it’s as difficult to obtain accurate information.

Among specialists, mendacity is the rule, and we tend to lie in proportion to the significance of the book under consideration. Although I’ve read relatively little myself, I’m familiar enough with certain books—here, again, I’m thinking of Proust—to be able to evaluate whether my colleagues are telling the truth when they talk about his work, and to know that in fact, they rarely are.

These lies we tell to others are first and foremost lies we tell ourselves, for we have trouble acknowledging even to ourselves that we haven’t read the books that are deemed essential. And here, just as in so many other domains of life, we show an astonishing ability to reconstruct the past to better conform to our wishes.

And Sometimes I Wonder About You by Walter Mosley
Rosemary and Rue by McGuire, Seanan
Almost No Memory by Lydia Davis
A Stranger in the Kingdom by Howard Frank Mosher
Understrike by John Gardner
Kite Spirit by Sita Brahmachari
WHITE MARS by Brian Aldiss, Roger Penrose
The Proposition 5: The Ferro Family by H.M. Ward
Sons of Amber: Michael by Bianca D'Arc
Revelations by Melinda Metz - Fingerprints - 6