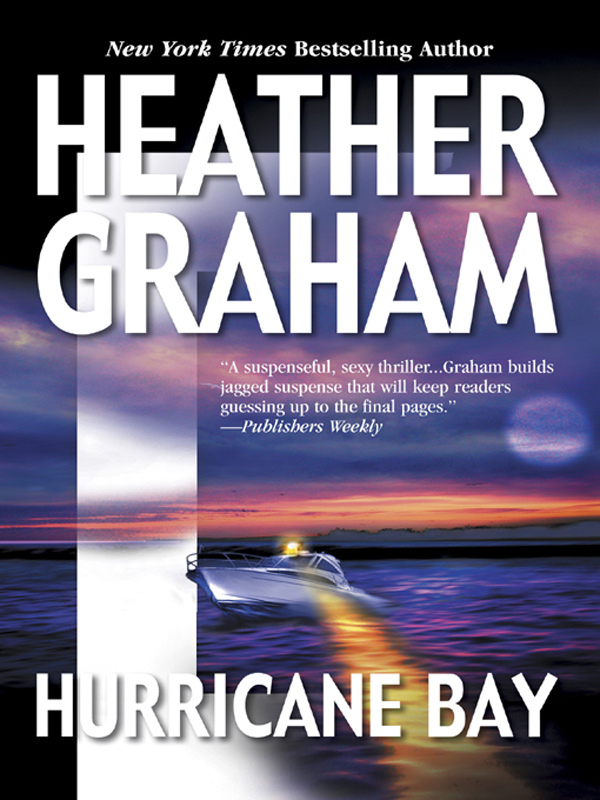 He could remember her words so clearly, and now, with the lowering sun bringing the onset of evening, he found himself hearing their echo over and over again.

There were things he should be doing. But he had searched the beachfront over and over again, and he had found exactly what he had expected: nothing.

His first response upon examining the photo shoved under the door had been to search, regroup, search again, then think it all out and search for a third time.

No, his first response had been shock. Then sorrow. Deep, gut-wrenching sorrow.

Then had come the knowledge that he was being framed, and that no matter how hard he searched he wouldn't find fingerprints or proof of any kind that anyone but he had been on his private beachâwith Sheila.

Who had hated Sheila viciously enough to kill her? Who was cunning, cruel and psychoticâand held such a deep and maniacal sense of vengeance against him?

NIGHT OF THE BLACKBIRD

Watch for the newest blockbuster from
HEATHER GRAHAM

This book is dedicated with the deepest gratitude to
many people.

First and foremost, Choly Zequeira. You are a saint.

Sonia Fraser, Kettia Gaspard and Fay C. Watson.
Thanks for so much.

For the Southeast groupâespecially Doris McManus,
Audrey Fetscher and Rocco.

And with the greatest respect and appreciation to three
special Metro-Dade policemenâSergeant Greenberg
and Officers Mallon and Szolis of the Kendall division.

In fact, his old nickname, Web, had been born there. So few people knew that name. It was special and unique, to a time as well as a place, just like the islands themselves.

Like pearls cast against the ocean, the Keys meandered down from Miami in a southwest string of dazzling and opalescent beauty. The water lay on both sides of the many islands, shimmering in shades of aqua, blue, green, ever varying with the different depths. There were two ways to leave the mainland behind, Card Sound Bridge and US1, and once those routes were touched, the magic began. There was nothing in the world like sunrise on the Keys, the sun arcing into the sky in shades of crimson ecstasy, the heavens flaring with sudden light, golds as brilliant as the reds, pastels streaking from the bright colors with a soft beauty that seemed to caress the soul. Sunsets were even more heavenly, when the fiery globe of day began to fall in slow majesty, creating a new realm of color, magenta stretching fiery fingers out to the horizon, fading to threads of yellow-tinged pink and mauve, until silver and gray began to seep in and finally the orb of the sun disappeared with a last gasp of steaming gold and darkness fell.

There were few other places where darkness could be so complete.

Not, of course, on the beaten path. Not where the clubs stayed open, and the hotels and motels offered streaming lights for their clientele, and not where the laid-back Tiki bars still sent out soft beacons of welcoming, come-hither brightness. But away from civilization, where nature still prevailed, the darkness could be as complete as a stygian hole, as fearsome as a hell crawling with tiny demons, ready to eat away flesh and go deep enough to consume a human soul.

Ah, darkness. It could offer so much. Sweet secrets and sins, a place in which to hideâ¦

And so it was at night, in the darkness, that Web waited, reflecting on the mystery, beauty and romance in the solitude of night and nature. And the task at hand.

There was an element of danger, of course.

A small elementâ¦but enough to give a little edge to the thrill.

There were those who thought of Key West as the main draw. But Web found the upper keys far more welcoming and natural. Close to the heady civilization of Miami, far enough away to offer the reefs, the sunrises and sunsetsâ¦

Not to mention shadow and darkness. An aura of mystery in which to meet
her
tonight. A surprise, of course, since she would have no idea of all he'd planned, the night, the breeze, the salty-sweet scent of the air, the beachâ¦

She was so beautiful. Even more so when caught in shimmering rays of lightâ¦and shadow.

Web had planned tonight's event meticulously. Everything before her arrival had been set, and everything to follow was arranged to a
T
.

The day had fallen into place perfectly, but now, as Web waited, the timing began to go awry. All the magic would be lost if she did not arrive soon. And this had to be the night, the night when so much would be solved, when reckoning would be met.

Leave it to Sheila to be late.

It gave him time to reflectâ¦.

Every move she had ever made touched Web's heart and soul.

She had to come. And soon. Or all the detailed plans, the ebony mystique of the night, the brilliant ecstasy of dawn, would be lost.

Her car on the road.

Web switched on the portable floodlight.

The bright beam blinded her. It was like the wrath of God. Her car veering, she braked to an abrupt halt. Web calmly walked to the driver's side.

She shielded her eyes with a hand.

It might all have gone badly then. She might have had the window closed and the air on; it was cooler at night, but they were into the dead heat of summer.

But she had been driving with her windows open, luckily. It was a nice night. The air touched with coolness, a forerunner of the storm that would come in during the next day or two. The storm, of course, was part of the perfect plan.

She had seen Web, of course.

“What in the world are you doing?”

“You agreed to meet me,” he reminded her politely.

“For a minute, only a minute. And I never said I'd meet you
here,
in the frigging middle of nowhere.”

She was angry and impatient at having her time taken up. Actually she was frequently impatient with anyone who wasn't in her favor at any given moment.

“It's so lovely here. I wanted you here with me, to see and appreciate just how beautiful it is here. I wanted to give you the night.” Web sighed. “I take it you're not glad to see me?”

“Look, I just saw you earlier today. And I said I'd see you again, so we can talk then.
Briefly.
” Her voice had a husky growl to it that meant she was getting really aggravated. “But I never expected you to half blind me on this godforsaken road. And you are an idiot. I could have hit you.”

“You could have been killed.”

“Interesting thought. But to see you, and alone, it was worth the gamble.”

Suddenly she actually saw Web. “Are you wearing gloves?” she asked incredulously. “It's summer.”

Being Sheila, she didn't have a clue.

“It's not so hot tonight. There's a storm coming in. They haven't named it. It's not a hurricane, a tropical storm, or even a depression yet. But you can feel it. Soon rain will pound. Lightning will soar across the heavens. Thunder will sound like drums.”

“Great,” she said, bored. “Poetry. That really explains the gloves.”

“Diving gloves? With a storm coming in? You're going diving
now?
”

Web ignored her question. “I told you, I really wanted to see you. Alone.”

“Great.” She tossed her silky hair and looked straight ahead at the road. “You've seen me. But we aren't going to be alone. I didn't agree to any of this ridiculousness. I have to go. I haven't got time for your games.”

“You're so wrong. You're going to make time. To spend the night on the beach. To watch the sunrise. Toâ¦appreciate. You have all the time in the world.”

“I don't!” She frowned, growing wary.

Her frown deepened. “You have a camera.”

“For taking pictures on the beach.”

“We're not taking pictures on the beach. Look, I mean it, I have to go. I don't want to run over your feet, so get out of my way.”

“No, no, you don't understand. There's so much that's worth experiencing, especially before a storm. The colorsâ¦you've got to see them. You never really see what's right in front of your face. You never sawâ¦me.”

She was staring at Web, completely confused and dismissive.

“Sheila, you
are
going to see the sunrise.”

Web tossed the floodlight into her car, then reached for her. Real alarm rose in her eyes as she read something in his.

She tried to hit the button to roll up the window. Too late.

She hadn't expected the strength in the hands that curled around her wrists. She gunned the engine, but she'd put the car in Park.

“Dammit, what is the matter with you? You can't make meâ”

Web got the door open and forced his way in, shoving her aside.

She started to scream.

But there was no one there to hear.

No one except for the mosquitoes that buzzed so annoyingly in the darkness, the night owl, the mangroves, the stars cast in the velvet sky and the sea breeze that drifted over the island.

And Web. But he didn't care. He just smiled, and within seconds, he had her silenced.

He was determined that they would share the coming of dawn.

Eventually the sun rose against the morning sky, the colors brilliant, despite the billowing clouds of the coming storm. Soon, soonâ¦the rains would begin.

Her eyes were fixed on the horizon.

For once, she didn't argue. She just stared.

“You are as beautiful as the sunrise, Sheila,” Web told her. “And I won't take long. I just want a picture or two.”

The camera was a Polaroid. Instant gratification. He only had a few minutes to lingerâ¦to see the light, the shadows, the colors of this world.

The time had come. The scene had been set. The plan had been meticulously made.

But there was more to do, and he had to take care. The task must be completed, nothing left undone.

And so Web began.

Later the sun was full up, and Sheilaâ¦had moved on.

Anticipation filled Web's soul. Delight, glee, that each detail of the night and the dawn had come to such perfect fruition.

Patience. Web had to practice patience.

There was nothing left to do but waitâ¦and watch as the plan unfolded.