Read Identity Theft How to Protect Your Name Online

Identity Theft How to Protect Your Name 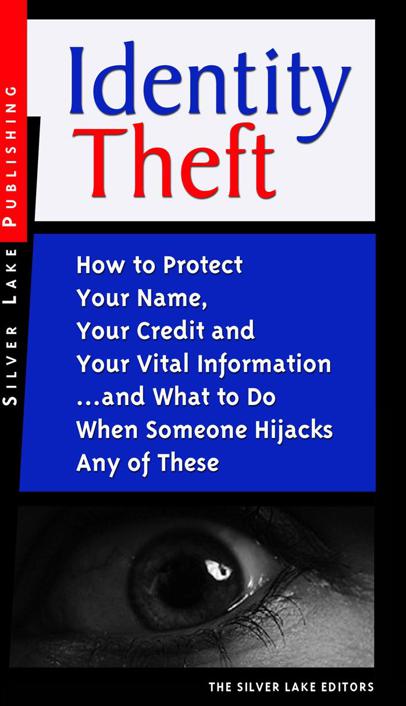 How to Protect
Your Name,

LOS ANGELES, CA ABERDEEN, WA
Identity Theft
How to Protect Your Name, Your Credit and Your Vital Information…and What to Do When Someone Hijacks Any of These First edition, 2004

For a list of other publications or for more information from Silver Lake Publishing, please call 1.888.638.3091. Outside the United States and in Alaska and Hawaii, please call 1.323.663.3082. Find our Web site at
www.silverlakepub.com
.

All rights reserved. No part of this book may be reproduced, stored in a retrieval system or transcribed in any form or by any means (electronic, mechanical, photocopy, recording or otherwise) without the prior written permission of Silver Lake Publishing.

The Silver Lake Editors who have contributed to this book are Kristin Loberg, Steven Son, Megan Thorpe and James Walsh.

This is the 12th title in Silver Lake Publishing’s series of books dealing with risk and insurance issues.

Throughout this book, we refer to insurance policy forms and legal decisions from the United States— but the discussion about risk and insurance can apply beyond the jurisdiction of the courts cited.

Most importantly: Identity theft is a phenomenon that’s still developing. The legal precedents and insurance forms involved are in relatively early stages. Expect both to change as ID theft becomes a more familiar topic to judges and actuaries.

This book is designed to give consumers a basic
understanding of ID theft and its legal and financial
effects. However, if you’ve been the victim of ID

theft, consult with law enforcement agencies or an
attorney in your area before taking any legal action.

CHAPTER
WHY ID THEFT HAS

BECOME SUCH A
PROBLEM

Imagine getting a knock at your door one evening while you’re having dinner with your family. When you open the door, two federal agents and a local cop stand on your doorstep
ready to arrest you
.

The police have the wrong person. You’ve never even seen cocaine in your life. But it’s going to take hours…maybe days…to straighten everything out. In the meantime, the Feds have banking records with your name and Social Security number on them that say you’ve been a drug dealer and money launderer for several years. You’re handcuffed and shoved into the backseat of a policecar while your kids cry on the front lawn. And—despite your alleged drug wealth— you can’t post bail to get out that night.

Identity theft has become the fastest-growing crime;
over 40 percent of all consumer complaints in the
U.S. involve identity theft. ID theft will cost U.S.

Being dragged off to jail in front of your family may not be the worst that could happen. There you are— in jail for three days while you prove that the person committing all the
crime in your name
isn’t you.

But, once you get out of jail you still
live in fear
of getting arrested again and again.

Meanwhile, your imposter continues to use your identity to commit crimes and no one seems to be helping you find this crook and prosecute him. When you try to correct your criminal record, you run into several stumbling blocks. So, you contemplate a name change.

But it’s not so easy. It becomes your word against a database. To people who work with the database, you’re a criminal—guilty until proven innocent.

Another scenario: A man quits his job in the hopes of finding a more rewarding career, only to learn that he can’t get another job because his cousin had been arrested years earlier and had used his name in the arrest.

Terrance Summers worked as a Baltimore correc-tions officer for 17 years, then tried to start a new career. But he didn’t get far. As soon as he applied for new jobs, he discovered that he had a criminal record; prospective employers found several drug felonies on his record. What had happened? His cousin Earl Anthony Thomas had given his name in 1987 when arrested on felony drug charges. This put Summers’s name on the record, above his cousin’s fingerprints.

When Summers turned to Baltimore’s district
attorney’s office, he learned the hard truth: Once a
person’s name is entered into a criminal justice database, it’s not easy to get it purged. And, once
someone’s name is attached to a set of fingerprints—
as Summers’s name was linked to his cousin’s—it’s
very difficult to change.

For Summers, the experience caused a
financial crisis
. Unable to secure a job and an income, he lost his fiancée (who left him due to the financial pressures), burned through his retirement money and lost his capacity to make ends meet for his 10-year-old daughter. Getting justice was going to be tough. His cousin, the man responsible for the trouble, had died in 1994.

Some victims of ID theft find that their names have
been misused after police stop them for a traffic
violation and discover that there is a warrant for
their arrest. There are also times when an innocent
person receives a summons to appear in court to
answer for a criminal act.

When cases like this reach the Baltimore D.A.’s office, the prosecutors investigate the stories and usually start with a fingerprint search. If a mistaken identity claim checks out, the prosecutor writes a letter stating that the victim has not been convicted of the charges on his record. That is all the office has the power to do.

But for people like Summers, that’s not always enough to convince prospective employers who find criminal charges during background checks.

There’s nothing new about criminals using aliases
to evade the law. But the sudden increase in identity
theft and the availability of stolen digital dossiers
on innocent victims makes it too easy for criminals
to get arrested and booked under a fake—possibly
your—name. Once police have booked a suspect under your name, you could be plagued for life.

Identity theft is not just about getting falsely accused of crime or living with serious marks on your criminal record (now that you have one!). ID theft covers a
wide range of issues and crimes
. It goes from the trivial to the outrageous. From jail houses to coffee houses.

Most people don’t think or worry about ID theft until they’ve become a victim. By then, it’s often too late to prevent the situation from worsening before it gets better. A typical victim spends an average of $808

and
175 hours over almost two years
cleaning up after an ID theft incident.

ID theft happens when someone
steals a piece of
personal information
about you and uses it to commit a fraud in your name. The thief might steal your Social Security number, name, date of birth, credit card information, bank account numbers, mother’s maiden name, etc., and use these things to: •

Change the mailing address on your current credit cards; •

Establish a new identity; and/or •

Apply for a mortgage, car loan or cell phone.

Once someone assumes your identity to get credit in your name and steal from businesses, you probably won’t realize it happened until months later. Federal law limits a consumer’s liability for credit card fraud to $50 per account. Visa and MasterCard have adopted zero-liability policies, but the real problem remains in the
clean-up of your credit report
.

According to a survey conducted by Privacy Rights
Clearing and the California Public Interest Research
Group, victims spend from $30 to $2,000 on costs
related to identity theft, not including lawyer fees.

And don’t think that ID theft is only a hassle for adults.

About 2 percent of identity thefts involve a child’s Social Security number. Parents should check their
children’s credit history
reports as they would their own for signs of theft. If your child receives mail, like unsolicited credit cards or pre-approved applications, this may point to someone assuming your son’s or daughter’s identity to establish credit.

Identity theft is the
fastest-growing crime
in America.

And it extends across borders and involves other parts of the globe. The Federal Trade Commission (FTC) estimates that 10 million people were victims in 2002.

Determining the exact scope and financial impact of identity theft on people and businesses is hard. There’s been disagreement over what defines identity theft (e.g., does a one-time joyride with someone’s credit card equal identity theft?) and it’s hard to calculate the impact when many incidents go unreported and it can take years for a series of incidents to be tracked and calculated.

The lack of a central command post for dealing with ID theft—it often involves local, state and federal offices—makes it difficult to understand the problem clearly. This
mechanical challenge
caused early government statistics to underestimate the numbers.

In 2002, the General Accounting Office (GAO) released a year-long study that found that complaints
of identity theft to the FTC were up 33 percent and
the Social Security Administration had a 500 percent increase in allegations of Social Security number fraud. According to the FTC, victims lost $5 billion due to ID theft in 2002. Businesses lost close to
$50 billion dealing with the problem.

ID theft can be extremely
lucrative for criminals
. A clever thief can walk away with over $10,000 per victim. Other facts about ID theft released by the FTC in a survey: •

About
half of victims
do not know how the identity thief obtained their personal information. Nearly one out of four victims said their information was lost or stolen—including credit cards, checkbooks, Social Security cards or stolen mail.

One out of 25 of those surveyed said identity thieves misused their personal information to
evade law enforcement
, such as presenting the victim’s name and identifying information when stopped by law enforcement authorities or charged with a crime.

The Identity Theft and Assumption Deterrence Act of 1998, which made identity theft itself a crime, designated the FTC as the central storehouse for identity theft complaints.