Read If You Were Mine Online

If You Were Mine 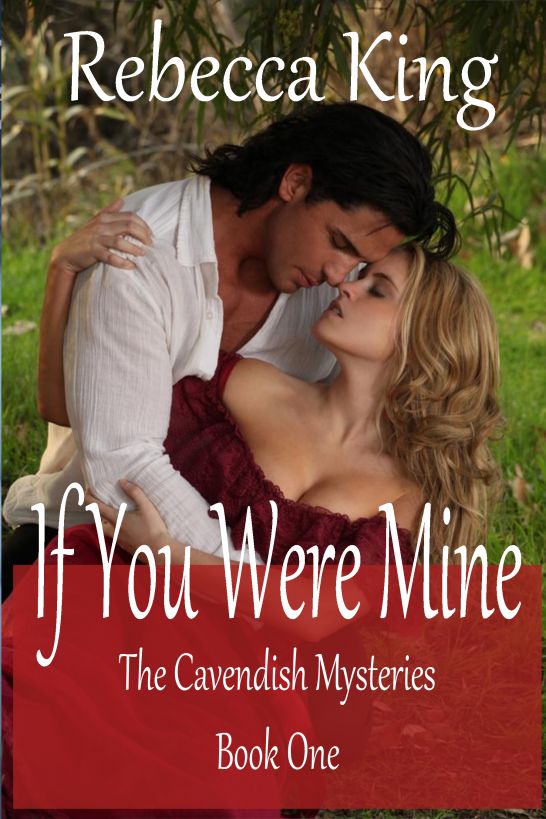 IF YOU WERE MINE

If
You Were Mine

Isobel
slowly closed the bedroom door behind her, wincing as it squeaked
loudly in protest. In the silence of the midnight hour, the noise
was loud enough to wake the entire household. She waited for
several long moments. Her heart thumped heavily in her chest. She
was certain that any moment now she would hear the heavy boots of
her uncle stomping down the hallway towards her, his face mottled
with rage at being disturbed at such an ungodly hour, all too ready
to give her another sound thrashing for simply being
alive.

Her
stomach lurched with a wave of nausea at the thought of the beating
she would get if she was caught outside of her room, on the
darkened landing.

‘
You can’t allow nerves to get the better of you now! Not with
the only chance of escape possible at last, and freedom just a
short, albeit nerve racking to journey across the upper hallway,’
she silently chastised herself.

She
stood shrouded in inky blackness, and tried to quell the rapid
thundering of her heart. With each passing moment that the midnight
air remained blessedly undisturbed, her tension began to
wane.

It had
only been a few scant minutes since Kitty had appeared at her
bedroom, yet Isobel already felt a lifetime older. Her stalwart
maid had taken a considerable risk to offer Isobel the opportunity
to escape the harsh cruelty of her uncle, and take control of our
own future. Dear Kitty, who was now strapped, battered and bruised,
to a hard wooden chair - as Isobel had been - a prisoner in the
room behind her. Isobel shook her head remorsefully and considered
the past few minutes, when her life had taken yet another
astonishing twist.

“
His manservant was boasting just this Eve’ that ye be gone in
the morning to be wed and taken off his hands,” contempt laced
Kitty’s voice. “He has sold you Miss, to one of his old crones if’n
you please! A Bertram DeLisle, I think he said. If you refuse to go
with ‘im on the morrow, you know what will happen!”

Isobel
knew exactly what would happen. She shuddered against a wave of
terrified revulsion. It would be the same thing that had happened
every single time her uncle got into one of his rages. The bruising
was deep and plenty; the cuts raw and painful. Isobel knew that
Kitty would not be allowed up to tend to her battered flesh
afterwards. She was very aware that lately, her uncle’s rants had
become increasingly ferocious, until Isobel had begun to fear she
could actually survive his next ‘lesson’.

“
Please, mistress, you must leave tonight! Now! You have to do
this!” Kitty pleaded in a voice that, although kept low for fear of
discovery, lost none of its urgent insistence.

Isobel
nodded jerkily in agreement. Her mind was unable to focus on
anything apart from the wild possibilities that began to unravel
before her in a confusing, and terrifying, jumble. She couldn’t
absorb the import of Kitty’s outrageous suggestion. Was it really
that simple? Her hands shook with a mixture of giddy elation, and
sickening nerves, as she considered the enormity of what she was
about to do. Could she really take the branch of freedom that was
being so readily offered to her? Apart from her uncle and her Aunt
Elspeth, she had only a handful of surviving family members living
miles away. She felt like she had buried most, if not all, of those
who were nearest and dearest to her over the course of the past few
months, until there was hardly anybody left to care.

With no
protector or guardian likely to come forward and challenge her
uncle’s claim to guardianship, Isobel was well and truly stuck in
the daily hell she had been cruelly drawn into since her brother’s
death.

There
had been only man, besides her brother, whom she had once
considered someone she could trust. But he had unfortunately proven
to be as duplicitous as her conniving uncle downstairs.

She had
given her heart and body to Dominic Cavendish, Lord Havistock, oh
so foolishly. Despite his initial gentlemanly restraint, he had
taken everything she had innocently offered, before promptly
leaving her to walk up the aisle with another woman. If the gossip
was indeed accurate, he had married his new wife within days of
leaving Isobel, and was already in the process of setting up his
nursery!

“
Damn you to hell, Dominic!” Isobel muttered, cursing her own
folly.

Quickly
closing off the painful memories of him, she turned her thoughts
back to her current predicament. ‘There was certainly nobody else
in life, other than Kitty, whom you should consider,’ Isobel
thought bleakly. ‘You are well and truly on your own now, so get
used to it.’

The stark reality of her situation was raw. But what shall I
do? Where should I go?
Trying
desperately to quell the growing hysteria, Isobel
took several deep breaths to try to calm herself down, and think
rationally. She was suddenly so very glad for the reassuring
presence of the woman before her. For the time being at least, she
wasn’t completely alone in the hideous situation she was
in.

“
Please Miss, you have the pouch of coins Master Peter left
you with?”

Isobel
nodded hesitantly, and swallowed against the lump that had formed
at the thought of her elder brother.

“
Then you must take it. Or what’s left of it. You must leave
now, since they will take you on the morrow, and I fear for your
safety - your very life - should you go with them.”

Isobel
closed her eyes as the mental image of the short, florid faced,
elderly man popped into mind. The memory of his green eyes roving
lasciviously over her the last time they had unfortunately crossed
paths, was simply vile. The thought of being married to such a
creature, and subjected to God knows what, left her quaking in
fear.

“
Miss, hurry up!” Kitty’s abrupt shake of her shoulders
snapped her out of her daze.

“
Oh yes, Kitty,” Isobel whispered, fighting the clawing panic
that threatened to overwhelm her. “Of course, I will go
now.”

Isobel
watched as Kitty hurried to the linen closet and began to pull out
the few scraps of clothing her uncle had allowed her to keep.
Everything had been used repeatedly since her arrival at the house
several weeks earlier and were soiled beyond redemption, but they
were all she had.

Giving
herself a stern mental shake, Isobel moved to the bed and quickly
began to sift through the assembled garments. “Wait!” Isobel
frowned down at the meagre pile of cloth. “I can’t take these! I
have no way of carrying them. I will travel quicker if I don’t
carry anything.”

Isobel
deliberately blanked out the gnawing doubt that continued to grow,
and defiantly sat down on the edge of the bed, tugging on her only
walking boots swiftly.

“
Miss, I have relatives in Coniston up in the Lakes. They will
not be able to keep you for long, but they will be able to give you
somewhere warm and dry to stay until you can decide what to do. You
just get yourself there. However best you can.”

Isobel
could hear the doubt in Kitty’s voice, but chose to remain
silent.

“
You tell them Kitty sent you, all will be well. Ask for
Annie, she is my cousin. She works at Winheld Hall.”

“
Right, Winheld Hall in Coniston,” Isobel whispered softly
with a tiny shake of her head. The words swam around Isobel in a
hazy fog, and she considered the enormity of the task before her.
She had never even been allowed out on her own unchaperoned before,
and yet here she was discussing with her maid setting out alone in
the middle of the night, with nothing more than a few coins in her
pocket and a handful of clothes on her back.

Isobel
looked down the leather pouch of coins thrust into her palm. “These
are your life savings Kitty; I can’t take these!”

“
Please Miss! When you are safe, you may get the coins back to
me somehow, but first you must get out of here.” Kitty didn’t
bother to inform her mistress of the rest of the manservant’s vile
boasts about the exact nature of the future that lay in store for
her, as the wife of a profligate gambler and lecherous beast. “Tie
me up,” Kitty added, ignoring the startled gasp from the younger
woman.

Isobel
looked down at the torn strips of stockings Kitty was holding out
to her. Although she understood that it was the only way she could
ensure Kitty would not be punished for helping her, Isobel couldn’t
prevent the surge of horror she felt at the thought of inflicting
pain upon another person.

“
If Rupert does punish you Kitty, and throws you out on your
ear, you must make your own way to Coniston. I shall await you
there. Do you have enough funds yourself?”

“
Don’t you worry about me Miss, I can get myself there,”
Kitty’s eyes shone defiantly in the darkness. “Just make sure you
aren’t caught.” The stern tone of her voice clearly reminding her
mistress of the consequences to them both should she get caught.
She took a seat on the rickety wooden chair in the centre of the
room, and waited while Isobel quickly tied the makeshift straps to
Kitty’s wrists.

“
Hit me, and make it good,” Kitty whispered with a hard glare
of warning.

“
What?” Isobel squeaked, suddenly feeling sick. Having such
first-hand experience of what it was like to be the recipient of a
fist, she loathed to inflict it upon another. “No!”

“
You must, otherwise he will know it is a set up. If you
really do not want me to get caught you must make it look real. Hit
me, it is alright.” Kitty’s voice hardened in anticipation. “Make
it good.” Her own safety depended on Isobel’s
compliance.

Tears
pooled in Isobel’s eyes as she stared aghast at her maid for
several long moments. Closing her eyes, with a silent prayer
heavenwards, she raised her hand. Tears streamed down her cheeks at
the sound of her hand meeting the other woman’s cheek. For several
moments, she stood and wept, the hollow sound of her hand meeting
flesh echoing in her ears with too much familiarity.

Isobel
couldn’t see how much she had marked the older woman through the
darkness, but could see the dark tell-tale trickle of blood coming
from the corner of her mouth.

“
I am so sorry Kitty,” Isobel muttered, wishing she could undo
the ties and give the woman a hug.

“
Get out of here. Now!” Kitty’s voice was harsh in the still
of the room.

Swiping
the dampness from her cheeks, Isobel sniffed and nodded before she
turned away. Carefully drawing her only remaining shawl tighter
around her shoulders, she turned towards the heavy wooden door to
the room that had been her virtual prison for the past two
months.

Through
the gloom of the darkened bedroom, Isobel glanced backward,
wordlessly seeking reassurance of her only ally. With a quivering
quirk of her lips, she accepted the encouraging nod Kitty gave her,
and disappeared into the darkness of the upper hallway.

The World According To Garp by John Irving
French Silk by Sandra Brown
The Man in the Queue by Josephine Tey
Marked by Death (The Godhunter, Book 4) by Sumida, Amy
Firebirds Soaring by Sharyn November
Village E3: Survival of the Human Spirit by James Holler
The Language of the Dead by Stephen Kelly
The Wolf of Wall Street by Jordan Belfort
Dark of Night - Flesh and Fire by Jonathan Maberry, Rachael Lavin, Lucas Mangum
A People's Tragedy by Orlando Figes