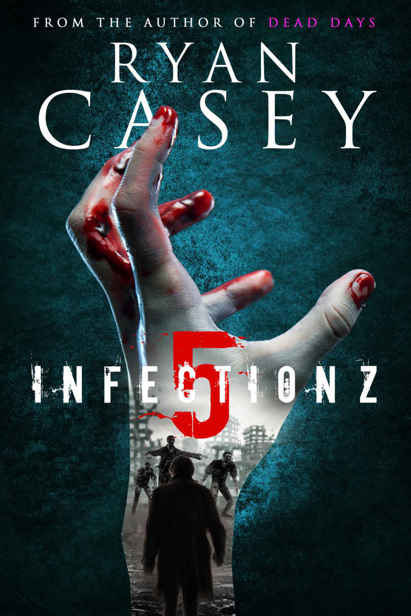 I
f you want
to be notified when Ryan Casey’s next novel is released and receive an exclusive free book from his Dead Days post apocalyptic series, please sign up to his mailing list.

Y
our email address
will never be shared and you can unsubscribe at any time.

I
nfection Z
5 is the fifth book in the Infection Z series.

If you’d like to read the first books, visit here:

M
artha never liked letting
her daughter down, especially after all the horrible things that poor girl had been through already.

But sometimes, just sometimes, those moments in life arrived where you were left with no real choice but to put your priorities on hold. Where you had to walk away from the people you cared about most, just for a few moments, as hard as it was to do.

She looked over at the door of her house. She’d been living in here for three months, ever since her arrival at New Britain. A decent little two-bedroom place where she and Amy were happy together. At least, she thought Amy was happy. It was hard to tell whether a ten-year-old kid was happy at all or not. Hard to know whether you were getting things right or wrong.

Didn’t help that they were living amidst the backdrop of a zombie apocalypse, either.

But Amy
seemed
okay. She
seemed
to be coping.

And in the end, that’s all Martha could ask for.

“I won’t be long,” Martha said, walking across the wooden floorboards towards Amy.

Amy’s head was lowered. Her dark hair had grown right out over her ears. She always had her hair shorter, but she seemed to be enjoying the change living in this place. Couldn’t blame the kid. “I thought you said we were making pancakes.”

Martha put a hand on her shoulder. “And we will. I won’t be long. I promise you.”

“You said we could make pancakes because we missed pancake day this year. You promised.”

Martha bit her lip. She didn’t like telling Amy off. Didn’t like giving her a hard time. After all, the girl had been through a lot. She’d seen people die. Watched people get torn to pieces right in front of her. It was only natural for her to be a little ill-behaved.

It was just hard to know how to discipline a child who’d been brought up in this world.

Martha crouched opposite Amy. She took her small, warm hands in hers. “Look at me.”

After a few moments’ hesitation, Amy lifted her head. Her eyes were a rich shade of brown. Whenever Martha looked at her daughter, she saw Newbie staring back at her. It used to scare her at first, seeing her ex-husband. The father that’d never really got a chance to bond with his daughter.

“Mummy’s got to check on something really important,” Martha said. Her lips tingled when she said the words. The memory of the note she’d received through the door while she was taking a shower replayed in her mind, the excitement engulfed her to the core.

Martha smiled. She stroked the side of her daughter’s arm. She always had been a skinny kid, but she actually seemed to be putting on some weight since reaching this place. Putting on weight at the end of the world. That had to be a positive. “You don’t want to come down to the labs, do you? I know how boring you find it down there.”

Amy tilted her head from side to side like she was weighing up Martha’s question.

“Anyway, if you stay here and keep an eye on the house, Mummy might just bring something back for you.”

She had no clue really. She wondered when Amy would reach the age when she realised that false promises were just that: false. Improvised.

“I’ll be back in an hour, tops. And hopefully… hopefully with some good news.”

Martha’s stomach tingled. She re-read the words on that note in her mind. If it was true…

No. She couldn’t believe it was true. Not until she saw for herself.

She smiled back at her daughter. “It’s part of the surprise.”

“What if the zombies get inside?”

Martha stopped turning the handle. Amy’s mention of the zombies made her heart sink. “We’ve spoken about this.”

“But what if they get in this time?”

“Amy, they can’t get in here, sweetheart—”

“Your dreams aren’t real,” Martha said. She realised her words sounded sterner than she’d intended. But she had to be a little hard on Amy. She’d been paranoid about the zombies getting inside the walls of New Britain ever since they’d got here. They’d had minor incidents, sure, but they mostly concerned people going out on scouting missions, or funny turns while standing at the top of the wall.

But there hadn’t been any cases of zombies getting inside the walls.

“One hour,” Martha said. “Maybe not even that. Then I’ll be back. And remember what I told you to do if anything
does
happen?”

Amy lowered her head. “Hide under my bed.”

She went back over to her daughter, kissed her on the head.

Then she walked to the door and stepped out into the fresh July air.

S
tepping
out into New Britain was always a peculiar experience, even three months after arriving here.

She walked down the steps of her house and onto the road. On either side of the road, there were more houses. Terraced houses. In front of them, gardens. In the windows, there were toys. In some windows, people. People living normal lives. People sitting outside sipping glasses of water, bottles of beer. The sound of laughter from children playing in their backyards, kicking footballs against the walls. The smell of barbeques sizzling in the distance.

A normal life. A normal existence.

If it wasn’t for the walls around them, towering above, constantly reminding them of their cocooned existence.

Martha hurried down the street. She wasn’t sure how long ago the note had been pushed under her door exactly. But she knew she didn’t want to wait any longer to find out if those words were true. She saw a neighbour, Fred, open his front door and step out. He waved at her, started to say something, but Martha just turned and pretended she hadn’t seen him. She didn’t want to be rude to Fred. Didn’t want to make out he’d offended her or anything like that.

She just wanted to get to the labs.

She walked past the memorial garden. And when she looked at it, she saw people sitting on the grass eating picnics. She saw all signs of life.

And then she saw Hayden’s memorial right in the middle.

The memorial to the man who liberated New Britain. Who sacrificed himself to prove to these people that there was another way of life—a better way of life.

What if the note was true?

What would it mean?

She reached the doors to the labs. The building itself wasn’t as fancy as you might expect a “lab” to be. She climbed the steps. And as she moved up them, she remembered what Amy said to her.

“What if the zombies get inside?”

For some reason, it made Martha’s skin crawl. It made her think back to Riversford, and their time spent surviving. It made her think of when Daniel and his people arrived dressed in black suits, crosses around their necks, with those looks of confidence and certainty.

It made her think of the box…

She knew the contents of the box were special all along. She knew they meant something. But there’d still been uncertainty about her discovery.

After all, how was one supposed to react to what she’d seen?

She stepped inside the labs. Walked towards the first door on her right. The receptionist, Jenna, nodded at her as she entered, like she was already expecting her.

Martha picked up her pace. Her heart pounded. She could feel her pulse bobbling in her throat.

She remembered what she’d seen when Daniel opened that box.

A zombie. Strapped down. Groaning. Trying to writhe its way out.

Not until Daniel told her who this man was.

At that moment, everything changed.

And all this time, she’d wondered if she was mad. If she was completely insane. If all of their studies were going to waste.

She went to walk through the next door when she bumped right into Daniel.

“Martha,” Daniel said. His smile was wide; even wider than that day they’d first met. He was tall and dressed in that same priest-like outfit that he always liked to wear. He smelled of aftershave.

Daniel’s smile widened. “See for yourself.”

If it was true, this changed everything.

She turned the corner. Looked through the glass.

When she saw the scene in front of her, she almost collapsed to her knees.

The memories came flooding back. The memories of that zombie strapped down in the box. Only recently turned. Only a few hours infected.

Martha put a hand to the glass and stared into the room, over to the bed.

And then the memories of the zombie slowing down.

The memories of its eyes fading even more than they already had.

The memories of it stopping.

And then a light illuminating in the zombie’s eyes.

No. Not the zombie’s eyes.

That man didn’t last long. He didn’t survive long after the reversal of his infection. His wounds were too bad. And that turned out the case for everybody. To be infected, you had to have a wound. You had to have enough of the infection running through your bloodstream in a high enough concentration for the reversal to work.

They had the news. They had the cure. Accidental. A combination of an initial dose of the virus, amongst many other antibiotics and natural antibodies. The combined efforts of months of pre-infection research from Daniel, his team of scientists.

They had a vaccination.

But they hadn’t been able to turn anyone long enough for them to stay alive.

They hadn’t been able to turn anyone because the wounds always killed them in the end.

And they especially hadn’t been able to turn anyone who had been infected a long, long time ago.

Martha stared through the glass, Daniel by her side.

Hayden McCall turned his head and looked right into her eyes.