Read Invasion: A Sequel to The Last Princess Online

Invasion: A Sequel to The Last Princess 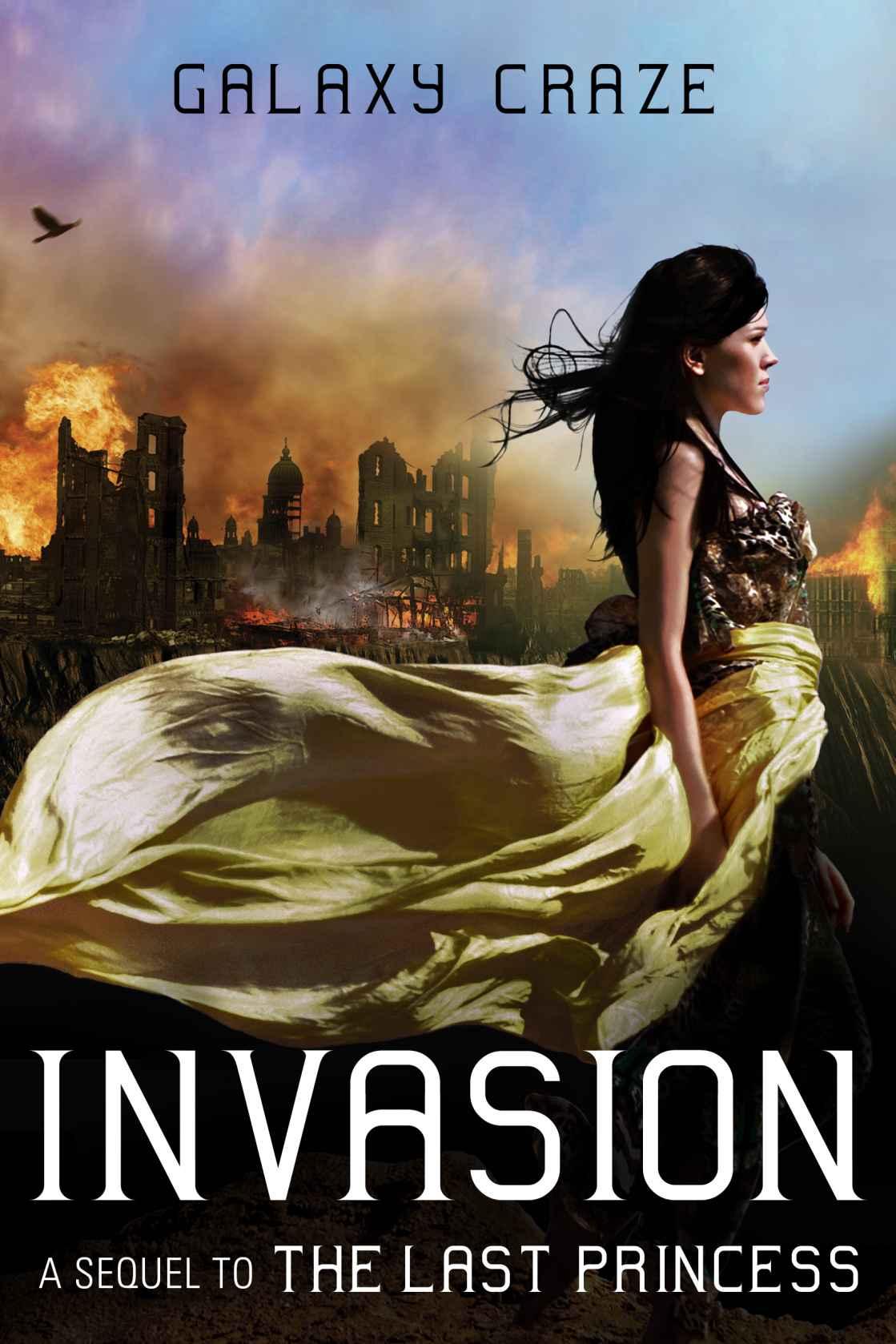 The Last Princess: Invasion
© 2014 by Alloy Entertainment and Galaxy Craze

All rights reserved. No part of this book may be reproduced or transmitted in any form or by any means, electronic, mechanical, photocopying, recording, or otherwise, without prior written permission of Alloy Entertainment. If you would like to use material from the book (other than for review purposes), write to
[email protected]
.
The publisher does not have any control over and does not assume any responsibility for author or third-party websites or their content.

The dogs woke me.

I sat up in bed, startled by the sound of their barking. Next to me, Wesley shifted slightly but kept sleeping, his breath slow and even, the hint of a smile on his face. I moved carefully, so as not to wake him from what must be a good dream, and tiptoed out into the hallway to check on the dogs. It was probably nothing, a mouse skittering across the snow or a branch falling in the forest. But I still wanted to be sure.

And then I saw it through the window. Footprints, unmistakable in the fresh snow.

I stepped forward, rubbing at the foggy glass with my sleeve to get a better look. A trail of footprints led from the snow-covered forest all the way here, their outlines shining in the moonlight. A gust of wind rattled the pane and I could feel the cold draft against my nightgown, but I didn’t move. I stood frozen with my hands gripping the sill, my bare feet numb on the cold stone floor, able to think of only one thing. Someone had found us. Someone had tracked us to this cottage, and stood right outside our window, looking in at us.

It had only been a year since the defeat of the evil dictator Cornelius Hollister, but it felt like a lifetime. Now my sister Mary had assumed her rightful place as queen, and thanks to her rebuilding efforts, England was on the mend. Organized crews were repairing roads and cities that had been destroyed since the Seventeen Days. Seeds were distributed and crops replanted. Children were back in schools. And through it all, Wesley and I had stayed away, living alone in this thatch-roofed cottage, deep in the forest.

I stepped back from the window, my heart racing. Faint red embers glowed in the fireplace. I held my hands near it to warm them, trying to think. Whoever those footprints belonged to wasn’t a friend. Otherwise they would have greeted us, made their presence known. But who could have found us here, in a cottage so isolated no one even knew it existed? No one, I thought, except for Portia—Wesley’s sister.

My eyes darted around the cottage—the faded roses on our sofa cushions, the hardened wax on our kitchen table, our twin pairs of boots lined up against the wall. In the bedroom, Wesley was still peacefully snoring. I considered waking him, asking him
to come with me, but the snow was falling down hard now. If I didn’t move fast, I’d lose sight of those tracks for good. And if it was Portia, I wasn’t sure I wanted Wesley with me when I found her.

I felt a fear that I hadn’t felt in a long time. Wesley and I were happy here, living simply in this cottage that once belonged to his mother. After everything that had happened to me, to my family, all I wanted was to lead a quiet life with the boy I loved, to forget the responsibilities that came with being royal.

But someone had found us. And until I knew who it was, this life—this fragile peace—was at risk.

Two hunting rifles leaned against the wall next to the front door. I quickly slid into my coat, pulled on my riding boots, and took a rifle, checking that it was loaded before stepping outside into the cold. I blew a kiss to Wesley over my shoulder and then, with a deep breath, shut the door behind me.

My breath formed small clouds in the air, and my face and hands stung from the cold. I followed the tracks into the forest, keeping a tight hold on the rifle. The snow was coming up to my calves now, and fresh powder continued to fall. At the tree line, I paused to look back. My tracks were already almost invisible.

I was wrong; I couldn’t do this alone. I turned and headed into the stables.

“Caligula,” I whispered, stroking her nose softly. It was funny to remember that once upon a time, I had been
afraid
of Caligula. She was one of Cornelius Hollister’s warhorses: a full head taller than any normal horse, and bred for aggression. The first time I rode her, it almost killed me. But I survived, and slowly, she learned to trust me.

My fingers stiff with cold, I untied the dark green wool blanket that was covering her and slid the saddle onto her back. “We need to go for a ride,” I murmured. She tossed her head as if in agreement, following me obediently outside and standing still as I climbed on her back.

We followed the footprints deep into the woods. It was eerily quiet here, the vast snowdrifts absorbing every sound, so that I couldn’t even hear Caligula’s bridle jingling. The falling snow made it impossible to see more than a few feet ahead, so I kept my eyes down, following the footprints. They were getting fainter. I nudged Caligula forward, afraid we’d lose the trail before we figured out where it led.

But then Caligula stepped into a clearing, and my stomach clenched in a violent combination of shock and horror.

In the center was a deer carcass—but unlike anything I’d ever seen. Only its head and skeleton remained, its round brown eyes wide with terror. Its bones had been stripped completely clean, and its antlers sawed off at the base of the head. For several feet
surrounding it, the snow was stained a deep red, soaked with blood. And in the middle of the deer’s neck was a weapon I’d never even dreamed of. Some kind of giant fishhook, gruesomely piercing the flesh.

This wasn’t Portia’s work. Whoever it was, it was someone else—someone infinitely more frightening.

Caligula whinnied and retreated a few steps, clearly spooked by the sight. But I could see the boot tracks continuing on the far side of the clearing, and I didn’t want to turn back, not yet. “Come on, girl,” I said, giving her a swift kick. Caligula reared up in protest and took off into the woods at a gallop.

I leaned forward, pressing myself low to her back, weaving my fingers into her mane. The snow whipped angrily at my hair. I tried to curl my toes inside my boots, but I couldn’t feel them anymore.

If Wesley knew I was out here, chasing footprints in the middle of a snowstorm, he’d be furious—but it was for Wesley’s sake that I had to come. I couldn’t turn back now. So I did the only thing I could. I closed my eyes against the stinging wind, trusting Caligula to follow the footprints—after her years in Hollister’s stables, she was a better tracker than most hunting dogs. I didn’t open my eyes again until I heard the ocean.

We had run all the way to the coast.

Since the Seventeen Days—that terrible time ten years ago, when the world was battered by natural disasters until the sky turned black as ash and the sun itself began falling apart—the coastal villages had been living off the grid. Mary had done her best during the past year to restore electricity, but laying new power lines was not easy, and her efforts hadn’t reached this far. The biggest problem was still the lack of oil. Without it, England was struggling to figure out how to run cars, farm equipment, fishing boats. Without it, whole villages were unable to function.

Caligula had led me to one of the many abandoned fishing villages dotting this stretch of coast. Covered in snow and ice, it looked more like a cemetery than a place where people had once lived. In the storm, the waves were gray and angry, rising to a full twelve feet before crashing loudly on the shore.

I climbed down from Caligula’s saddle and took a step forward. The boot tracks ended at the water’s edge; I could see them up until where the icy waves had washed them away. The wind blew water into my face, so cold that each drop felt like a tiny shard of glass.

Shielding my eyes with my hands, I stared out at the horizon. The gray sky, roiling with the snowstorm, met the gray line of the ocean far out in the distance. But just there, fading into the horizon line, I saw a ship.

The heavy snow obscured my vision, but I knew what I was seeing. It was an enormous ship. A tanker.

I ran unthinkingly into the water to try to get a closer look, going in all the way to my waist before the undertow almost sucked me beneath the waves. I struggled to find my footing, shivering uncontrollably, and looked back out—but the ship seemed to have disappeared into thin air.

The snow continued to fall, flakes landing on the surface of the frigid water and melting in a swirl of white. I stood there for a few minutes, maybe more. I could still see the vast shape of that tanker on the insides of my eyelids when I closed my eyes. Those heavy boot tracks. The giant fishhook in the scavenged deer carcass.

Wesley and I were no longer alone. And neither was England.