Read Is It Wrong to Try to Pick Up Girls in a Dungeon?, Vol. 6 Online

Is It Wrong to Try to Pick Up Girls in a Dungeon?, Vol. 6 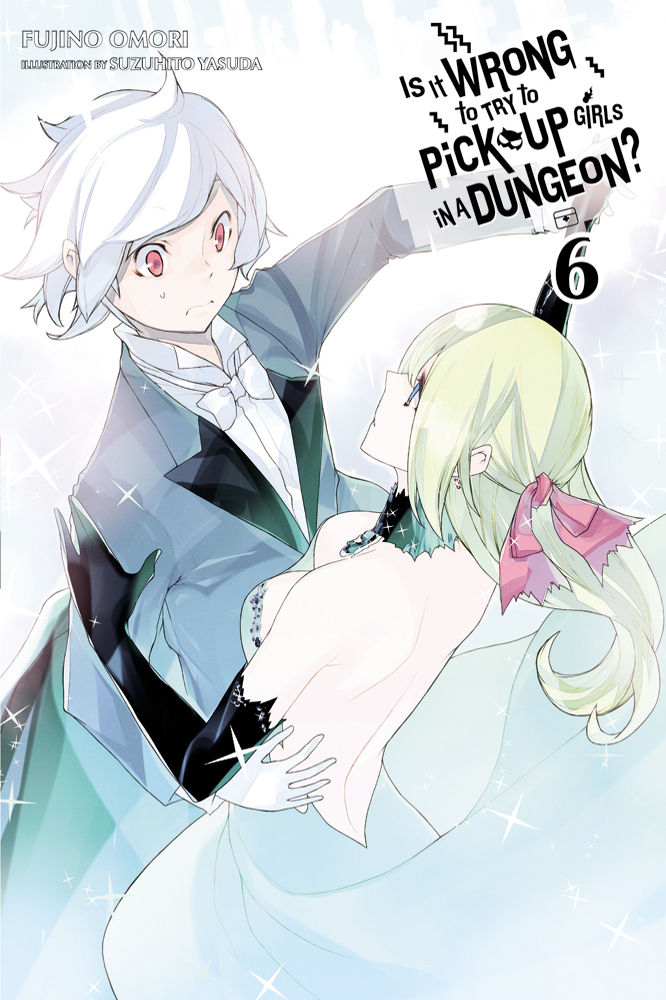 PROLOGUE
EVIL IN THE MOONLIT NIGHT

Weak moonlight filtered through the thin clouds that covered the night sky.

With the exception of a few stars twinkling here and there, the dark void overhead felt vast enough to draw earth-dwelling onlookers into its depths.

Most people were already asleep at this late hour.

Toward the middle of the city, the taverns were alive with the sounds of adventurers. However, in this dim residential area they sounded distant.

One girl kept to the shadows as she made her way into one of the buildings on her way to meet with a god.

“Please, Lord Soma. Allow Lilly to leave this
Familia
…” Her voice quivered as she pled.

Lilly’s body was hidden by a threadbare robe as she kneeled in front of him, her head bent low. Her round chestnut-colored eyes focused on one spot on the floor.

The deity she was talking to sat quietly in the corner of the room, holding his knees up against his chest.

A cloud shifted in the night sky, flooding the room with moonlight through the open window. The light illuminated a series of shelves lining one side of the room. They held numerous potted plants as well as several bottles of clear liquor. The two figures sat in the private quarters of the home of
Soma Familia
’s god.

Lilly had come here to ask Soma directly for permission to leave the
Familia
.

This was all so that she could be released from the curse of
Soma Familia
—so that she could stand next to Bell and the others with pride. She had seen her chance and seized the opportunity for a personal audience with Soma himself.

Leaving a
Familia
—which entailed the rewriting of the Falna that even then was carved upon her back—required the permission of her god, Soma.

“Lilly knows that this comes without warning, and she apologizes for that and for every other offense she has committed. But please, Lilly begs for your mercy…”

She did not make eye contact or even raise her head.

The girl’s small, quivering shoulders indicated just how much fear of her god still remained within her. Lilly couldn’t wipe away the memories of Soma’s wine, how it twisted her, overpowered her. The one who created it was sitting in the corner of the room.

But the deity did not respond.

He looked like a young man of average height. His body and limbs were slender and almost delicate in appearance. He wore a loose-fitting robe, the sleeves and hem dirty with soil.

Soma sat in the corner, looking at the wall and muttering to himself. “Operational regulation…Penalty…My passion, my reason…”

Soma’s long, unkempt hair partially hid his downtrodden face. He seemed to be shrouded in a miasma of depression and despair.

He did not stir, keeping his back to Lilly.

A new voice not belonging to Lilly or Soma filled the room. “Lord Soma is very busy right now. But I’ll listen to you, Erde.”

A human man appeared next to the deity sitting on the floor.

Glasses perched on the man’s chiseled features. His narrow black eyes had an air of intelligence, but the vulgar smile on his lips betrayed it. “I’m rather surprised to see you alive. I was informed that Kanu perished.”

Lilly desperately fought back the urge to respond.

Zanis Lustra—the commander of
Soma Familia
and an upper-class adventurer at Level 2.

He had been given the title of Gandharva, the Wine-Guardian. His mind was strong enough not to be manipulated by the Divine Wine; his will could overpower it.

With Soma’s notable lack of interest in his own
Familia
, it was not uncommon for Zanis to issue commands in his place. In fact, as the leader—and using the name of their deity for his own purposes—he could manipulate the other members for his own gain. Not unlike the man who’d thrown Lilly into a horde of killer ants, Zanis thought nothing of taking advantage of the weak.

After concealing her own death and making careful plans to sneak into Soma’s quarters, Lilly had been found by the one person she absolutely wanted to avoid.

“Come to think of it, haven’t seen any of Kanu’s buddies around, either…You have anything to do with that?”

The girl answered honestly to the man whose smirk hadn’t changed since he entered the room. “…Lilly doesn’t know.” Her response was curt and to the point. She fought hard to hold her tongue to prevent her own anger and annoyance from coming through. “Mr. Zanis…Lilly is here for a reason. She’s waiting for Lord Soma’s answer.”

“Oh yes, indeed. Let’s get back to that.” Zanis exaggerated his words and nodded his head much deeper than normal, almost as if he were acting in a play. He slowly and carefully enunciated each of his next words. “Of course, a large sum of money will be required to exit our group. That’s the only thing that can relieve Lord Soma’s pain—he’s spent so much time raising you. He’ll want at least ten million vals.”

Her spirit seemed to drain out of her body the moment that she understood Zanis’s words.

Soma didn’t turn or look up when he responded. The deity was little more than a rock in the corner of the room, not budging a celch.

Her own god didn’t know her, nor did he respond to her voice. Zanis chuckled darkly to himself as he stared down at Lilly, knowing that any further discussion was useless.

Lilly collapsed to the floor like a puppet whose strings had been cut. Her thin arms managed to break her fall. Slowly but surely, the girl climbed back to her feet.

Her face void of any emotion, Lilly stumbled her way out of the room on shaky legs.

The moment she disappeared from sight, a large figure stood in the doorway in her place.

“Very good, Chandra. Show them into the small room down the hall.”

The dwarf named Chandra spoke in a gruff monotone as he turned his back on Zanis, then disappeared down the hall as if to avoid a pointless conversation. The man shrugged his shoulders, more amused than annoyed.

He turned back to face the god in the corner and spoke. “Lord Soma, I will go conduct negotiations. What is your desire?”

His eyes seemed to hide a sneer as he walked toward the doorway.

Silence fell as soon as Zanis closed the door behind him.

The god stopped muttering to himself now that he was left alone in his room.

Bluish gray moonlight illuminated the plants and bottles on his shelf. Soma reached out, grabbed a bottle, and flipped open the lid.

He raised it to his lips and drank the bottle dry in a few quick gulps.

Give the Devil His Due (The Sanheim Chronicles, Book Three) by Blackwell, Rob
Crazy About Cameron: The Winslow Brothers #3 (The Blueberry Lane Series -The Winslow Brothers) by Katy Regnery
The Design of Future Things by Don Norman
Proof of Heaven by Mary Curran Hackett
The Elevator: A 21st Century Romance (Book 1) by Ashford, John
Maggie's Five ...the first in a LOVE story by Sandra Fitzgerald
The Wedding Wager by Regina Duke
Betwinx (Paranormal Erotic Romance Novella) by Lilah
5 People Who Died During Sex: And 100 Other Terribly Tasteless Lists Paperback by Karl Shaw
Faith Of The Dragon Tamer (Book 2) by Cole Pain