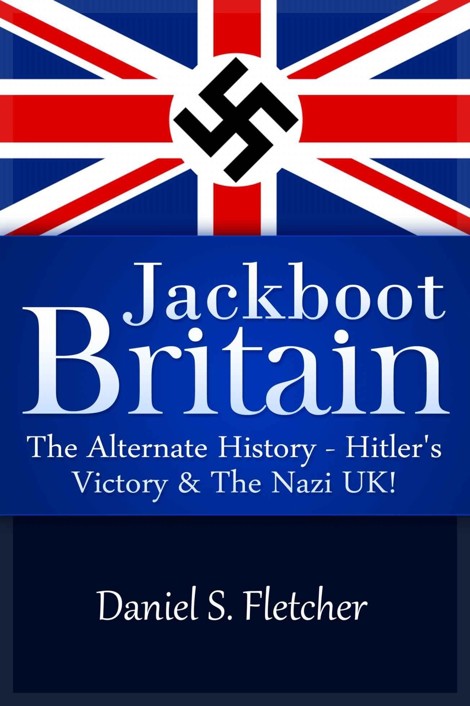 All rights reserved. No part of this publication and its content is to be distributed or copied without the express permission of the author, excepting brief quotations within the boundaries of fair use. Any unauthorised reproduction of the book or any material contained in it is prohibited. This work may not be reproduced, reprinted, photocopied or otherwise transmitted and distributed in any way – electronic or mechanical – without the express permission of its author.

The right of Daniel S. Fletcher to be identified as the author of this work has been asserted by him in accordance with Sections 77 & 78 of the Copyrights, Designs and Patents Act 1988.

This work is fictional, with May 1940 being the point of divergence; the German invasion of France occurs earlier in this narrative. The entire timeline thereafter is fictional. It consists of the following:

a) Real life occurrences, used in this fantasy context with a twist –
e.g.
Churchill’s ‘Fight on the Beaches’ speech, or the SS Einsatzgruppen, which were in active operation in Nazi-occupied territory.

b) Elements taken from German documentation, such as Hitler and Heydrich’s instructions for an occupied Britain, written SS orders, Wehrmacht orders, memos… including stated intentions and beliefs, sourced from Mein Kampf, the Goebbels diary, court testimonies, the findings of Nuremberg, the work of countless historians, Albert Speer’s account of his life, Walther Schellenberg’s richly detailed autobiography of life in Heydrich’s SD, The Protocols of the Learned Elders of Zion, etc…

Many of the characters were of course real historical figures, but while trying to correlate with reality as closely as possible regarding dialogue, stated views and actions, and the use of certain anecdotal stories, the depiction of all characters here is fictional.

This novel is based on an original screenplay that was drafted in Ibiza, Spain circa 2011, to which Steve Burdon (1971-2013) made several contributions. JB is dedicated to his memory.

Eternal thanks to my wonderful family in England – Maureen, Stephen & James; Brian & Vera; Elizabeth & Douglas – as well as Andrew, Max and Simon, and all the weird, wacky and wonderful characters who’ve shared the ride with me thus far.

Heartfelt thanks and gratitude to everyone who gives the book a chance. If you’d like to share any feedback, it would be fantastic to hear from you; please, by all means hit me up via one of the listed websites. Technology, eh?

Cheers, and have a wonderful day.

“
Hitler has grasped the falsity of the hedonistic attitude to life… because in his own joyless mind he feels it with exceptional strength, knows that human beings don’t only
want
comfort, safety, short working-hours, hygiene, birth-control and, in general, common sense; they also, at least intermittently, want struggle and self-sacrifice, not to mention drums, flag and loyalty-parades
… Whereas Socialism, and even capitalism in a grudging way, have said to people "I offer you a good time," Hitler has said to them “I offer you struggle, danger and death,” and as a result a whole nation flings itself at his feet.”

“Political language... is designed to make lies sound truthful and murder respectable, and to give an appearance of solidity to pure wind.”

“Over the World, rages war.
Earth, sea and sky wince at his roar.
He tramples down
At every tread,
A million men,
A million dead.
We say that we, must crush the Hun,
Or else the World will be undone.
But Huns are we
As much as they.
All men are Huns,
Who fight and slay.
And if we win, and crush the Huns,
In twenty years we must fight their sons,
Who will rise against
Our victory,
Their fathers’, their own
Ignominy.
And if their Kaiser we dethrone,
They will his son restore, or some other one.
If we win by war,
War is force,
And others to war
Will have recourse.
And through the World
Will rage new war.
Earth, sea and sky
Will wince at his roar.
He will trample down
At every tread,
Millions of men,
Millions of dead.”

The power of language – it can heal and build, or corrupt, poison, destroy, desecrate, annihilate…

Language has a power that can be beautiful, yet it is perverted with far greater ease; twisted sickly to ooze venom, spitefully inciting vicious, destructive thoughts… and rarely in human history has such nihilistic savagery been fostered, skilfully nurtured with unsurpassed malevolence, and ultimately unleashed in such epic magnitude for the greater ill.

While these unnatural, hateful men may use violence in place of debate, the ideals of a peaceful society with some semblance of brotherhood cannot merely be crushed underfoot
beneath an army of jackboots. Language will always remai
n, and retain its illimitable power. They cannot control language – at least in private – nor can they control thought, at least, not of the reasoned mind. Our thoughts are
ours
; it is our right to think thoughts, and to communicate them, and only Nietzschean criminals believe otherwise. And so, here are my own, for what they are worth.

My name is not important. I have a name; I am a person, a human being – despite what they might tell you – and I have a life, family, friends, feelings, emotions. None of that matters in the face of a new order of hatred; of rigidity and compliance, fear and rule by force. Hatred and prejudice does not care about names; not when fired up by the maleficient power of beguiling language, wickedly misapplied to lead a generation of humans astray, and obliterate any prevailing sense of empathy, humanism and brotherhood.

Language has been mobilised and sent into battle; it directs the human carnage of conflict with its enunciation of emotion, stimulating souls to abandon peace.

On one side, monstrous men with bloodstained hands; Hitler, Goring, Goebbels – savage puppetmasters; their calculated language stirring the mindless masses into bestial frenzy. On the other, the humanist scribes; men of the moderate-left, or the socialists and anarchists – for us, the rejection of bloodlust and war, and the supremacy of truth, altruism and advancement. There is no compelling argument against the three working concurrently. Of course, I cannot speak for the men whose talent far outshines my own, but at best I can assert; if language can be used to inspire thought, creativity and love, as opposed to the furtherance of suffering, let its power be harnessed solely for those ends.

At present, Europe’s hot blood thirsts for the destructive annihilation of combat. Linguistically; the calculated language of vengeance and fire holds more appeal for the dissatisfied soul than the calming composition of peace.

They of ambition; who stir tribalism and division and set brother against brother man for their own ends; they use language in its most evil, twisted form. Their modus operandi is to appeal to the lowest form of understanding, on a level I hesitate to allow for the term ‘human intelligence’ to be associated. It is the darkest abyss of psychology; the blackest recess of the soul, the realm of soulless men with machine minds.

Children, fertile minds ripe for molestation. Now they will be taught
what
to think, not
how
to think. Language, that twisted poison. It scars purity.

Extremism stifles true progression in all fields of human advancement; it is a detriment to everything but war, tribalism and the personal power of Nietzschean entities, striving only for the narcissistic vindication of their ego and will. The enlightened mind knows that all is challengeable, ergo questions all and thus, learns and grows; progression. The weak and narrow mind makes its beliefs sacrosanct; fearful of challenge, their creed becomes unalterable, defended with violence. Political extremists, much like religious zealots, are the latter. They destroy what they cannot convert. They annihilate those they cannot control, or force to conform. They have found no peace in life, no love, and so promote war and division, as emotional cripples – inflicting their own pain and misery and malignant stupidity on the world. Their language binds people together, but only by stirring the darkest excesses of the soul; language of hate, and intolerance, fear and conspiracy, and the need for vengeance. In war-scarred Europe, these cripples direct mass-psychology, and would make the world in their own likeness; mutilated by violence and tribalism and hate.

Men speak of God’s love for man… but if providence does not come in this hour, where is He then? My conclusion is simple. The Semitic texts from Bronze Age Palestine of which Christianity is comprised
still
fit uncomfortably well with contemporary life. The Old Testament depicts a God capricious and cruel; blood sacrifice, vengeance, genocide; death and destruction
et al.
Would He not approve of Herr Hitler and the brutal, tribalistic crusade against Hebrews and non-Christian ‘untermensch?’

One thing is inarguable. His church on Earth has produced some of the most vigorous and violent contribution to the European fascist cause.

It is synergy. Man Created God, even
if
God Created Man; it all exists in the hubris and apotheosis of the narcissistic soul, and alas, all too many of the human herd are willing to follow the beastly trait of leadership. The idea of self-emancipation and advancement, with Europe under the jackboot of fascism, would be Quixotic to the point of mirthless lunacy.

There will be a million and one accounts of what happened here… or perhaps, just one. I expect that the victors of force shall record its history; a forlorn hope, to leave behind a voice that seeks to shed light from the shadows of a vanquished perspective. From a tragically flawed viewpoint; a love of democracy, and the quaint notions of a franchised people, who – even under a plutocratic class – still enjoyed the freedom of civil rights and a Voice. In the new system, the individual human is judged differently, and is essentially worthless.
Only the collective matters
. Creativity and individualism, diversity, freedom, independent thought; all abstract notions, consigned to the Dustbin of History that another competing totalitarian system and quasi-religion so recently spoke of.

The legions are coming, and this time, not even Pindar will be spared. No poets, artists or thinkers shall be allowed to live in the conquered land if they retain their own thoughts.

Even if this is only for my benefit alone, I want to talk about how it felt. How it
feels
. What their hatred
means
.

It is a cruel system of control that – much like religion – demands submissive conformity; to do otherwise is to be the nail that sticks out; first to meet the hammer. And that hammer, its arrival imminent, is a black-clad army of death; the SS, and its vicious Gestapo.

These will be our masters; they whose capricious wills shall determine our individual fates. Britain’s civilised society will cease to exist, and our ethnicity and opinions will be judged to ascertain those worthy of life, and those unworthy, condemned to die – ‘
life unworthy of life
.’