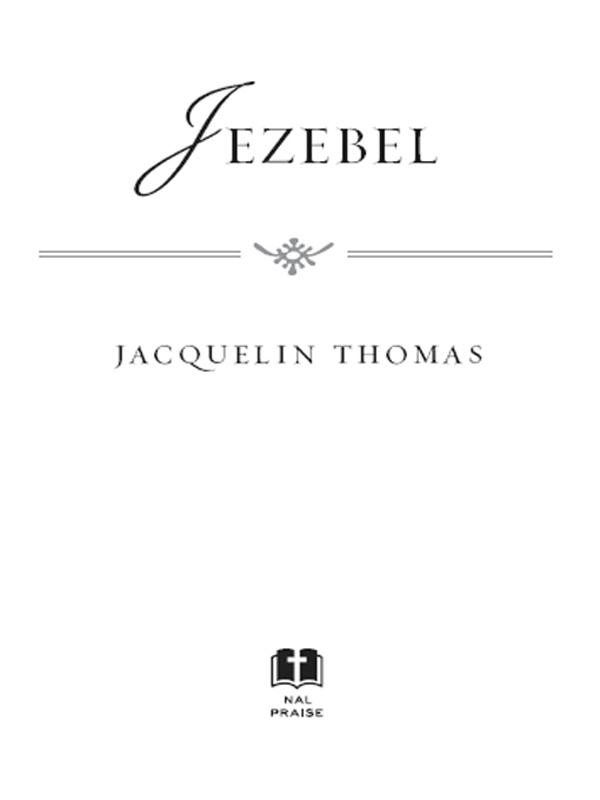 PUBLISHER'S NOTE
This is a work of fiction. Names, characters, places, and incidents either are the product of the author's imagination or are used fictitiously, and any resemblance to actual persons, living or dead, business establishments, events, or locales is entirely coincidental.
Â Â Â Â The publisher does not have any control over and does not assume any responsibility for author or third-party Web sites or their content.

The scanning, uploading, and distribution of this book via the Internet or via any other means without the permission of the publisher is illegal and punishable by law. Please purchase only authorized electronic editions, and do not participate in or encourage electronic piracy of copyrighted materials. Your support of the author's rights is appreciated.

I love you all!

And also concerning Jezebel the LORD says:
“Dogs will devour Jezebel by the wall of Jezreel.”

B
linding tears rolled down her cheeks, but Jessie Belle Deveraux was unable to wipe them away because her lead-laden arms weren't any use to her. She continued to sink deeper into depression.

I'm paying dearly for my sins
.

The thought reverberated through her mind over and over again, bringing on more tears.

I can't even wipe my own nose. Lord, please have mercy on my soul and take me out of my misery
.

Jessie Belle would prefer to have died from the fall that left her completely paralyzed to being imprisoned in a wheelchair with her life slowly draining away. She'd thought she'd made peace with her situation, but feeling the way she didâshe hadn't.

The nurse entered the bedroom carrying a stack of clean towels. She took one look at Jessie Belle and dropped them on a nearby chair, asking, “Mrs. Deverauxâ¦what's wrong?”

“I h-hate being like this, H-Helen. I c-can't even wipe m-my own nose,” she managed between sobs. “There was a time when I was on the top of the world and nowâ¦now I'm nothing more than deadweight.”

“Mrs. Deveraux, you can still have a full life.”

Jessie Belle shook her head. “Helen, I chose to harden my heart and betray the people I loved the most, and now I have to suffer the consequences. Although nobody has said itâI know they feel the same way I do. They think I'm reaping exactly what I sowed.”

“Nobody's thinking that, Mrs. Deveraux,” Helen countered. “You are a real sweet lady. I can see that.”

Shaking her head, Jessie Belle stated, “You didn't know me back then. I was a terrible person.”

Helen raised her eyebrows in surprise. “Oh, Mrs. Deveraux, I can't believe that. You're just going through a little depression right now.”

“It's true, Helen,” she insisted. “Do you know what they used to call me?
Jezebel
. People called me a Jezebel.”

“But why? I don't believe you'd ever cheat on your husband.”

“Jezebel was a powerful queen when she was alive, but hardly anything remained of her after her death. It wasn't about sex for herâit was power and control. She was tossed over a balcony for her many sins, trampled by horses and eaten by dogs. Did you know that there's a Jezebel spirit?”

When Helen shook her head no, Jessie Belle continued. “There is. Anyone who worships money, earthly treasures or power is vulnerable to this spirit. I should know, because it consumed me and at the time I didn't care. It took nearly losing my husband and my son to motivate a change in me, but by then a lot of people had been hurtâa lot of damage done.” She gulped hard, fighting back more tears.

“If I'm to be honestâJezebel and I had a lot in common. Oh, I was really somethingâa force to be reckoned with, for sure. Helen, all I cared about was what I wanted. Back then, I didn't care who I stepped on,” Jessie Belle murmured. She paused a moment before adding, “The person that pushed me over the balconyâI don't blame them.”

Her nurse sat there, stunned by what Jessie Belle was saying.

“You wouldn't have liked me, Helen.” Jessie Belle suddenly felt the urge to bare her soul. “My mama used to say all the time to tell the truth and shame the devil. That's what I'm about to do. It all started when I was eighteen years oldâ¦.”

Love and Demotion by Logan Belle
Jake's Biggest Risk (Those Hollister Boys) by Julianna Morris
A Kiss of Revenge (Entangled Ignite) by Damschroder, Natalie
Bella's Christmas Bake Off by Sue Watson
Purebred by Patricia Rosemoor
Adam's Promise by Julianne MacLean
Dark Valley Destiny by Unknown
Tinder Stricken by Heidi C. Vlach
The Pleasure Quartet by Vina Jackson
The Other Side of the World by Jay Neugeboren