Read Keeper of the Light Online 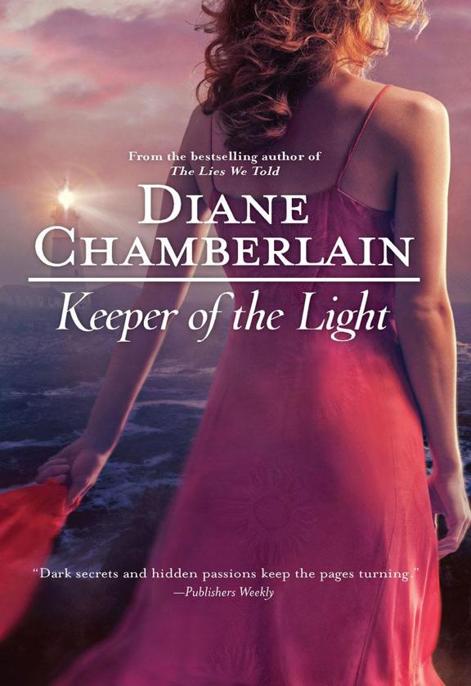 THE LIES WE TOLD

SECRETS SHE LEFT BEHIND

THE SECRET LIFE OF CEECEE WILKES

THE BAY AT MIDNIGHT

KEEPER OF THE LIGHT

I’m so pleased that
Keeper of the Light
is once again available for you to enjoy. Originally published in 1992,
Keeper
quickly became one of my most popular books—so popular that readers pleaded with me to write a sequel. I finally did so eleven years later, turning the story of the O’Neill family into a trilogy. The second book,
Kiss River,
will be reissued later this year, and
Her Mother’s Shadow
next spring.

I took certain liberties with the geography of North Carolina’s Outer Banks to make room for Kiss River and its lighthouse. Kiss River and the people who love it are purely works of fiction, but the unique and beautiful Outer Banks are very real and hold a special place in my heart. I hope they will in yours, as well.

It rained the entire day. It rained with such force that the shrubs next to the emergency room parking lot lay flat to the ground and the new roof sprang a leak. One of the nurses set a bucket on the floor of the waiting room to catch the water, and within an hour the rain had filled it to the brim.

Olivia Simon watched the downpour through the broad windows of her office. The rain sapped her concentration, and the journal on her desk was still open to the article she’d started hours before. There was something unnatural about this rain. It sucked the oxygen from the air and made it hard to breathe, and it pounded above her head like marbles falling on a sheet of tin. Just when she thought she could no longer tolerate the noise, it stopped. In the silence, Olivia watched the sky turn light and shiny, like the inside of an eggshell. Then suddenly, it was snowing.

She walked into the reception area, where Kathy Brash and Lynn Wilkes had been playing pinochle for the last abysmally quiet two hours.

They lifted their rained-dazed eyes to hers, then turned their heads toward the windows.

“Unreal.” Lynn stood for a better look, her white coat scraping a few cards from the table.

“It’s beginning to be an annual tradition on the Outer Banks,” Kathy said. “Last Christmas we actually got snowed in.”

Olivia looked at her watch. Five-thirty. She couldn’t afford to get stuck here tonight.

Lynn took her seat again. “Want us to deal you in, Olivia?”

Olivia declined, and returned to her office. She couldn’t make herself join them tonight. She was too antsy, too preoccupied. She needed to get home.

She sat behind her desk and dialed her home number.

“Yeah, I know.” He sounded irritated. She was getting accustomed to the curt tone he used with her these days. “When are you getting out of there?”

“Soon. Just a half hour more.” She’d had no choice but to work today. Of the four emergency room physicians, she had the least seniority. She wished she could tell Paul that it had been worth her while coming in today, worth their being apart when, God knows, they needed the time together. But all she had seen in eleven long hours was a scraped knee and a case of severe post-turkey indigestion. On days like this, she found herself missing the chaos of Washington General, where she’d worked for the past ten years, where her seniority had given her some control over her schedule. It scared her these days, being away from Paul. When she wasn’t close enough to touch him, she was afraid he might disappear.

They’d spent last Christmas with his family in Philadelphia. Paul had written a poem about her and stitched it into a sampler sometime during the long hours she was at work and he was not. The sampler hung in the study, and now each time she looked at it she wondered how the warmth Paul had felt for her one short year ago could have disintegrated so quickly.

“Turkey’s falling off the bone,” he said now. “Should I take it out?”

Olivia started to answer, but just then the police radio in the hall outside her office coughed to life.

“Hold on, Paul.” She held the receiver away from her ear and listened as Kathy sat down in front of the radio.

“We’ve got a gunshot wound to the chest.” A male voice broke through the static. “Female. Mid to late thirties. Pulse one-fifty and thready. B.P. seventy-five over forty.”

Olivia stood up. “Paul, I’ve got to go.” She hung up the phone and raced to the treatment room. “Call Jonathan,” she said as she passed Kathy. Jonathan Cramer was not Olivia’s favorite physician to work with, but he was the back-up physician tonight and he lived closest. He could be here in seconds.

She was soaping her hands and wrists at the treatment room sink when Jonathan arrived. “Gunshot, huh?” he said as he rolled his shirtsleeves over his beefy forearms. “We’ll stabilize her and fly her up to Emerson.”

Olivia turned on the EKG monitor. “We haven’t even seen her yet.”

Olivia began setting up the intubation tray. Jonathan had last worked in a sleepy Louisiana hospital. Gunshot wounds were probably not his area of greatest confidence. He had been here a little over a year, the first physician hired by the new free-standing emergency room, the only emergency facility serving North Carolina’s Outer Banks. She’d been told she’d be on an equal plane with him, with equal say in all decisions made. Yet she often wondered if someone had neglected to pass that information on to Jonathan.

They had the treatment room ready by the time the two paramedics wheeled the woman into the ER. Her shirt and bra had been cut off. The bullet hole in her left breast was deceptively small and bloodless. That could mean only one thing—the bullet had penetrated the heart. Olivia felt a rush of adrenaline. Surgery was the only possible course of action and they had no time to waste.

“Get the surgical tray,” she said to Kathy.

“What?”
Jonathan was helping one of the paramedics fit the inflatable MAST trousers on the woman’s legs. “Forget it, Olivia. Let’s get her out of here and up to Emerson.”

“Get me two units of O-negative packed cells,” she said to Lynn as she checked the woman’s vital signs. It would take the helicopter forty minutes to fly her to Emerson, probably longer in the snow, and at least another fifteen minutes before she could get into surgery.

Kathy produced the surgical tray. The instruments rattled against one another in her trembling hands. She had pinned her dark hair up, and Olivia wished she’d thought to do the same. Her fine brown hair was a little longer than chin-length, and each time she lowered her head it slipped forward, like blinders.

“You can’t be serious,” Jonathan said. “We’re not set up for anything like this.”

“Fifty over thirty,” Lynn said. “I can’t get a radial pulse.”

“Olivia, this isn’t the goddamned District of Columbia. She needs a trauma unit.”

“Start a bicarb bolus,” she said to Lynn. “And epinephrine. And get that blood hung.” Then she turned to Jonathan. “Look. We can ship her up to Emerson and you and I both know she’ll die on the way. Working on her here might not be ideal, but it’s the only chance she has.” She turned back to the table and did the cut-down herself, slipping the scalpel into the blue vein in the woman’s groin. She picked up the large bore needle.

“I can do it.” Kathy took the needle from her and fit it into the vein. Her hands no longer trembled and Olivia admired her for getting her fear under control so quickly.

Jonathan glowered at her. “I won’t be a part of this. I’m calling the helicopter.” He turned on his heel and walked out of the room.

Olivia stared after him, dumbfounded. “I don’t believe it.” She turned to one of the paramedics. “Call Dr. Shelley,” she said. “Tell him to get over here stat.” She began swabbing Betadine on the woman’s chest and side. Then she slipped her hands into the sterile gloves Lynn held out to her.

“Maybe we
should
send her up,” Lynn said quietly. Perspiration glowed on her forehead.

“We’re going to do our best for her, Lynn.” Olivia picked up a second scalpel from the tray and noticed the tremor in her own hand. She was suddenly aware of being the only physician in the room.
Steady, come on, steady.
She set the scalpel between the woman’s ribs and felt all her concentration flow into the task ahead of her. She bore down. No blood at all. She cut deeper, through the layers of muscle, until she reached the heart cavity. Blood suddenly gushed from the wound she’d created. It poured down the front of her scrubs and onto the floor, and the paramedic standing nearest her let out a moan.

Traveller's Refuge by Anny Cook
Seeds: Volume Two by Kin, M.M.
Love, Chloe by Alessandra Torre
No Angel by Helen Keeble
Donners of the Dead by Karina Halle
The Impure Schoolgirl by Pussy-Willow Penn
Run by Kody Keplinger
Lyon's Bride: The Chattan Curse by Maxwell, Cathy
Archangel Down: Archangel Project. Book One by C. Gockel
Diary of a Mistress by Miasha