Read Kill Chain: The Rise of the High-Tech Assassins Online

Kill Chain: The Rise of the High-Tech Assassins 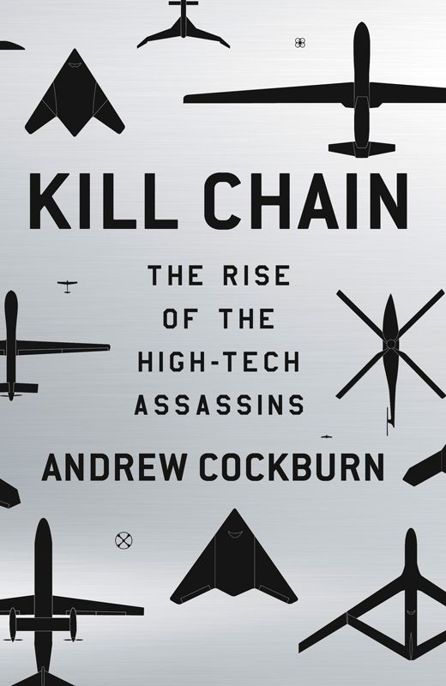 For Declan and Otis

This book has been made possible by the insights and advice of many people. To name them all would be impossible, and, in the case of some, unwise. However, I must express heartfelt thanks to my agent, Anna Stein, for her unfailing encouragement and support, and to my editor, Serena Jones, who grasped the idea of this book immediately and thereafter provided a deft editorial touch and sound advice. Ellen Rosenbush and James Marcus at
Harper’s
magazine kindly allowed their Washington editor to disappear for several months. Noga Malkin and Michael Smallberg provided invaluable research at the shortest notice. Danijel Zezelj has my gratitude and admiration not only for the brilliance of his illustrations but the speed with which they were produced. Most of all, I thank Leslie Cockburn, once again my surest guide, supporter, and friend.

In a cold February dawn in 2010, two small SUVs and a four-door pickup truck headed down a dirt road in the mountains of southern Afghanistan. They had set out soon after midnight, traveling cross-country to reach Highway 1, the country’s principal paved road, which would lead them to Kandahar and north to Kabul. Crammed inside were more than thirty men, women, and children, four of them younger than six. Everyone knew one another, for they all came from the same cluster of mountain villages roughly two hundred miles southwest of Kabul. Many of the men, unemployed and destitute, were on their way to Iran in hopes of work. Others were shopkeepers heading to the capital to buy supplies, or students returning to school. The women carried turkeys, gifts for the relatives they would stay with in Kabul. A number were Hazaras, an ethnic minority of Shia Muslims whom the Taliban treated with unremitting cruelty whenever they had the opportunity. Now they were in western Uruzgan Province, Taliban country and therefore very dangerous for them, but they risked the shortcut because they were short on gas.

They met no other cars and little foot traffic; the world around them must have seemed empty. But it was not. Unbeknownst to them, they were being watched and their every movement—even the warmth from their bodies—transmitted across the globe. As the ramshackle vehicles—one of them kept breaking down and another blew a tire—clattered along, people they would never meet conferred across oceans and continents as to who they were, where they were going, what they were carrying, and whether they should live or die.

Unwittingly, the little group was driving toward an Operational Detachment Alpha, a U.S. Special Forces patrol dropped in with a supporting force of Afghan soldiers soon after midnight to attack the nearby village of Khod. Such raids were routine in Afghanistan, planned and executed by the semimythic Special Operations Command that specializes in the pursuit and elimination of “high-value targets.” Someone thought this operation important enough to give it the code name Operation Noble Justice.

Pilot of MQ-1 Predator, call sign Kirk 97: We are eyes on the first vehicle; observing to try and PID on the pax in the open; stand by for movement on the second.

The 27-foot-long Predator drone was circling at 14,000 feet. Below its belly protruded a “sensor” ball carrying a variety of cameras, including an infrared video that picked up the warmth thrown off by the vehicles and passengers 2.5 miles below. Almost in an instant—but not quite—the images flashed across the world to twin screens inside a metal box roughly the size of a shipping container at Creech Air Force Base in the Nevada desert. Facing the screens sat “Kirk 97,” a pilot guiding the drone by remote control. Beside him sat a sensor operator who guided the cameras and weapons-targeting laser. In another room nearby a third member of the crew, the mission intelligence coordinator, was watching the same video images.

The pictures had audiences elsewhere. Hurlburt Air Force Base in the Florida Panhandle is headquarters of Air Force Special Operations Command and home to one station of the vast but little-known global network referred to as the Distributed Common Ground System (DCGS). This is the central nervous system funneling, collating, and sharing the unimaginable quantities of imagery and electronic information collected by air force drones and reconnaissance planes (ISR for Intelligence, Surveillance, and Reconnaissance) around the globe. In theory, anyone in any part of DCGS has access to any information that has been fed into the system, wherever they are.

Thus it was that the images captured by the Predator were being watched at Hurlburt by a dedicated team, a minibureaucracy of young men and women, each with specialized tasks. In overall charge was an intelligence tactical coordinator (ITC) supervising two “screeners.” The chief screener, a civilian on contract from SAIC, a major defense corporation heavily involved in drone operations, outranked the second screener, a junior air force officer who happened to be her husband. Also present were two full-motion video analysts (FMVs). While one FMV watched the screen, the other typed “products,” conclusions drawn from the imagery, which were then passed to the screeners for onward transmission via a system known as Internet Relay Chat to the mission intelligence coordinator sitting in his trailer in Nevada. A geospatial analyst tasked with generating relevant geographical information for the other analysts made up the complement.

The video had still more destinations. Special Operations, born in World War II as a term for agents sent behind enemy lines to train and lead friendly guerrillas, had by the twenty-first century ballooned into a 66,000-strong branch of the U.S. military, with an inevitably complex command arrangement. The little raiding party in Uruzgan that night was under the supervision of a Special Operations Task Force headquartered in Kandahar, which was naturally in receipt of the ubiquitous video, along with the written messages streaming back and forth between Nevada and Florida. Kandahar in turn answered to Combined Special Operations Task Force headquarters at Bagram, outside Kabul, where the video was also screening.

The ultimate beneficiary of all these complex arrangements was a sergeant attached to the raiding party. Known as a “joint terminal attack controller,” he was responsible for communicating via radio with any and all air support, including the Predator, and relaying orders and intelligence to and from the young captain commanding the party. Calling himself Jaguar 25, the sergeant was the force’s only link with the team in Nevada, which in turn was the sole link with the screeners in Florida.

Almost as soon as the raiding party disembarked from their helicopters shortly after midnight, someone out in the darkness had switched on a handheld radio and broadcast a general call to arms. “They are here,” he said, “let us get all the Mujaheddin together and defend this place.” It was a simple, uncomplicated exhortation addressed to no one in particular and audible to anyone with a radio, utterly unlike the assorted esoteric systems employed by the U.S. forces. Americans listening in were bemused by their enemy’s unconcern for eavesdropping, and indeed the Taliban summons—if that was what it was—was overheard by a host of U.S. military intelligence posts on the ground and in the air. Accordingly the word was passed to look out for enemy reinforcements. Two vehicles in tandem, the pickup and one SUV, lumbering into the area easily fit that picture, and suspicions hardened when they and another SUV flashed lights at each other before continuing on together in the direction of the patrol as it waited for daylight.

Mission intelligence controller: See if you can zoom in on that guy, ’cos he’s like …

Pilot: What did he just leave there? Is that a fucking rifle?

Sensor: Maybe just a warm spot from where he’s been sitting.

Pilot: I was hoping we could make a rifle out. Never mind.

Sensor: The only way I’ve ever been able to see a rifle is if they move them around, when they’re holding them, with muzzle flashes out or slinging them across their shoulders.

Drone operators are not in immediate contact with the real world, literally, thanks to the phenomenon known as latency, a reference to the time it takes for information to make its way from the drone to a satellite twenty-two thousand miles up in space, down again to a ground station in Ramstein, Germany, switching to a fiber-optic cable through which it travels across western Europe, the Atlantic Ocean, and the continental United States, before reaching Nevada and the screen in the pilot’s trailer. As the electronic pulses are split, reunited, and buffered for assembly into packages pending their dispatch to the next way station, microsecond delays steadily accumulate. It means that the scene on a pilot’s screen is out of date, usually two seconds but sometimes as much as five seconds. As the crew reacts to what they are seeing, moving their controls to send an instruction to the aircraft they are “flying,” that signal in turn takes two to five seconds to deliver. This time lapse is why drone takeoffs and landings must be handled by a separate team of pilots stationed close to the runway so that they can see the planes they are flying in real time. Potential targets on the ground are aware of the delay: Yemeni members of al-Qaeda reported in 2011 that when they hear a drone overhead, they move around as much as possible.

Nor do the pictures themselves necessarily always bear close resemblance to the world as the rest of us see it and sometimes are “no better than looking at Google Earth through a straw,” as one veteran remarked of the plane’s “spotter TV” feature. Thus for most of the time the convoy was under watch, the sensor could only focus on two of the three vehicles at a time. If the operator zoomed out even slightly, the already imperfect resolution was lost. Imagery became even less precise if there was dust in the air, if the drone was too high, at dusk or dawn (when both infrared and daylight-use electro-optical cameras lose efficiency), or when the sensor operator could not focus properly. The video as received by troops on the ground that night in Uruzgan was even poorer, described by one as “crap, full of static and crackling.”

Out of the Mountain by Violet Chastain
Grimm - The Icy Touch by Shirley, John
Drone Wars 1: Day of the Drone by T. R. Harris
The Chalet by Kojo Black
A Season for Love by Heather Graham
Breaktime by Aidan Chambers
A First Time for Everything by Ludwig, Kristina
Bride of the Alpha by Georgette St. Clair
by Unknown
The Winter's Tale by William Shakespeare