Knights of de Ware 02 - My Warrior 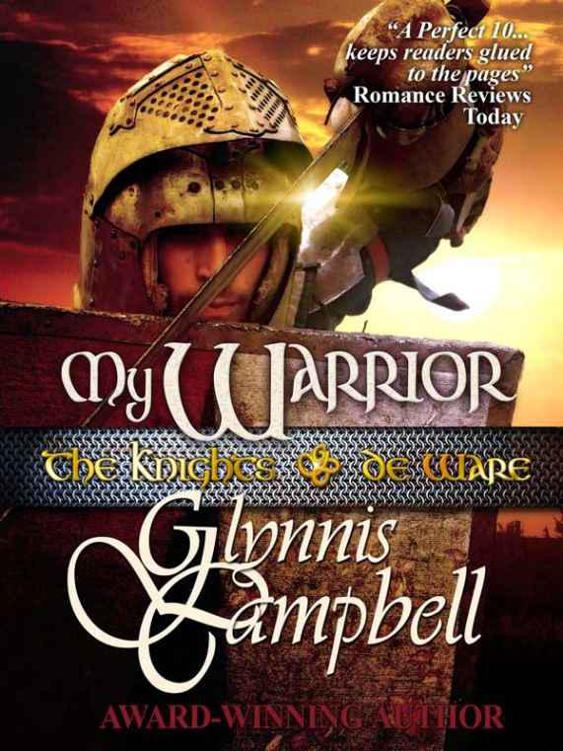 Table of Contents
A Wager of Love…

She was gaping at him. He recognized that look. He’d seen it before in the young lads who frequented the tiltyard, lads who worshiped him and would later weave overblown tales for their friends about the great Wolf de Ware and his mighty sword arm. But he’d never thought to see such reverence in Cambria’s eyes. It made his heart beat faster.

For a long while, she only gawked at him, awestruck. Then she said, “It’s true, isn’t it? You’ve never lost. You’ve never met your match.”

“On the contrary, madam. I believe I
have
at long last met my match.”

His blood was already heated from their skirmish, and to see such naked admiration from his enemy,
this
enemy, fueled his desire.

“Lady,” he said in a voice just above a whisper, “beware how you gaze upon me, lest I forget the limits of our wager.”

“Romance fans who crave action-filled historicals will relish reading about Cambria’s and Holden’s adventures as they battle their way to true love.”
—American Library Association
“Filled with dangerous battles and good historical backdrop, great characters to sink your teeth into, history and plenty of romance.”
—Romantic Times
“Holden and Cambria are a delightful duo struggling with betrayal, mistrust, and love. Glynnis Campbell entertains her audience with this exciting fourteenth century novel.”
—Harriet Klausner
“A Perfect 10…a medieval tale to keep you spellbound. Ms. Campbell keeps readers glued to the pages, leading them from one climactic scene to another all the way to the end of this entrancing story.”
—Romance Reviews Today
“Glynnis Campbell, a born storyteller, pulls out all the stops in her second book…this reader scores
My Warrior
with an A.”
—Romance Authors & Readers

This work is a work of fiction. Names, places, characters and incidents are the product of the author’s imagination or are used fictitiously. Any resemblance to actual events, locales or persons, living or dead, is coincidental.
Copyright © 2001 by Glynnis Campbell
E-book Copyright © 2012 by Glynnis Campbell
Smashwords Edition
All rights reserved. No part of this book may be reproduced in any form or by any electronic or mechanical means, including information storage and retrieval systems, without permission in writing from the author, except by a reviewer who may quote brief passages in a review.
Book design and illustration by Richard Campbell
Glynnis Campbell – Publisher
P. O. Box 341144
Arleta, California 91331
ISBN-10: 1938114027
ISBN-13: 978-1-93811402-1
Contact:[email protected]

For my father,
who raised me on
King Arthur and Zorro,
Robin Hood and Black Bart,
and taught me how to
buckle a swash
Acknowledgments
With special thanks to
Helen and Cindy,
My sisters at OCC/RWA,
And women warriors everywhere

Holden de Ware stretched his long legs out toward the dying fire, stared up at the clear night sky salted with brilliant stars, and shook his head sadly. “We’ve lost him then?”

His half brother Garth nodded from his makeshift seat on a pine stump, gazing silently into his foamy cup of ale.

“Poor Duncan,” Holden continued. “It’s a wretched thing when a man falls to such a foe, to be cut down in his youth before he’s—“

“Oh, for the love of…” Sir Guy grumbled, spitting onto the coals so they crackled and hissed. “Your brother’s not dead. He’s only taken himself a wife, for God’s sake.” He continued muttering into his black beard and irritably took himself off to bed in one of the several pavilions of the encampment, leaving the two brothers alone.

“It’s easy for him to make little of it,” Holden confided to Garth. “He’s not a de Ware.” He picked up a long stick and poked distractedly at the embers. “A de Ware lives for the feel of a fine blade in his hand, a trusty steed between his legs, and the wind of adventure blowing through his hair.”

Garth had his own opinions about that, but said nothing, only sipping from his cup of ale.

“But a wife,” Holden said on a heavy sigh.

The brothers sat in silence while an owl hooted from the wood and one of Holden’s retinue coughed in his sleep.

“
You
know what I mean, don’t you?” Holden said, turning toward his younger brother with new respect. “The holy orders have it right. You’ve managed to avoid entanglements of the heart altogether, what with your priestly pursuits. You’ve stayed chaste and true, and look what you’ve achieved.”

Garth paused with his cup halfway to his lips and looked over at Holden as if questioning that himself.

Holden cuffed him companionably on the shoulder. “Come now, brother. You are indisputably the most learned lad in our father’s household. Do you honestly think you could have attained half as much if your heart were enslaved to a woman?”

Garth lowered his cup and dropped his gaze, staring into the glow of the fire, his eyes uncharacteristically moody tonight, much like their father’s. “Then why am I not content?”

Holden leaned forward in surprise. Garth was a man of few words. When he spoke, it was usually significant. “You’re not content?”

Garth frowned, gathering his thoughts. “Not as content as I think I should be.”

Holden stroked his chin, rough now with a day’s growth of beard. “How so?”

Garth set his cup on the ground and rested his elbows on his spread knees. “At Duncan’s wedding feast…” He clasped his hands before him as if to pray, a gesture that was habit with him now. “When his bride sat beside him, there was something in his eyes. A light. Warmth? Calmness? Joy? I’m not certain. But it transformed him. And I knew in that moment that no matter how many rousing sermons I delivered, no matter how many psalms I copied or how many souls I shrived, I would never feel that.”

Holden whistled out a weighty breath. He’d had no idea. Garth had always been so solemn, so busy with his studies, so reluctant to join his older brothers in their battle sport. It was almost as if none of the de Ware blood flowed through his veins, as if he were cut of different cloth than Duncan and him, who would sooner strut about without their breeches than without their swords. But now, what he was hearing…

Holden ran his fingers through his mussed hair and glanced at Garth from the corner of his eye, entertaining a daring possibility. He’d lost Duncan. But perhaps it wasn’t too late for his little half brother. Perhaps he could rescue Garth from his saintly doom and introduce him to the heady pleasures of life and freedom and an open road.

“Garth!” he said, clapping the lad on the knee and nearly startling him from his perch. “Travel with me.”

“Join my retinue. Edward can use another sword arm, if yours hasn’t gone to rust.” He rubbed his hands together. The more he thought about it, the better it sounded. “Travel on campaign with me. Taste life. See the countryside.” He laughed. “Tame wenches and slay dragons.”

“Pah! Do you think they’ll add a new book to the Bible while you’re away?”

Garth’s brow looked troubled, but there was a spark in his eyes now, a spark that hadn’t been there a moment ago.

Garth chewed his lip in indecision.

“If I don’t have your blood coursing and fire in your eye after this campaign,” Holden promised, “you can go back home to your books.” He stood and extended his right arm toward Garth. “What do you say, Garth? Aye or nay?”

After long consideration, Garth came to his feet and solemnly offered his hand. “Aye.”

“Good.” They clasped forearms. “I’ll teach you everything I know,” Holden promised, wrapping an arm around Garth’s shoulders as they ambled toward the serge tents. “How to conquer fear, how to inspire loyalty, how to rule men with an iron hand and a just heart, how to seduce wenches, how to besiege castles…”

Garth stopped in his tracks and looked dubiously up at Holden.

“Aye, even that,” he vowed. “It’s not as difficult as you’d imagine, lad. Indeed, most of them are more than willing to surrender. One knock at their barbican and the drawbridge comes winding down. They change masters as often as the moon changes its face, and they’re easily won.” He gazed dreamily off into the night. “Others are untouchable, flawlessly constructed. They’ll never be possessed. Such perfection you must be content to gaze upon from afar.” He thumped Garth on the chest. “Now the most challenging and rewarding conquest is the one that puts up a good fight. You win, of course. De Wares always win. But the taste of victory is so much sweeter when… What?”

Garth was staring at him as if he were addled in the head. “This will be my first campaign. I don’t think I’ll be besieging many castles.”

“Besieging castles”? Holden said, chuckling. “Who’s talking about besieging castles?” He hauled Garth off with him toward the pavilions. “I’m speaking of seducing women.”

A brindled rabbit sat up on its haunches, sniffing warily at the cold, crisp air. The sun caressed a leaf here and there, steaming the moisture from the mossy trees. The sparrows had yet to rise, and an owl flew home on soundless wings. For a moment, the irresistible scent of tender green shoots beckoned from a nearby meadow. But then a faint, unfamiliar odor wafted by. The rabbit froze.

The silence of the morning was broken abruptly by the sharp whisper of an arrow slicing neatly through the mist to embed itself in the damp earth. In a flurry of leaves, the rabbit scampered away into the brake, more startled by the loud oath that rent the air than by the wayward shaft.

“Damn him! Damn that brainless ox of a fletcher!”

The hunter’s azure eyes, as bright as a Highland stream, narrowed in disgust as the rabbit made its escape.

The ash longbow, flung in anger, bounced upon the ground, followed by the quiver of ill-fletched arrows that spilled out over well-worn leather boots. In a sweep of russet brown, the hunter’s cloak swirled like a storm cloud. The hood fell back, spilling out long chestnut hair burnished red-gold by the early sunlight.