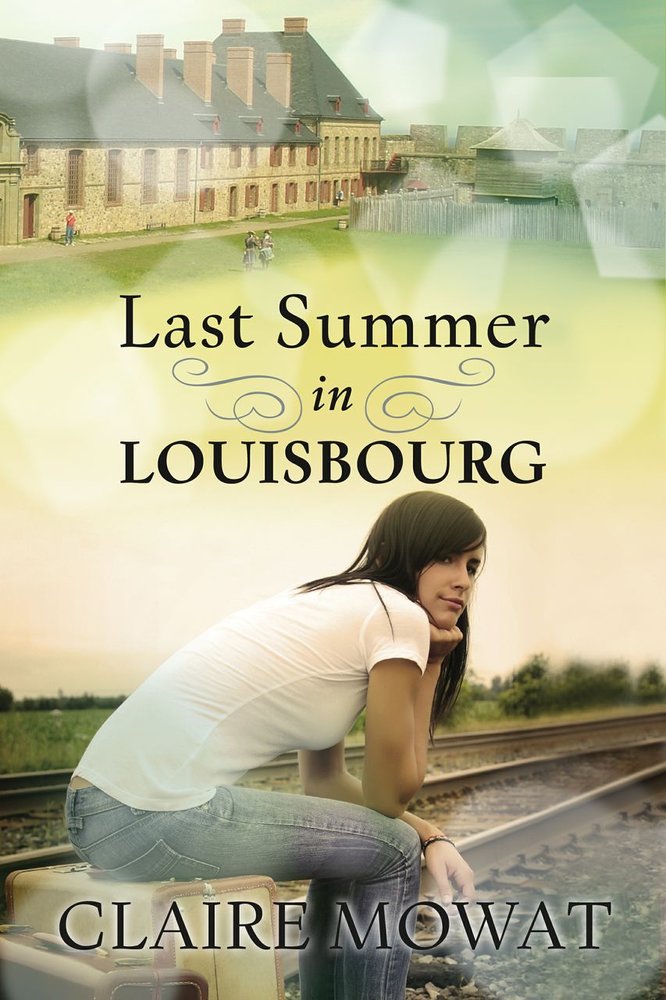 All rights reserved. No part of this book may be reproduced, stored in a retrieval system or transmitted in any form or by any means without the prior written permission from the publisher, or, in the case of photocopying or other reprographic copying, permission from Access Copyright, 1 Yonge Street, Suite 1900, Toronto, Ontario M5E 1E5.

This novel is a work of fiction. Names, characters, places, and incidents are either the product of the author's imagination or are used fictitiously.

Nimbus Publishing acknowledges the financial support for its publishing activities from the Government of Canada through the Canada Book Fund (CBF) and the Canada Council for the Arts, and from the Province of Nova Scotia through the Department of Communities, Culture, and Heritage.

“I won!” Andrea shrieked the instant she hung up the phone. “I won! I won!” Overjoyed, she galloped down the stairs in her worn-out jeans and sweatshirt and bare feet. She didn't bother to comb her hair. There actually were occasions when it didn't matter what you looked like, and this was one of them.

“What is going on?” her mother called from the small room beside the kitchen, where she worked at her desk most evenings. She was a teacher, and she had lessons to prepare and papers to mark.

“Mom! You're never going to believe this.” Andrea panted as she rushed into the room.

“Calm down. Believe what, sweetie?”

“That contest. Remember? I wrote a history essay and my teacher, Mrs. Greenberg, entered it in that contest for students.”

“And you won?” her mother asked incredulously.

“Fantastic!” her mother cried, and hugged her daughter. “To tell the truth, I'd forgotten all about that contest.”

“Me too. Well, almost. Actually, I'm not the only winner. There's one from each province and territory. I won the Ontario prize.”

“Wait till we tell Brad,” exclaimed her mother joyfully. “He'll be so proud of you.”

Brad was down in the basement installing a workshop, a place where he could fiddle around with his power tools. He loved fixing things. Brad was Andrea's stepfather. He was okay, but he could never replace her real father, who had died when Andrea was a little girl. Her mother had married Brad a year and a half earlier and that had abruptly changed their lives. When Andrea and her mother lived in an apartment by themselves, life had been a lot simpler. She didn't have to share her mother with anyone. It was nice that Brad could fix faulty toasters and broken porch railings. If only he wasn't always barging into their lives with his own complicated plans.

Brad emerged from the basement with wood shavings clinging to his T-shirt and dust coating his glasses. He grinned when he heard the news. “Terrific, kiddo! Naturally we knew all along you were going to winâ¦didn't we, honey?” He winked at Andrea's mother.

“Now let me see,” pondered Brad. “What about a gilt-edged, leather-bound edition of
The Life of Sir John A. Macdonald
?”

“Yuck,” said Andrea. “Better than that.”

“I thought you liked Sir John A. Macdonald. I thought he was one of your heroes,” said her mother.

Andrea Baxter and Canada's first prime minister had both been born on January the eleventhâabout a century and a half apart. It was a rotten time of the year to have a birthday, Andrea had often complained. Always freezing cold, it was too soon after Christmas and New Year's for anyone to think about presents and parties again. The only good thing was that the principal of Willow Drive School always called an assembly to celebrate Sir John A.'s birthday and inevitably Andrea got some spin-off attention since it was her birthday too. She kept hoping the Canadian government would declare the day a national holiday, but so far that hadn't happened.

“I didn't write about Sir John A. Macdonald. I wrote aboutâ¦don't you remember?”

Her mother thought for a moment. “Ah, yes, the Battle of the Plains of Abraham. I read it over before you submitted it. It was first-rate.”

“So the prize has to be a trip to the Plains of Abraham, right?” Brad queried.

“You're close. It's a trip. But even better than that.”

“Better? How?” asked her mother.

“Farther away is better, is it?”

“I don't mean that. It's just that I always wanted to visit this place. There were pictures of it in a book at school. You see, the prize for each winner is a summer job with Parks Canada. The man who phoned to tell me I won asked me if I had a preferenceâlike, did I want to see the Rocky Mountains or Quebec or Saskatchewan or whatever. So I told him I was born on the East Coast and I liked it there. He asked me if I spoke any French, and I told him I'd been in an immersion class for years and it was no problem. So he suggested the Fortress of Louisbourg on Cape Breton Island. And I said that would be awesome!”

“Right, Mom. They have an incredible fortress there. It's an entire town that's been rebuilt just like the old days. It's something like Upper Canada Village, only bigger, and this one is French, and you get to wear old-fashioned clothes if you work there. Oh, I can hardly wait!” Andrea cried.

“You're going to spend an entire summer inâ¦Louisbourg.” There was no enthusiasm in her mother's voice. “It'sâ¦it'sâ¦so far away.”

“Mu-um,” grumbled Andrea, in the tone of voice she always used when she was fed up. “It isn't as far away as Newfoundland, and I've been there lots of times visiting our relatives.”

“You don't have any aunts or uncles or cousins in Cape Breton, though, and Newfoundland and Cape Breton Island are not all that close together. I'm just concerned you might beâ¦well, lonely if you go.”

“
If
I go. What do you mean, âif'? I already told them that I would take the job, that I really, really wanted to be there,” Andrea protested.

“I'd certainly like more details about it,” her mother insisted. “What if you run into difficulties? What if there are problems?”

“Mu-um! For Pete's sake! There won't be any problems. They said they'd arrange for a place for me to stay and everything. This is a job in a million. I absolutely have to go,” Andrea pleaded.

“You earned it, kiddo, you really did.” Brad chimed in. His wife shot him a dark look that said he had better keep out of this.

Andrea was surprisedâand pleasedâthat he had spoken up on her behalf. Sometimes, she grudgingly acknowledged, Brad could be almost human, and she did have to admit that he had managed to make her mother a happier person than she had been. But he was always trying to change things. It had been his idea that they move out of their perfectly nice apartment in the Toronto suburb of Willowdale. Now they lived in a brick house in Trillium Woods, a far-too-small town beyond the boundary of Metropolitan Toronto. Out there everything seemed so far awayâthe mall, the new school she attended, the fitness centre where she swam, and, of course, Suzy, her best friend, whom she had had to leave behind in Willowdale. Now when she wanted to go anywhere she had to get her mom or Brad to drive her to the train station. As far as she could judge, nothing even vaguely interesting ever happened in Trillium Woods. Andrea was dying to get out of the place.

“Andrea,” said her mother in the ultra-serious tone of voice she reserved for heavy discussions. “I know you deserve this prize. But it is a long way from home and you are only fifteen years old, and I need to know a few things before you go there all by yourself. I'll give Mrs. Greenberg a call. And I'd like to know the name of whoever is in charge of things at Parks Canada. Also, I want you to think it over for a few days. It might turn out you don't really want to go.”

“
Mu-um
! How can you even think that? Of course I want to go. Where else am I going to find a summer job, anyway?” Andrea groaned. What was all the fuss about? Last year her mother had gone off to Africa to teach school for six months, sending Andrea to Newfoundland to stay with her aunt and uncle. Her mother had always been proud of her own adventurous spirit. She said it ran in the family, and Andrea had it too. Now, all of a sudden, she was acting as if Andrea was a baby who couldn't look after herself.

“It's getting late and there's school tomorrow,” her mother declared flatly, but added in her normal, kindly voice, “I know you're very excited, sweetheart, and truly it is wonderful news that you won this prize. You probably don't feel like sleeping but do try. I imagine tomorrow will turn out to be a very exciting day at school for you.”

“Oh, Mom,” Andrea grumbled, even as she gave her mother a goodnight hug and headed upstairs to her room.

“This proves conclusively, as we should already know, that war is a terrible thing. This battle should never, never have been fought. Nobody won. In the long run it didn't prove very much. There was plenty of space for everyone, as things turned out. General Wolfe and General Montcalm both died horrible deaths”
âhere Andrea paused dramatically as she emphasized the words “horrible deaths”
â“and so did many fine young soldiers. But worse than that,”
she continued passionately,
“it meant that there would be a legacy of bad will between the French and the English in Canada for many, many years to come. If that dreadful battle had never occurred, then we could have worked out our differences and lived together more harmoniously.

“In conclusion, I would like to say that war and battles are a waste of lives, time, and money. People should always sit down together and talk it over and work things out. That way the world would be a better place.

“Thank you very much.”

Andrea sat down. Everyone in the assembly room clapped as she finished reading her prizewinning essay. She could feel her face turning the same shade of Desert Rose as her nail polish. She fidgeted in her chair and focused on the braided silver ring on her finger.

When the applause died down, Mrs. Greenberg, the teacher who had submitted her essay to the contest, stood up. She told the audience how proud the school was that one of their students had won this important prize. She announced that Andrea Baxter would be leaving in June to spend the summer working at the Fortress of Louisbourg on Cape Breton Island, Nova Scotia.

There was a moan of envy from her classmates. They were all hoping to get summer jobsâanywhere.

Mrs. Greenberg went on to remind the students that there were a lot of books in the library about Canadian history. There would be another contest next year. It would be a good idea to begin preparing for it right away, as Andrea obviously had.

“Remember, it wasn't a matter of mere luck that Andrea won this contest. It was due to the effort she brought to the task,” Mrs. Greenberg concluded.

Andrea squirmed and stared into the middle distance. She knew what the other kids would think of that. To her relief the bell rang. Assembly was over. Everyone got to their feet and shuffled noisily out of the auditorium.