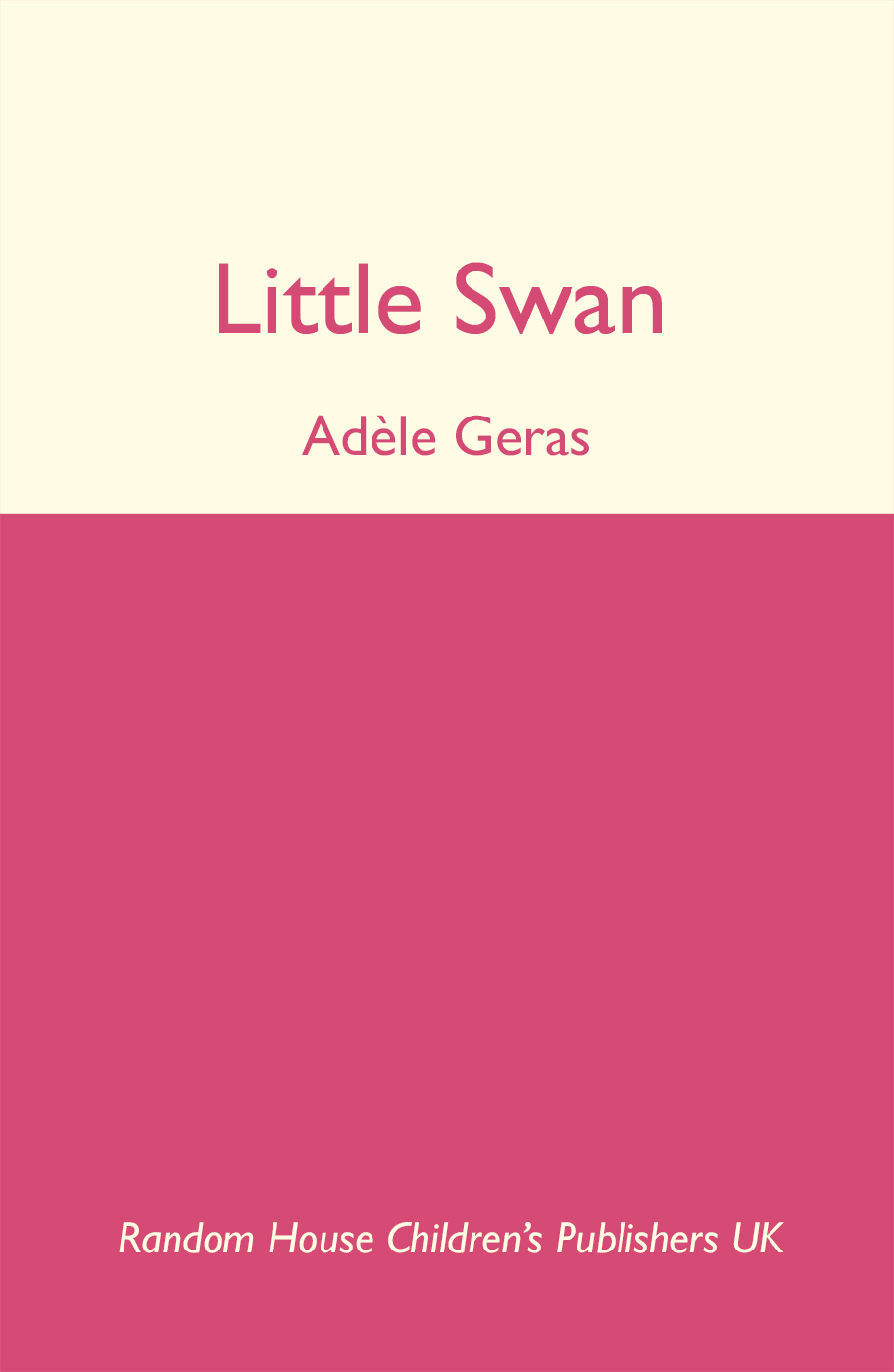 Louisa (known as Weezer) is determined to become a ballet dancer. She starts lessons locally and with her typical self-assuredness, soon sees herself in the role of class-star. So when it comes to putting on a performance, Weezer knows there’s only one place for her – prima ballerina or bust! 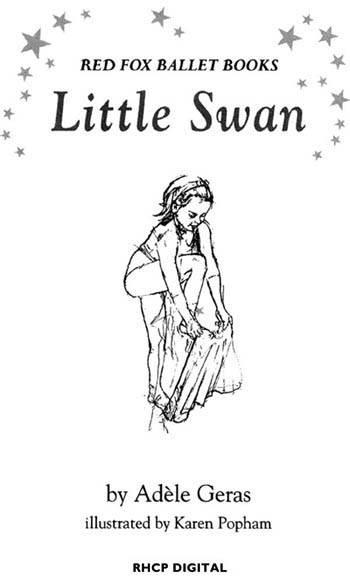 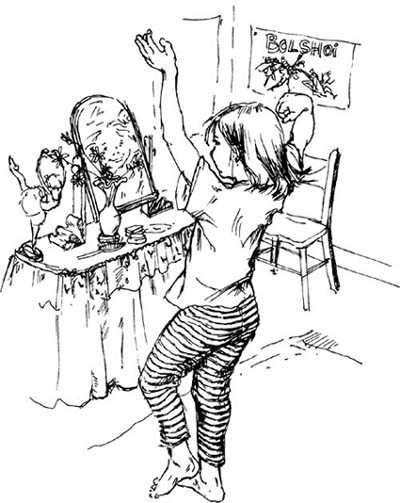 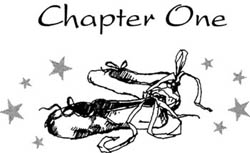 MY NAME IS
Annie. I’m ten years old. Weezer, my little sister, is seven. Her real name is Louisa, but nobody calls her that. About six months ago, she started nagging our mother. Weezer is an excellent nagger. She never stops. She wanted to go to ballet classes. So at every meal, she tried a different kind of nagging.

“Some of my friends started going in the First Year.” (That was one kind.)

“It’s not very expensive.” (That was another kind.)

“St Christopher’s Hall is so close. I could walk there by myself.” (That was a third.)

We were in the middle of breakfast. Mum said, “No, you couldn’t. You have to cross three main roads. You know you’re always in a dream.”

“I suppose so,” I answered. It’s best to agree with Weezer. She can stay in a terrible mood for days and days if you don’t. Once, her friends Tricia and Maisie were playing Kings and Queens. Weezer wanted to be the queen, but the others decided she should be the princess.

“It was my turn,” she told me. “I was princess last time.” She sulked about it for three days, and in the end Maisie said she didn’t mind being princess for the next four games, and Weezer could be queen if she liked.

Mum must have realized that Weezer was never going to stop nagging. She sighed.

“OK,” she said. “I give in. You can start next week. We’ll have to buy everything you need.”

“Finish your toast first,” Mum said. But she was too late. Weezer had rushed out of the room. We could hear her clattering up the stairs. I ate the piece of buttered toast she’d left behind. I knew she wouldn’t eat it now. Her dream was about to come true. I couldn’t believe my bratty little sister was about to become a ballet dancer.

Weezer laid all her new equipment on the bed.

“Look, Annie,” she said. “Isn’t it lovely?” I looked. I saw two pink leotards, two pairs of pink ballet shoes, a white cardigan, and a small pink suitcase. The suitcase had a picture on the lid. It was painted in gold and showed a ballerina standing on her points.

“Very nice,” I said. I didn’t think the stuff was anything to get excited about. But Weezer had other ideas. She was determined to make me see how wonderful each item was.

“These shoes are real leather, Annie. Feel how soft they are. They’re real ballet shoes, even though they’re not toe shoes. You aren’t allowed to go on your points. Not till you’re twelve. But the ribbons are satin. There’s a special way to tie them. And I have to have my hair done up in a net. Have you seen my hair net, Annie?” 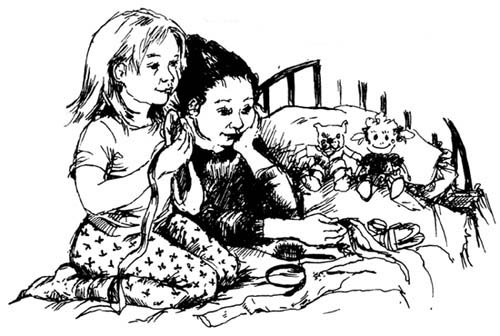 “This is it. And this is my cardigan. It crosses over and ties at the back.” She started jumping up and down.

“Lovely,” I said. “But why is everything spread out on the bed?”

“I’m going to pack my case,” said Weezer. “Isn’t it a beautiful case? Don’t you like this ballerina on the lid? I’m going to look just like this when I grow up.”

Weezer threw her hairbrush at me. She’s a good thrower. It’s time she learned when I’m joking.

At last, the day came. In case we had forgotten, Weezer reminded us.

“It’s the first class today,” she said. She put a spoonful of dry cereal into her mouth. She was so excited she’d forgotten all about milk.

I passed the milk jug to her and said, “We’re not going till four o’clock. Your pink suitcase is by the front door already.”

“I put it there last night,” said Weezer, “in case I forgot this morning.”

“Have you remembered to pack everything?” Mum asked.

I sighed. Perhaps now that Weezer was finally starting classes, we could take down the list she’d put up in our bedroom. She’d stuck it on the dressing-table mirror – right in the middle so that you couldn’t see your whole face at once. After a few days, I knew that list by heart. 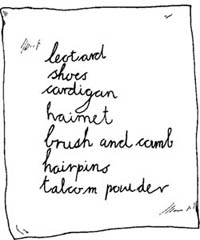 Everything was now safely shut up in the suitcase.

“Don’t be late home from school today, Annie,” said Weezer firmly. “Remember you’re taking me. We have to leave at four o’clock exactly.”

I wasn’t late, but Weezer made me drink my
milk at top speed. She’d changed her mind. We would leave, she told me, at ten to four.

“The traffic may be very busy. There might be an accident. We might have to go the long way around.” Weezer has a very vivid imagination. I swallowed the last drop of milk and took a biscuit to eat on the way. Sometimes, I just had to listen to Weezer. She would only walk out of the house on her own if I wasn’t ready.

There are twenty girls and five boys in the junior ballet class. The teacher, Miss Matting, is a thin, pale woman with a lot of blonde hair done up in a bun on top of her head. One whole wall of the room is a mirror. All the children lined up at the barre along this wall for their exercises. I sat on a bench and watched.

Weezer stood between two girls from her class at school. I never realized how much she already knew about ballet. She knew the five foot positions and a few of the basic exercises. I had seen Tricia and Maisie teaching her in the playground. Also, for her last birthday, Mum
had given her a book full of beautiful photographs of ballerinas and Weezer had looked at it very carefully every day. Miss Matting brought her out to the front to teach her how to curtsy properly.

“That’s good,” she said when Weezer had curtsied perfectly. “You’re naturally very graceful. I’m sure you’ll do well at ballet.” Weezer’s face was pink with pleasure. She looked at me, to make sure I’d heard. Tricia and Maisie looked proud that she’d done so well. Perhaps they’d been teaching her curtsies at school along with all the other things.

I heard one of the other girls whispering to her friend, “I bet she was at another class before she came here.” I felt proud of Weezer too.

While the class continued, I looked around the room. It has a very high ceiling and lots of long, narrow windows. The floor is made of polished wood. There is an upright piano in one corner, and the pianist is a plump, elderly lady who kept her hat on all through the class. The bunch of cherries she had pinned to it jumped about as she nodded her head in time to the music. Later on, Weezer told me her name is Mrs Standish.

At the end of the lesson, Miss Matting said, “Please sit down, children. I have an important announcement to make. We must start thinking about our annual show. We’re going to do some very interesting dances this year. I shall be watching you all closely, and in a few weeks’ time we will have auditions. Of course, everyone will have a chance to take part in the show,
but there is a special dance we’re going to do this year. I shall need four girl soloists. I’m sure you’ll all try to do your best.” 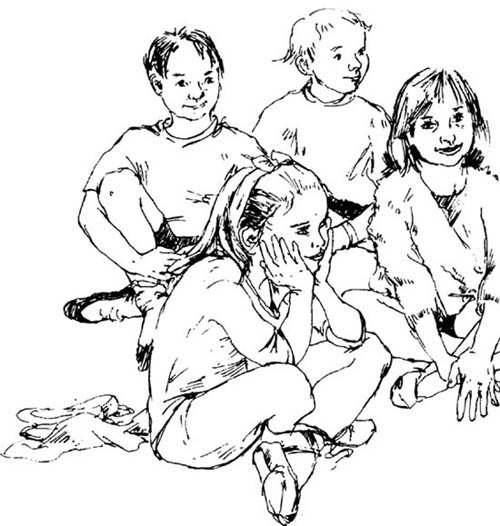